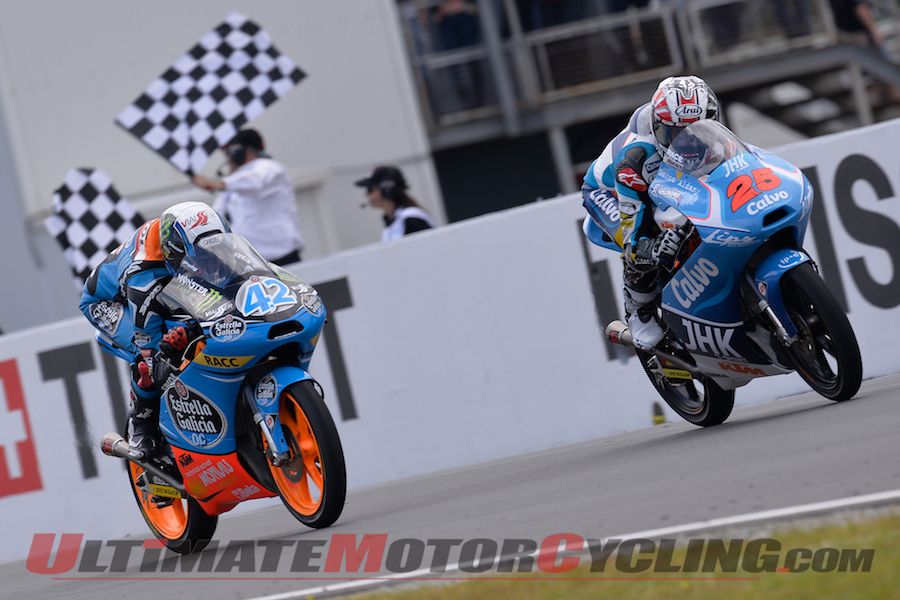 2013 Australian Grand Prix Moto3 ResultsSpoiler Alert: 2013 Moto3 results from Phillip Island listed belowAlex Rins has won a thrilling Moto3 Tissot Australian Grand Prix, coming out on top of a multiple-rider battle to beat Maverick Viñales by just three thousandths of a second.Both riders decreased the championship-leading advantage of pole-sitter Luis Salom, who completed the podium at Phillip Island.Rins’ latest victory of 2013 was surely his most dramatic to date, ensuring he has now matched Salom on six race wins this season, as well as having won three of the last four Grand Prix. Remarkably, the top seven riders were covered by just over one second, with Niccolo Antonelli only a further 1.1 in arrears.The majority of riders in the field found themselves in tight groups for the duration of the 23-lap race, affected by light rain on certain parts of the newly resurfaced circuit. Philipp Oettl (Interwetten Paddock Moto3) would fail to start due to engine problems and there were retirements for Francesco Bagnaia (San Carlo Team Italia) and Hyuga Watanabe (La Fonte Tascaracing), but no less than 30 riders managed the testing conditions to finish.A titanic battle at the forefront saw a selection of riders enjoying time in the lead, whereas Salom ran as low as seventh but looked to be making his customary climb to the very sharp end in the closing minutes of the race. However it was Mapfre Aspar Team Moto3’s Jonas Folger who stole the limelight as the final lap began, shooting into the lead at Doohan curve, only to run wide and drop to sixth three corners later.The run to line resulted in the closest finish so far this year in the World Championship, with Rins (Estrella Galicia 0,0) pipping Viñales (Team Calvo) after having both started on the second row of the grid. The winner now moves to within just five points of championship leader Salom (Red Bull KTM Ajo) with a pair of races remaining in Japan and Valencia, whereas Viñales is also in contention and 22 in arrears of the overall leader.Rins’ teammate Alex Marquez finished fourth, with the first group completed by local favourite Jack Miller (Caretta Technology – RTG), Folger, front-row starter Efren Vazquez (Mahindra Racing) and Antonelli (GO&FUN Gresini Moto3). Avant Tecno’s Niklas Ajo was a further 12.8 seconds behind and headed the second group, with Alexis Masbou rounding out the top ten for Ongetta-Rivacold. Mahindra’s Miguel Oliveira recovered to 26th spot and was fortunate to avoid injury after flying over his handlebars at the MG hairpin on the opening lap.2013 Phillip Island Moto3 Results:2013 Moto3 Championship Point Standings: