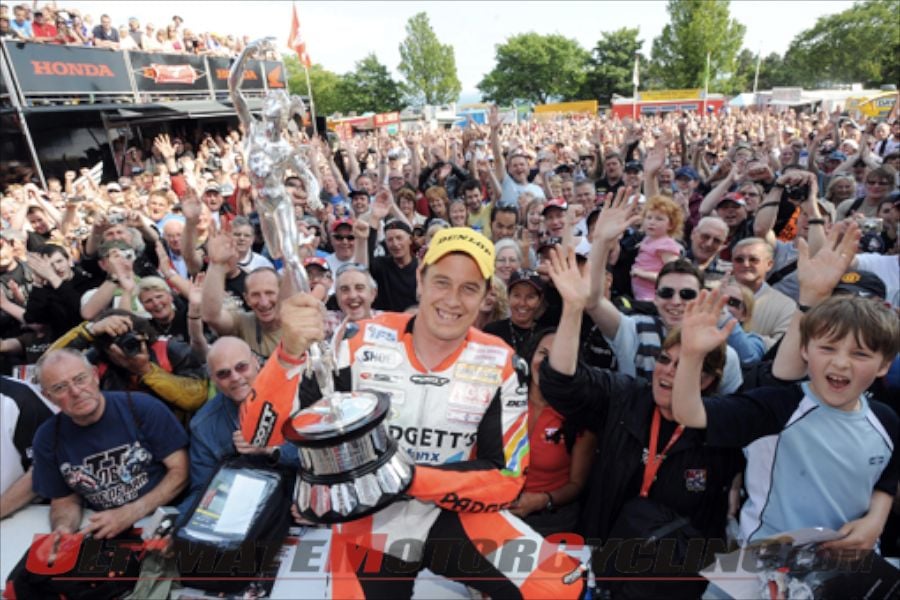 2013 QIPCO British Champions DayThe Department of Economic Development Motorsport team has negotiated for the Senior TT Trophy to feature in a prestigious one-day exhibition alongside some of the world’s most iconic sporting trophies.The exhibition, which will take place at Ascot on QIPCO British Champions Day on October 19, will also feature The FA Cup, The Ashes Urn, the Rugby League Challenge Cup and the Calcutta Cup.The Isle of Man TT trophy was donated to the Auto Cycle Club, now the Auto Cycle Union, by Joseph the Marquis de Mouzilly St Mars, the President of the Federation Internationale de Motocyclisme in 1905-1906. His name can still be seen on the award. The Senior TT Trophy was first presented, to Charlie Collier, in 1907 who won the first TT Race.The Senior Trophy was based on the Montague Trophy, awarded to the winner of the TT car races, which pre-dated the motorcycle TT, and was handed to the rider of the winning single cylinder machine.Standing 197 centimetres tall and weighs 59.5 kilograms, it features Mercury, the Winged God of the Messengers from Roman mythology, crafted in silver standing atop a winged wheel. The effigy is mounted on a tiered plinth featuring engraved shields detailing the winner of every Senior race.Past winners read like a who’s who of motorcycling including Geoff Duke, John Surtees, Mike Hailwood, Stanley Woods, Joey Dunlop and Giacomo Agostini. Current champion John McGuinness, who has won 20 TT Races, has won the Senior TT six times.Although insured for at least £1.5million, it is a priceless, unique part of the TT’s heritage. It is kept in the Isle of Man, under tight security provided by G4S Secure Solutions (Isle of Man) Limited, and will travel to Ascot with G4S’s Divisional Manager for Security Services Lloyd Mister. The Ascot exhibition will include other famous sporting trophies and mementos including the Jules Rimet Trophy won by the England football team in 1966, the Sid Waddell Trophy won by PDC World Darts Champion Phil Taylor in 2013, the World Snooker Championship Trophy won five times by Ronnie O’Sullivan, the European Player of the Year Award – The Ballon d’Or – won by Michael Owen in 2001, along with his Premier League Golden Boot awards and medals relating to the FA Cup, League Cup and UEFA Cup.The display will also include a number of prestigious trophies from the world of horse racing, including the Champion Jump Jockey Trophy won a record 18 times by AP McCoy, along with his BBC Sports Personality of the Year Award from 2010; the Champion Flat Jockey Trophy; the Champion Racehorse Trainer Trophies; nine of the most famous trophies won by Frankel during his unbeaten career; and the silver salver to be presented to the winner of the 2013 £1.3 million QIPCO Champion Stakes.The last time so many national sporting trophies were displayed together was over half a century ago at an exhibition in April 1956 at the Café Anglais, London.Michael Owen, the former Liverpool, Real Madrid, Newcastle United, Manchester United and England striker, who is now an ambassador for British Champions Series, said: “It’s a real honor to have my awards and mementos sitting alongside so many famous cups, trophies and decorations. It’s on these occasions that you really appreciate Great Britain’s amazing achievements in so many different sports.”Rod Street, chief executive of British Champions Series, added: “QIPCO British Champions Day has, in just two short years, become one of the world’s most important race days so it’s fitting that some of the most iconic trophies from other sports are on show alongside racing’s most coveted prizes.“Champions Day is one of the highlights of the autumn sporting calendar and the exhibition celebrates the sporting achievements of some of our greatest champions. We’re indebted to the organizations and individuals who’ve agreed to participate, ensuring that our Day is a true celebration of Great British sport.”