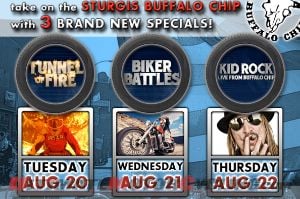 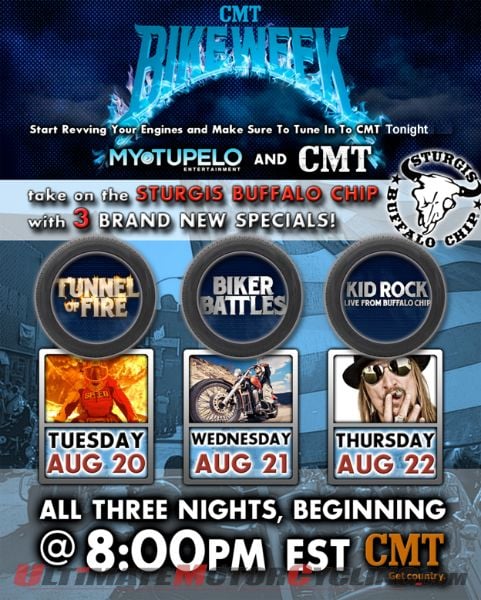 2013 Sturgis Motorcycle Rally on TVThe Sturgis Rally may have come to a close, but the memories will live on as Country Music Television (CMT) airs its first ever Bike Week, Aug. 18-24.CMT’s self-proclaimed “Seven Nights of Badass” features three different specials filmed at the Buffalo Chip’s 32nd annual Motorcycle and Music Festival. The 10 hours of bike-themed programming premiers nightly at 8 p.m. EDT/PDT.CMT Bike Week gives viewers an intimate look at the music, culture and camaraderie that make up the Largest Music Festival in Motorcycling. Cameras rolled throughout the week at the legendary Sturgis campground, capturing three separate world record attempts, numerous competitions and one unforgettable performance by American icon, Kid Rock.Specials filmed at the Sturgis Buffalo Chip include “Tunnel of Fire,” airing Tuesday, Aug. 20, which features numerous death-defying motorcycle stunts. See Clint Ewing’s attempt to travel through a 360-foot tunnel of fire, Patch McGillicutty’s ride around the circular Wall of Death and Juli Moody’s ability use her bare arms to hold together two motorcycles drag racing in opposite directions.CMT’S “Biker Battles,” which premiers Wednesday, Aug. 21, features many of the outrageous competitions that make the Buffalo Chip the Best Party Anywhere™. The show highlights the Buffalo Chip Tattoo Contest, Homemade Bikini Contest, Beauty & The Beast Bike Build and Body Paint Competition, Ultimate Burnout Contest and Motorcycle Hill Climb.“Kid Rock:  Live from Buffalo Chip” airs Thursday, Aug. 22, featuring the “American Badass” in a performance like no one has ever seen before. The dynamic musician pulled out all the stops during his Sturgis concert, inviting an enormous entourage of musicians to join him on stage. Audiences at home are sure to feel the energy from this electrifying performance as illuminating flashes of lightning fill the sky and an unrelenting rain beats down upon the enormous crowd.Don’t miss the chance to relive some of the most insane highlights of the 2013 Sturgis Rally during the first ever CMT Bike Week, Aug. 18-24.About The Sturgis Buffalo Chip
Family owned and operated, the Sturgis Buffalo Chip®, the Sturgis rally’s cornerstone event known as the Largest Music Festival in Motorcycling™ and The Best Party Anywhere™, recently celebrated its 32nd annual concert series. One of the few remaining independent music festivals in the world, this famed creek fed 580 acre camping resort three miles east of Sturgis, SD has provided 9 days of epic live music experiences and exciting activities for fans from around the world since 1981. Concerts are free with camping. Passes grant access to music industry’s hottest stars, the Bikini Beach swim paradise, 25 bars, mouth watering food and beverage vendors and thrilling exhibits. The Sturgis Buffalo Chip offers clean, well maintained facilities, private showers, cabins, RV’s, paved roads and more. Outrageous events such as unforgivably hot bikini contests and jaw dropping daredevil stunts are a few of the many daily spectacles unique to the Chip. The Buffalo Chip is a festival experience like no other. More details are available at BuffaloChip.com.