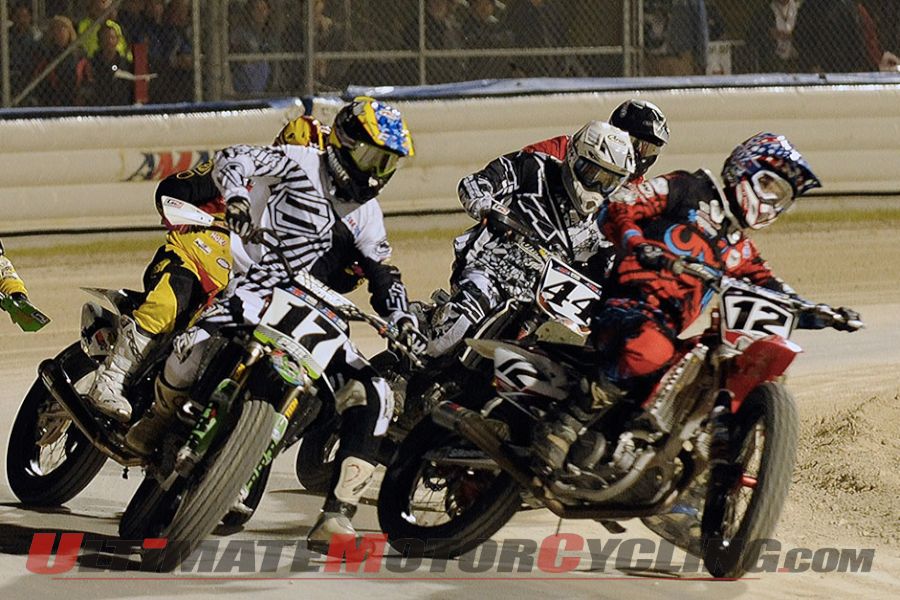 2013 AMA Pro Flat Track Round 1 RecapRound one of AMA Pro Flat Track presented by J&P Cycles heated up on a chilly night on Thursday, March 14, 2013 at DAYTONA Flat Track.Defending Grand National Champion Jared Mees (Montgomeryville Cycle / National Cycle / Rogers Racing) got out front early in the main event only to surrender his lead to Brad Baker (Specialty Fabrication Inc. / Schenk Racing) on lap two.Baker looked well on his way to his first GNC victory as he pulled out to nearly a one second lead. However, there was a melee of riders transpiring behind Baker that included a charging Mikey Rush (Machete Energy Drink / Cascio-Rush Racing). Rush, a winner at Daytona back in 2007, came from the back-end of the pack and systematically knifed his way up to a competitive position with the race hanging in the balance.Rush passed Mees on lap eight for second place and began cutting into Baker’s lead. The young Californian was able to make his move for the lead on lap 18 and made it work. “Brad made it extremely difficult for me tonight but I was lucky to make that pass late in the race and eventually stick it for the win,” said Rush. “The feeling I have right now is incredible and I love competing against these guys.”Baker tried in vain to counter attack. “About three quarters of the way through the race I felt someone coming up behind me. As rough as the track was I didn’t dare look back,” said Baker. “Mikey finally came by and it was there wasn’t much I could do at that point.”Rush passed Baker on lap 18 and never looked back, claiming his first ever professional victory.“I got hurt pretty bad at the Springfield Short Track last year,” said Rush. “Now I’m on top of the box. I’m stoked. I was just trying to pick up the throttle way earlier than them. That’s what it took to do it tonight. I just want to say that I love Daytona, this place is extremely special to me.”Final results 1-10: 1st – Mikey Rush, 2nd – Brad Baker, 3rd – Jared Mees, 4th – Henry Wiles, 5th – Brandon Robinson, 6th – Matt Weidman, 7th – Jake Johnson, 8th – Johnny Lewis, 9th – Stevie Bonsey, 10th – Jethro HalbertAMA Pro Grand National Championship Expert Singles – Round 2Day number two of AMA Pro Flat Track presented by J&P Cycles action was filled with intense racing action that included more surprises.The start of the 25 lap AMA Pro Grand National Championship Expert Singles race saw Kenny Coolbeth Jr. shoot his Chaplin Kawasaki / Cometic Gasket backed Kawasaki into the lead over the 18 rider field.Fellow Kawasaki pilot, Brandon Robinson, pushed his TJ Burnett Farms / USC Racing / Hart Racing Kawasaki to the front on lap two, wasting no time establishing himself as the man to beat. After 24 nearly perfect laps, Robinson earned his first Grand National victory.“This is a dream come true,” said Robinson, who overcame career threatening injuries in 2009 at the Indianapolis Mile. “Ever since I was a kid I’ve dreamed about winning a National. All the hard work I put in this winter paid off. The end of the race seemed to last forever. I saw the five-lap board and couldn’t believe there was that much still to go.”Brad Baker (Specialty Fabrication Inc / Schenk Racing) was looking to improve on Thursdays night’s second place finish and closed repeatedly on Robinson, but to no avail.“Every time Brandon made a little mistake I’d gain on him,” Baker said. “I thought I might have a chance to go for the lead at one point, but then with about five to go I made a mistake. If you make one slip here it takes five laps to make up for it. Even though I didn’t get a win, it feels good to leave with the series lead.”Coolbeth held on to third for a long time, but Bryan Smith had his Crosley Radio / Howerton Racing backed Honda on the move. Smith had a good start, dropped to eighth, and then started a slow climb to the front, grabbing third on lap 14.“I came up and made a lot of passes,” Smith said. “The way people were riding; you could make up or lose four or five positions in one corner. Once I got in third I just could not seem to close the gap, but we’ll take it.”When the double checkers came out, Robinson’s lead had grown to over a second and was his largest lead of the night. “My entire team just worked extremely hard to make this happen for me and I can’t be more thankful for their support,” said Robinson.“We got the setup as close to perfect as possible and everything went as smooth as we could have asked for all night. I got out front early in the main event, put in a hard 25 laps and it all paid off. My team and I have had an awesome week in general and it feels incredible to win here.”Though Baker finished in an impressive second place in Friday night’s main event, a post-race protest by an opposing competitor led to a technical inspection of Baker’s motorcycle. The inspection revealed that Baker’s Honda had suspension parts that were in violation of AMA Pro Flat Track’s guidelines. Though Baker retained his second place finish and money earned, he had to forfeit the 19 points granted to him for his effort.This mistake on Baker’s behalf leaves Robinson as the point leader after leaving the Sunshine State. Robinson holds a four point advantage over Rush with 2011 Grand National Champion Johnson just eleven off the lead.Final results 1-10: 1st – Brandon Robinson, 2nd – Brad Baker, 3rd – Bryan Smith, 4th – Jake Johnson, 5th -Mikey Rush, 6th – Kenny Coolbeth Jr., 7th – Matt Weidman, 8th – Jethro Halbert, 9th – Robert Pearson, 10th – Jeffrey Carver Jr.