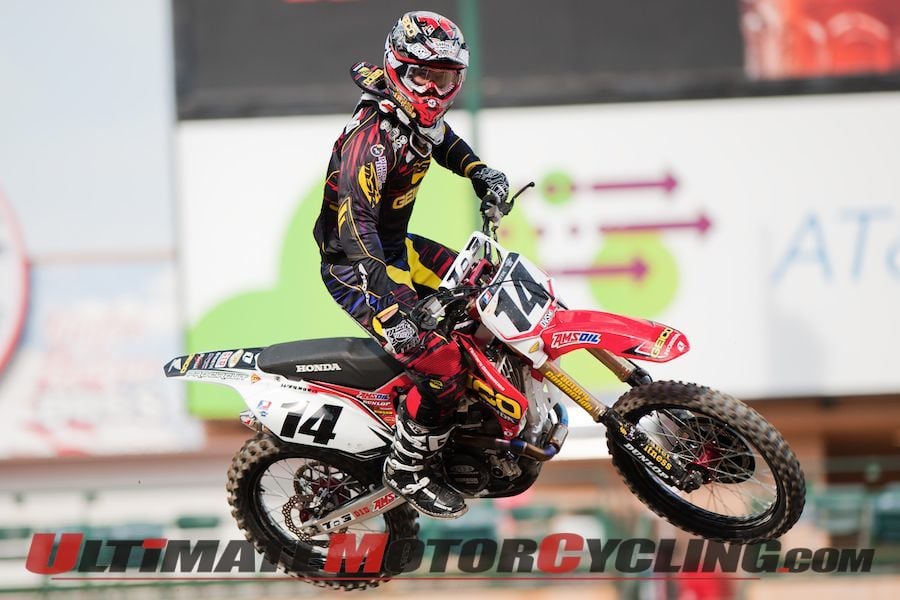 2013 Honda’s Daytona Supercross PartyHonda, the presenting sponsor of 2013 Daytona Supercross, will be celebrating a milestone at this year’s SX round held in the US’s most famed speedway, Daytona.This year marks the 22nd anniversary of “The Daytona Supercross by Honda,” and also 40 years of Honda motocross racing in the USA.Honda says: “From Honda’s first epic National Motocross Championship won by Gary Jones in 1973 up through today’s Team Honda Muscle Milk Supercross racers Trey Canard and Justin Barcia, Honda has a long and successful history of victory in American Motocross and Supercross racing.”And of course, in true Daytona style, Honda will be celebrating with party at Daytona this year. All fans are invited to the event that will get underway in Daytona Beach from 6 to 8 p.m. Friday, March 8. The party will occur inside the big red Honda tent at the main Honda display in front of Daytona International Speedway.Shane McCassy (CytoSport’s Director of Sports Marketing) says: “Daytona Supercross is a huge stage for Team Honda Muscle Milk, and we look forward to adding to the Honda legacy here and throughout the rest of the season. In addition to meeting the riders and Honda racing legends, make sure to stop by for your free sample of Muscle Milk.”There will also be many Honda motocross stars on hand to greet fans and sign autographs, including Trey Canard, Justin Barcia, Chad Reed, Eli Tomac, Wil Hahn, and Zach Bell, and racing legends Gary Jones, Jeff Stanton, Jeremy McGrath and Kevin Windham.Honda says “all these festivities on top of the great racing action will make this year’s Daytona Supercross by Honda a bigger celebration than ever before.”Honda Racing History at Daytona (courtesy of Honda)Honda is the only brand to sweep the podium at the Daytona Supercross an astounding four times! With that kind of success, merely recounting the numerous Honda winners at the Daytona Supercross and a few highlights makes for a most impressive story.Through the years, Honda winners in the premier Supercross/250 Two-Stroke class at Daytona include a wealth of riders who are legends in the sport: Kevin Windham, Ricky Carmichael, Jeremy McGrath, Jeff Stanton, Rick Johnson, Rick Ryan, Bob Hannah, David Bailey, Darrell Shultz and Marty Tripes. Honda winners at Daytona in the SX Lites/125 Two-Stroke class include: Justin Barcia, Trey Canard, Davi Millsaps, Doug Henry, Brian Swink and Keith Turpin. Among the many highlights gathered along the way, two of the most outstanding performances in Daytona Supercross history were achieved by Honda riders: the 11-year run of consecutive Supercross-class victories by Honda riders from 1982 through 1992, and Jeff Stanton’s amazing string of four wins in a row from 1989 through 1992.Regarding Ricky Carmichael’s back-to-back wins for Honda in 2002 and 2003, the latter race was especially wet and grueling, yet RC lapped all but two other riders by the time the checkered flag fell—an incredible performance by man and machine.And on a track renowned for its super-tough conditions, Kevin Windham’s Daytona Supercross by Honda victory in 2008 will forever stand out as one for the ages; due to a steady, driving rain, the track was quickly reduced to a truly hideous quagmire, yet K-Dub and his CRF450R kept slugging away to take the hard-earned win en route to becoming the stuff of legends.Honda Daytona Winners