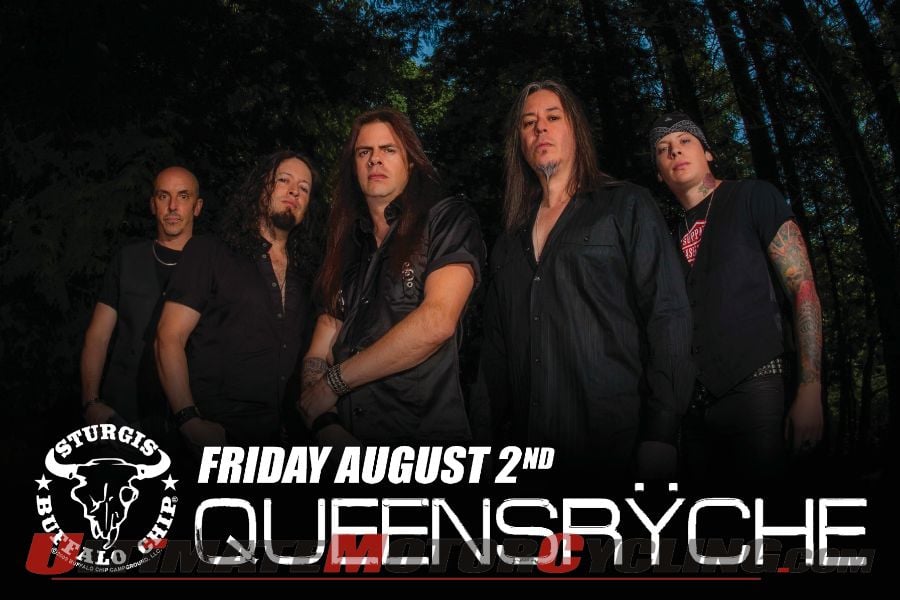 2013 Sturgis Motorcycle RallyBy Daymon WoodruffHard rock band Queensrÿche will join the lineup of artists to perform at the Sturgis Buffalo Chip annual music festival Aug. 2-11, 2013 during the Sturgis motorcycle rally in South Dakota.Queensryche, scheduled to kick off the first night of festivities at the Buffalo Chip on Friday, Aug 2nd, will pave the way for high energy bands such as ZZ Top, Toby Keith, Brantley Gilbert, and many more to perform at the Largest Music Festival in Motorcycling.More concerts, which range in genres from hard rock to classic rock to country rock, will be announced soon. Visit BuffaloChip.Com for more information and concert passes, which are free with camping and less expensive when reserved in advance.Queensrÿche, chosen by the Sturgis Buffalo Chip due to their years of popularity and success, first joined the music scene with the release of their self-titled four-song EP in 1982. Since then, Queensrÿche has produced 12 albums, selling over 30 million albums worldwide. Queensrÿche’s international recognition led them to perform to sold out shows worldwide.The band released their first full-length album, “The Warning” in 1984, and their third ground breaking album “Rage for Order” in 1986. The band turned out their monumental album “Operation: Mindcrime” in 1988, which then went on to be named one of the Top 10 best selling conceptual albums of all time.By 1991, the band had continued to churn out records, releasing “Empire,” which landed them multiple Grammy Award nominations and winning the MTV “viewers choice” award for the #1 chart topping hit “Silent Lucidity.” Queensrÿche has continued to release albums and tour the world to sold-out shows for the following 10 years.Rod Woodruff (President, Sturgis Buffalo Chip) says: “Queensrÿche is high energy, just the way Buffalo Chip concert goers like it. We couldn’t be happier knowing that Queensrÿche will create a memorable first night of good times for everyone at the festival.”Get more information about Queensrÿche and the Legendary Buffalo Chip concert line up at BuffaloChip.Com/BANDS.aspx. The Sturgis Buffalo Chip has been offering its guests the Authentic Sturgis Experience™ for more than 30 years with its premium camping resort and world-class entertainment. The growing list of events can be viewed and reservations can be made now for the 73rd Sturgis motorcycle rally and 32nd annual Buffalo Chip music festival Aug. 2-11, 2013 at BuffaloChip.Com/EVENTS.aspx or by calling (605) 347 9000.