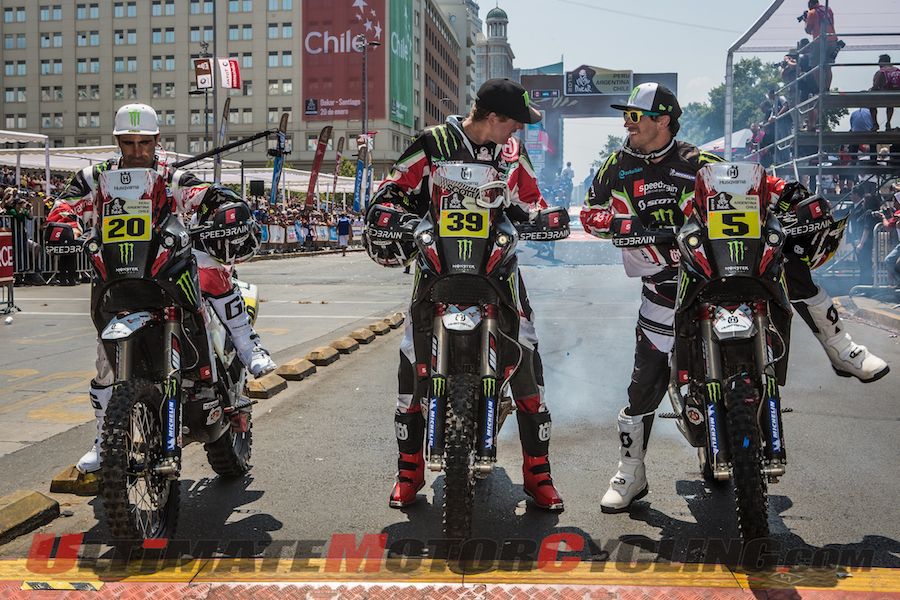 2013 Dakar Rally ReportOn Sunday, Santiago saw the final parade and the prize-giving ceremony staged on a podium set up downtown as the thirty-fifth edition of the Dakar Rally drew to a close.The parade included all the teams who managed to finish the race that began on Jan. 5  in Lima, Peru and finally rolled into the Chilean capital some 8000 km (5000 miles) later. Joining the celebrations was the Husqvarna Rallye Team by Speedbrain, one of the main protagonists this year.This has been the second official participation in the Dakar for the Husqvarna Rallye Team by Speedbrain. The race has been an excellent display of all the work carried out by the squad’s technicians at the Dakar, as well as in the factory in Varese, Italy. A superb effort was made also by the private riders aboard their Husqvarna TE449s who were able to take on and complete this great challenge.Klaus Allisat (President Husqvarna Motorcycles) says: “A big ‘thank you’ to the whole Husqvarna Rallye Team by Speedbrain; to the four factory riders, Joan, Alessandro, Paulo and Matt, to Berti Hauser, and finally to everybody who has worked so hard in Varese and behind the scenes in Stephanskirchen.“Husqvarna has won many stages and we should be very proud of the result especially in consideration that is only the second attempt at the Dakar. It has been a great 2012 season of rallies for Husqvarna.“We won the Pharaons with Barreda on the TE449RR by Speedbrain and also had a great result in the Morocco Rally where we were second. We had a clear target for the Dakar: to win as much as possible and we achieved it. We won four stages out of fourteen, and gained twelve podium places, and this is a dream come true for everyone at Husqvarna.”Berthold Hauser (Dakar Project leader in BMW) says: “First of all I want to say how pleased I am that everybody in the team made it in one piece to Santiago, which is not easy in a rally that is so hard, not only on the hardware, but also on the participants. Even though we didn’t reach our original aim, we’ve learned a great deal from this race.“It’s a particular rally where we obtain information that no other race can supply. We’ve noted down and memorized everything to be able to improve for our next participation. I can already feel the willingness and motivation to think ahead to the next Dakar and the forthcoming events. The fundamentals are now all in place; the team, the bike and the riders. That’s why I’ve got to tip my hat to Wolfgang Fischer for the work he’s done in putting such a great  team together.”2013 Dakar Rally Final Standings:
1. Despres (FRA, KTM)
2. Faria (P, KTM) at 10’43”
3. Lopez (Cile, KTM)  at 18’48”
4.Jakes (Slo,KTM) at 23’54”
5.Pedrero (Spa, KTM) at 55’29”
6 Pain (F, Yamaha) a 1h06’30”
7.Rodrigues (PRT, Honda) at 1h11’22”
8. Pizzolito (ARG, Honda) at 1h 26’07”
9.Verhoeven (NL, Yamaha) at 1h 26’35”
10 .Paulo Goncalves (PRT, Husqvarna Rallye Team by Speedbrain) 1h28’20”
17.Joan Barreda (ESP, Husqvarna Rallye Team by Speedbrain) 3h04”42
56. Alex Busquets ( ESP, Husqvarna) 10h 27’24”
56. Bianchi Prata (PRT, Husqvarna) 10h 53’32”
59. Simon Pavey (Aus, Husqvarna) 10h57’29”
111. Fish ( Aus. Husqvarna Rallye Team by Speedbrain) 25h25’20”