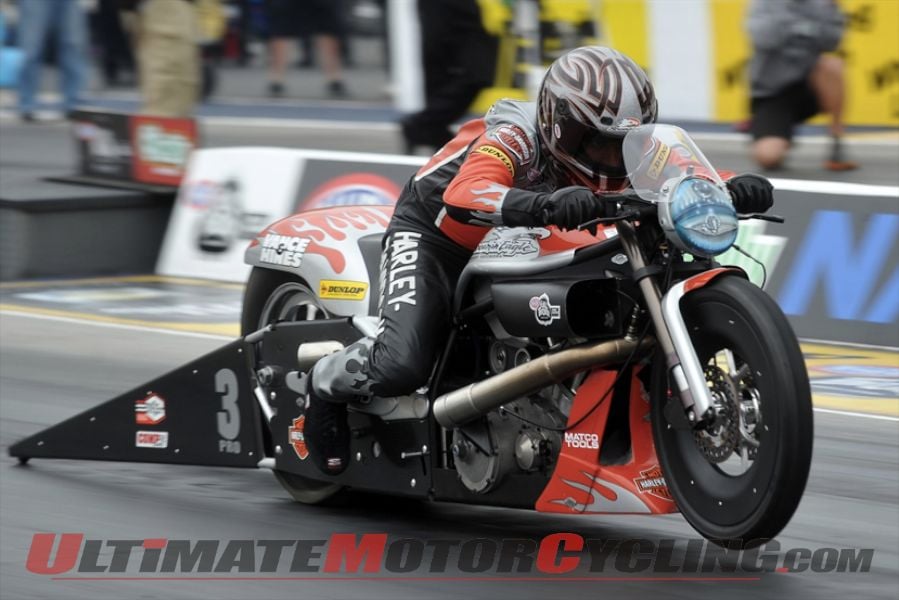 2011 NHRA Pro MotorcycleHarley-Davidson Screamin’ Eagle/Vance & Hines rider Ed Krawiec added to his points lead in the NHRA Full Throttle Countdown to the Championship at the AAA Texas NHRA Fall Nationals at the Texas Motorplex.Krawiec won a single round in Sunday eliminations, but his closest rival for the championship, Geico Suzuki rider Karen Stoffer, was also eliminated in the second round and failed to gain points on the Harley-Davidson V-Rod rider. With four rounds left on the Countdown schedule, Krawiec’s lead stands at 67 points.Ed Krawiec (Harley-Davidson V-Rod NHRA) says: “We had a strong V-Rod bike all weekend. I had a chance to win but didn’t get the job done.”Krawiec qualified in sixth position with a 6.867-second run on Friday. His teammate, Andrew Hines, qualified the other Harley-Davidson® Screamin’ Eagle®/Vance & Hines V-Rod in second position at 6.850 seconds. Lucas Oil Buell rider Hector Arana Jr. was the top qualifier at 6.828 seconds.On Sunday, Hines won his first-round match against Suzuki rider Steve Johnson, but lost in round two when SAF & Motorcycles Specialties rider Jerry Savoie had an outstanding 0.002-second reaction time at the start of a 6.968-second run that Hines could not match with a 0.045/6.961 pass.Andrew Hines (Harley-Davidson V-Rod NHRA) says: “I was in my range at the start all weekend. I’ve won a lot of races at .045, so I can’t hang my head about this loss. We missed a weather change here between the first and second rounds, and both bikes lost four miles per hour in top speed. The Screamin’ Eagle V-Rods were coming off the line consistently all weekend. We’ve got two strong bikes for the rest of the Countdown.”Krawiec opened Sunday eliminations with a win over Vroom/LAT Oil Buell rider Mike Berry, but lost in round two after a late reaction time put him behind The Edge Suzuki rider Michael Phillips, who ran 0.019/7.016 to beat Krawiec’s 0.080/6.984 pass.

Ed Krawiec says: “I just missed on the tree in round two. I’ve got a lot of confidence in the Screamin’ Eagle V-Rod and we are heading to Reading for the next race, a track where we usually are strong.”Phillips defeated Arana Jr. in the final at Texas to take his first win of the season.After two of six Countdown events Krawiec leads the Pro Stock Motorcycle class with 2295 points. Stoffer is second with 2228 points. Arana moves up to third place with 2205 points, followed by Matt Smith with 2198 points, and Hines in fifth with 2176 points. Nitrofish Suzuki rider LE Tonglet is sixth with 2164 points.The third round of the Countdown to the Championship, the 27th annual Auto-Plus NHRA Nationals, takes place Sept. 29-Oct. 2 at Maple Grove Raceway in Mohnton, Pa.