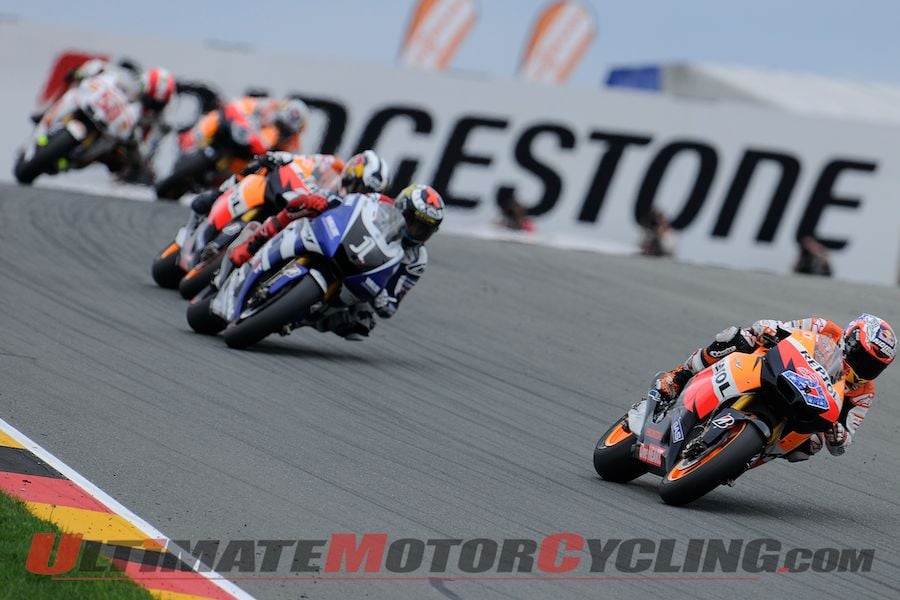 2011 MotoGPThere’s no rest for the MotoGP paddock as it travels from Indianapolis last weekend straight to Rimini and the Adriatic Coast for the San Marino Grand Prix on 4 September.The Misano World Circuit is twisty and quite stop-start in nature, although there is a very fast section from turns 10 to 13. Consequently MotoGp riders spend a lot of time on the brakes meaning that braking stability from the front Bridgestone tires is crucial.Confidence in rear grip is especially important through turns six, 10 and 16, which all lead onto sections of straight.The MotoGP circuit isn’t particularly demanding of Bridgestone’s tires, although it is harder on the right shoulder than the left because of its clockwise direction and in particular the complex of turns 10 to 13, which is a high speed right-handed kink called Curvone that leads into a series of increasingly tightening right-handers. Here, high-speed stability and edge grip is at a premium and riders must have the confidence to fully commit.Last year Bridgestone selected symmetric tires for Misano MotoGP, but this year the allocation has been revised to use asymmetric rear slicks which offer a softer compound left shoulder for improved warm-up performance and increased rider feeling.In keeping with the new tire regulations introduced during the Czech Republic Grand Prix, the medium and hard compound front slicks have again been selected for Misano MotoGP with the addition of the third soft compound option for cooler conditions.After a time away, MotoGP returned to Misano in 2007, but the circuit layout was changed slightly at turn three in 2008, increasing the track’s length to 4.226km. Bridgestone has a great track record in Misano since the circuit’s return to the calendar in 2007.Ducati Team’s Casey Stoner took pole and won in 2007 on Bridgestone MotoGP tires in the era of tire competition, in 2008 (last year of tire competition) and again in 2009 Valentino Rossi set a new lap record on his way to victory, and last year Dani Pedrosa set another new lap record.Hiroshi Yamada (Manager, Bridgestone Motorsport Department) says: “Misano MotoGP will bring mixed memories and emotions for many, including myself, but it is a circuit that Bridgestone have always been strong at with consecutive new lap records in the last three years.“In the absence of tire competition the laptime is our benchmark and, combined with developments to the machines each year, I believe this shows we are not resting on our laurels with tire development. We always see a very passionate crowd at Misano MotoGP, and hopefully we will give them a good show as the title fight hots-up with only six races of this season remaining now.”Hirohide Hamashima (Assistant to Director, Motorsport Tire Development Division) says: “The track surface at Misano is smooth and offers relatively low grip, but it has a twisty layout so the tires spend a lot of time leaned over and don’t have a lot of respite each lap in which to cool down. Ambient conditions are also usually hot so in our compound selection we must strike a tricky balance between grip and durability.This year we have selected asymmetric rear slick tires for Misano and I believe, based on tyre performance at other races and rider feedback, this will be a step forward in warm-up performance on the left side and rider feeling and confidence, and in achieving the right balance.“The fast right-handed Curvone corner is where the tires reach their highest temperature, particularly the rears, and because of the high speed good stability is critical. A strong center section of the front tire is also required for good stability under frequent and sometimes heavy braking. It is also important for every element of the bike, rider and tire package to work well here because with the nature of the track meaning tires have little time upright in which to cool, it is easier to overheat them.”Bridgestone MotoGP slick compounds available: Front: Soft, Medium, Hard. Rear (asymmetric): Medium, Hard