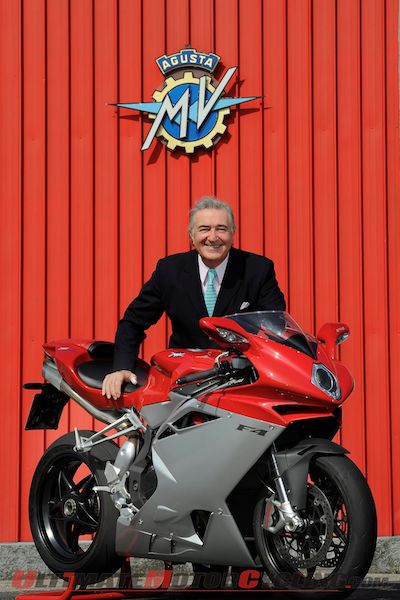 Motorcycle NewsThe President of MV Agusta Motor S.p.A., Claudio Castiglioni, 64, passed away Wednesday morning in Varese, Italy after a courageous battle against an illness.The man who personally elevated the Italian motorcycle industry to its current role as world leader and the businessman who excelled with the MV Agusta, Cagiva, Ducati and Husqvarna brands has left us.After his experience in the family business’s specializing in metalworking and manufacturing, in 1978 Castiglioni founded the company Cagiva which continually developed new and innovative motorcycles that have influenced the direction of the Italian and world motorcycle markets through the 1980s and 1990s.Intuitive, tenacious, and a true visionary: these qualities drove Claudio Castiglioni to purchase the historic brands like Ducati, Husqvarna and MV Agusta. Coupled with his vision, diligence, hard work and financial investment these brands have once again become the protagonist of the two wheeled market.Claudio Castiglioni has given us some of the most important motorcycles ever built, personifying performance, elegance and style: Cagiva Elefant and Mito, Ducati 916 and Monster as well as the MV Agusta F4 and Brutale. Finally, the President crafted the latest jewels in every detail, a testament to his insatiable passion for motorcycles: the MV Agusta F3 and Brutale 675.Racing has always been one of his greatest passions, and his forays into competition have resulted in success at every level of world championship racing. With Cagiva came the titles of World Motocross Champion as well as the triumphs in the most enduring desert race, the Paris-Dakar. Also with Cagiva were the numerous successes in the 500 GP class. Ducati, under his guidance, dominated entire seasons of the World Superbike Championship thanks to models such as the 851 and 916. Finally, Husqvarna acquired a number of World Championships in Enduro, Motocross and Supermotard.At the very center of his personal and professional history there is MV Agusta, to which he dedicated over 15 years creating motorcycles which have come to be considered the world wide icon for style and exclusivity as well as representing excellence Made in Italy.With the MV Agusta motorcycles, nothing was ever left to chance, the smallest details were reviewed and revised hundreds of times in order to create motorcycles that are simply unique, personifying perfection. Behind every detail, there are the ideas, heart and soul of Claudio Castiglioni.For the past year, the President has left the guidance of MV Agusta to his son Giovanni, who has been by his side during many of the battles that have formed the story of the manufacture in Varese. These challenges, day after day, constructed and invisible fabric that was so well woven by this truly unique person and businessman. Giovanni, with the same passion and tenacity as his father, from this day forth will continue to create what Claudio Castiglioni described as “the most beautiful motorcycles in the world.”The funeral will take place Friday, Aug. 19, at 2 p.m. (local time) in the Church of the Brunella in via Crispi, Varese (Italy).