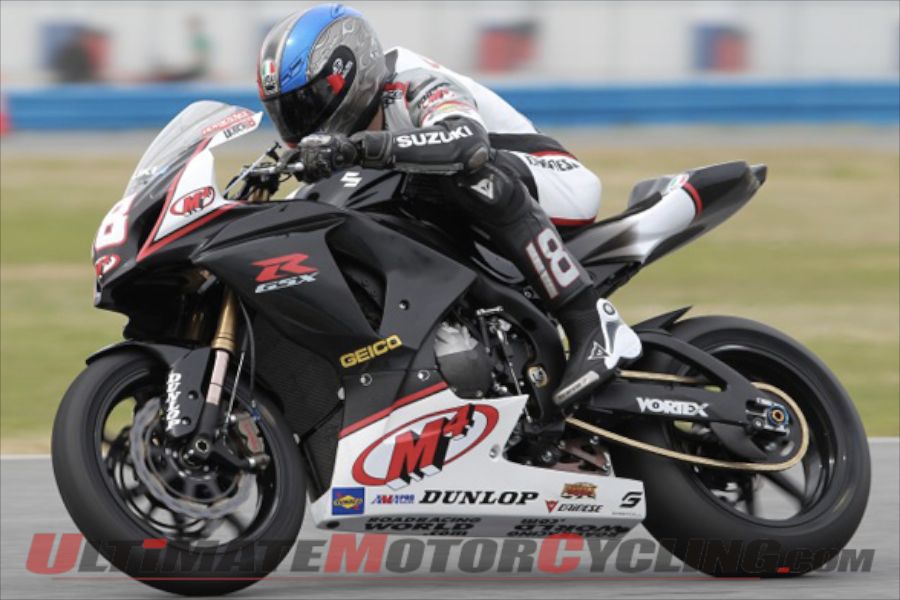 2011 AMA Pro RacingM4 Suzuki’s weekend got off to a somewhat painful start on Friday at Mid-Ohio Sports Car Course in Lexington, Ohio.Martin Cardenas displayed promising speed in the day’s practice and qualifying sessions, ultimately putting GSX-R1000 Superbike on the provisional second row with the day’s seventh fastest time at 1:26.380, just 0.741 seconds off of first.However, the Colombian was left smarting at the end of the day following a pair of crashes, including a high-speed spill that ended his day early.The Barber Motorsports Park Superbike race winner explained, "In the first practice it was just a low side. No problem. But the one in qualifying was pretty fast and I kind of hurt my knee and my ankle. I’m going to ice it down and see how it feels tomorrow."Other than that, everything was going well for the team and me. The bike was doing what we wanted, especially for qualifying. We put some new tires on just to stick in another good lap and see where we might end up and then the crash happened."Teammate Chris Ulrich was feeling it at the end of the day as well as he made his return to action after being sidelined for two months. Still extremely sore from his Infineon Raceway crash that resulted in two fractured lumbar vertebrae, Ultich also suffered from not being able to maintain his usual training regimen while healing. Chris had to grit it out just to circulate on Friday and wasn’t able to set his typical pace. As a result, he ended up 19th on the day at 1:29.646.Chris Ulrich (M$ Suzuki GSX-R1000) says: "We knew coming into here that it was going to be tough," Ulrich said. "It’s been less than eight weeks and I’ve been very limited in what I’ve been able to do during that time — a lot of recovery and minimal training. Physically, my back is still sore and the internal bruising took more out of me than I realized."On the motorcycle, I still know how to shift and brake and the bike is working well, but right now I’ve only got about three good laps in me at a time. We’re not as competitive as we would like but we’re doing the best we can. We’re going to take it session-by-session, day-by-day, and see how it goes. Riding a Superbike isn’t easy even when everything is right physically."Dane Westby led the charge for M4 Suzuki in Daytona SportBike provisional qualifying on Friday, putting his GSX-R600 on the provisional second row. Westby, who is riding a wave of momentum with two podiums in his last three outings, was seventh best on the day, qualifying at 1:31.093.Santiago Villa landed on the outside of the provisional fourth row. The Colombian was 16th on Friday, notching up a quick lap of 1:33.069.On Saturday morning M4 Suzuki will finalize their grid positions in the final qualifying before turning their attention to the afternoon’s SportBike and Superbike races.