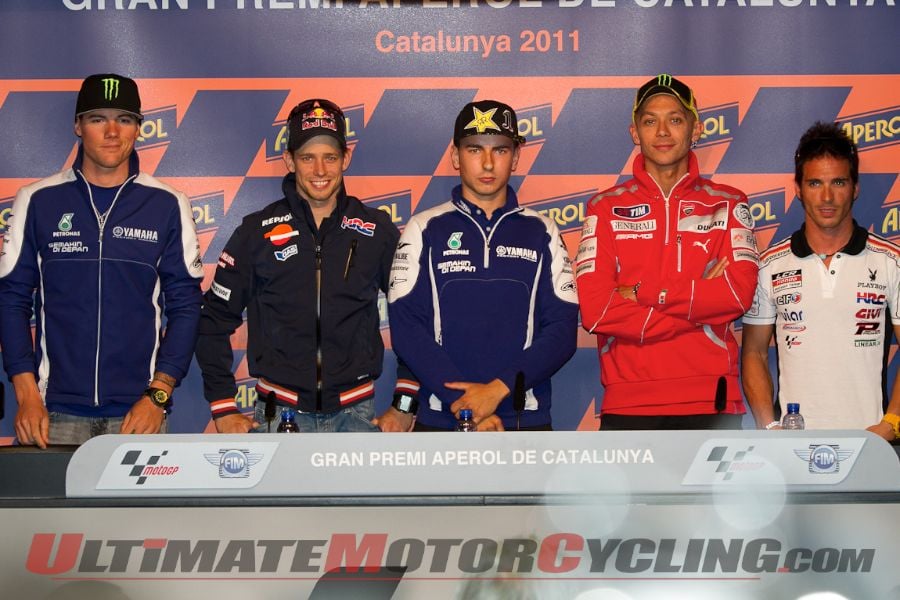 2011 MotoGPIn the following MotoGP report, Valentino Rossi, Ben Spies, Casey Stoner, Jorge Lorenzo and Toni Elías field questions from the assembled press ahead of the Gran Premi Aperol de Catalunya on Thursday.The official Gran Premi Aperol de Catalunya press conference took place at the Montmeló circuit on Thursday, as the pre-Round 5 hype grew further ahead of an intense period of activity in the 2011 MotoGP World Championship.The race marks the start of six rounds in the space of eight weekends in the premier class schedule, and current Championship leader and defending World Champion Jorge Lorenzo is hoping to capitalise on "home advantage" in a MotoGP race which he won from pole position last year.Jorge Lorenzo (Yamaha Racing MotoGP) says: "This is the closest GP to home for me and I live in Barcelona, so I feel at home here which is very important. Le Mans was a really tough weekend. We didn’t have a great set-up but we pushed to the maximum and gave 100%. We’re working to improve the bike, horsepower and set-up. I think we can get it, it just needs time and patience and we’ll keep working hard."The Spaniard hopes the circuit will be a more hospitable one to his Factory Yamaha Racing M1. "There are not so many slow corners, I prefer faster ones where I can use my corner speed. This should be a better track for me."Additionally Lorenzo urged the crowd, who will not see local rider Dani Pedrosa in action due to injury, to not give Marco Simoncelli a hard time after the events at Le Mans. Jorge Lorenzo says: "We spoke a lot on this subject. The crowd must be quiet on Sunday, in my opinion. I think Simoncelli understands what he has to do in the future. We all hope Dani is back as soon as possible because he is one of the key riders."Casey Stoner will fly the Repsol Honda flag alongside Andrea Dovizioso in the absence of Pedrosa, but the Australian is battling the remnants of a flu-like illness he picked up in the interval between rounds.Casey Stoner (Repsol Honda MotoGP) says: "It’s always nice to have a small break. I’m not feeling the best at the moment but you’re always more enthusiastic after a break. We had a great weekend at Le Mans and I really enjoy this circuit, and I think the Honda will go well here."Stoner, race winner in France, knows the importance of the upcoming hectic schedule. Casey Stoner says: "Things can happen in this period. All riders are professionals and know how to deal with this. Everybody has a high level of fitness. I think now we have most of the tracks I struggle with out of the way, we were very competitive at Jerez and Le Mans."Adding a word on Pedrosa, Stoner said: "He’s an extremely fast rider and I expected him to be riding here, but he’ll miss this weekend and we’ll have to wait and see for Silverstone. Missing one race is hard, but two is a lot."Ducati rider Valentino Rossi missed last year’s race due to injury, prior to which he had finished on the podium for 13 successive seasons. Valentino Rossi (Ducati Team MotoGP) says: "This is one of my favorite circuits. Last year I watched from home so it’s great to be back. This year every track is a new story, and this one has a great layout and plenty of overtaking opportunities. "Now we enter a ‘hot moment’ in the Championship, but it’s also very long. Now we have to be careful, there are six races in eight weeks and they’re all great tracks. It’s an important part of the Championship."Ben Spies finished sixth on his debut at the track last season but has experienced a trying start to the 2011 campaign. The American is hopeful he can give his season a kickstart with a strong result here this weekend.Ben Spies (Yamaha Racing MotoGP) says: "We want to get the confidence going again and need to start like it’s a new Championship. I believe in the team and once we get the confidence up it’ll be okay. We haven’t lost the confidence, we just need to get the ball rolling. I like the track and just need to stay steady and keep going forward."Catalan rider Toni Elías will be determined to give his home crowd reason to cheer. The LCR Honda rider’s return to the premier class has not been an easy one, and the 2010 Moto2 World Champion will receive a new RC212V chassis this weekend which he hopes will make a difference.Toni Elias (LCR HOnda MotoGP) says: "After winning the Moto2 Championship last year I expected the return to MotoGP to be different this year. We’ll continue working, pushing, and the motivation is still good. We’ll receive the different frame here and I hope it gives me something better and we can take a step."