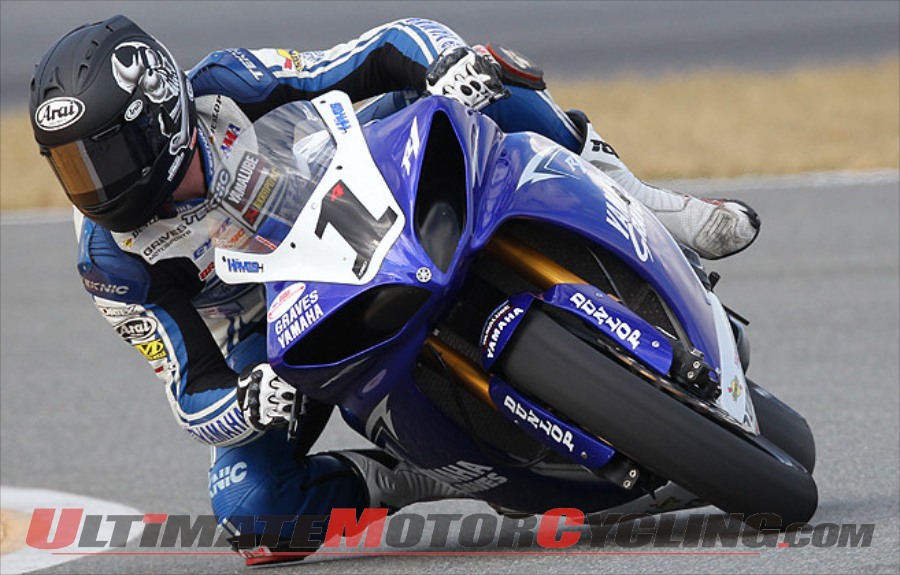 2011 AMA SuperbikeAfter the winter break and rain delays, AMA Pro Road SuperBike Racing teams finally got onto the newly-paved Daytona International Speedway for the Dunlop Tire Test, the first official open test session in advance of the upcoming 2011 motorcycle racing season.Topping the timesheets in the AMA Pro National Guard SuperBike class was reigning champion Josh Hayes on his 2011 Yamaha R1, posting a time of 1:38.795 / 127.901 mph. Right behind Hayes was Tommy Hayden on his Suzuki GSX-R 1000 with a time of 1:39.074 / 127.542 mph. Hayden’s Suzuki teammate Blake Young was third, and debuting the all-new 2011 Kawasaki ZX-10 R liter-bike was Eric Bostrom, who finished fourth. Another SuperBike rider showing well on a new combination was Larry Pegram, who posted the fifth-fastest time with his new 2011 BMW S 1000 RR. Debuting on entirely new team-and-motorcycle combinations were Ben Bostrom and Roger Hayden, both showing well for the Jordan Motorsports’ 2011 effort owned by the Chicago Bulls basketball legend Michael Jordan. Last year’s AMA Pro Daytona SportBike Champion Martin Cardenas (Team M4 Suzuki GSX-R 1000) made his debut in the AMA American SuperBike class and ended up eighth. Cardenas was just ahead of his Team M4 Suzuki teammate Chris Ulrich, who had to depart the track early to return home for the impending birth of his second child. Rounding out the top ten was the Buell 1190 RR of Geoff May.Josh Hayes (2011 Yamaha R1) says: "The track is just so unbelievably smooth; when you compare some of the data from previous years, it is so much smoother," comments the SuperBike champ on his day. "It is different, but it doesn’t take long to get back into the groove. I’m looking forward to the race."