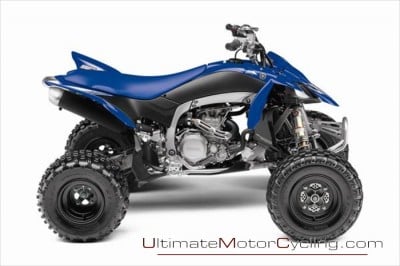 Yamaha Motorcycles jsut announced the full 2010 model year ATV product line including a new sport ATV designed specifically with the trail rider in mind, the YFZ450X. In total Yamaha will produce 17 ATV models for 2010 including class-leading, best-selling models from its Grizzly utility line and Raptor and YFZ sport lines.2010 YAMAHA SPORT ATV LINEUPThe YFZ450X is new to Yamaha’s line of top performing sport ATVs and replaces the original YFZ450 as the best new ATV for tight, technical woods and trail riding. This new trail machine is 46.1 inches wide (versus the MX track width YFZ450R introduced last fall) with optimized suspension, fuel injection, and Yamaha’s exclusive cast aluminum-steel hybrid frame. The light and nimble 450X is designed to carve through tight trails, over tree roots, rocks and almost anything else riders might encounter on a tough GNCC course or weekend trail ride. Both the new YFZ450X and YFZ450R feature the powerful 5-valve DOHC liquid cooled single cylinder 449cc engine and highest sport ATV performance technologies available.The Raptor legacy continues in 2010 with four models providing a range of size and performance: the Raptor 700R (best selling big bore sport ATV*), the Raptor 350, the Raptor 250 (all-around best selling sport ATV*), and Raptor 90 (best selling youth ATV*).Bridging the gap between pure sport ATV action and utility ATV capability is the Wolverine 450 4×4. The Wolverine is one of the most popular sport utility ATVs offering riders a nimble off-road machine with a sporty feel and push-button 4×4 capabilities.2010 YAMAHA UTILITY ATV LINEUPYamaha’s Grizzly 700 FI EPS, which introduced the first ever Electric Power Steering (EPS) on an ATV, continues to be the best selling big bore utility ATV**. This leading utility machine has won numerous awards and shoot-out comparisons with leading features like Yamaha Fuel Injection, Ultramatic(R) automatic transmission and On Command(R) 2WD/4WD/4WD with differential lock – all set atop a comfortable ride with fully independent suspension.The Grizzly 700 FI was the platform for the Grizzly 550 FI EPS introduced last year, which quickly became the best-selling 550-class utility ATV***. Other popular models in the Grizzly line include the Grizzly 700 FI (non-EPS), Grizzly 550 FI (non-EPS), Grizzly 450 4×4 IRS, Grizzly 350 4×4 IRS, Grizzly 350 4×4, Grizzly 350 2WD and Grizzly 125.Yamaha’s Big Bear 400 4×4 IRS sets itself apart with ITP Mud Lite tires and a semi-automatic five-speed transmission allowing the rider to choose the right gear for the conditions.More information on all of Yamaha’s 2010 model year ATVs can be found at www.yamaha-motor.com.