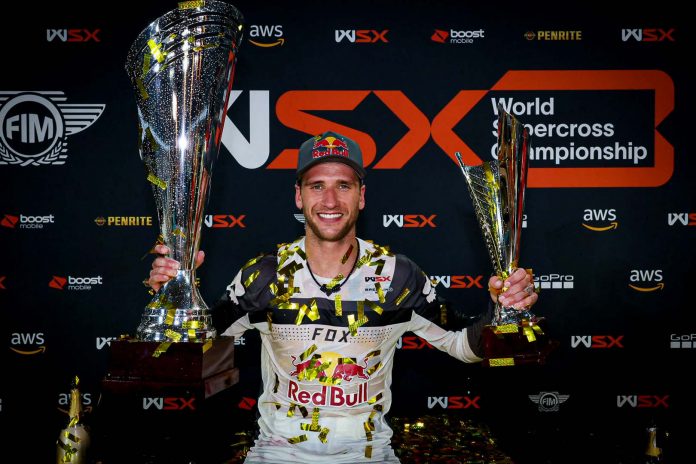 The inaugural 2022 Supercross World Championship Series is in the books. The first run of the WSX series was a short one—just an opening round in Wales and a final round in Australia.Eli Tomac dominated the opening round, with a pair of moto wins, plus wins and a victory in the Super Final. Tomac’s 75-point haul put him 15 points ahead of Ken Roczen. However, Tomac only rode the opening round, opening the door for Roczen to win the WSX World Championship.Roczen repeated a P2 finish at Australia, totaling 55-points, 17 shy of Joey Savatgy, and that was good enough for Roczen to take the World Championship title. Savatgy’s P7 showing in Wales was good enough, combined with his Australia result to take P2 in the overall standings, beating Vince Friese on a tiebreaker, as both were at 112 points, andfour points back of Roczen.Justin Brayton finished in P4 in the 2022 Supercross World Championship Series with 108 points, 22 points ahead of Josh Hill, who finished the season in P5.Roczen’s WSX title is his first World Championship since winning the MX2 crown in 2011.