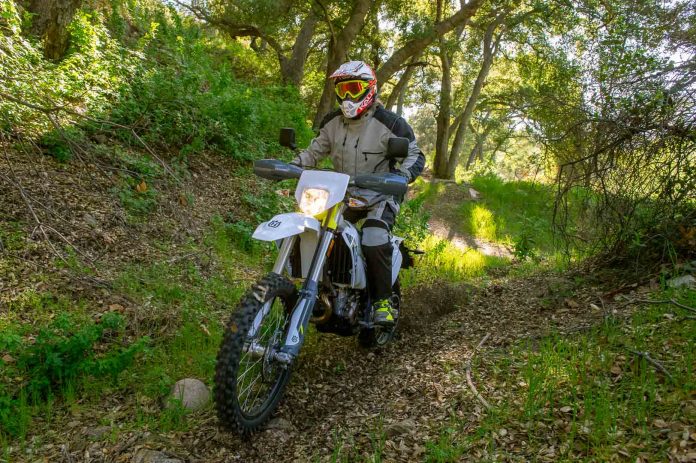 We are wary when we see “FIM-approved” on an off-road tire. Over the years, we have generally found them wanting for riders, even if environmentalists think they’re hunky-dory. However, the Dunlop Geomax Enduro EN91 has changed our minds. Maybe the Team USA knew something when it selected the EN91 for the 2019 International Six Days Enduro and went on to win. 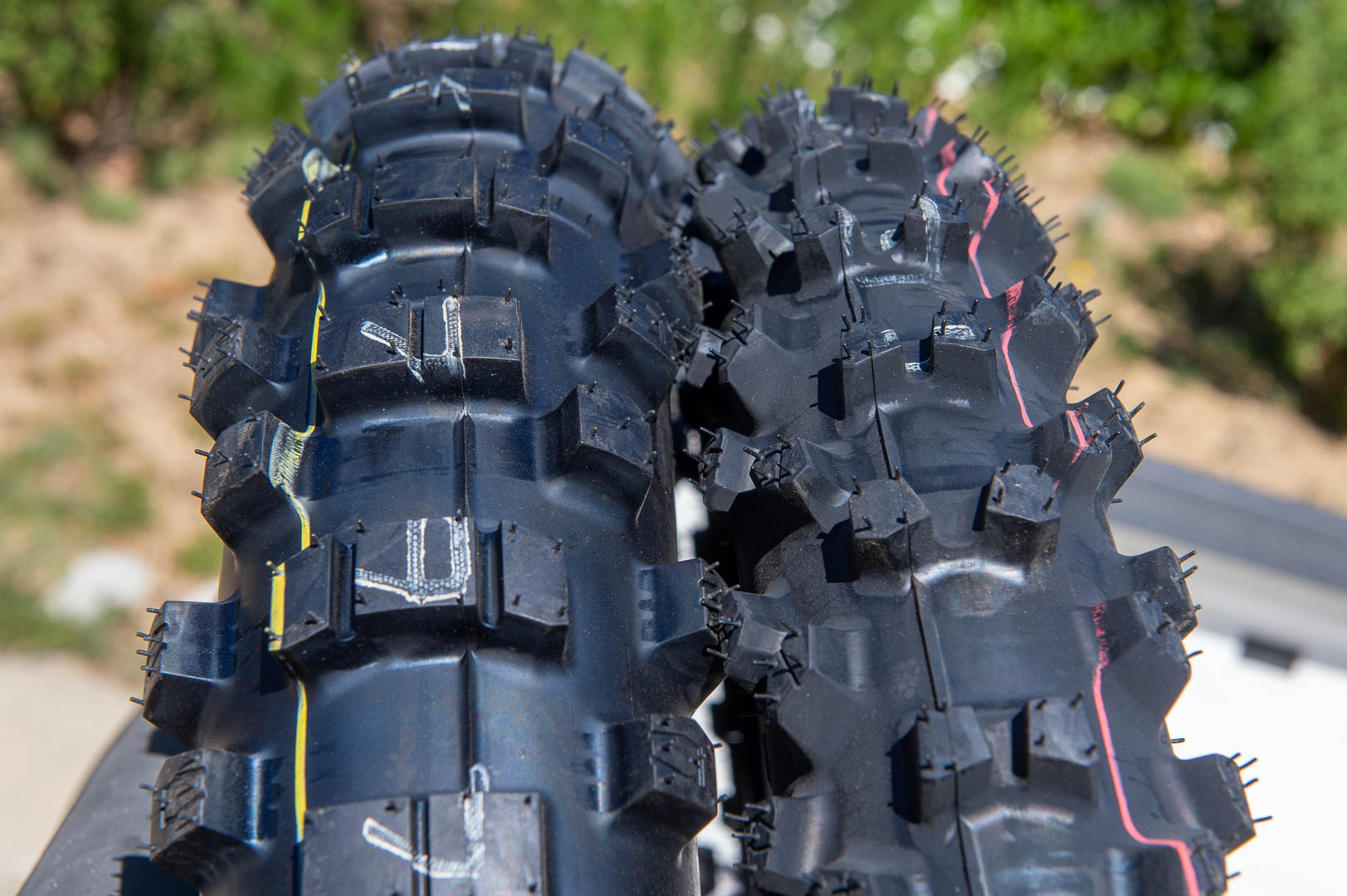 Keep in mind that the Dunlop EN91 isn’t necessarily sold as a purpose-built off-road tire. It’s DOT-legal—a boon to those who don’t like the idea of installing a tire that might get them a ticket when running on the street. When we replaced the 2022 Husqvarna FE 350s’s stock adventure-style tires, which are only there to help pass DOT sound regulations, we wanted to stay on the right side of the law and mounted a pair of EN91s onto the Husky dual-sport bike.We went with the narrower 120/90 x 18 in the rear—there’s only one front, a 90/90 x 21. To keep things in the family, we used Dunlop Heavy Duty MX tubes. For riders who want a larger rear footprint, there’s a 140 rear, too. 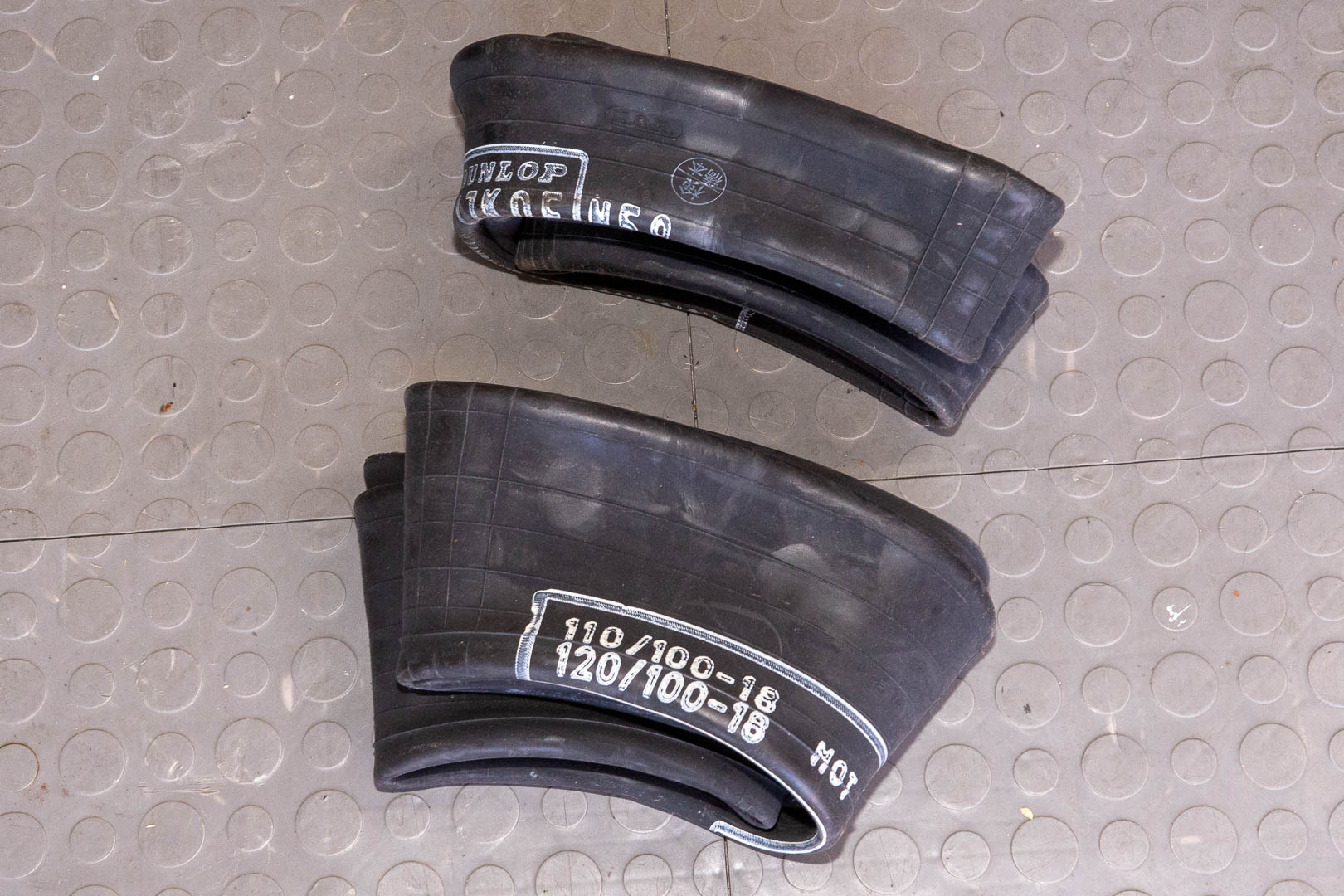 Dunlop describes the EN91 as a “hard terrain” tire. However, we used it on everything from pavement to sand—it’s a dual-sport tire, after all. The EN91 uses Dunlop’s “Block-In-A-Block” technology on side knobs, which we’ve had good luck with on pure off-road Dunlops, including the Geomax AT81 and MX33.Although the Geomax EN91 has the required shallow 15mm knobs, as the FIM requires, the widely spaced knobs look much more like a dirt bike tire than the typical dual-sport tire, including Dunlop’s venerable D606, which has one-third taller knobs that are more closely spaced.It didn’t take long for us to be sold on the Dunlop Geomax Enduro EN91 tires in the dirt. After a few miles to build familiarity, we started pushing the EN91’s limits. Impressively, the EN91 responded confidently, providing excellent feedback and fully predictable manners. 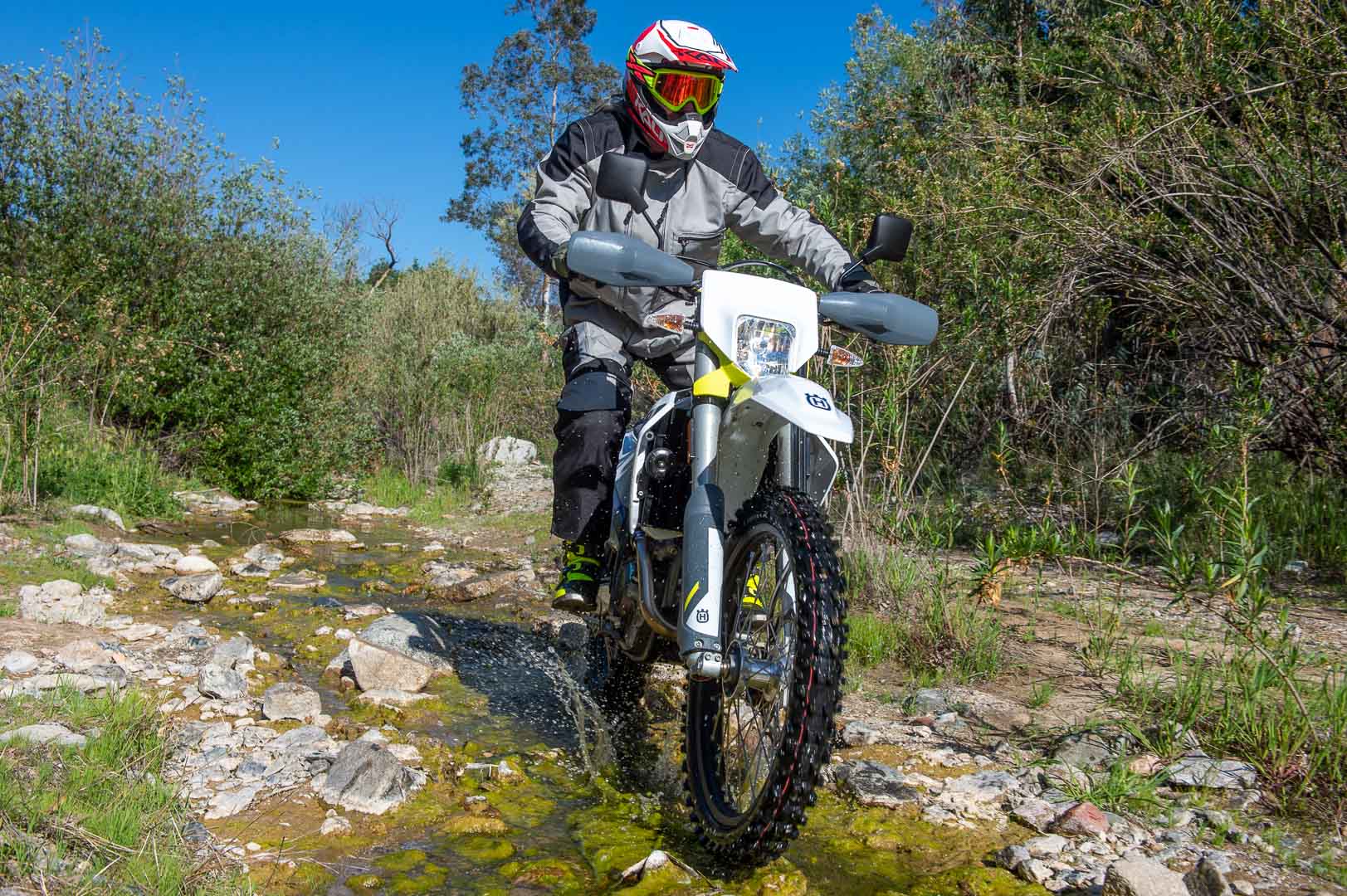 Hillclimbs in California can be mixed affairs, with loose stones, rock ledges, hardpack, soft dirt, and sand all on the same incline—a challenge for any rear tire. The EN91 immediately delivered confidence, as it seemed unperturbed by changing traction conditions. Yes, we were on the wonderfully smooth Husqvarna FE 350s, which helps. Yet, the EN91 always responded as expected.The side knobs were put under heavy scrutiny, as we hugged the sometimes-hard/sometime-soft cambered sides of the hill. The front and rear EN91s cling tenaciously to the side, while allowing the constantly modulated throttling needed to assertively roar to the top of the mountain.The rear EN91 has something Dunlop calls Tilt Crown Block technology. Basically, it means that each row has various knob angles. According to Dunlop, if one angle isn’t quite right for a specific condition, another knob will pick up the slack, particularly in rocky terrain. Given the rear EN91’s rocky hillclimb performances, we’re hard-pressed to dispute this claim. Dunlop claims this tread pattern works for mud. However, it’s the wrong time of the year for us to be testing that. 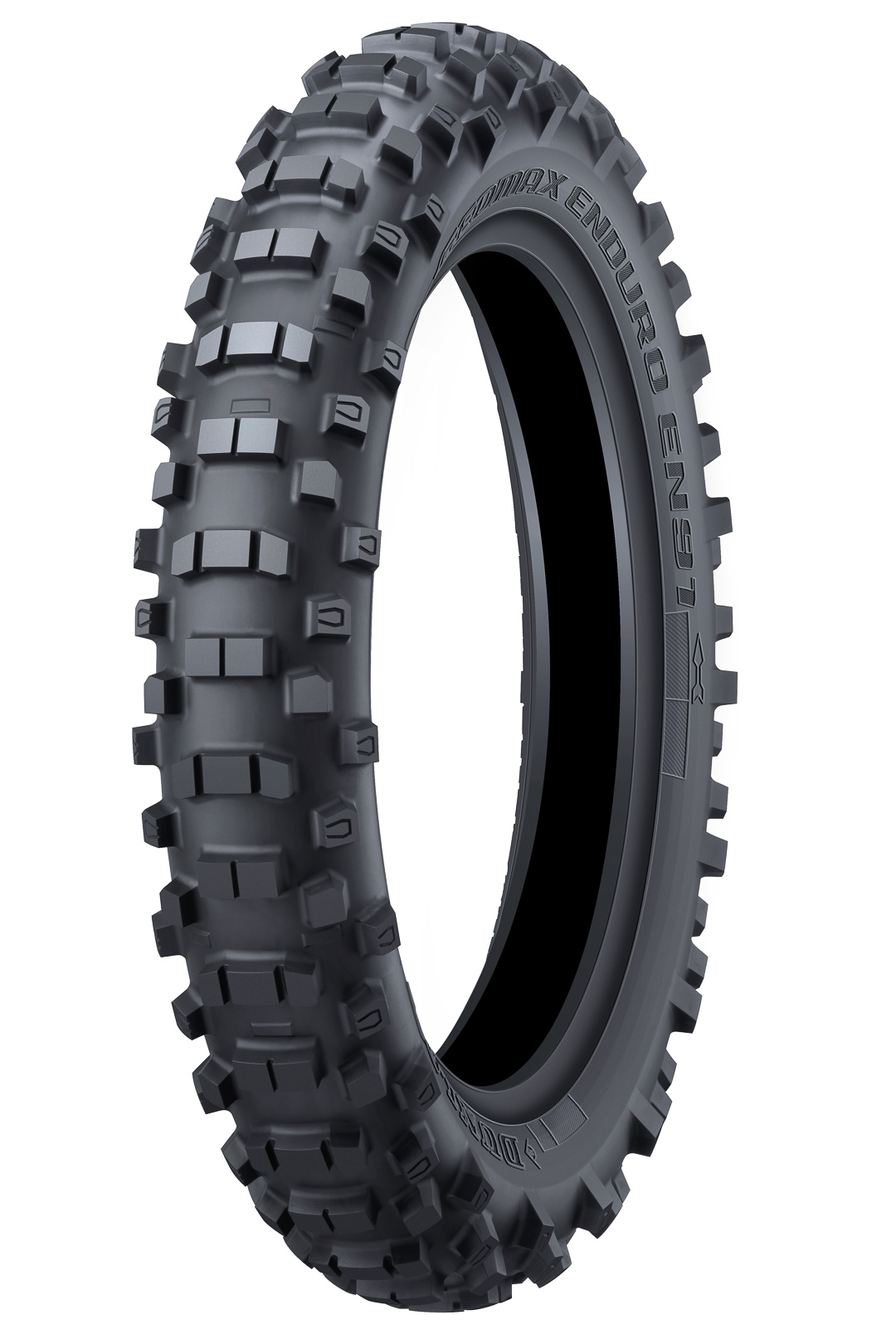 The front Dunlop Geomax Enduro EN91 is a sticky design. In instances when we thought we were going to lose the front end, the EN91 responded with uninterrupted traction. It is unconcerned with the type of terrain, always resisting washing out. The sidewall traction is especially remarkable—Block-In-A-Block isn’t just adspeak, as it works, even with shorter knobs.Transitions are handled quite easily at both ends. Again, in Southern California, conditions can change instantly, so an adaptable tire is essential. The EN91 acclimates seamlessly to changes, making it easier to concentrate on the job at hand, rather than be overly concerned with the action of the rubber.Braking is predictable with the EN91s, with the front tire doing more than its share of the burden. The rear can slide when needed, without any surprises.

With the shorter knobs, we expected it to be a bit easier to steer with the rear tire on dual-sport-friendly smoother dirt roads. However, we had to be more aggressive than anticipated with the Husqvarna FE 350s’s throttle to get the backend out on exits. Again, some of that is due to the smooth nature of the DOHC powerplant. We expect that a 500 will light up a 140 rear a bit easier.On the pavement, the Dunlop Geomax Enduro EN91 is as good as you can expect from such a legit knobby. The shorter knobs have plenty of poise in corners, as both the front and rear EN91s provide helpful feedback. Again, braking is predictable, and neither tire slid on the pavement, even during an emergency braking. 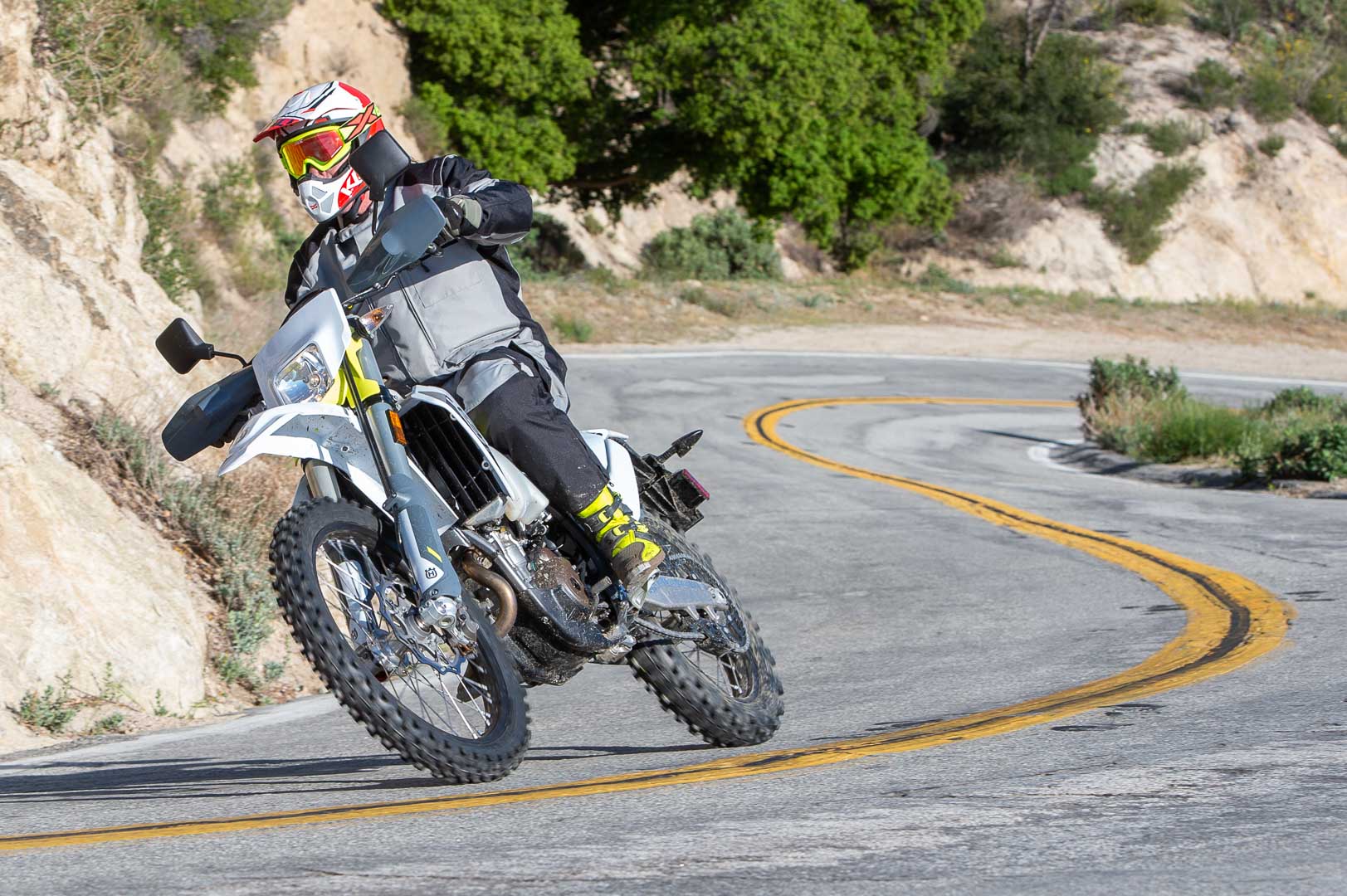 In one instance that snuck up on us, we didn’t miss our turn onto Angeles National Forest’s 6N07—a particularly long, rocky uphill road from Bouquet Canyon that the EN91s handles beautifully. A few hits on sharp rocks had us crossing our fingers, but the Dunlop tubes always held air—whew!We haven’t put enough miles on the EN91s on the pavement to evaluate wear, though they aren’t really a tire you’ll want if you intend to put lots of road mileage on them—go with the D606 for that.We were absolutely pleasantly surprised with the EN91. Previous FIM-approved tires have left us wanting more, yet these tires delivered in the dirt during a broad range of encounters. We would still stick with a purpose-built off-road tire for dirt performance if we weren’t concerned about the gendarmes. However, if we must be legal, the Dunlop Geomax Enduro EN91 doesn’t leave us feeling like we’re giving a lot up on a dual-sport motorcycle.