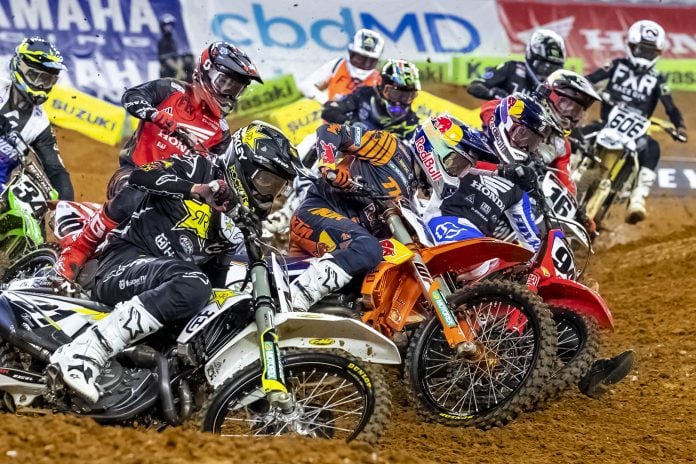 The easiest way to tell the motorcycle brands at a supercross or motocross race is by the color of the plastic on the racebike. Since 1996, there hasn’t been a disruption of the brand/color association. However, that is changing with a new brand at the starting gate for the 2021 Monster Energy Supercross season. Let’s look at the current colors and remind ourselves how long each brand has sported its distinctive tint; chronological order sounds good.Suzuki Yellow—1972. The first TM400 Cyclone from Suzuki was in 1971, and it was orange. That changed in 1972 when the three Suzuki TM models—125, 250, and 400—all came in yellow. Since then, Suzuki has stuck with yellow.Kawasaki Green—1974. Kawasaki could argue that its claim to green on the motocross track dates back to the 1969 F21M Green Streak. However, the Green Streak wasn’t truly an MXer. It sported trials-like block-patterned tires, and was something of a starting point for a racebike that could be adapted to the owner’s needs. The first authentic motocross bikes from Kawasaki were the 1974 KX450 and KX250, and Kawasaki has been green ever since.Honda Red—1976. The first Elsinores went with aluminum for their tanks, with some green paint. That changed forever with the 1976 Honda CR250 and CR125. Honda went red and has not strayed since.Husqvarna White—1983. From the 1960s, Husqvarnas sported an aluminum tank with various color accents—usually red. Plastic took over in 1983, and the Husky CR motocross line went white for good.KTM Orange—1996. KTMs started out with different colors for different sized engines. Eventually, KTM settled on white with various accents, including the notorious Mint Condition livery. Wanting to establish an unquestioned identity, KTM went to orange in 1996 and now closely identifies with the hue. Coincidentally, the year KTM went to orange was also the first year it won the 500cc Motocross World Championship with Shayne King aboard.Yamaha Blue—1996. The first Yamaha MXers, beginning in the 1960s, mixed and matched colors and displacements. Until 1974, you would see Yamaha MX bikes in red, black, yellow, green, steel, and aluminum. In 1974, yellow became the standard color on all the twin-shock MX models and monoshock YZs. From 1985 to 1995, Yamaha went with white plastic with varying shades of red for the seat. However, the YZs went blue in 1996, and they’re still blue—just ask the bLU cRU. Yes, we know Yamaha has had some special edition non-blue models over the last few years, including throwback yellow/black and white/red color schemes. 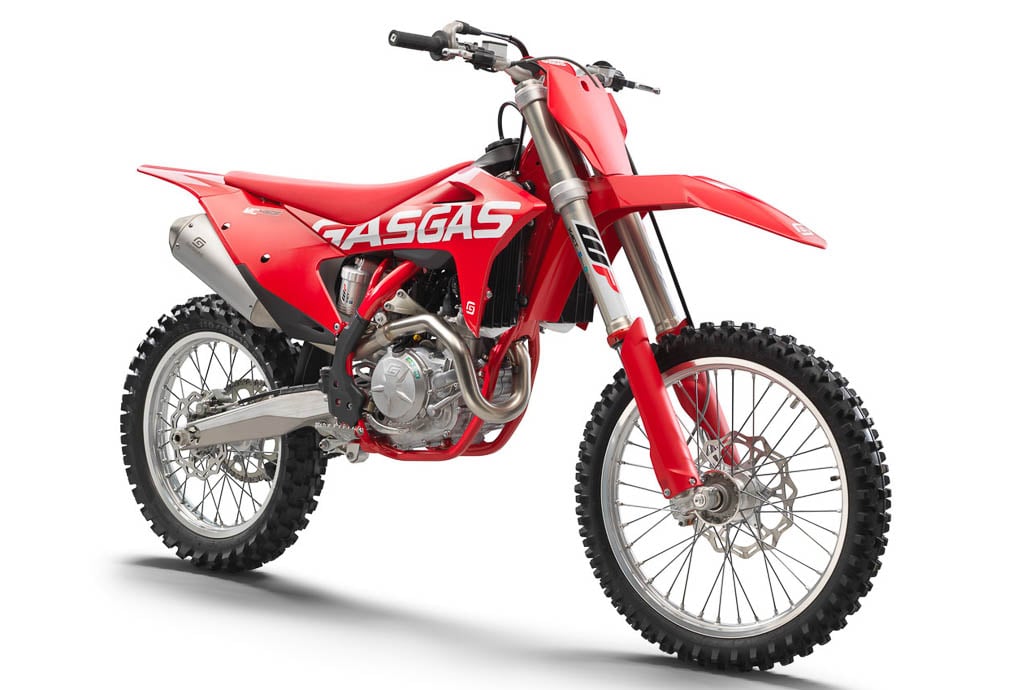 GasGas Red—2021. GasGas, which is owned by the same parent company that owns KTM and Husqvarna, will be lining up with very red motorcycles at the 2021 Monster Energy Supercross opening round at NRG Stadium in Houston. It will be the first time GasGas motorcycles will be raced in Supercross. Justin Barcia will be the sole member of the 2021 Troy Lee Designs/Red Bull/GasGas Factory Racing Team riding the MC 450F in the premier class.Photography courtesy of the manufacturers and Mecum Auctions