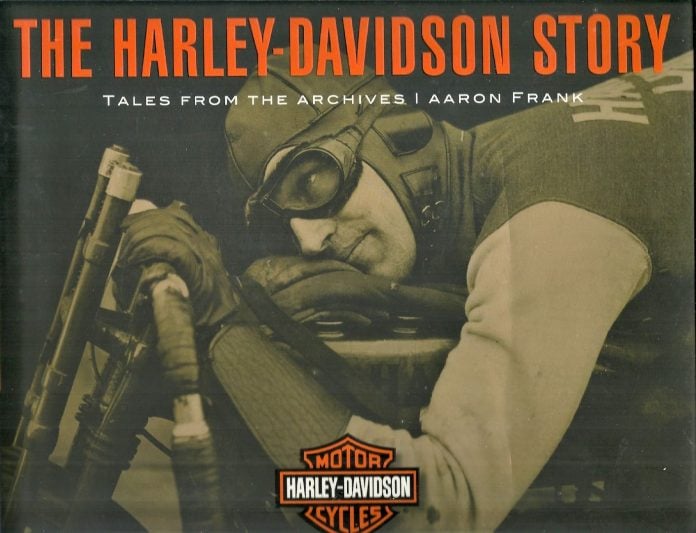 Fact is, I have at least 42 books on my shelf devoted exclusively to Harley-Davidson and probably a couple of dozen others that dedicate a chapter or two to the brand.With all that literature on the Motor Company already in hand, I would have been difficult to convince that there could be one that had both new and surprising information, as well as the story, told in a fresh and fascinating way. And I would have been wrong.Turns out, Milwaukee’s own Aaron Frank has done both. With unfettered access to the depths of the Harley-Davidson Archives housed at the company’s spectacular museum in Milwaukee, Wisc., Aaron Frank has created a piece of literature that is a visual achievement with its 159 images as well as a literary classic in its concise, conversational narrative.If you thought you had Harley’s history, industrial diversity, and technological range down cold, you may be in for some surprises. To be sure, Frank’s book does justice to the topics you’d expect to see in a book that purports to tell the Harley-Davidson story.He covers the company’s formation, the earliest days right down to Serial #1, the company’s first V-twin, the eight-valve racer, and on up through the legendary models like the knucklehead, the Servi-car, Hydra-Glide, XR-750, and the superbikes that never were—the Project Nova bikes—and more.But there are some aspects of the Motor Company that aren’t always covered, such as the company’s dealer development program, Joe Ryan’s service notebooks—the foundation documents of what would become the Harley-Davidson Service School—a look into Otto Walker’s scrapbook (Walker was one of the first “factory” race team members signed to the H-D wrecking crew in 1914 and was also the first racer to average more than 100 MPH flag-to-flag in a race in 1921).Personalities like Joe Petrali, who set land speed records with the knucklehead, and Walter Villa, who won double (250 and 350cc) GP Road Racing World Championships for Harley on its Aermacchi two-strokes in 1976 and others are covered, as well.The book reveals some really unexpected technical aspects of the Motor Company. For example, did you know Harley-Davidson manufactured rocket engines for thirty years? It’s true; the York, PA, Harley plant manufactured more than 5,000 LR-64 rocket engines for supersonic target drones, dating back to the 1960s! Makes the idea of the Motor Company building snowmobiles, golf carts, and electric motorcycles seem like light work, doesn’t it?Aaron Frank’s look at Harley-Davidson through the years by showing us some of the rarely-seen treasures in the company’s massive archive is enlightening, entertaining and, perhaps best of all, surprising.Book Data: