Home Motorcycle Types Motocross / Off-Road Cardo Packtalk Black and Prototype Headset Review: Racing Intercom
Facebook
Twitter
Linkedin
Pinterest
Email
Print
WhatsApp
ReddIt
Cardo has been well known for its high-quality helmet-to-helmet communication systems for over a decade. Cardo uses Bluetooth technology in both is Packtalk and Freecom intercom systems, and now it is using that same technology to connect off-road racers to their pit crews.We tested a pair of Packtalk Black units with a prototype Cardo headset. The coach headphones aren’t a helmet-to-helmet system. Instead, it is a headset for a mechanic, trainer, or parent in the pits to communicate with the rider while on the track. Basically, the headset allows a Cardo Packtalk unit to be mounted on it.Rider-to-pits voice contact works much more efficiently than using a simple pit board that can only display a few simple words that the rider may or may not be able to read as he speeds by. Having two-way communication allows the mechanic to give the rider lap times as they would on a pit board, plus what they can’t fit on a pit board, including safety issues such as a rider down. It can also be used to give the rider information that may help him in the race, such as better lines another rider might be using or information on competitors closing from behind.When we received the Packtalk Black units, we started by mounted one to a helmet. It’s simple to mount the unit on the helmet’s lower-left edge and run the speakers into the ear gaps in the helmet’s interior lining. We did have a slight issue with the speakers pushing on the ears with our rider’s favorite helmet—the Bell Moto 9.After talking to a Cardo tech, we were advised to mount the speakers lower in the Bell. This helped considerably in the comfort level, but still rubbed on the ears a little. Next, we tried it with the Shoei VFX-Evo helmet, which has much larger ear cavities. With the Shoei, we didn’t feel the speakers at all. The microphone mounted nicely on both helmet brands. We followed the pairing instructions and were ready to go.I tested it with Ultimate Motorcycling Editor at Large Ty Cullins, who competes in the Pro class in the AMA EnduroCross series. Ty also races motocross for cross-training. We used it for practice and training days to give him his lap times, how much time he had left in his practice moto, and what things he could work on. To communicate, I didn’t have to be right next to the track. I could be up higher to see the whole circuit and what he was doing at each portion of the track.On smaller, shorter, compact tracks, the Cardo Packtalk Black worked perfectly for the entire course. However, on the long Glen Helen Raceway course, the range didn’t reach the remote ends. We preferred to pick a small portion of the track where I would give him the needed information.The prototype Cardo headset has a good fit, and is comfortable to wear for hours at a time. Sound volume for the rider is easily adjusted, as can the volume on the mechanic headset. The sound is clear at both ends—the Packtalk Black uses JBL speakers—and we could easily understand each other. We ended up taking the microphone out of the helmet as it worked best to just have one-way communication.With a unit such as the Cardo Packtalk Black operating as the communications device for both the rider and the mechanic/coach, there are many different options for use in training. Thanks to the mesh communications options, a coach could talk to as many as 14 Cardo-connected riders on-track simultaneously—a fantastic feature for riding schools. At the same time, the riders could communicate with each other—which has its strong points and downsides.Because the Cardo unit is detachable from the headset, a riding coach could hop on a helmet equipped with the Packtalk Audio Kit ($79), snap on the Cardo Packtalk, and ride while coaching. It is a highly flexible and scalable system compatible with the $50-less-expensive Packtalk Bold, which we have reviewed. The $390 Black unit is more stylish, though otherwise identical—maybe worth it for the helmet, but not the headset.The Packtalk Black unit is claimed to be waterproof, though we haven’t had a chance to test that. While it has endured the rigors of a motocross track, we have not crash-tested it, and have no plans to do so. The battery life claim is 13 hours. No training session lasts that long, so we never came close to running the rechargeable internal battery out. 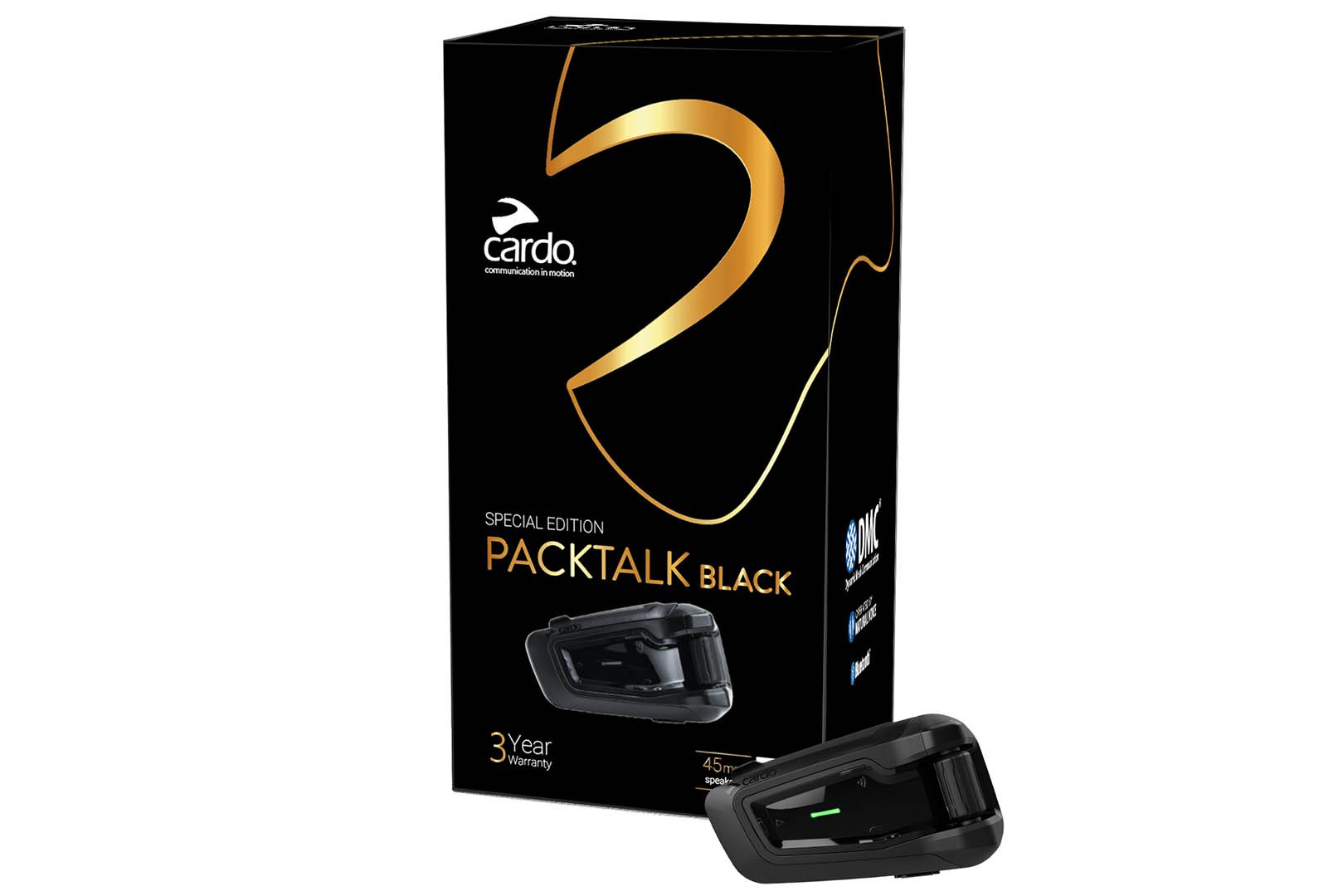 Cardo had several racers and mechanics use the Packtalk Black at the 2019 Monster Energy Cup. The AMA has a rule against in-helmet communication with riders, so it can’t be used in AMA-sanctioned Supercross. However, the Monster Energy Cup is not an AMA-sanctioned event, so teams were free to use it.I would like this system to be available for use in competition, but our races are AMA-sanctioned. It would be great to sit in the stands and see the whole track, allowing me to provide race position, lap times, and lap countdown to Ty as the race progresses. As it is, I’m in the mechanics’ area, seeing one small portion of the track, trying to give Ty short messages as he flies by.In the meantime, we will use the Cardo Packtalk Black and prototype headset to make training days more productive and wait for the AMA to join the 21st century.