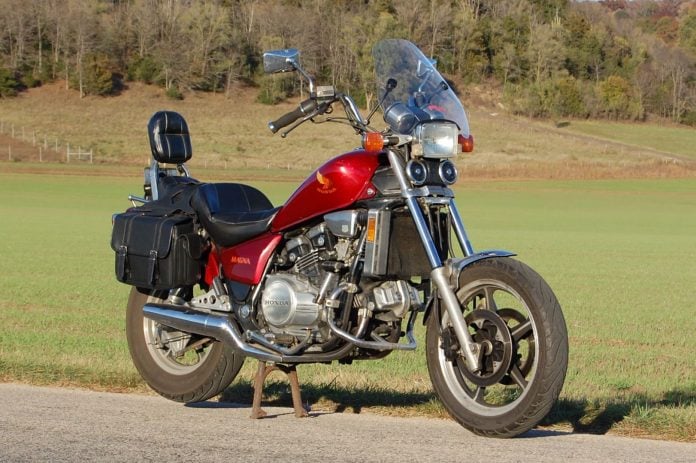 Say what? Harley built Hondas?Well, no, not in so many nuts and bolts. But back in the early 1980s, Harley-Davidson did take some actions that led directly to a series of bikes from Japanese motorcycle manufacturers as a result.They are sometimes referred to as the “tariff bikes.” 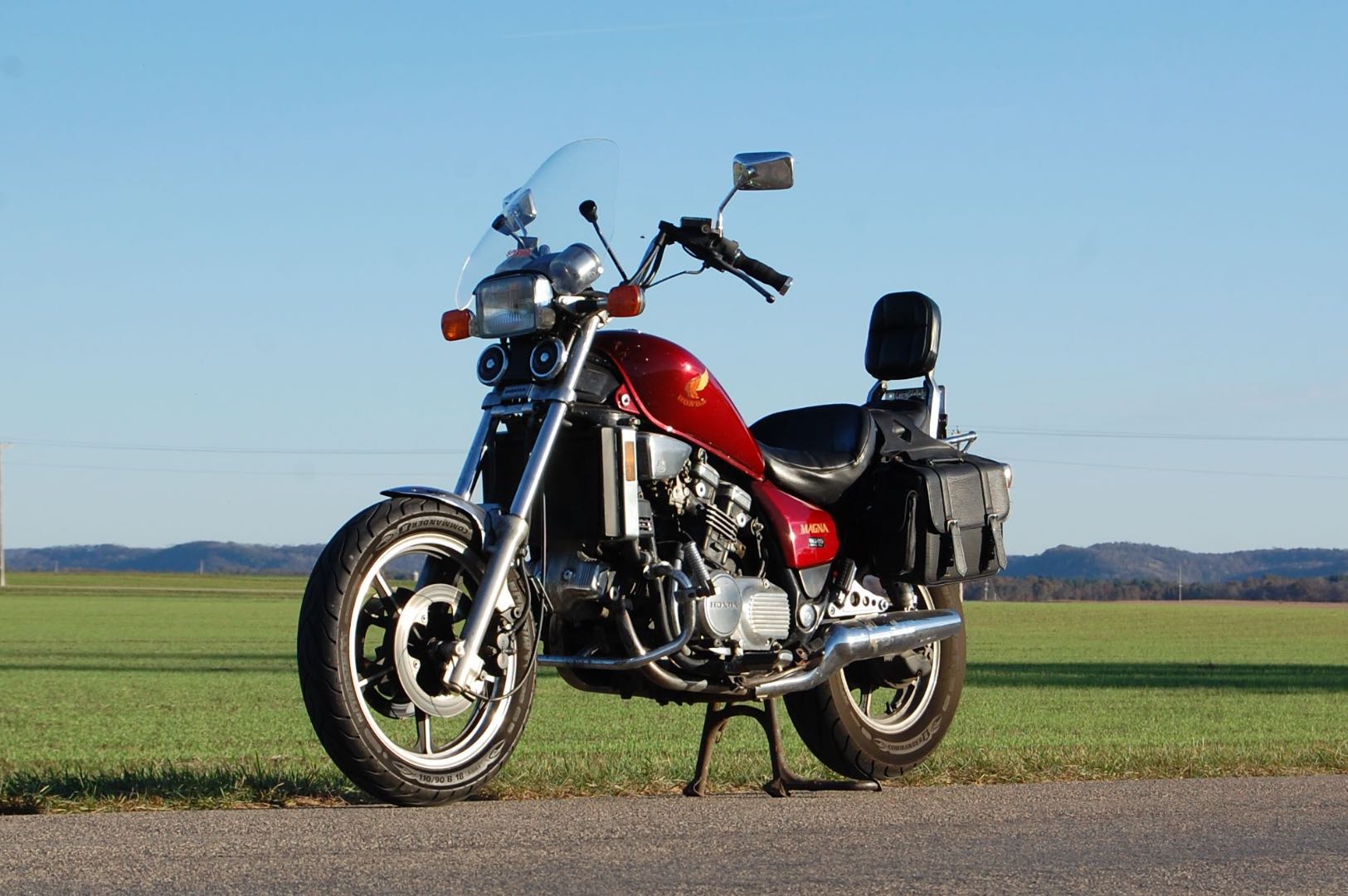 Here’s how it went:In April 1983, President Reagan signed into law an act that raised the then-current import tariff of 4.4 percent to 49.4 percent and would keep it there for a year; lower the rate to 39.4 percent in the second year, to 24.4 percent in the third year, to 19.4 percent in the fourth year, and to 14.4 percent in the fifth year with the tariff returning to 4.4 percent after the fifth year.The tariff plan focused on motorcycles with engines displacing 700cc or more and almost entirely on Japanese manufacturers. It resulted from a lobbying effort by Harley-Davidson intended to help the company counter what it said were “dumping” practices of the affected import manufacturers.Some sources credit the tariff with helping Harley-Davidson mount a sensational come-back that lasted well into the 1990s. Others say the release of the Evolution engine was the most important factor in Harley’s resurgence. It may well have been a little of both.Either way, the Japanese manufacturers didn’t take the tariff lightly and it didn’t take them long to counterpunch. Several took their bikes in the 750cc class and retooled the engines to displace just under 700cc; making them immune to the financial impact of the tariff.One of the bikes that arose from the tariff war of 1983 was the VF700C or V40 Magna (actual displacement is 699cc or 42.7 ci), which debuted in 1984. Ironically, to emphasize the company’s technical derring-do and a bit of defiance, the 699cc version of what had been the VF750C V45 Magna up until that time not only came without the tariff on the price tag, it came with claimed output of 82 crankshaft horsepower at 9,500 RPM—up three horsepower from the 750cc (actual displacement 748cc or 45.6 ci) version of 1982.Where did the extra oomph come from despite a decrease in displacement? It’s not readily apparent from the engine internals’ vital statistics. The bore was the same for both versions, 70mm (2.75 in.) but the stroke was shortened from 48.6mm (1.9 in.) for the 750 to 45.4 mm (1.79 in.). 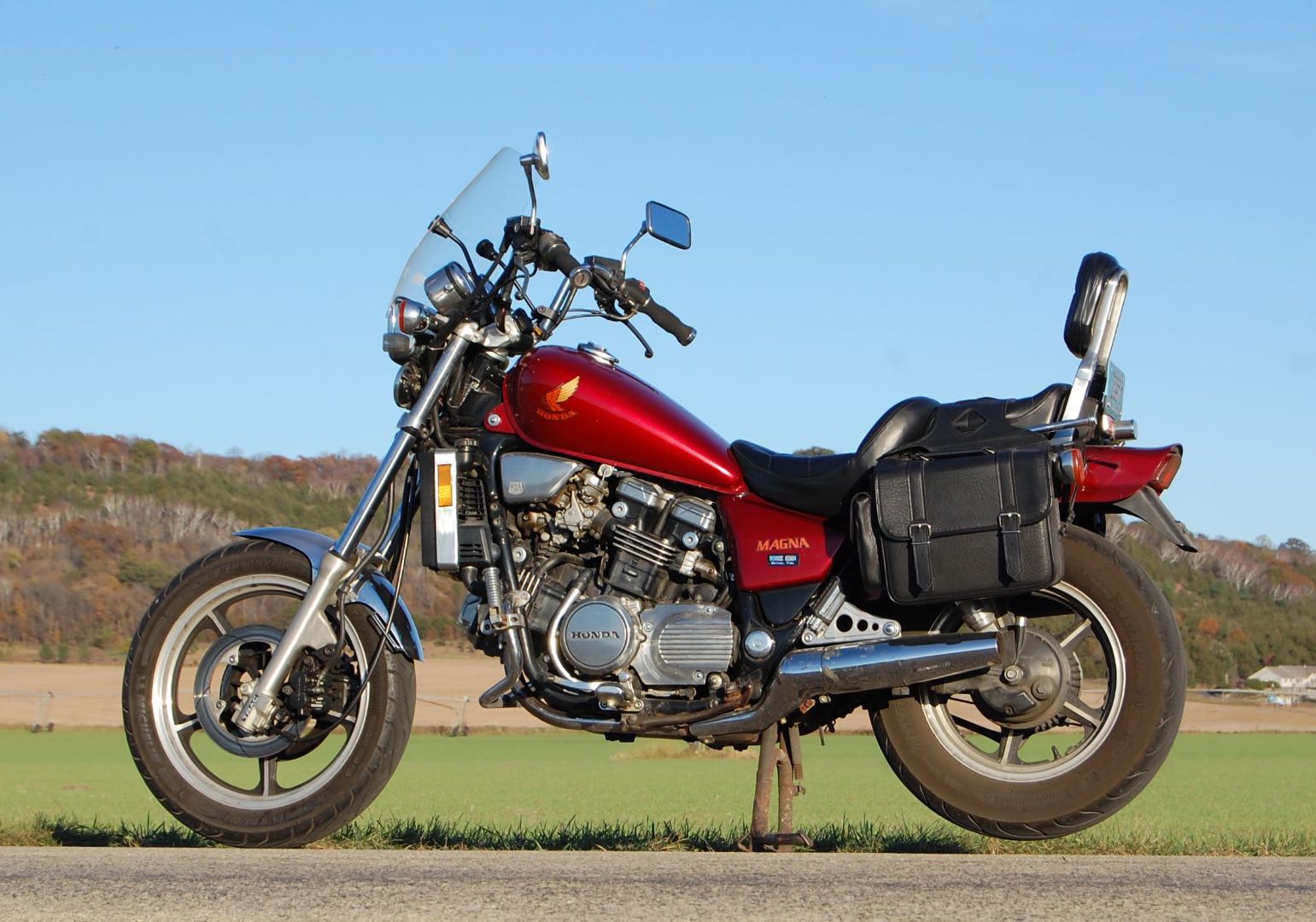 Cam lobe heights were actually slightly reduced in the 700 models from the 750s. Intake and exhaust valve diameters remained the same for both models—with four valves per cylinder. Compression ratios for both models remained the same at 10.5:1. Some may have come from leaner factory main jetting on the ’84 to ’86 700cc models.The original four VD50E Keihin constant velocity carburetors are still in place as are the stock twin mufflers on the four-into-two exhaust system. Unlike a number of the Honda models from the 1970s that had their OEM exhaust systems rot off in only a few years, the Hondas of the 1980s had exhaust systems built of much stouter stuff.The OEM mufflers are still in place and the exhaust note is still quite quiet at idle, but put out a pleasing howl at high RPM. The bike still averages between 44 and 48 MPG in all-round riding.The 1985 VF700C didn’t represent other huge technical or styling changes from the pre-tariff models. It featured a liquid-cooled, double-overhead cam 90° V4 engine that spun out speed without breathing hard and ran buttermilk-smooth without the added weight of a mechanical counterbalancer.Power is channeled through a quiet-shifting six-speed with a wet multi-plate clutch that is hydraulically activated and shaft final drive with helical gearing in the rear-drive unit. In the years I’ve owned this Magna, twelve of its thirty-five years in service, I’ve only had to do two non-routine maintenance repairs.The seal on the hydraulic clutch activator finally started to leak, requiring a surprisingly easy replacement back in 2014. As far as I can determine, that means the hydraulic clutch activator piston seal lasted 29 years. Imagine that—29 years and right away—trouble.Last summer, the fork seals on the air-adjustable fork units finally started to leak, so those and the front brake pads were replaced. The first time each of those were done in the years I’ve owned the 700. Other than that, it’s been no more than normal maintenance; battery, tires, plugs now and then.This Magna was a road-side find for me and it had been well-maintained by its original owner. As near as I can tell, it has never been dropped or repaired from a collision. The paint and chrome are pretty much scratch-free and shine up like new with a wash and wax. The alloy parts have some surface oxidation and if I had a bit more ambition, they would probably buff up to a like-new appearance, as well. 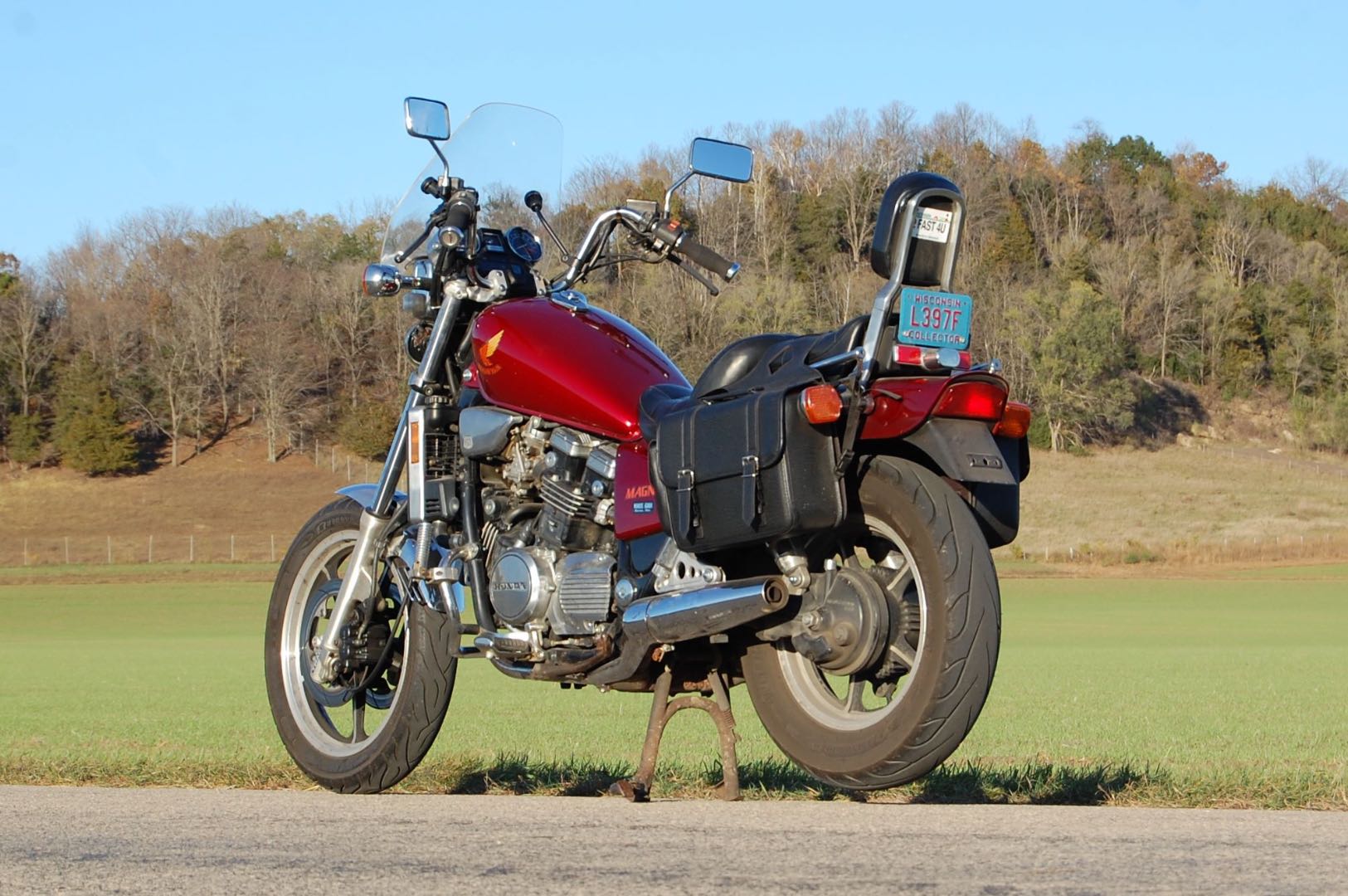 The Magna’s features were pushing the state-of-the-art for a production cruiser in its day. It was among that early generation of power-cruisers with factory-custom styling cues and high-performance compact V4 powerplants.From the side, the tank looks very lean and sleek; from the saddle, the tank is wide. It is tilted up on a frame that rises to the steering head that kicks the long forks out in front. Those forks work with the Honda TRAC (Torque Reactive Anti-dive Control) anti-dive front suspension.Double twin-piston disc brakes handle stopping chores up front with light, progressive feel to this day. The rear brake is a more traditional non-ABS mechanical internal expanding drum brake that has the power to lock the rear wheel pretty easily, which is something of a problem. The rear brake has little progressive feel, so in hard stops, there is a tendency to lock up. Under normal braking the thing works fine.One thing that surprises me in the layout of the riding position is that even somebody short (5’-5” or so like me) can feel a little cramped with the seat and footpeg locations. Even more surprising is the fact that the original owner and his wife were both over six feet tall and they said they didn’t find the ride unduly cramped. They had added freeway pegs mounted on engine guards, but they really don’t add much room to unfurl. I find myself sliding up on the passenger seat or standing on the pegs once in a while to stretch out.The handlebars are another matter. They are medium-rise buckhorn-style items that are really comfortable for me and don’t require a long reach nor impose a cramped feel.Instrumentation on the 700 includes analog speedometer, tachometer and engine coolant temperature gauge, and lights for oil pressure, neutral, turn signals, tail light burn-out and a light the illuminates “OD” to let the rider know the transmission is in 6th gear, but there is no gear position indicator. After 35 years, everything in the cockpit still functions.The seat is a two-piece item requiring a key to unlock and remove. The upholstery has held up amazingly well, with no tears or splits and it is still deep, resilient and comfy. The factory padded backrest has not done as well, with the seam at the top of the backrest coming apart and requiring repair—but it is still in use. Ride comfort other than a somewhat confining seating position is excellent, even with two up. The original twin rear shocks are still in use.The wheelbase is 61.6”, making for solid open-road stability but the low-speed handling relatively light and nimble, as well. Weighing in at about 535 lb., the Magna is easy to handle around town and in parking situations, including levering it up onto its center stand.When I first started riding the 700, it seemed almost too docile, especially compared to the 1984 VF500C Magna that I acquired before it. The little 500 accelerates hard with a little aggressiveness on the throttle. The 700, by comparison, seems to be set up for smooth, laid-back touring style acceleration. As I would learn over time, the 700 can get pretty exciting, but you have to wring that throttle and hit shifts above 9,000 RPM.As I write this, the old Honda has 43,702 miles on it—as far as I can determine, all original miles. In addition to being one of my regular day-trip mounts, the VF700C is currently a test mule for our long-term review of a set of Michelin Commander II tires.I’ve added only a Slipstreamer Spitfire windshield and set of medium-sized day trip throw-over bags to the Magna. Though the bike has excellent long-range touring credentials, most of my miles are day-trips and short-haul rides that have me home at the end of the day. For that kind of duty, the VF700C Magna is a great bike. 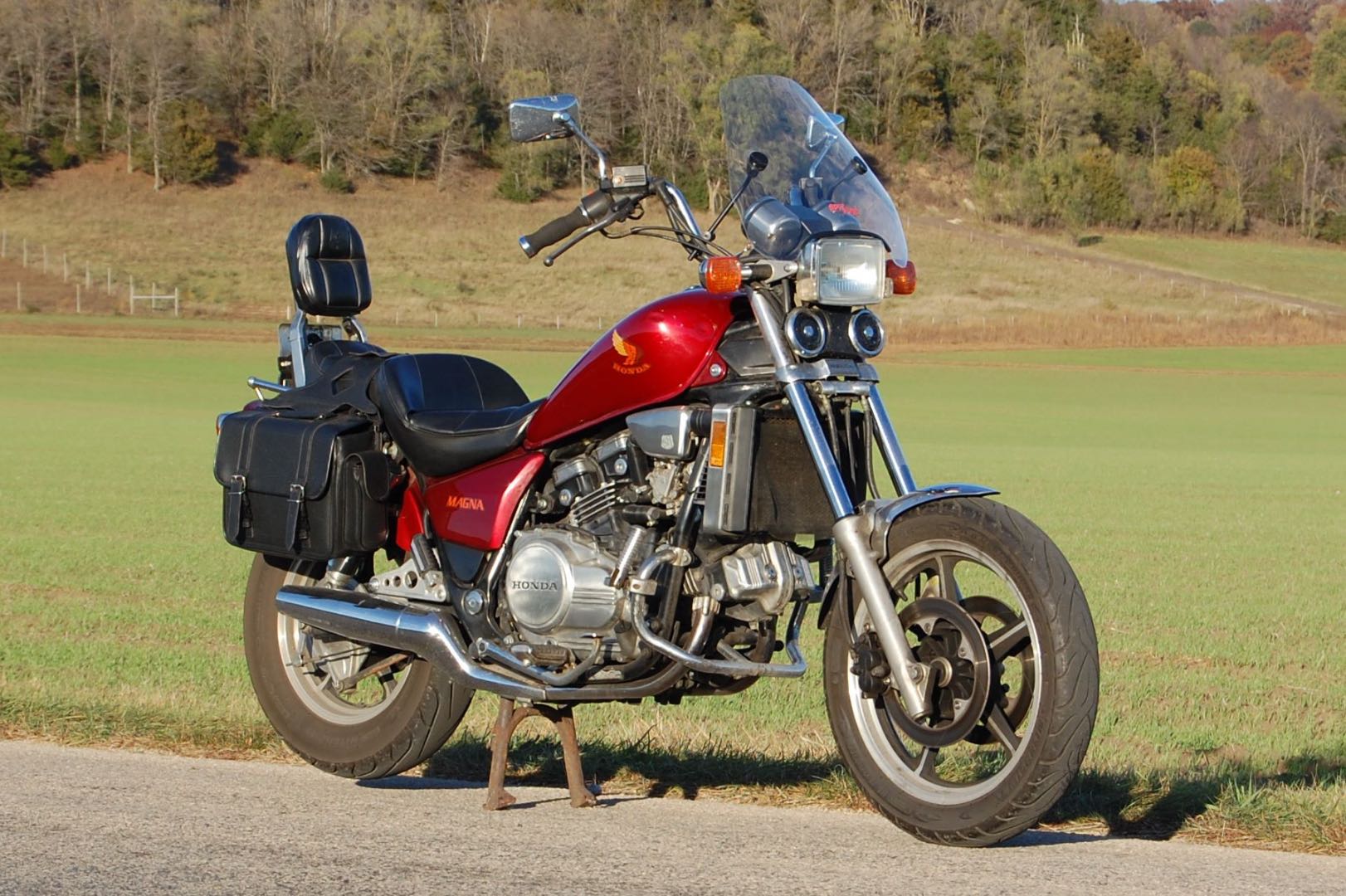 According to the Comprehensive Vintage Motorcycle Price Guide 2015-2016, a 1985 Honda VF700C could bring about $3,100 in condition 1 (basically showroom condition) and about $1,900 in condition 3 (good, clean road-ready). So, in terms of value for performance, the old Magna could be a pretty good buy if you can find one in good to excellent condition.The DOHC V4 engines in these bikes are not necessarily for beginners if you’re in the market for a really cheap fixer-upper in need of serious engine work. So, if you’re not an experienced mechanic with some of the specialized tools that are required, the Honda V4-powered models may not be the best to start out with.We recently took a look back at two other Hondas that had reached the 35-year mark; the 1984 Honda V30 Magna and V65 Sabre. Check that out here: 1984 – George Orwell Got it Wrong, Honda Got it Right.