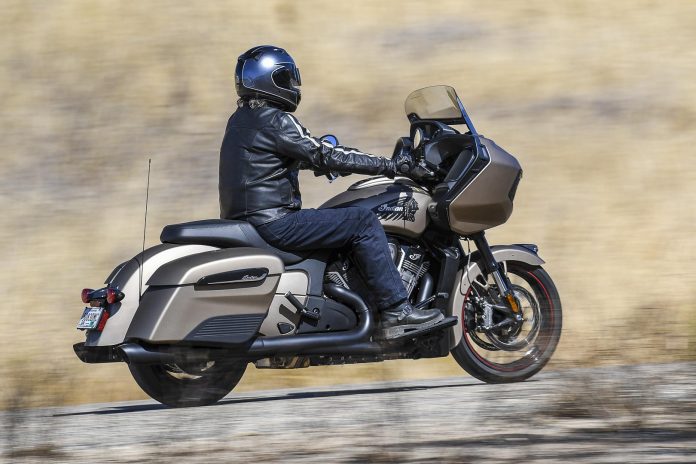 If you have read my columns for any length of time, you might have noticed that I don’t have a lot of stories about things going wrong. As it turns out, I don’t have many of those stories in my decades of riding motorcycles. I tend to be cautious, plan well, and make good decisions. Yeah, I know, I’m missing out on a lot. As it is, I ride and have fun, and definitely enjoy things going according to plan.Testing the new 2020 Indian Challenger Dark Horse this month allowed me to delve into the world of unforeseen consequences. One little choice after another can make a big change in a ride. 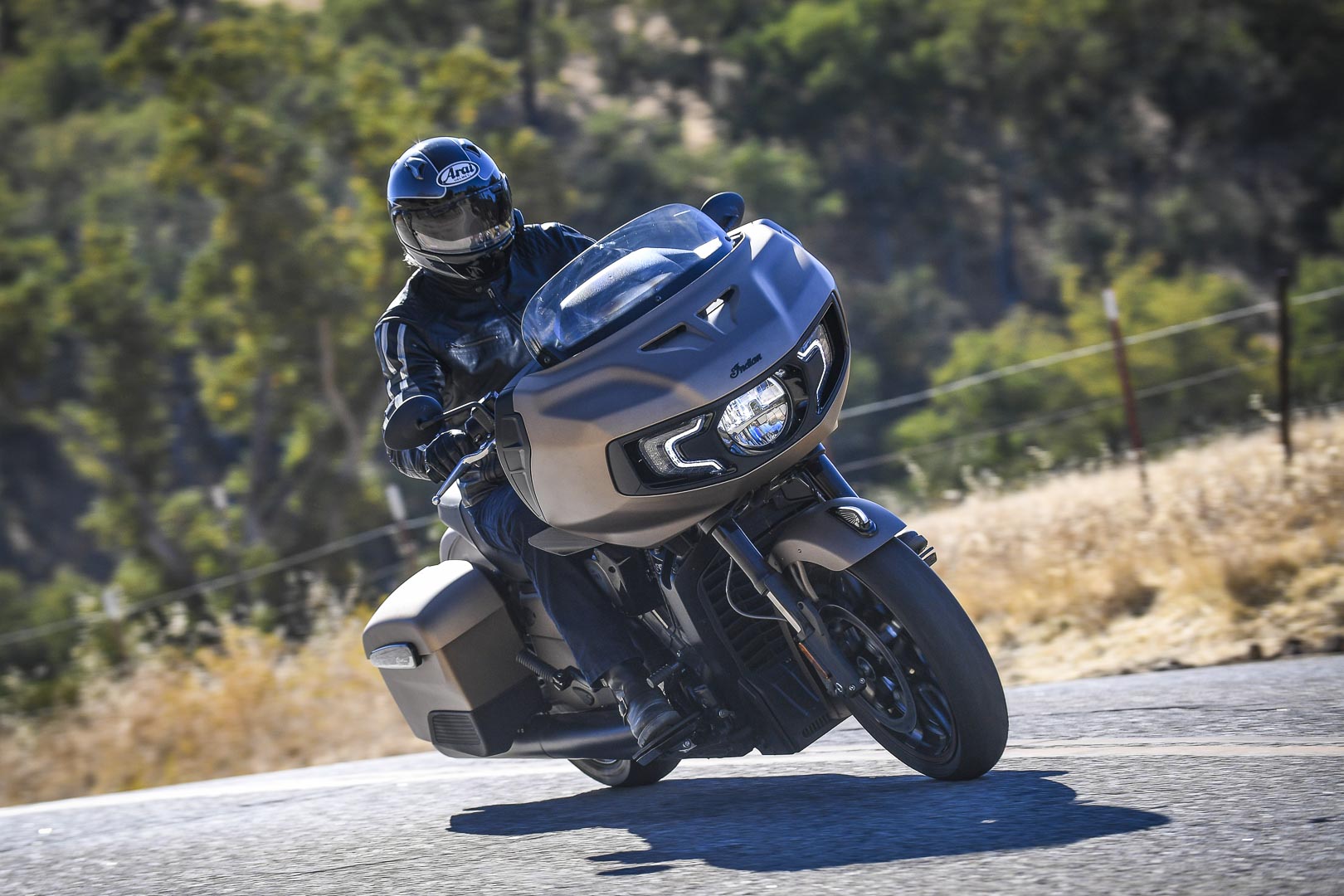 Our last photoshoot of the ride was in the hinterlands of Paso Robles, with the day’s final destination being Santa Barbara. It’s a couple of hours of riding on U.S. Highway 101—no big deal.As I was heading east on Nacimiento Lake Drive, the Challenger’s navigation system unexpectedly told me to turn right at Oak Flat Road. I take a quick look, and decide that maybe it’s a shortcut. I jam on the dual-disc front brakes, engaging the ABS, and manage a right turn onto Oak Flat Road.As soon as I’m on, the pavement ends. The road is too narrow for an easy U-turn, so I decide to test the off-pavement acumen of the Challenger. Happily, it is an excellent dirt road, and the Challenger never got squirrely as I tooled down it. Eventually, pavement returns, and it spits me out back on Nacimiento Lake Drive, a mile or so closer to Paso Robles—some shortcut.Rejoining the main byway, I realize that the nav system repeated the same pathology it exhibited the previous day in Monterey. Seemingly on a whim, instead of directing me to my destination, it attempts to send me back to the starting spot of the ride. Thanks, but no thanks. As a past president famously said, “Fool me once, shame on, shame on you. Fool me—you can’t get fooled again!” So, off goes the navigation system. I know how to get to the Hilton Santa Barbara Beachfront Resort on my own.Okay, so I lost a couple of minutes. No big deal.Nacimiento Lake Drive morphs into 24th Street as I approach downtown Paso Robles. As I hit Spring Street—Paso Robles’ main drag—instead of heading straight for the 101, I take a few extra minutes to ride down Spring Street and enjoy the sights of historic Paso Robles. Time well spent, of course.Joining the 101 south of town, I wick it up and do some high speed touring on the big bagger. There are a few slow spots in San Luis Obispo, but the real traffic hits coming into Pismo Beach.At that point, freestyle motocross pioneer Carey Hart, who was also on the Indian-organized ride and aboard a Challenger, catches up to me and passes me—no surprise there. I let him lead the way, creating a wake as we split lane for a few miles. Hart eventually disappears in the distance, as a couple of holes close before I can follow him through.Traffic opens back up south of Arroyo Grande, and I find myself riding alongside an English motojournalist. We cruise along together at a high rate of speed, enjoying the perfect weather.It is a bit warm, and the lane splitting antics left me a bit thirsty, so I peel off of the 101 at Los Alamos for a Diet Coke. The line at Collins Market moves slowly, and as I exit, my riding companion bids me farewell. Unfortunately, for him, he went back the way we came into town. While there’s an exit off the southbound 101 north of Los Alamos, there’s no corresponding onramp. But, he has GPS, and the area has few roads, so I’m confident he’ll figure it out. 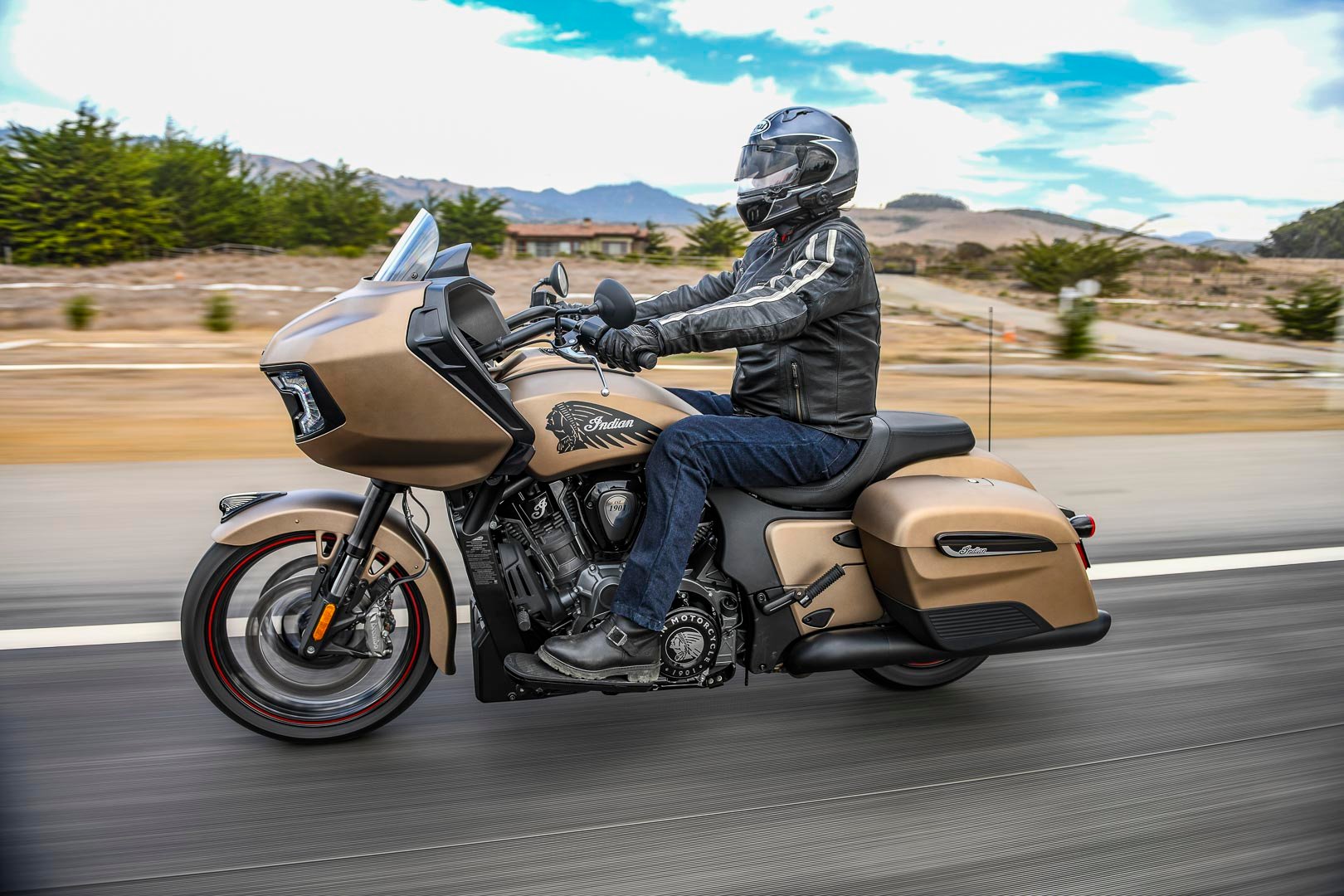 I finish off the drink, and I’m back on the road a few minutes later. Make sure you add those on to the minutes spent on Oak Flat Road and Spring Street.After a few miles, I’m joined again by the Englishman, as predicted. When we get to California Highway 154, I decide not to take that turn-off. It’s a fun road to Santa Barbara, but it is late in the afternoon on a weekday, and I know it will have too much traffic to be an enjoyable ride. I decided the 101 along the coast is preferable, and my riding partner follows me, even though his navigation system told him otherwise. He figured I had local knowledge, which I do.All is well on the 101 until the Pacific Ocean comes into view at Gaviota. At that point, we are hit with brutal gusty winds—the kind that could knock a motorcycle down. I drop from the 80s to the 60s and hold on. The Challenger was fine with the wind, but I felt like I was going to be blown off.As I struggle to stay on board, I notice smoke in the sky. There’s a brush fire ahead—not a good sign.We battle the wind for miles, and just as it starts to subside, we’re met with a CHP traffic break. It takes about a half-hour to go a half-mile or so, and we are led off the freeway by the CHP at Refugio State Beach. The 101 is closed, and we have to turn around.Those lost minutes ended up mattering. Had I not gone down Oak Flat Road, Spring Street, and stopped in Los Alamos, I would have beaten the closure and had an easy ride to Santa Barbara.Instead, we get another ride through the wind tunnel and back up the 101 to Highway 154, which I had passed about an hour earlier. At this point, we’re low on fuel and have to splash some in to make sure we get to Santa Barbara without sweating it.My prediction about a crowded 154 comes true, with a twist. Because the 101 is closed in both directions, the traffic is building up on both sides. By the time we hit the summit and Camino Cielo, it is especially ugly on the oncoming westbound 154. Even for our side, that means something of a crawl down the hill back to the 101 in Santa Barbara.We’re not done yet, though. Traffic stops on our side of the 154 as we approach the poorly designed interchange. Some lane-splitting brings us to a large truck with its brakes on fire—another person is having a bad day.Finally, we hop on the 101 south, and there’s no more drama on the way to the Hilton. Whew! We do get there after dark, so the folks at Indian were wondering where we were at. At least there were two of us, so it wasn’t quite as worrisome as it might have been.So, even with my planning and careful choices, I had a ride with a few unexpected twists due to a couple of short delays. And, I get a story for my column!