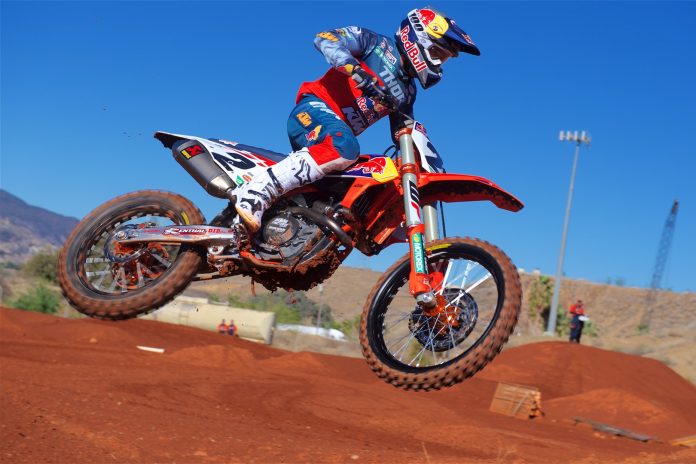 Due to a knee injury suffered at the Unadilla National last Saturday, Red Bull KTM’s Cooper Webb will not finish the 2019 Lucas Oil AMA Pro Motocross National Championship season. The 2019 Monster Energy AMA Supercross champion suffered a bone bruise in his knee, along with hyperextension and fluid build-up. Surgery will not be necessary, but Webb will miss the last two 450MX National rounds at Budds Creek and Ironman.Webb went into the Unadilla National in P4 in the standings, 11 points behind Team Honda HRC’s Ken Roczen. DNFing the opening Unadilla moto and a DNS in moto 2 dropped Webb into P6 in the standings. With four motos remaining, Webb has a 72-point lead over Justin Barcia.Webb earned his first 450MX National moto win in the first moto at the Spring Creek National. That win was followed by a win in moto 2, giving Webb his first 450MX National overall victory. Webb had seven podiums in the 2019 Nationals, including three of the last four motos he finished before his knee injury at Unadilla MX.Although Webb is out for the AMA Nationals, he is expected to be back in racing condition by the Monster Energy Cup at Sam Boyd Stadium in Las Vegas on October 19. Webb struggled at the 2018 Monster Energy Cup in his KTM 450 SX-F Factor Edition debut, finishing in P12, with his best performance a P6 in the opening Main.Photograph by Don Williams