A few months ago, I was out riding in Southern California’s Santa Monica Mountains when I met Jose through some mutual friends. We got to chatting a bit and compared notes on our shared enthusiasm for everything motorcycles.

I learned he worked in Marketing for MV Agusta. I told him I was an instructor at the Yamaha Champions Riding School and an occasional contributor to Ultimate Motorcycling, among other moto interests. I encouraged him to take our school sometime, and he asked me if I’d be interested in riding a new 2019 Turismo Veloce Lusso SCS for a few days and writing about my experience from the “man on the street” perspective—this conversation was going really well. I accepted, of course. 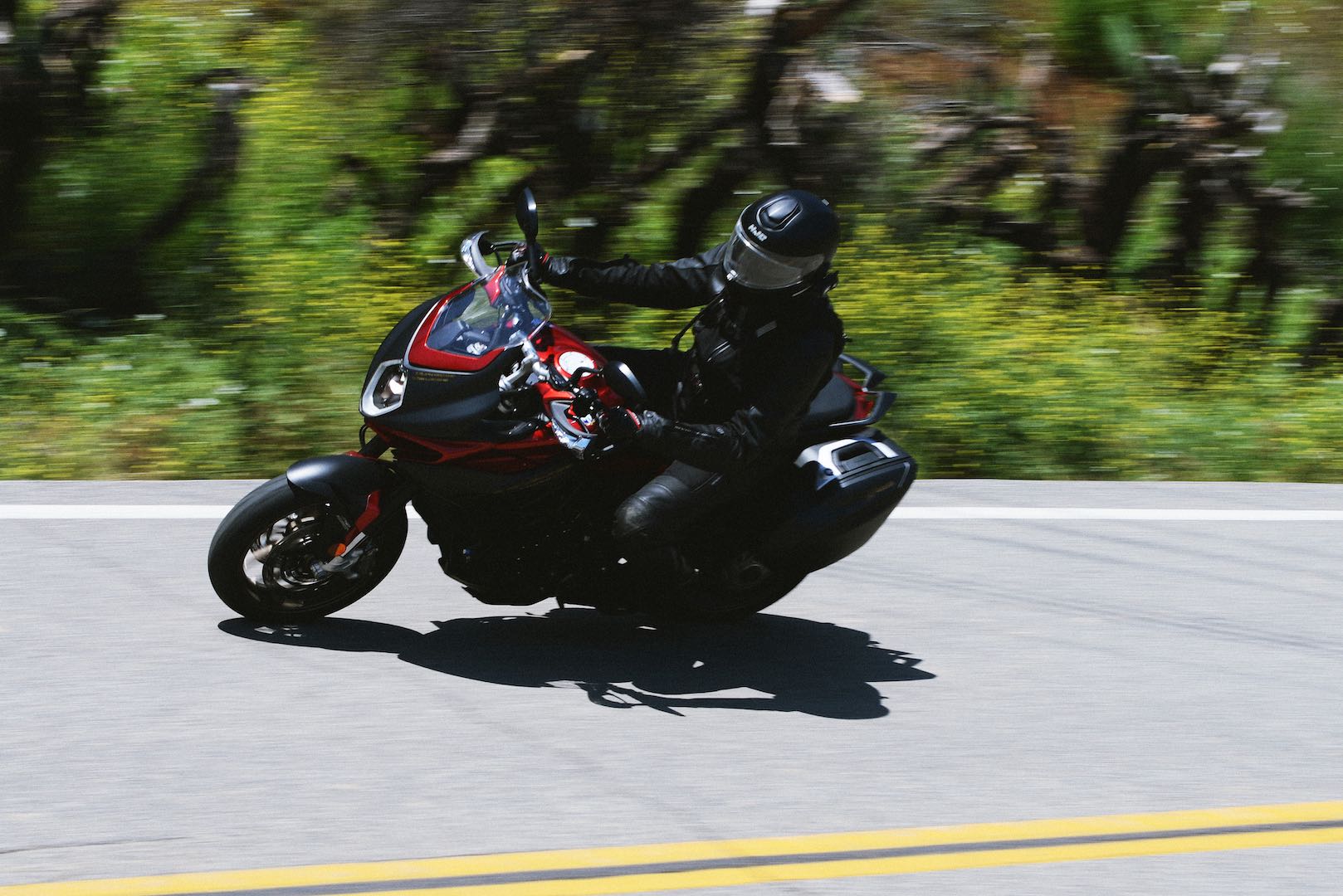 Fast forward a month or so later and Jose arrived at my house with the Turismo. I was very much looking forward to a few days of having this beautiful motorcycle. I called a few of my moto buddies and told them I had this cool bike to review, as it were, and wanted some company on my ride the next day through the ample roads that Angeles National Forest has to offer.

The next day the small crew assembled, and we set out for a day of riding through some of the state’s most beautiful and challenging roads. In all, it would end up being close to a 300-mile day, 200-plus of which were of the twisty/technical/fun variety.

I’ll start by saying the 2019 MV Agusta Turismo Veloce Lusso SCS is a fantastic motorcycle. This is a machine the manufacturer got right. If ever there was a motorcycle where the whole was greater than the sum of its parts, this is it.

Rather than take a deep dive into the technical specifications, I’m going to focus on my experience riding the Turismo, supported by some specs and features (we have a full spec sheet below). Here are my impressions, broken down into the important categories (for me at least):

Genre: MV Agusta positions the Turismo as a sport touring motorcycle, and I won’t argue. However, as a guy who spends a lot of time at the track coaching and riding, and whose motorcycles are of the upright/naked variety for both street and track, I’ll say the Turismo rides more sport than touring. That in no way is meant to imply one can’t pack the side cases to the gills and go on an adventure, but the MV Agusta Turismo Veloce Lusso SCS shines brightest in the handling/performance department. That’s a good thing if you ask me!

Confidence: One of my riding buddies, who happens to be the owner of this magazine, was on the ride that day. When I told him I might be lagging in the pace department, as I’ve never ridden the Turismo, he said something to the effect of “Dave, give it a few corners. I have a feeling you and that bike will get along quite well.” He was so right. Within a few minutes, I felt like I had owned the bike for years. I’m not exaggerating when I say that after a full day of riding, this was and is one of the best handling motorcycles I’ve ever ridden, in any genre, and I’ve ridden a bunch of bikes in a bunch of categories. 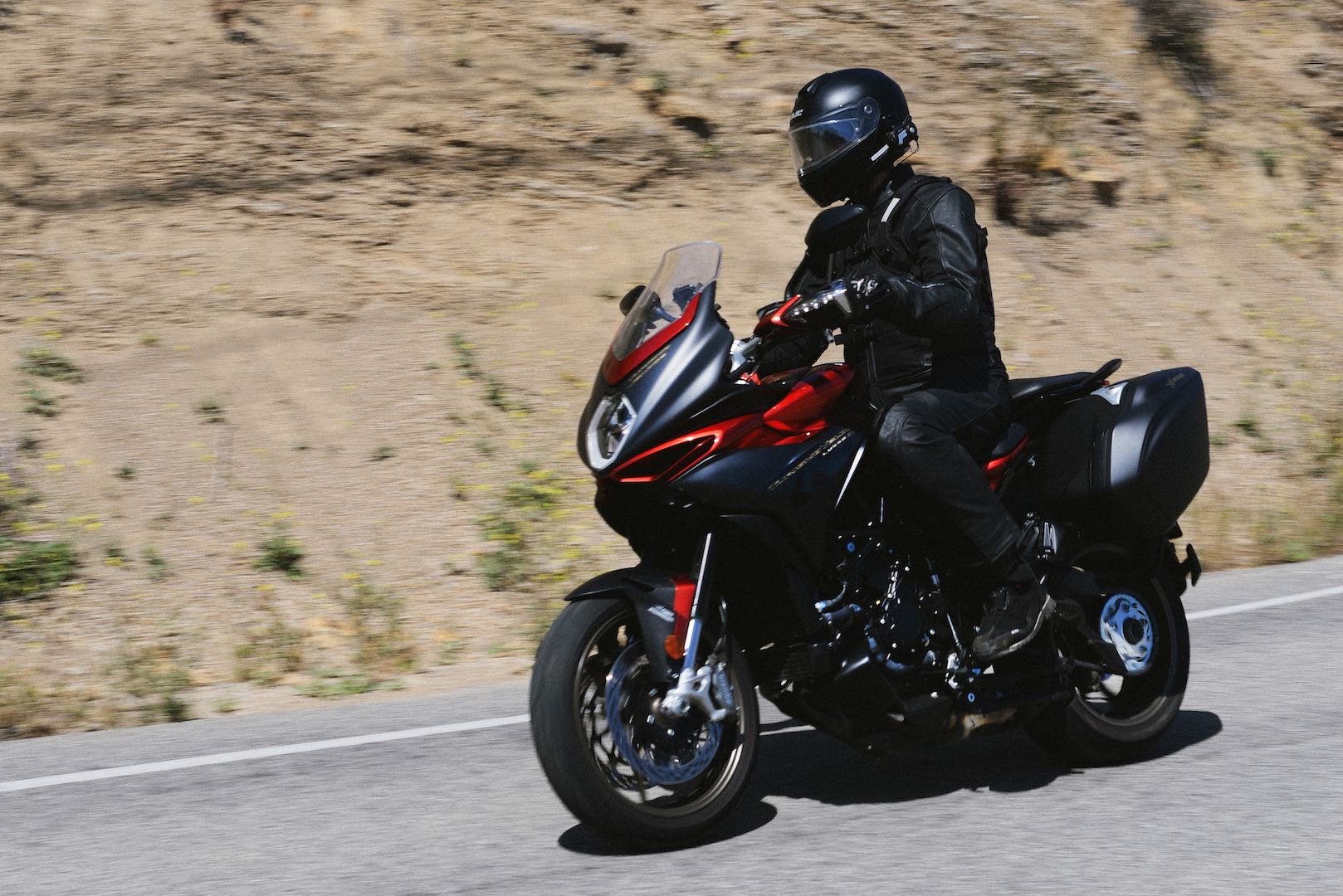 Performance: Between the comfortable but sporty ergonomics, amazing electronics package, natural balance, screaming but usable 110 horsepower engine, composure when leaned over, Brembo brakes, and sportbike DNA, this is a motorcycle that can handle whatever you throw at it. The manufacturer can call it whatever it wants, but it feels like a jack of all trades to me. Touring? Check. A day in the Canyons? Check. Commuting? Sure. Track days? Oh, yeah! I’ve heard it called a race-touring motorcycle—no argument there.

Ergonomics/Comfort: Although I’m on the taller side, I’d say the MV Agusta Turismo Veloce Lusso SCS is more than roomy enough for all-day riding and multi-day trips. Once again, the comfort only makes the performance delivery that much more enjoyable. I love bikes that handle like this and are all-day comfortable. If I were going to nitpick, I’d say the seat is a bit firm, but putting an after-market seat on this bike would be like giving the prettiest girl in class a terrible perm. Leave it alone and deal with it!

Electronics: Like any 21st century top-shelf motorcycle, the Turismo Veloce Lusso SCS is no exception in terms of the suite of electronics on hand to help you ride safer (and faster). From ABS and traction control, to cornering ABS, multiple engine mapping modes, semi-automatic suspension, digital display, heated grips, cruise control, and quickshifting, when it all works well it all works together, and MV Agusta has found a way to make it all come together in a very special way. I have friends who are a bit more old-school on rider aids, but my philosophy is simple—give me the latest and greatest. Why use an iPhone 5 when you can have the iPhone X? I feel lucky to ride in an era where the bike helps me ride better/faster/safer. 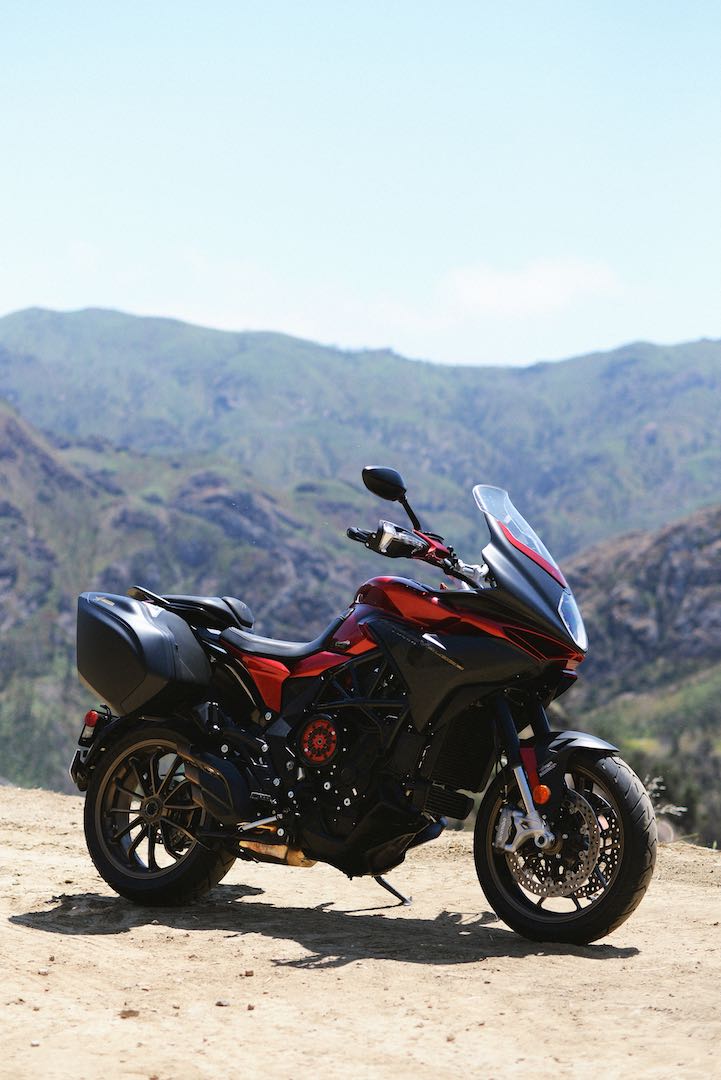 Smart Clutch System (SCS): The SCS not only acts as a clutchless up- and down-shifter, but also allows for clutchless stop/start as well. This was something I was apprehensive about until I had to lane-split all the way home from a ride, I found myself in a decreasing radius switchback corner, or had to travel through a section with multiple stop signs and traffic lights. All of these elements were accomplished with no use of the clutch. As it turns out, the SCS system is a very useful tool—super impressive and seamless in the way it interacts with the rider.

Appearance: Motorcyclists debate what makes for a good-looking machine about as vehemently as people argue over politics these days. In the end, it’s personal. That being said, I’d be hard pressed to find someone who observed this bike in person and did not think it was a work of art. From the open casing of the clutch, to the frame, color, and overall attitude the Turismo Veloce Lusso SCS is a stunner. While it is not the most important attribute to me when buying a bike, how it looks matters. If it did not handle well but looked great, I’d pass. Conversely, if it looked just okay but handled the beans, I’d buy it. To have it look like it does, and perform in a way that lives up to its appearance, well, it’s pretty darn compelling. But can I afford it? Well. 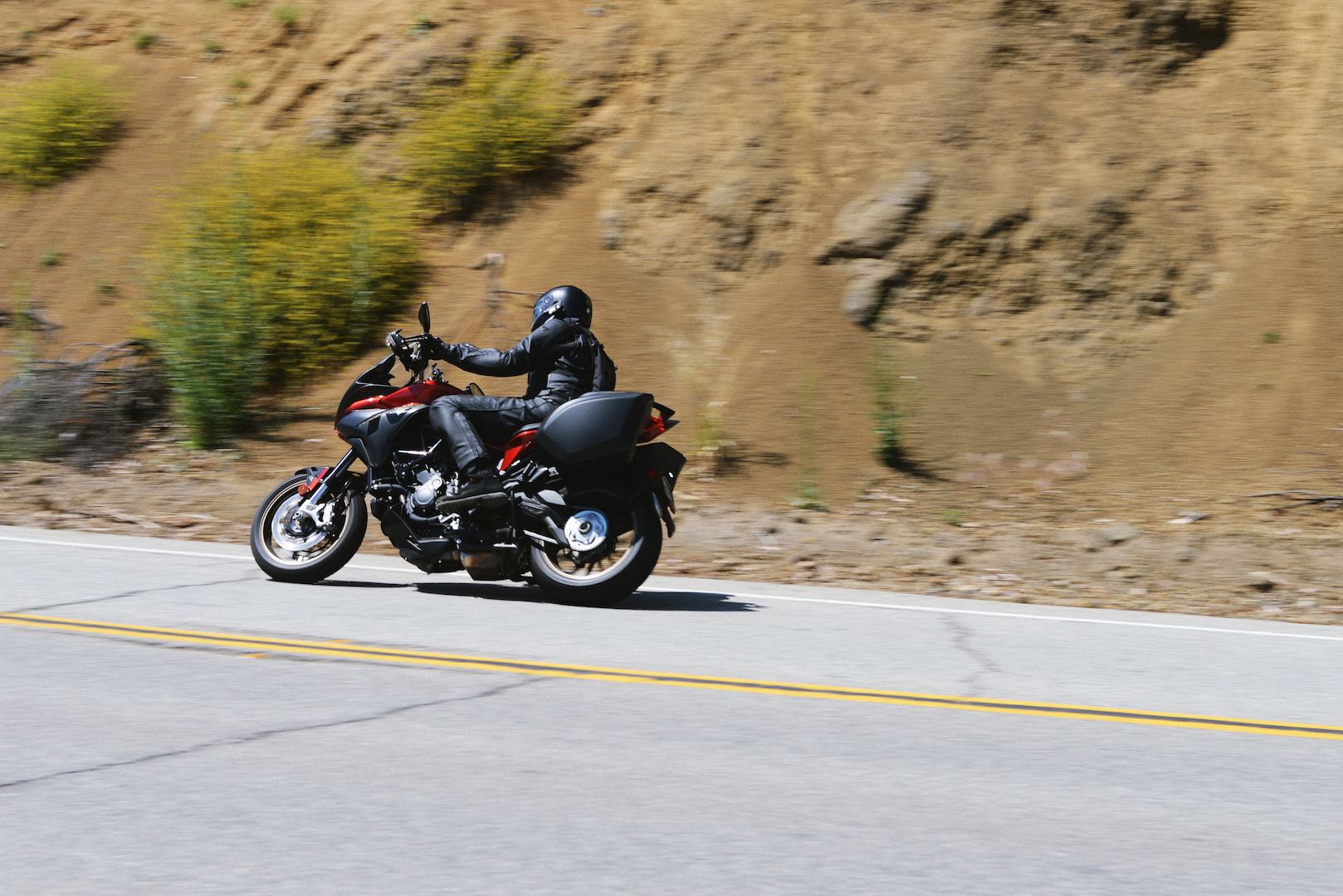 Value: I don’t think anyone who buys the 2019 MV Agusta Turismo Veloce Lusso SCS is thinking about value first and foremost. I think you buy this bike for the sportbike DNA, how it makes you feel when you ride it, the Italian/exotica membership it grants you access to, and at least for me, how fortunate I felt to be in the saddle. You buy this bike for the overall experience and the outright performance in comfort/style, and not because it has the best digital display—it doesn’t. Not because it has the best seat—it doesn’t. What it does have, in spades, is the visceral feeling you get when you ride it—the giggle factor, and the performance of a motorcycle that was made and designed by people in the know, and who granted you access to their wonderful vision. It just made me feel special riding it.

The Verdict: I was surprised just how much I loved this motorcycle. I expected an “Italian” experience, but I got so much more. It looks fantastic – I felt fortunate to be a part of something special by just riding it. The MV performs like a thoroughbred, and ut had made me smile the entire day. I’ll be sad to see it go. Who knows? Maybe I’ll find one in my garage again, this time for longer than a day(s).