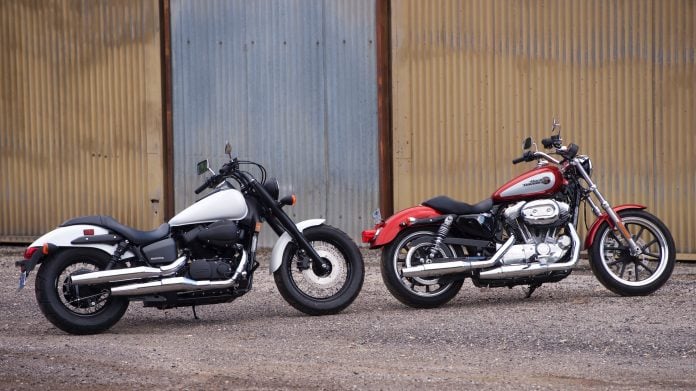 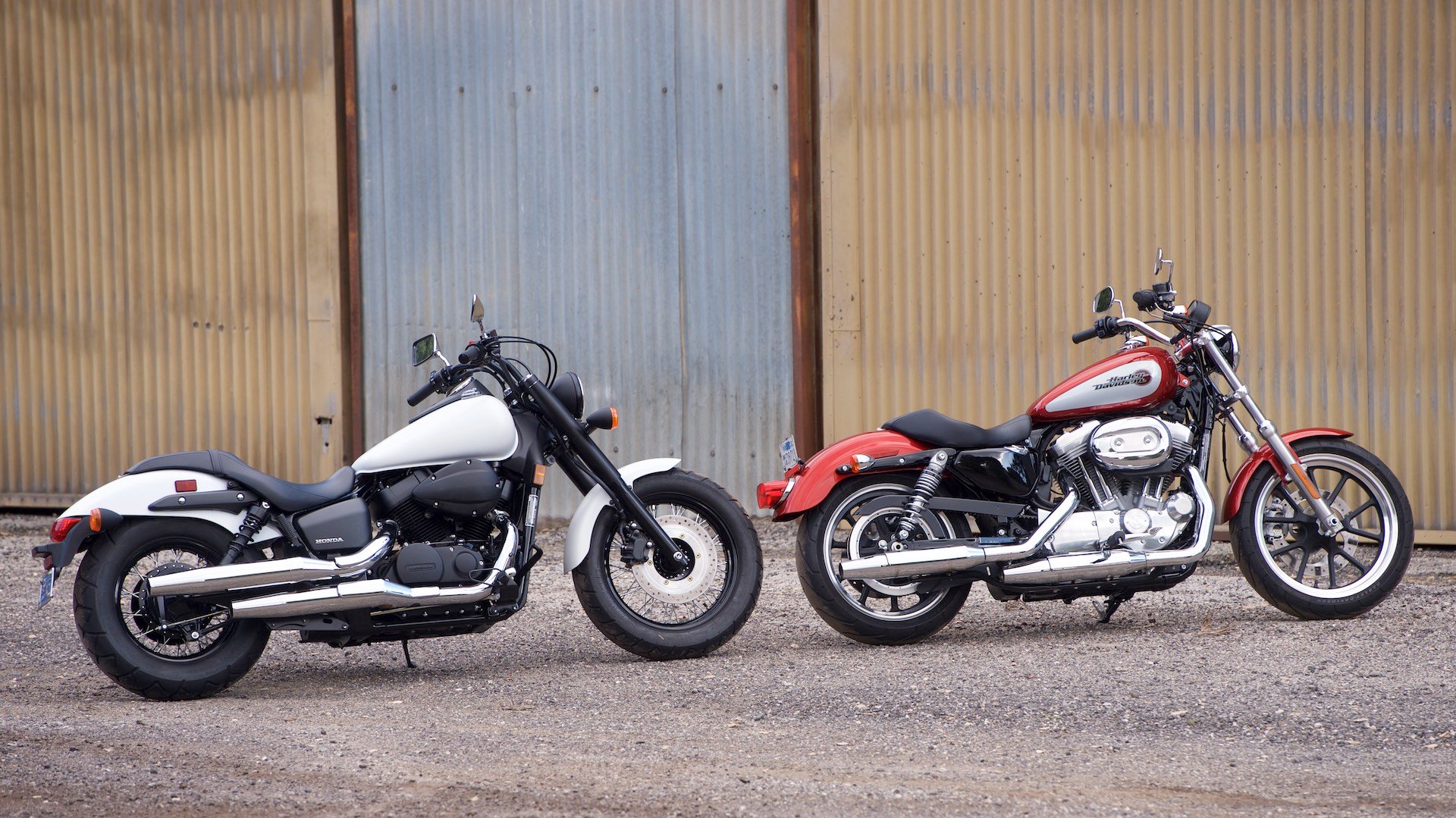 Although both are V-twins, the Harley-Davidson Evolution 883 and Honda Shadow motors are quite different. Harley-Davidson delivers a traditional powerplant with air-cooling, pushrod-actuated two-valve heads, an undersquare configuration, and a 45-degree V-twin spread.Honda goes with liquid-cooling, SOHCs working on three valves, a slightly oversquare setup, and the V is set at 52 degrees. In common are fuel injection and five-speed transmissions. Power is delivered to the rear wheel via a belt on the Sportster Superlow, compared to a shaft on the Shadow Phantom.The chassis are also very distinctive from one another. The Harley-Davidson Sportster Superlow is compact with mid-mounted foot controls and an upright seating position. Long and relaxed best describes the raked-out Honda Shadow Phantom with its laid-back seating and forward foot controls. Despite its Superlow moniker, the Harley-Davidson’s unladen 27.8-inch seat height is two inches higher than the ground-hugging Honda. 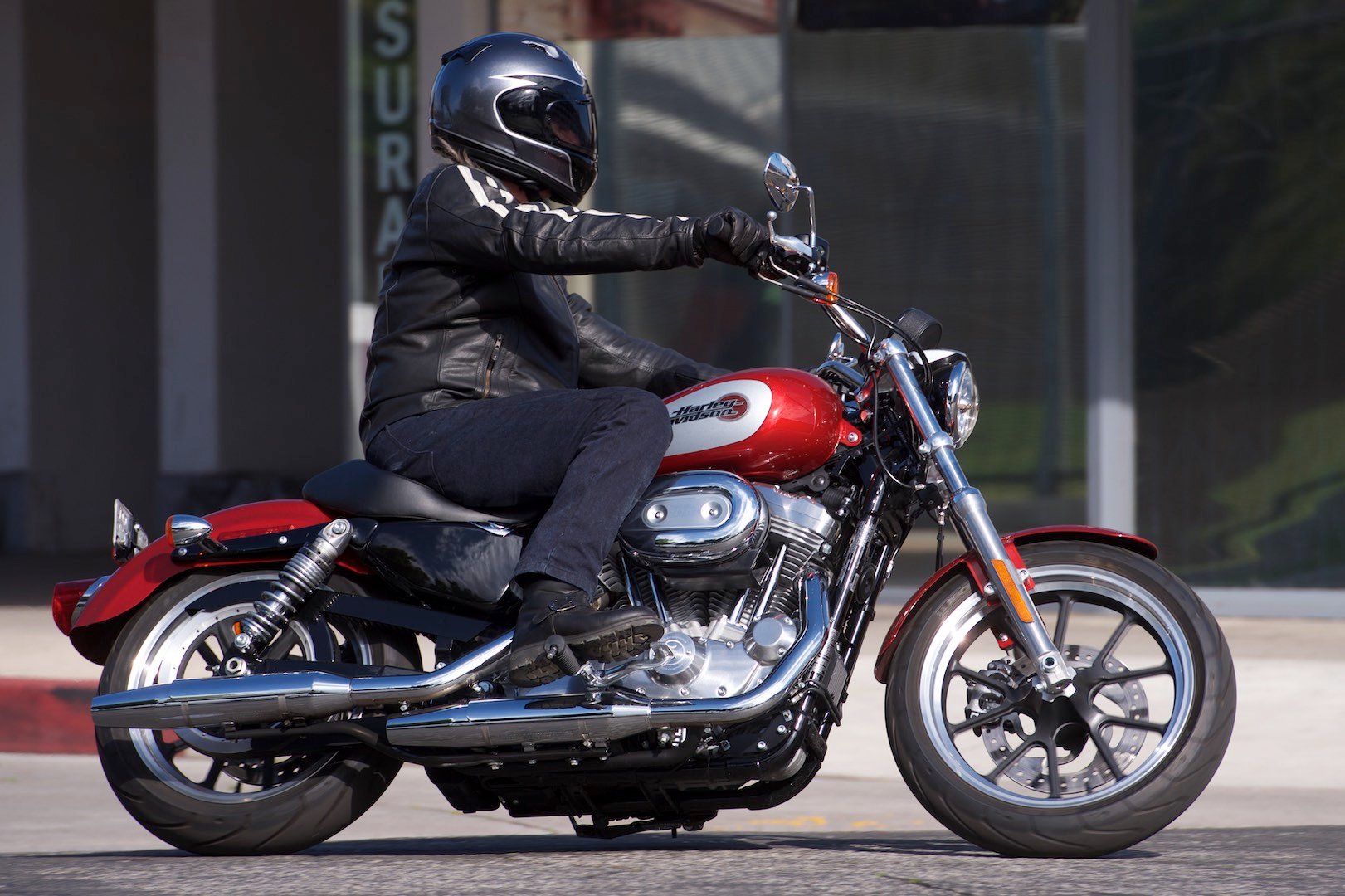 Another big difference is in the range of options. The 2019 Honda Shadow Phantom is available in very plain Black and Matte Pearl White. There is no badging on the tank or fenders, keeping the branding very much under the radar. The base 2019 Harley-Davidson Sportster Superlow is $800 more than the Phantom, and the price can go much higher. ABS ($795) and a security system ($395) are optional, and they were installed on our test motorcycle.Also, the Superlow has Vivid Black as the paint on the standard model, and it looks good. Harley-Davidson offers two levels of paint upgrades, including the Wicked Red/ Barracuda Silver ($550) on the motorcycle we tested.That pumped the Superlow up to $10,439, compared to the Shadow’s $7899 MSRP. We consider the H-D options to be positive, as you have more choices. You can’t have a Phantom from the factory with ABS, a security system, or a fancy paint job. However, you can get a basic Superlow for $8699.As hinted earlier, you have a clear choice when it comes to ergonomics. You’re sitting upright, in an almost sporting position on the Superlow. The mid-mount foot controls make the Superlow much better suited to shorter riders than the Shadow. Conversely, taller riders will appreciate the forward foot controls on the Shadow, as they’re much easier on the legs if your inseam is 30-inches or longer. 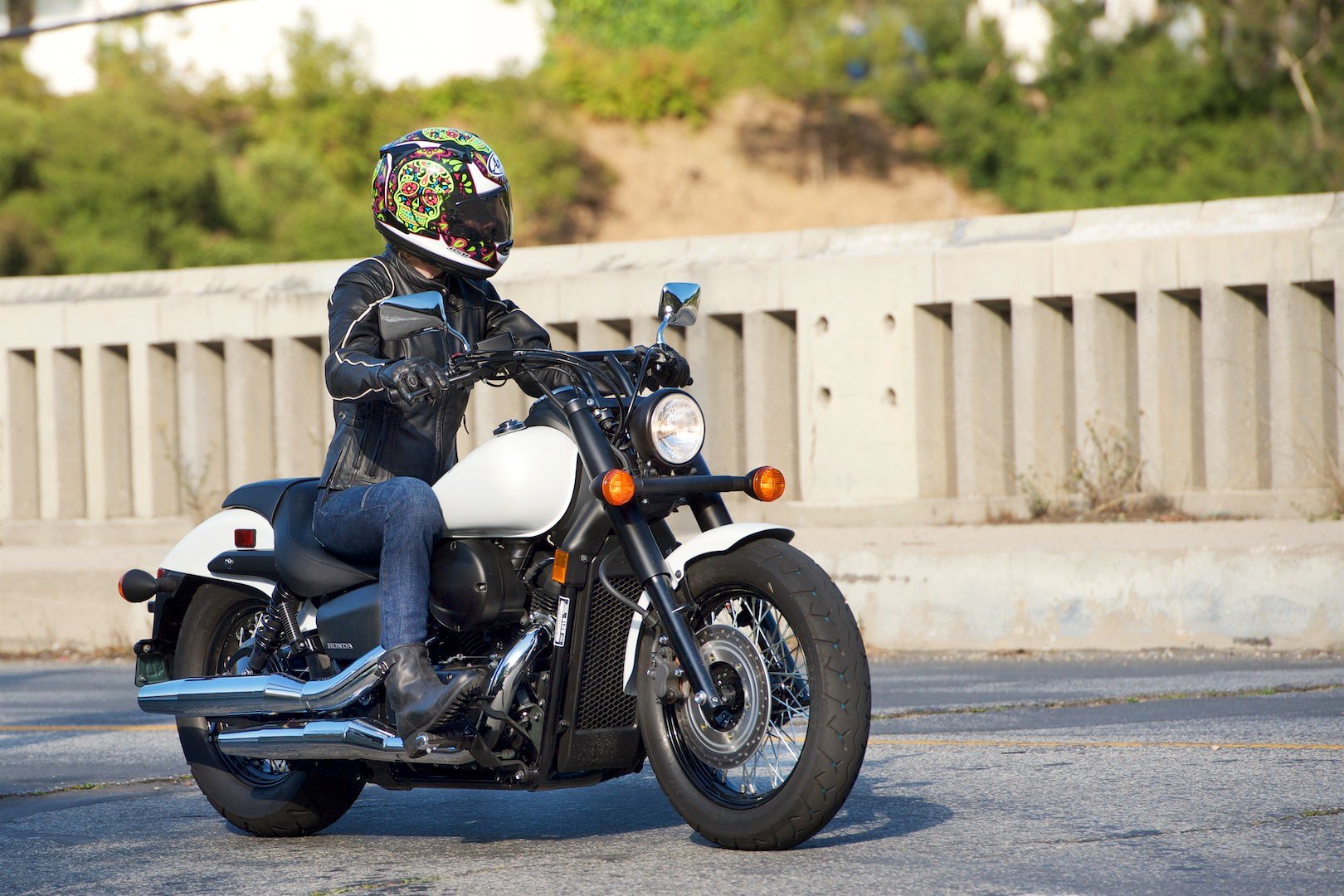 Both motorcycles have raised handlebars, with the Shadow’s handlebar sweeping back a bit more. The Superlow’s handlebar can be adjusted, while the Shadow handlebar is in a fixed position. If you need to carry a passenger, this comparison is over—only the Shadow has seating for two.Around-town riding is what the 2019 Harley-Davidson Sportster Superlow and Honda Shadow Phantom are all about. Both motorcycles are nicely nimble and not overpowered for stop-and-go urban traffic. Certainly, the Superlow is the more agile of the two. The Superlow’s 59.1-inch wheelbase is more than five inches shorter than the Phantom, and the Honda’s 34 degrees of rake is almost three degrees more relaxed than the Harley-Davidson.The Superlow weighs just 20 pounds more than the Phantom at the curb, and part of that is due to a larger-capacity fuel tank. That means the Superlow is easier to throw around than the Phantom. The inverse of that is that the Phantom has a more planted feel, which has its own appeal. 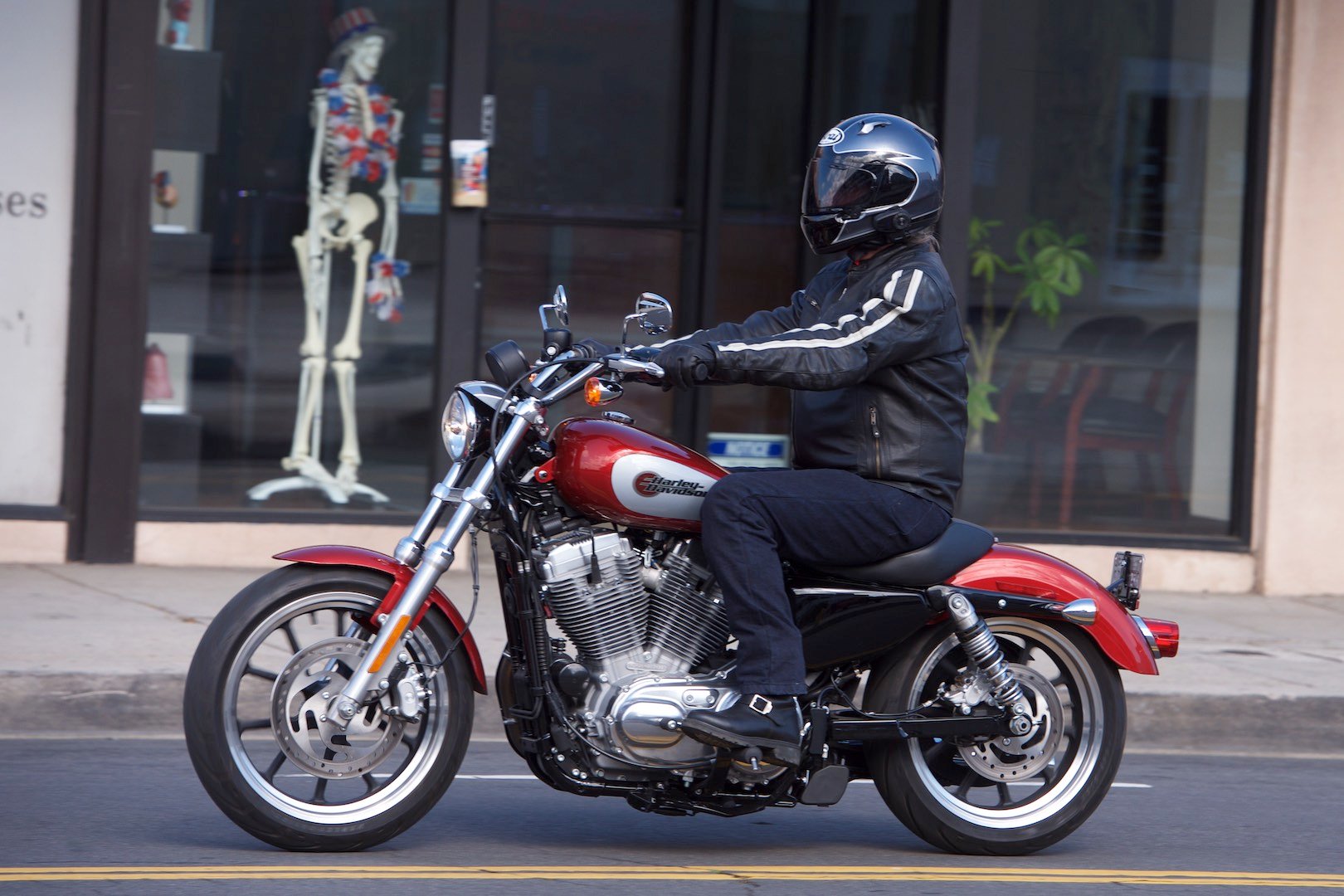 Cornering clearance usually isn’t an issue in an urban environment, but in the case of the Superlow, its peg feelers will hit the pavement with startling regularity when making both left- and right-hand turns at standard intersections. The positioning of the Phantom’s footpegs means your bootheel will be the first thing other than the tires to contact the pavement, though scraping on the Phantom happens much less frequently than on the Superlow.The Phantom edges out the Superlow in suspension, even though the Sportster line got a considerable boost in shock performance when it went to emulsion units a few years ago. Although neither motorcycles are smooth riders, the Honda suspension units do a better job of dulling impacts. Part of the Honda advantage is that it has a half-inch more fork travel and 66 percent more rear wheel travel. Further, the Honda suspension is aided by higher profile tires, so there’s an extra rubber cushion at work.For long rides in urban areas, we preferred the shape and softer padding of the Honda Shadow Phantom seat. However, the solo perch on the Harley-Davidson Sportster Superlow wasn’t bad at all, and it looks great. Considering both motorcycles are working to have low seat heights and would skimp on padding, the seat comfort quality was high.You will want to take a break before you empty the generous gas tanks. Both motorcycles boast an impressive 200+ mile range, going by the tank capacities and estimated fuel economy. As always, how aggressively you ride will have an impact on how fast the gas is guzzled. 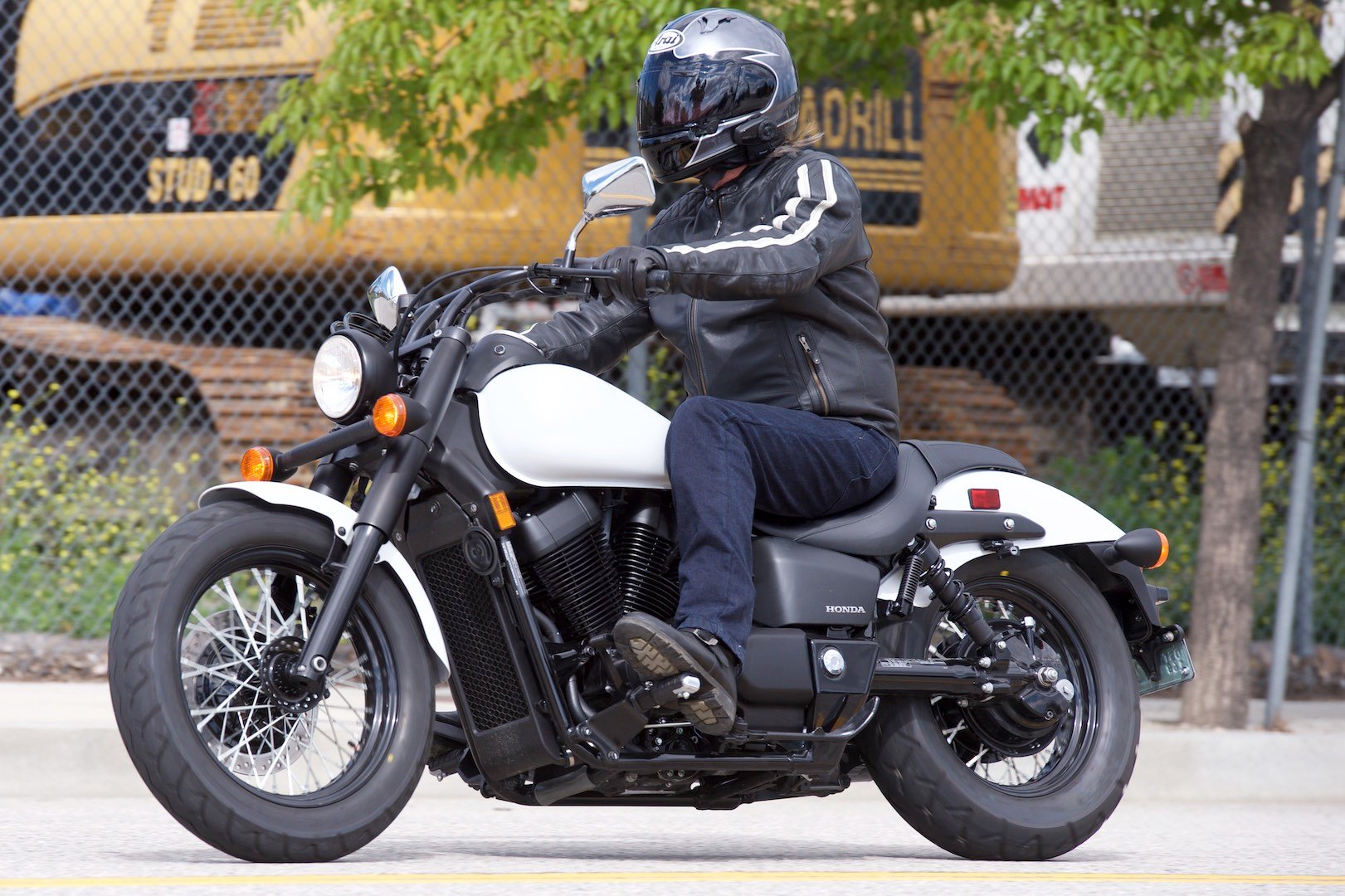 Speaking of which, the Harley-Davidson Sportster Superlow has a definite acceleration advantage over the Honda Shadow Phantom. While the Harley-Davidson Evo 883 motor has an 18.5 percent displacement advantage, the Shadow powerplant is liquid-cooled, has an overhead cam for each cylinder, and a third valve. Regardless, the Sportster had demonstrably more performance from a stop and when doing roll-ons. Happily, both motors are friendly and easy for riders with limited experience to master.The Superlow and Phantom both have five-speed transmissions that have spot-on cogs. With the wide powerbands, you never feel between gears. Unsurprisingly, the Honda Phantom shifts more slicky, while the Harley-Davidson Superlow prefers deliberate shifting; sloppy shifting will grind the Superlow’s gears.Although quite different, both motorcycles work great in an urban environment, mostly due to their relatively light weight, low center of gravity, and friendly powerplants. It is simply a matter of preference—you get to decide if the low and steady Phantom is better suited to your style than the nimble and taller Superlow.One great thing about testing city-friendly motorcycles in Los Angeles is that we have some enjoyable urban twisties, with the famed Mulholland Drive in the Santa Monica Mountains between Hollywood and Encino ruling the roost. It’s an amazingly fun and varied road when you ride at a low-traffic time, and the views are astounding on clear days. When taking to the twisties, the different personalities emerge again. 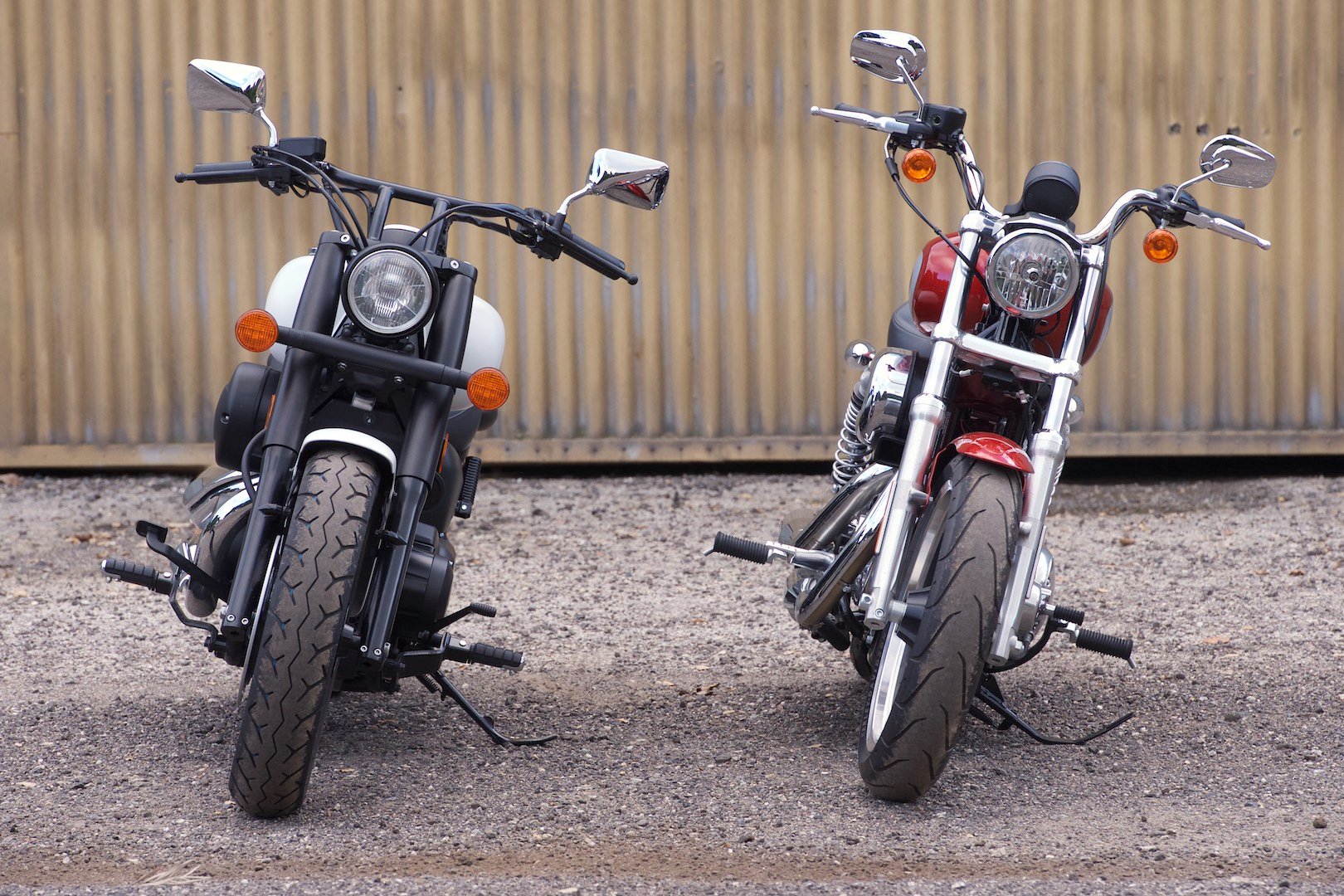 The Harley-Davidson Sportster Superlow feels much more like a sport motorcycle, as it loves to be thrown around in corners. You would never know how much it weighs, as it is happy to change direction at will. The Michelin Scorcher 11 tires are easily up to the job, given the lack of cornering clearance.If you’re the least bit aggressive, you will be grinding down the Superlow’s peg feelers regularly and predictably. On the more rugged portions of Mulholland Drive, the short-travel suspension reminds you to take it easy, though you can hit a nice pace on newly paved stretches.Although it has a long wheelbase and an extremely relaxed rake, in addition to decidedly non-sporting ergonomics, the Honda Shadow Phantom does better in the corners than you might expect. As it’s low to the ground, it doesn’t demand much to initiate a turn, and the 15-/17-inch wheel combo helps turn-in. 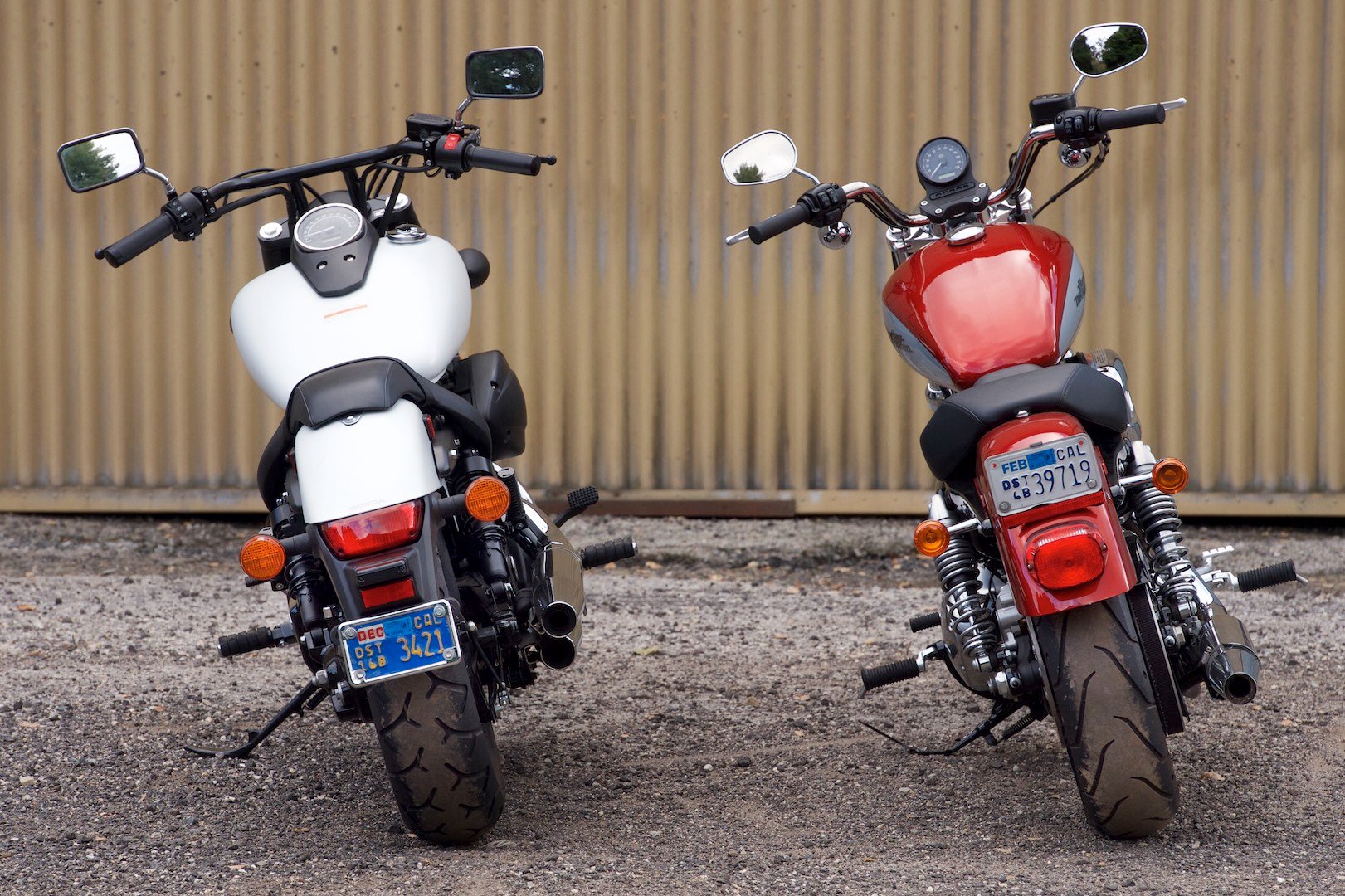 Once in, the Honda is reassuringly stable, even in bumpy corners. While it doesn’t run out of cornering clearance as quickly as the Superlow, a Phantom owner will need to keep an eye on the heels of his boots—they will be ground down pretty quickly, as they are the first touch-down point when heeled over. The chunky Bridgestone Exedra tires work well on the Phantom’s small diameter wheels.The motors in both motorcycles serve each chassis well. In a head-to-head comparison, the Evolution 883 motor’s grunt out of corners gives it an advantage. More aggressive riders can tap into that additional power while still enjoying the agile chassis. A less-confident rider might do better on the Phantom, thanks to the extra stability and smoother reminders that the motorcycle is out of cornering clearance.Harley-Davidson offers superior braking on the Superlow. Honda still has a drum rear brake on the Phantom, and it is weak. The big 260mm disc on the rear wheel of the Superlow does much better. Up front, the single-disc on each motorcycle does fine, with a natural feel and soft initial engagement. While you’re looking at the wheels, you will note that the Honda scores style points with traditional wire-spoke wheels.When it comes to style and charisma, bystanders have spoken. The 2019 Harley-Davidson Superlow repeatedly attracted admiring comments. Not a single person remarked positively or negatively about the latest iteration of the Honda Shadow Phantom. The Phantom’s Matte Pearl White paint doesn’t arouse much interest—it lacks any graphic treatment and looks like it’s awaiting a proper paint job. We had the high-end Wicked Red/Barracuda Silver paint on the Superlow, so the difference was particularly striking. 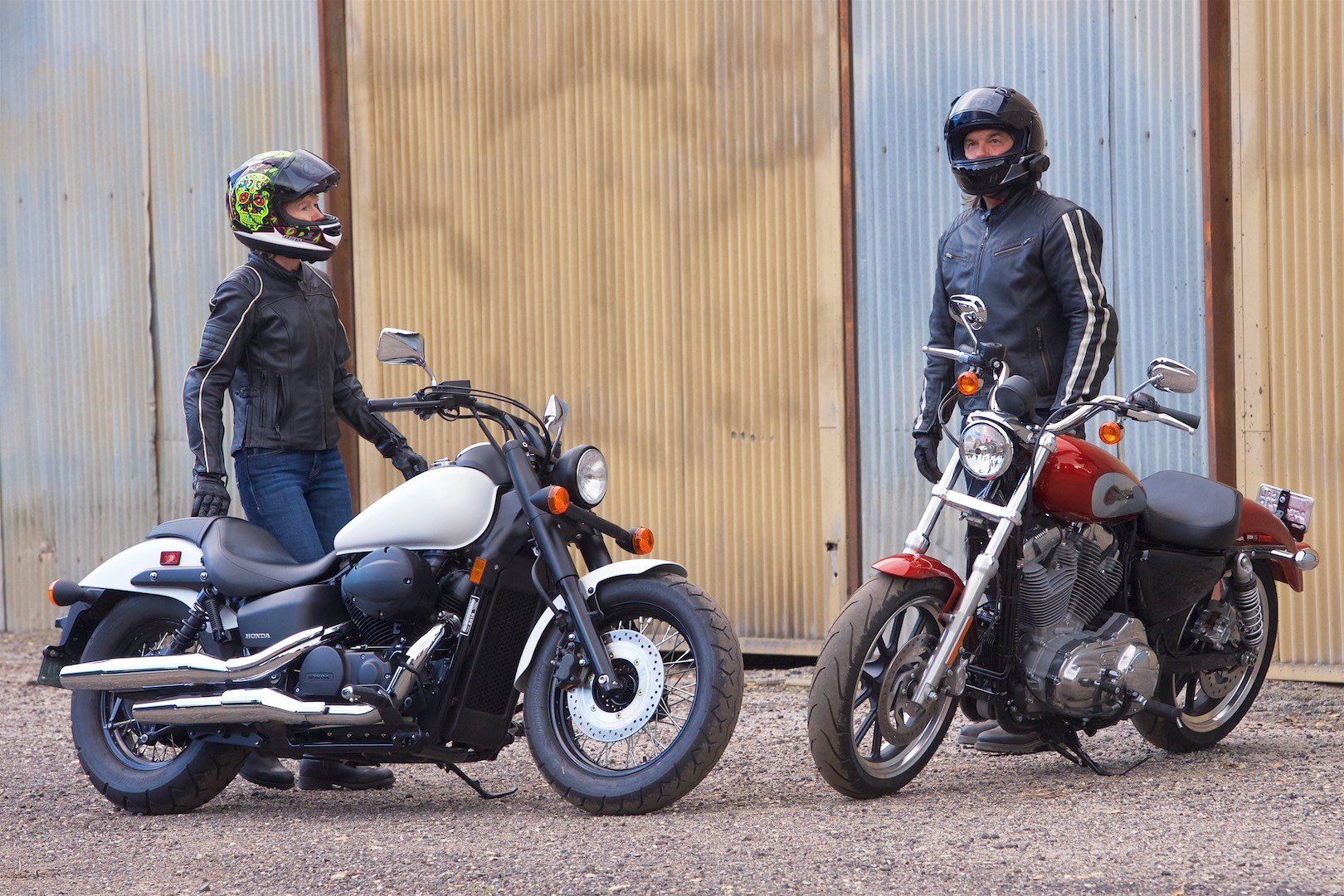 Both motorcycles have a speedometer, and no tachometer—none is needed. The triple-clamp mounted speedo on the Superlow is more in the line of sight than the larger clock mounted on the Phantom’s tank. The hand controls are non-adjustable, with the Harley-Davidson’s levers easier for small hands to use, even if they aren’t as ergonomically pleasing as the long-reach Honda levers.The 2019 Harley-Davidson Sportster Superlow and the 2019 Honda Shadow Phantom give riders looking for a practical urban mount a clear choice. It isn’t necessarily an easy choice, as both motorcycles are fun to ride and effortlessly get their jobs done. This comparison is a perfect example of why we don’t pick a “winner”. The superior motorcycle of the two is dependent upon your taste in style and riding. Even if you can’t decide and have to flip a coin, you’ll pick a winner regardless of whether heads or tails come up.Photography by Kelly Callan and Don WilliamsRiding Style (His)Riding Style (Hers)