Shoei brought the GT-Air to market six years ago, and it has built a well-earned reputation as a competent all-around street helmet, fitting into the broad sport-touring and touring segments. Now, just as those original GT-Airs are reaching or exceeding their expiration dates, the Shoei GT-Air II enters the scene, complete with marked improvements over its predecessor in comfort, aerodynamics, utility, and communications integration. 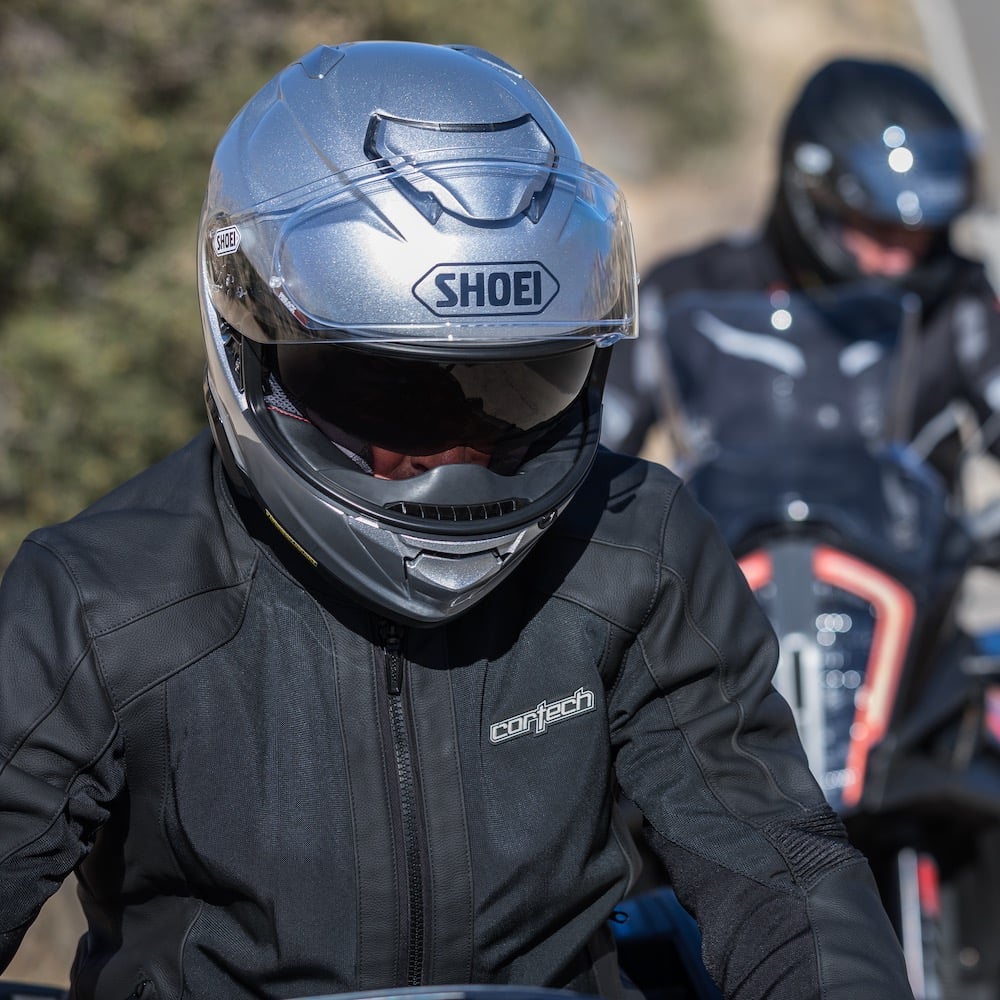 Let’s begin with the exterior and work our way in. Shoei’s patented Multi-Ply Matrix Aim shell returns with several subtle aerodynamic revisions that are crucial to the GT-Air II story. For those of us that don’t speak in proprietary terms, Shoei describes the shell as “fiberglass with lightweight organic and high-performance fibers.” It’s a composite shell that is stiff enough to deal with an impact while allowing flexibility to help dissipate forces.

Shoei has once again relied upon its proprietary Multi-Piece/Multi-Density EPS liner, which has varied densities in the areas where it matters most, giving the rider a range of protection in a variety of situations.

Visually, the GT-Air II isn’t far removed from its forebearer. Although the changes are understated, they are immediately noticeable once you’ve merged with traffic. For instance, the forehead area has been raised slightly to accommodate the new 5mm larger internal sunshield—a fact that would be unbeknownst to most without side-by-side scrutiny.

The big story here is the aerodynamic improvements that aim to quiet the helmet and increase stability. Also, the GT-Air II is tearing a page from the Shoei Neotec II playbook and has integrated buttons for the Sena SRL2 communications system. Say goodbye to the bulky intercom attachments; it’s all streamlined from here on out. 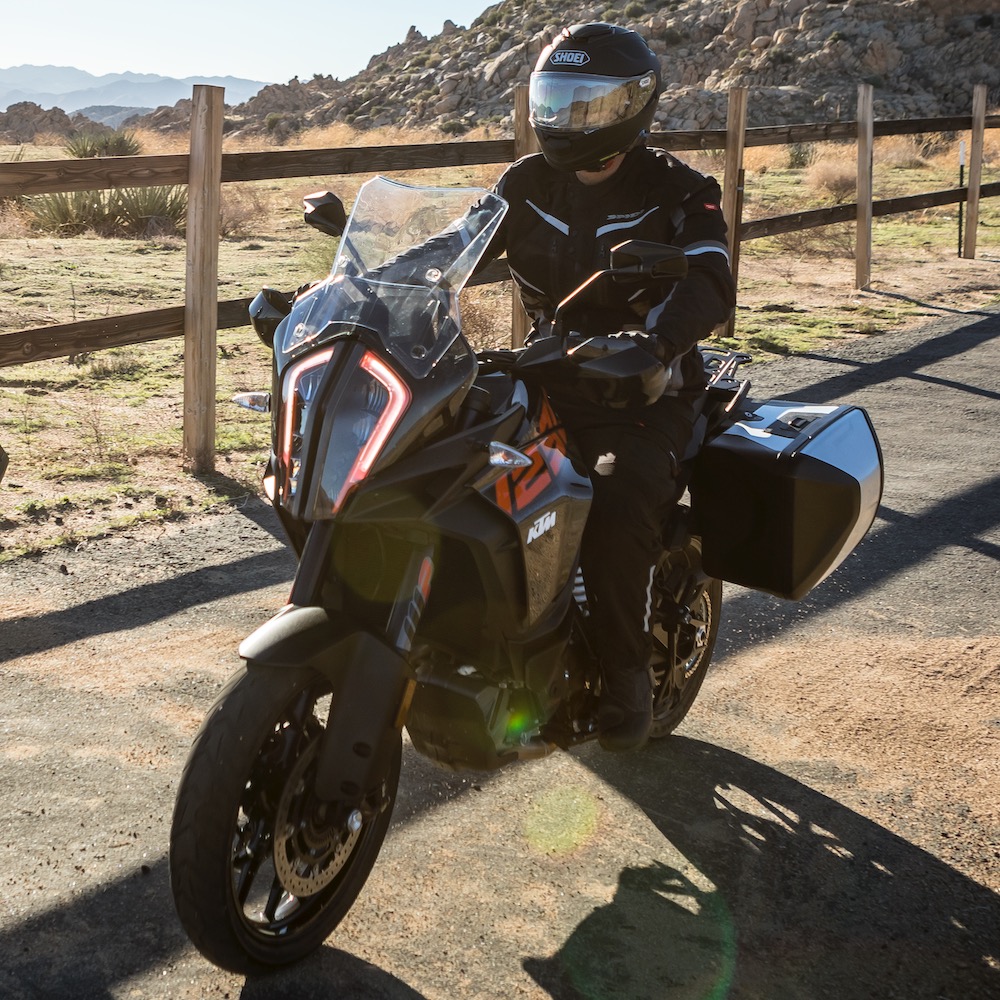 Taking another step into the wild side, the new Shoei GT-Air II retains the more aggressive appearance than the original did. Shoei moves it forward a small step, proving that sport-touring gear doesn’t need to be milquetoast when it comes to styling. The wide variety of graphics choices and shell design attest to that.

Several dashing aero features accent the Shoei GT-Air II’s angular profile. This is most noticeable at the chinbar, which directs fresh air into the vent and around the helmet. Also, a chinbar spoiler redirects air away from the from under the rider’s chin, preventing buffeting and, once again, decreasing wind noise. It is marginally reminiscent of the Shoei X-Fourteen, though nowhere near as prominent.

Taken together, the aerodynamic changes are the starkest contrasts between the GT-Air and GT-Air II—stability is improved, and air buffeting reduced. When getting up to freeway speeds, the GT-Air II is exceedingly steady, even when riding naked machines such as the 2019 KTM 790 Duke.

Despite its displacement size, the middleweight Duke is a huge fan of spinning the mph gauge up as if you’re an enthusiastic contestant on Wheel of Fortune. When in the upright riding position and traveling at pace, I didn’t experience bobbling, headshake, lifting, or ills that one may feel with a lesser lid. Naked sportbikes are a tough hurdle to leap for any helmet, so it’s a good benchmark.

Faired machines intensify the GT-Air II’s positives. Doing head-checks over the shoulder doesn’t result in a jarring pull; it slices through the air and doesn’t attempt to yank you off your steed. 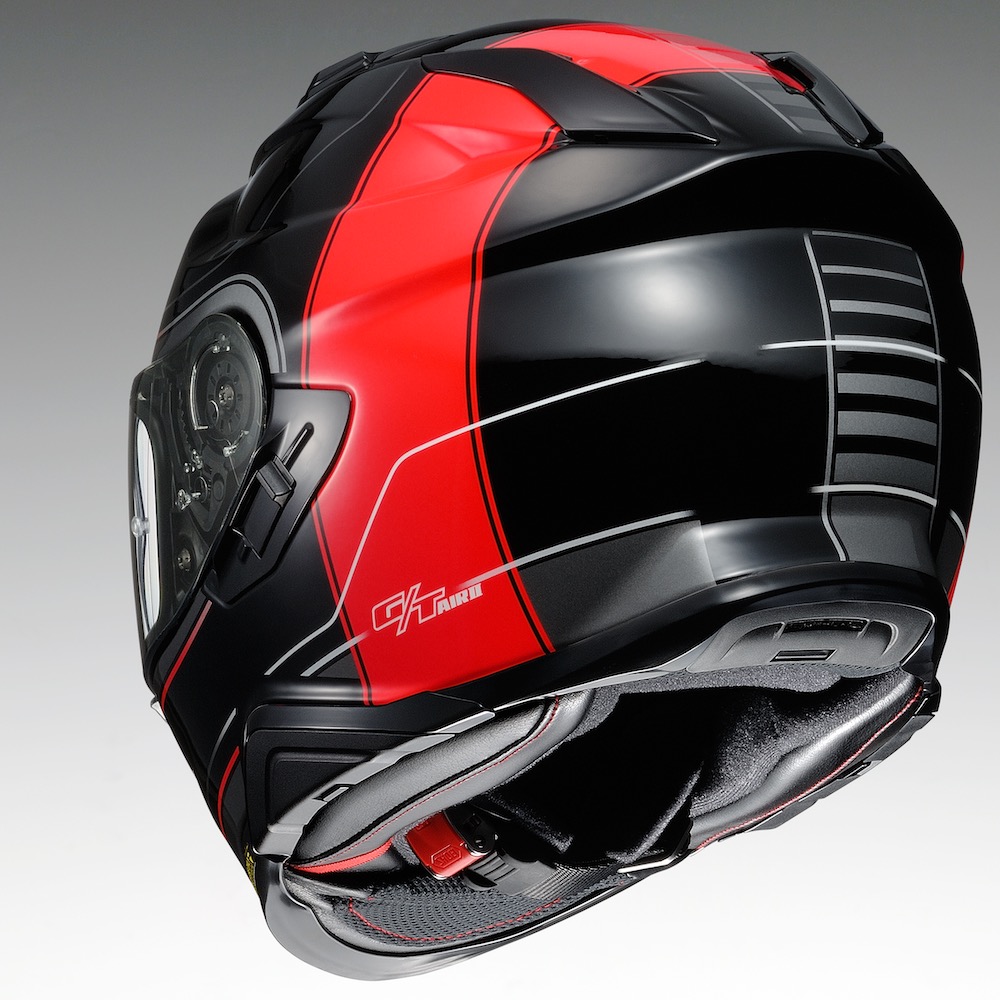 When it comes to improving the creature comfort, a few other aero updates aid the cause along. The updated sunshield slider is smaller, creating less of an opening in the shell and decreasing the ingress of air, which lowers noise.

The sunshield’s 5mm extension doesn’t seem like a lot, but it quickly remedied one of the complaints some riders had about the original GT-Air—it didn’t drop down far enough, which would often create a distracting seam in your vision. The tinted visor doesn’t completely shade your entire view, though it covers enough of it to be more than adequate. Also, there is no conflict with my glasses. In addition to the standard smoke sunshield, a high-def yellow option is available.

Better yet, manipulating the internal shield is quick, smooth and intuitive, without any of the wonky grinding or spring noises that you’ll hear with inferior systems.

One of the larger pieces of the puzzle when it comes to noise reduction is the all-new windscreen baseplate. We still see the tried-and-true CNS-1 faceshield in play, so GT-Air owners will have a spare shield handy for the II, even though the baseplate has been completely revised.

Working in conjunction with more abundant rubber beading around the generous eyeport, the baseplate is spring-loaded and helps compress the faceshield against the much more robust rubber beading. The Shoei GT-Air II does offer up quite a nice view. Your peripheral vision is not compromised in any way, allowing you to spot your corner entry and exits with ease. With the revised design in action, your focus won’t be upset by pesky air leaks either. The spring-loaded baseplate pulls the faceshield against the helmet tightly.

One of the keenest features on the Shoe GT-Air II is one that many riders need and just as many helmets lack—a cracked open position. The faceshield can be locked into a slightly open state, creating positive ventilation and defogging – although, Shoei does need to be aware that there is a decent joke in respect to the name. 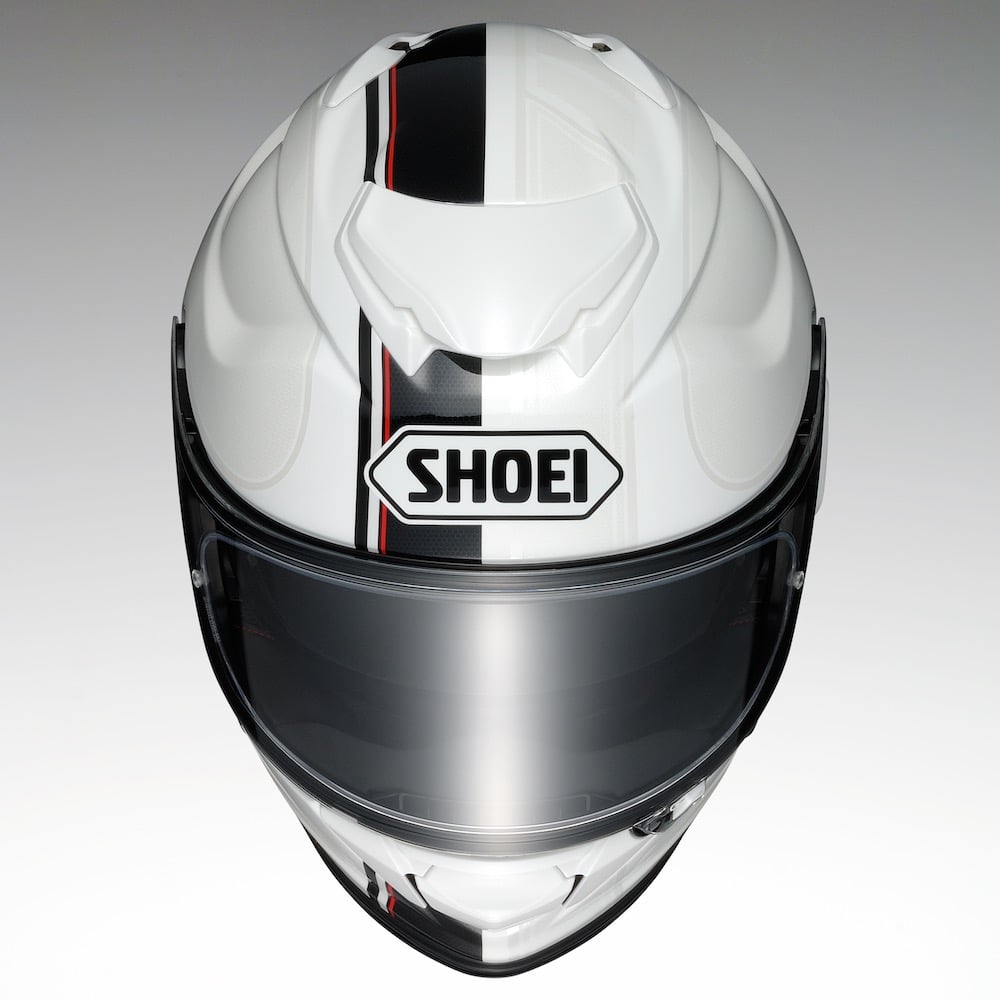 When you’re traveling at low speeds through traffic on chilly mornings, evenings, or in the rain, that narrow gap is a godsend. Notably, the GT-Air II’s windscreen comes with posts and a Pinlock Evo insert. If you wear glasses as I do, this slightly open option makes life much more comfortable, defogging spectacles in a hurry.

Snapping the windscreen shut, you’ll feel a confident click, though it does require a bit more effort than other Shoeis in the stable.

Ventilation has been revised with the new Shoei GT-Air II, and you can continue to experience plenty of cooling air on those warmer days. In total, there are three adjustable intake vents on the front, and five always-open exhaust vents in the rear, although only two intakes and two exhaust ports are visible. Happily, a gloved hand can manipulate all the switches. While the GT-Air had adjustable exhaust vents, they have gone by the wayside; the GT-Air II’s exhaust vents are always open. 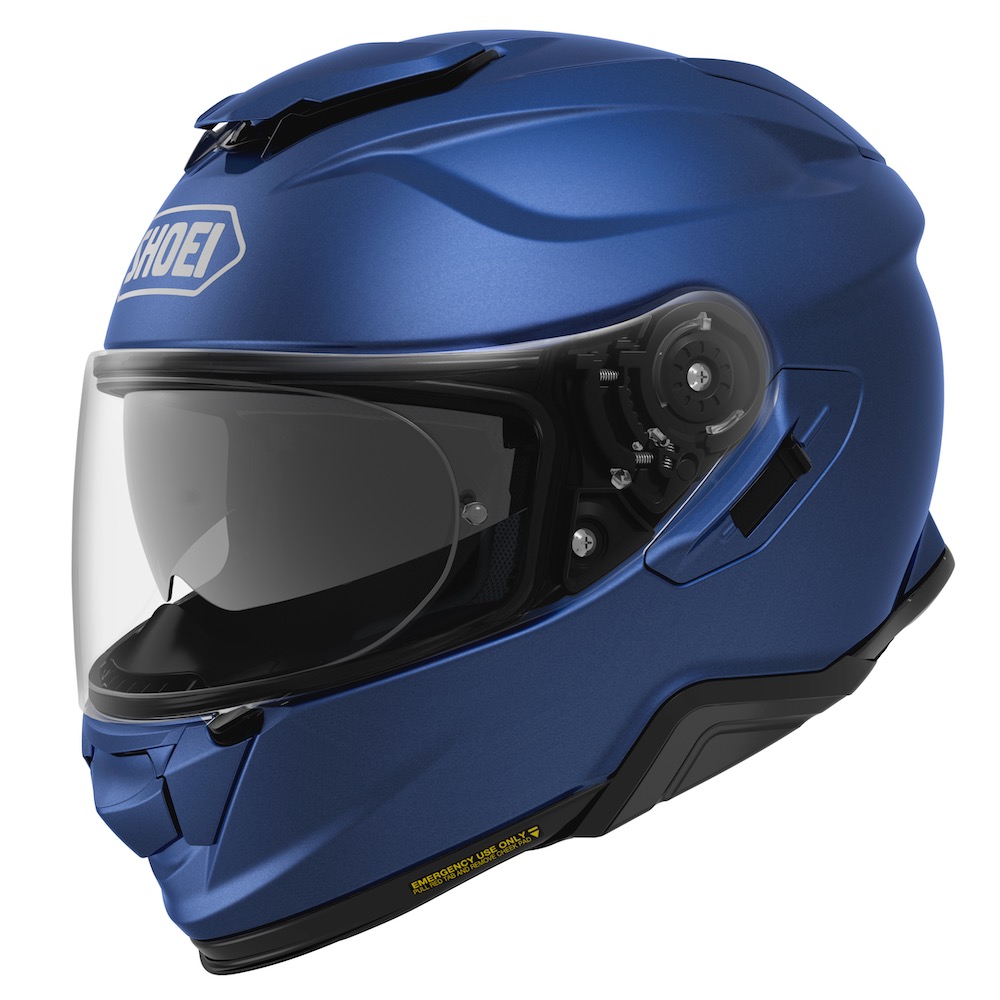 The chinbar vent directs a considerable amount of air across the faceshield and countenance of the occupant. On the top of the helmet is a sizeable three-position vent with two air-intakes, which directs air across the scalp. In Southern California’s balmy weather, it is something that you will rapidly feel when you click the half- and full-open positions.

The Sena SRL2 system is designed to be paired with the GT-Air II, and is a $299 extra. An essential addition for the GT-Air II is cutouts in the EPS liner for the Sena SRL2 communication system—which is exclusive to the GT-Air II and Neotec II. Ear pockets have been integrated to house the Sena speakers, which results in a seamless fit. You won’t have protruding speakers putting the squeeze on your ears during long rides.

Even better, the EPS liner features channels for all wiring and a cutout for a pin-microphone in the chinbar. Of course, adding the SRL2 will add a bit of weight, but at no point will you feel the pangs of an ill-fitting communication device. All the wiring is cut to the perfect length, leaving you with a clean fitment.

The SRL2 is an improvement over the SRL1 in that the SLR2 can utilize both a pin-microphone and the traditional boom microphone commonly found with Sena products; the SRL1 can only use the boom mic.

Those familiar with the longtime fan favorite, the Sena 20S, will be comfortable with the functionality of the SRL2 system. However, the SRL2 relies on a Bluetooth connection, as opposed to the more precise and capable mesh technology found on the Sena 30k system. Still, you can pair the SRL2 with your phone and motorcycle dashboard, link to as many as seven other intercoms, and do everything you need to do with ease. The call clarity is on point and, due to the reduced noise, people that I’m speaking with have no idea that I’m in the saddle. 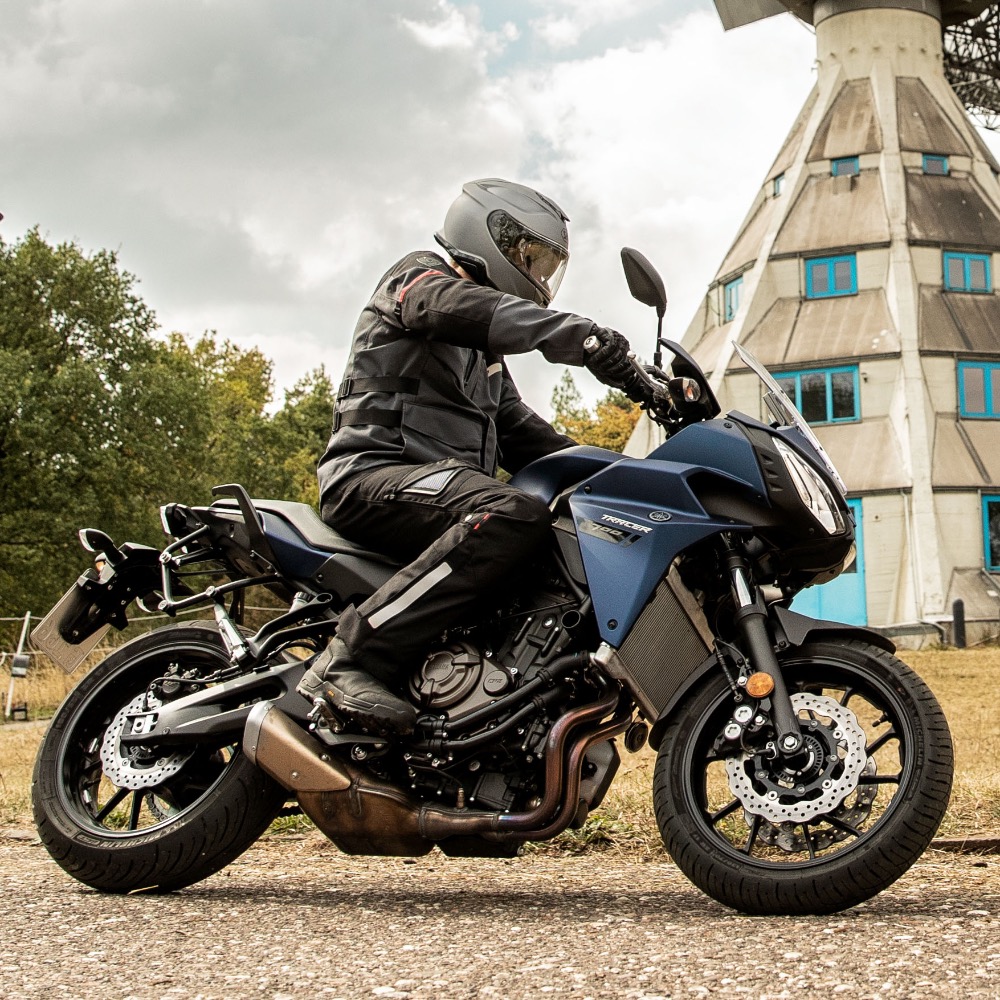 On the downside, the SRL2 system doesn’t put out enough dB to satisfy for earplug users. Without hearing protection, the volume is perfectly fine. A bit more amplification would be appreciated for those using hearing protection.

Also returning is the plush liner, which is one of my personal favorites in the helmet business. The only change from the interior is red stitching that’s classing up the joint. The snaps are easy to use and not fiddly, making cleaning a relatively painless affair.

A small change that Shoei did inform us of is that the helmet opening being widened slightly, as they found that the tight initial pull-on of the helmet was a “race fit” and gave prospective buyers the wrong impression.

Still, pulling the GT-Air II does have a slightly more race-helmet feel, and it’s due to the neck-rolls needing to snug up against the wearer’s neck, blocking more turbulent air and quieting the ride. It has a supportive, yet perfectly-plushy feel relative to that of the RF-1200 and much closer to the Neotec II.

I’ve been more than happy with the interior, even after wearing it for a couple of all-day weekend rides. Of course, for those with a round-oval head shape, Shoei is most likely going to be a good match for you, but we always remind readers that they’ll need to work with trained retailers to ensure that the helmet fits properly. A poorly fitting helmet, regardless of its quality, is not an effective helmet.

As this is a sport-souring helmet and not a pure sport helmet, Shoei has chosen to go with the same ratchet strap that’s found on the Neotec II, leaving the double-D ring for sport and race helmets. In the US, this is still a divisive issue. However, Shoei has been using the ratchet strap in Europe on several different models for several years. The ratchet strap is easy to use and can be locked into place with gloved hands. 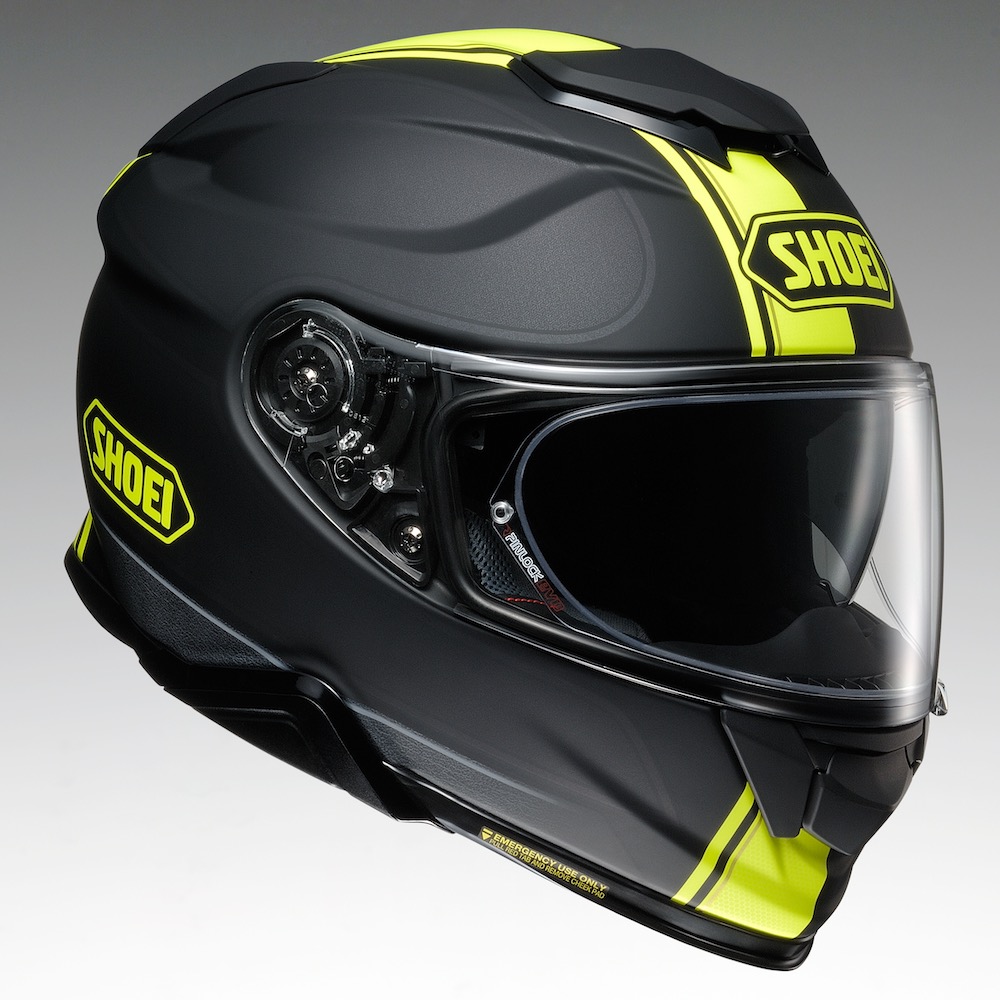 Shoei is in the upper echelon of helmets—that much is apparent when you take the time to appreciate the design and quality of construction. The adage of ‘you get what you pay for’ certainly applies because you’re getting quite a bit of helmet and the sticker price does own up to the fit and finish we’ve come to expect from Shoei over the years.

If you were a fan of the original GT-Air, chances are you are going to be a fan of the GT-Air II, as Shoei has only sweetened the recipe without souring it a bit. For riders who need to do a little bit of everything, short of off-road or track riding, the Shoei GT-Air II is up your alley.