Austin-based Revival Cycles just pulled the veil off their newest build, affectionately dubbed The Birdcage. Corresponding with the Handbuilt Motorcycle Show – and MotoGP – weekend, a few journalists were treated to exclusive access to see the Revival shop and to hear first-hand what inspired the new titanium-caged Beamer. 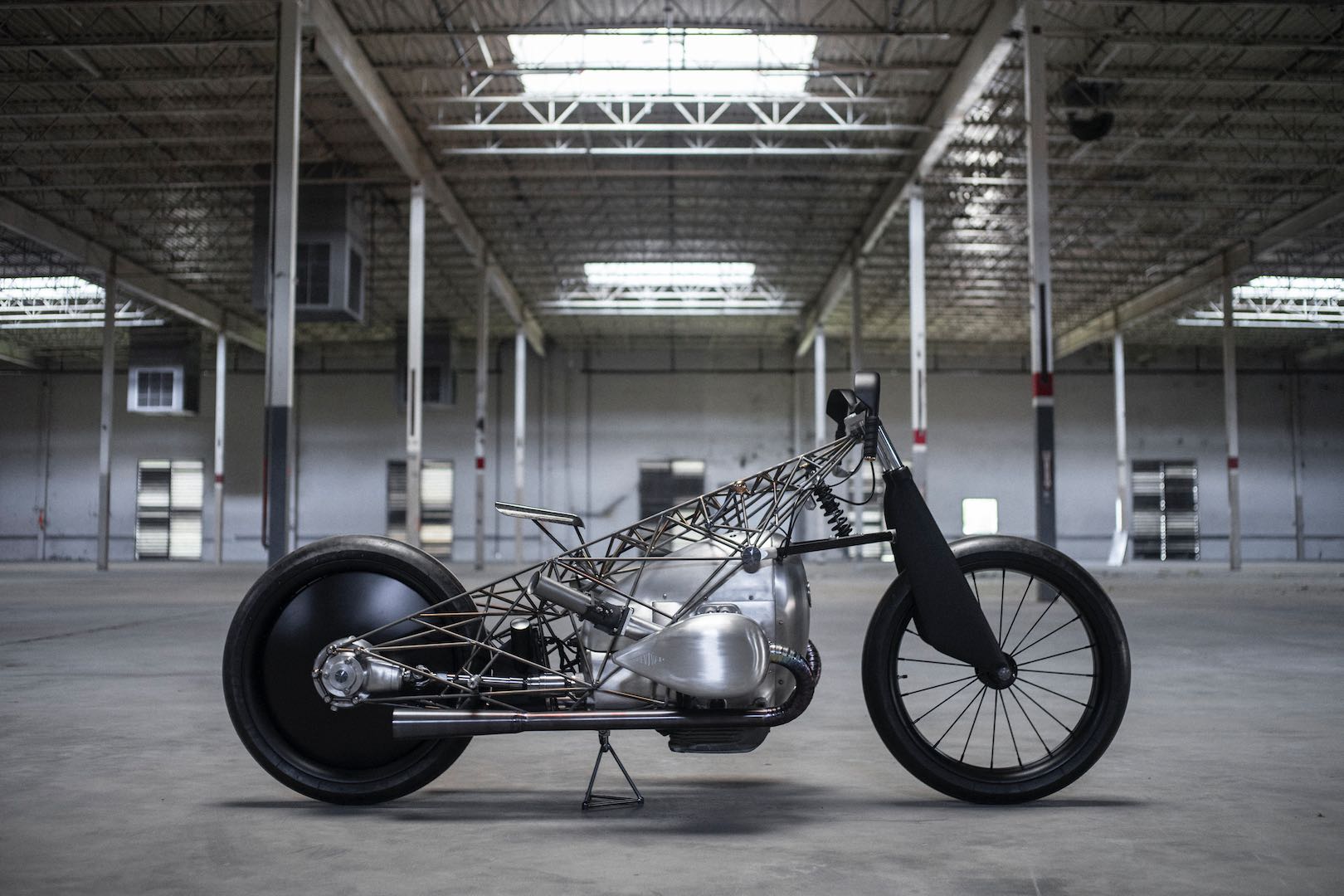 Based around a prototype BMW engine and drivetrain, many of the details of the new unit were left to speculation. The motor itself is clearly a beast and we’re venturing to guess is a whopping 1800cc.

Though we prodded for answers, the BMW staff did their best to neither confirm nor deny specific capacity. The Birdcage is the second custom BMW donning the new motor/trans combo with the first being “The Departed” – a stunning land speed racer by Japanese custom shop, Custom Works Zon. 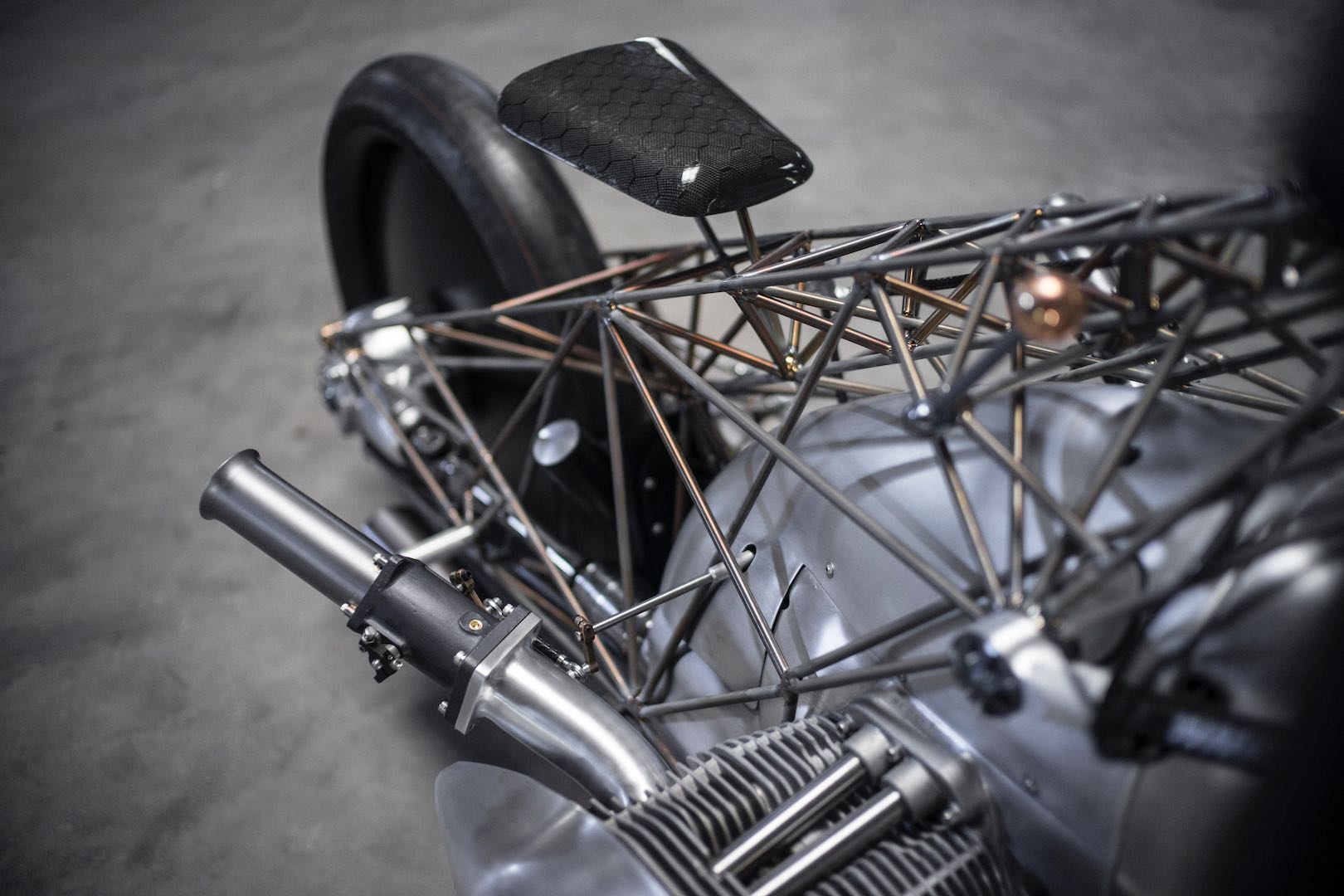 As a motorcycle manufacturer, if you want to grow market share in USA, there’s no denying that you need to take a hard look at the cruiser segment. BMW has their eye on the prize. Timo Resch, Vice President Sales and Marketing BMW Motorrad shares, “Naturally we want to keep growing. One step we will take to do so, certainly in the US market, is to enter the Cruiser segment. BMW Motorrad is consistently pursuing its growth strategy with the clear aim of becoming the number one in the Premium Big Bike Segment.” Timo also shared that a production motorcycle with the new Big Boxer for the cruiser segment will come out sometime in 2020. 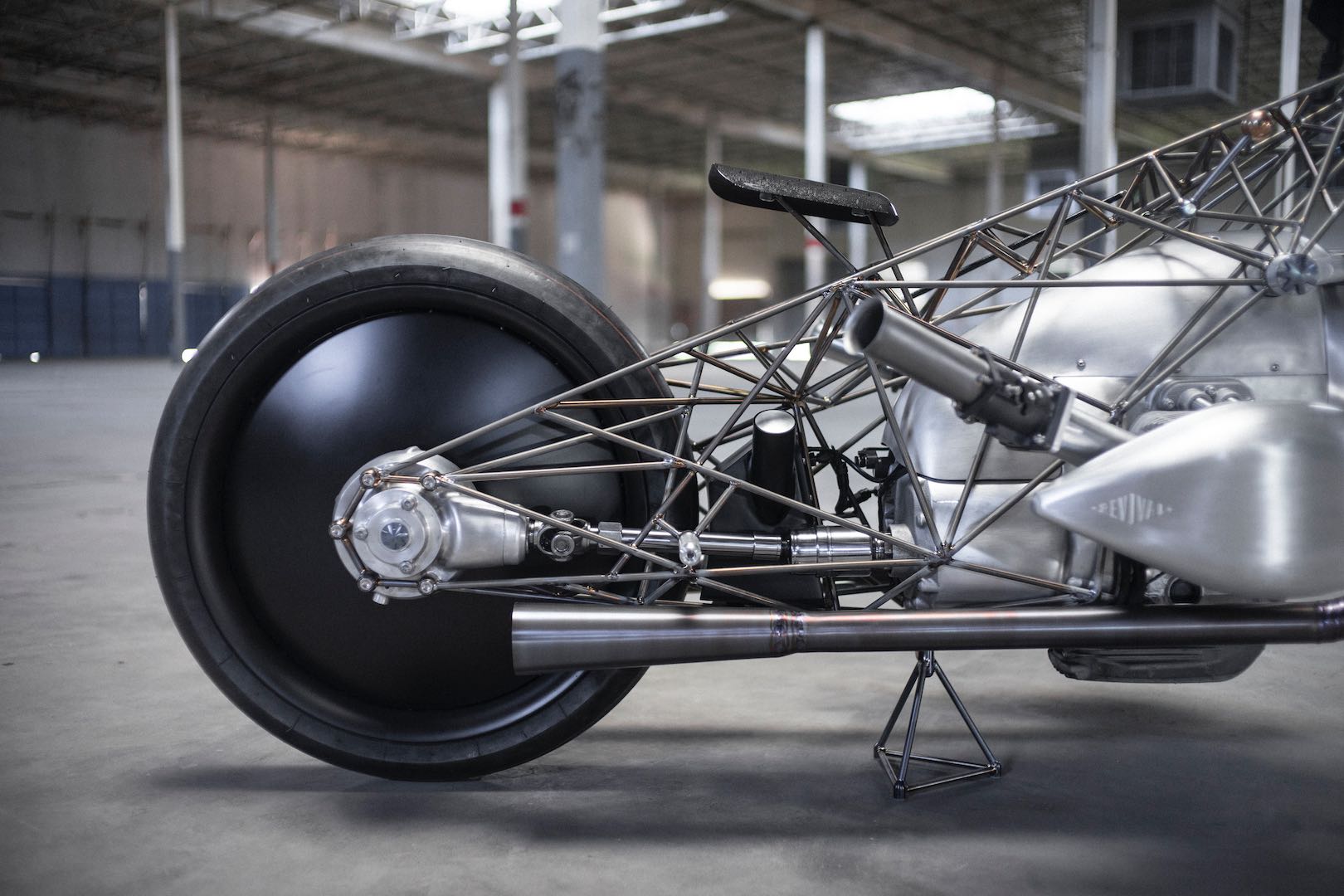 BMW and Revival have had a long-standing relationship and BMW knew that they could trust the Austin crew to do their thing. And boy did they! When setting off to tackle the new project, head of Revival, Alan Stulberg, drew inspiration from Ernst Hennes’ record-setting machines from the late 1920s and early 1930s.

The overall lines of the bike, forks, and handlebars are reminiscent of the Hennes Beamer from nearly a century ago, while the framework itself gives a nod to the lattice tube frame of a Maserati Birdcage of the early 1960s.

“We had already dreamed about this bike for years and in December 2018 we received the engine and could finally get to work”, says Stulberg. “I have always been a fan of the boxer engine, but the pure physical size and aesthetic appeal of this prototype really inspired us.”

The minimalist birdcage frame and subdued colors allow the new boxer to stand out as the primary focal point of the bike. 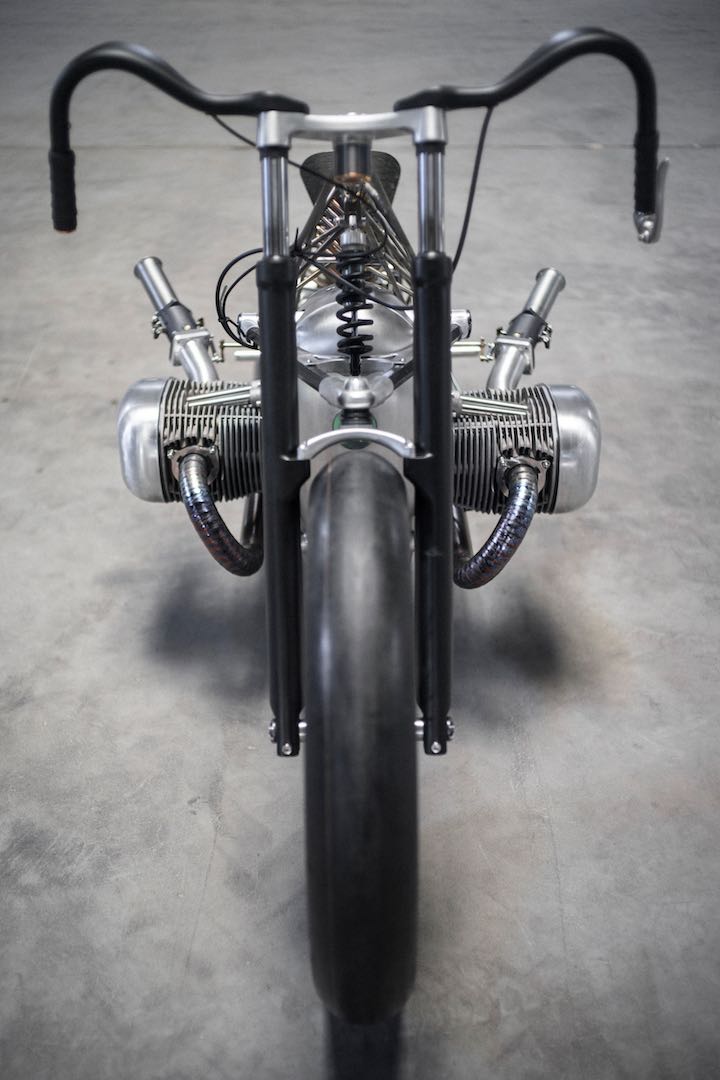 Utilizing 9mm titanium rods – their first time with the material – they welded together 134 pieces to create a visually stunning final product. “I wanted to establish the engine as the absolute most extraordinary feature of the build,” says Stulberg.

Most of the framework is asymmetrical; with the backbone serving as the only fully symmetrical piece. Otherwise, the staggered cylinders, the drive linkage on the right side of the motorcycle, and other components are installed asymmetrically. Further experimentation on the Birdcage was in the anodization process.

In addition to the frame being made from titanium, any blue fasteners, rods, and exhaust you see on the bike have also been crafted from Ti and were anodized in house. Lots of trial and error took place, but each attempt got them closer to the desired look. Total weight of the birdcage frame is a claimed 25 lbs. and the full build took approximately 5 months to complete. 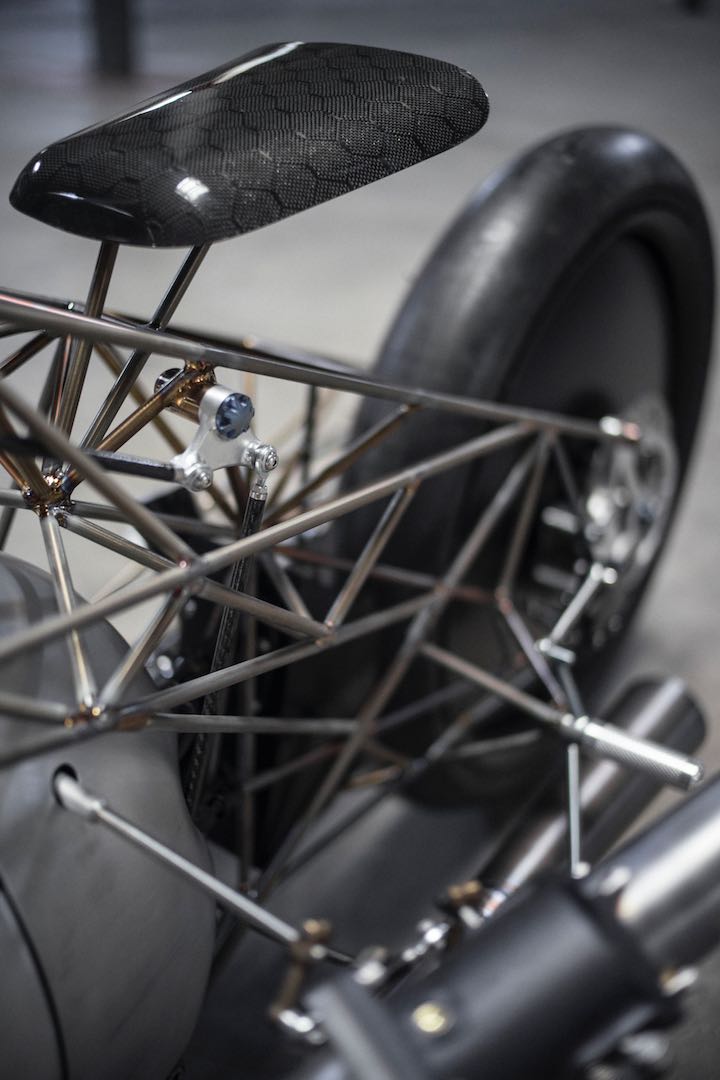 Pushing Their Own Limits

The frame of the Birdcage is made of titanium and was built in-house by Revival. “This was our first time to build a frame with titanium, that alone was already a significant challenge”, says Alan.

“Regardless, the frame came together very well in the end and we are very pleased with the result as it accomplished the goal of being nearly transparent. We wanted to focus attention on the engine and that is precisely what we achieved with this completely unique frame we designed. You can easily view the engine and the drivetrain from all angles.”

In addition to the frame, nearly every other part on the bike such as handlebars, footrests, shift lever, seat, calipers, and unique carbon suspension components were all individually crafted. 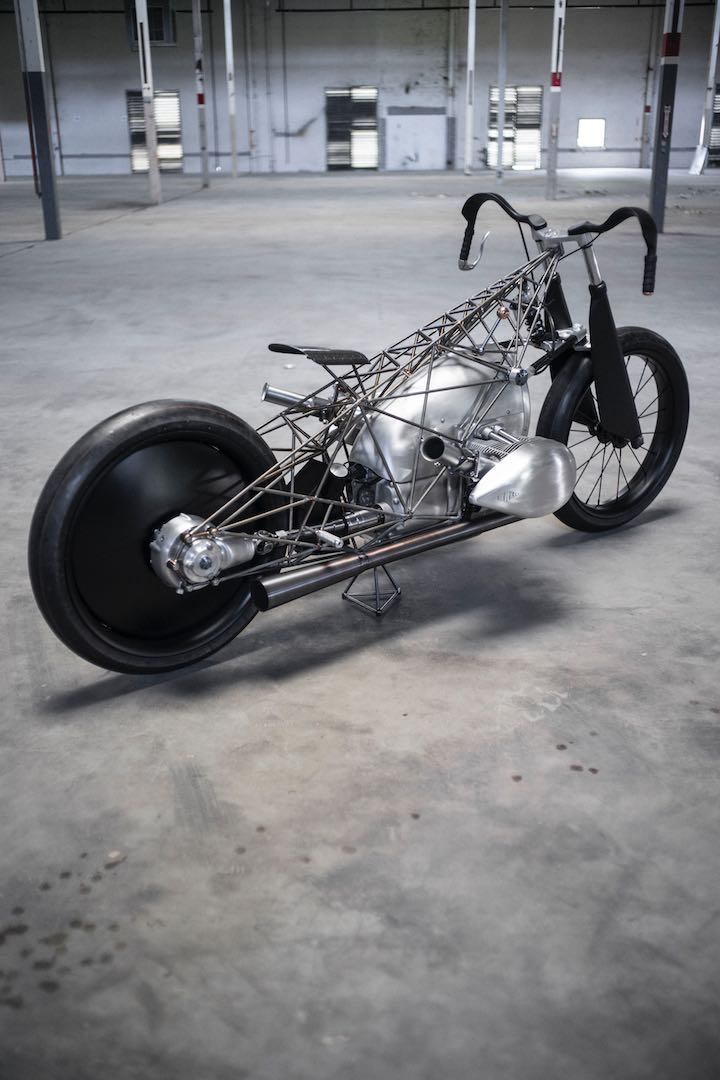 Dunlop to the Rescue

Mostly existing in either 17- or 18-inch options, none of the standard tires appropriately speed rated visually worked for Stulberg. He needed something bigger. It wasn’t until one fateful day when none other than former MotoGP Champion Kevin Schwantz popped into the Revival workshop that their luck took a turn for the better.

Alan mentioned his difficulties finding a tire big enough to suit his tastes and Schwartz pulled out his phone and dialed up someone important at Dunlop. Before Alan knew what had happened, Schwantz had a set of 23-inch prototype slicks en route. It’s good to have friends in high places. 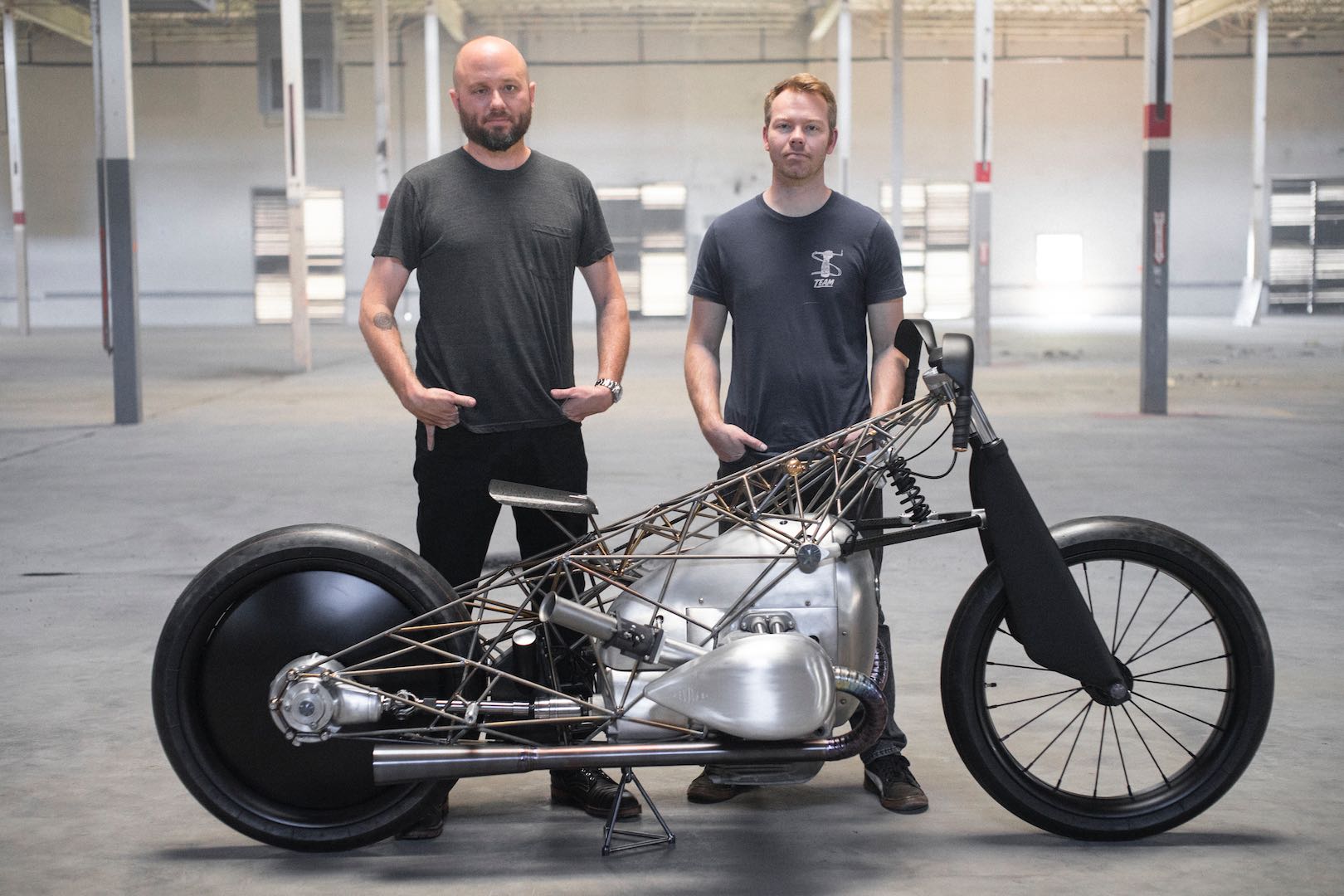 Doing It Their Way

Revival Cycles is based in Austin, Texas and the slogan adopted by the quirky city is “Keep Austin Weird”. The Revival crew is doing their part by pushing boundaries and by refusing to conform to any standards. Being self-professed “moto nerds”, Alan and crew are not afraid to do things differently. In fact, they prefer it that way.

The Birdcage was a dream for some time and once they saw the new giant boxer, they knew the time had come. Through many sleepless nights, lots of hard work, and an admirable persistence, the BMW Birdcage became a reality.

Patrick Flynnhttp://thebullitt.com/
A lifelong motorcycle enthusiast, Patrick Flynn has multiple years of experience as an OEM motorcycle marketer and over a decade as owner of his custom motorcycle site, The Bullitt.