The original Suzuki Katana—released in 1981 as a GSX1100S that was designed by BMW’s ex-chief of styling officer Hans A. Muth—began life as a performance-breed machine, one intended to satisfy the wants and needs of the passionate sport rider.

The motorcycle’s name derived from the Katana Japanese sword that features a single-edged curved blade with a long grip for two-handed use by the samurai.

As other high-performance models donning full fairings were introduced, including Suzuki’s own GSX-R line, the Katana’s sport attitude waned. Following the release of the 1985 GSX-R750, the air-cooled Katana’s persona was sliced from outright performance to the more comfortable sportbike in Suzuki’s lineup. The Katana name was used through 2006 in the states for the air-/oil-cooled GSX-F600 and GSX-F750, both marketed as sport-touring models. 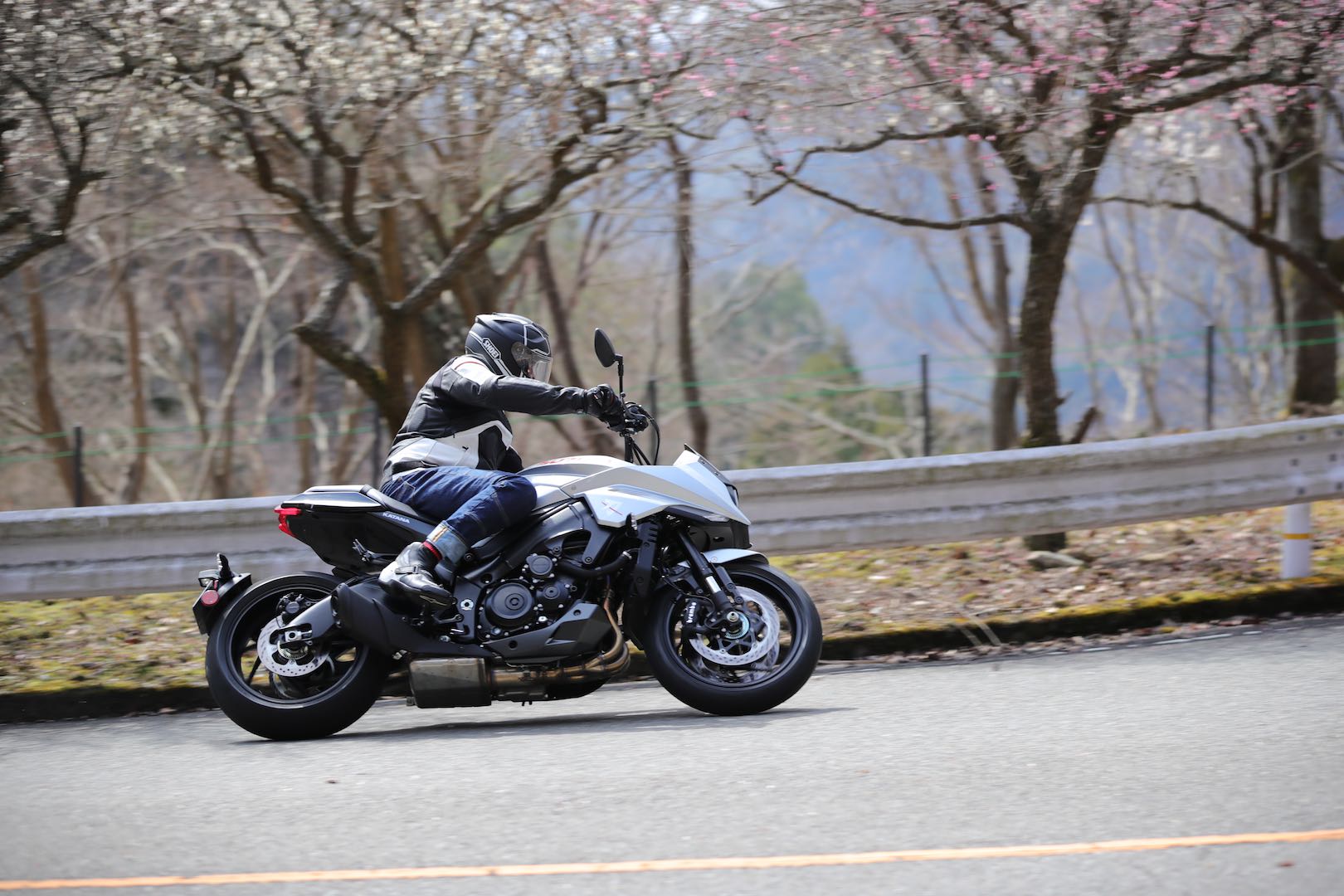 For 2020, the Katana name returns with no sport-touring intentions in mind, but rather a quest to conquer the sport-naked motorcycle category. I headed to Suzuki’s homeland in Japan to test the all-new Katana, which Suzuki Chief Engineer Satoru Terada designates as a streetfighter.

After ripping through Arashiyama Takao Parkway in southeastern Kyoto, which Suzuki had closed down for the journalists, my initial expectations changed. I anticipated much less from the 2020 Suzuki Katana, thinking I’d be riding a restyled GSX-R1000. Those thoughts changed, and quickly. 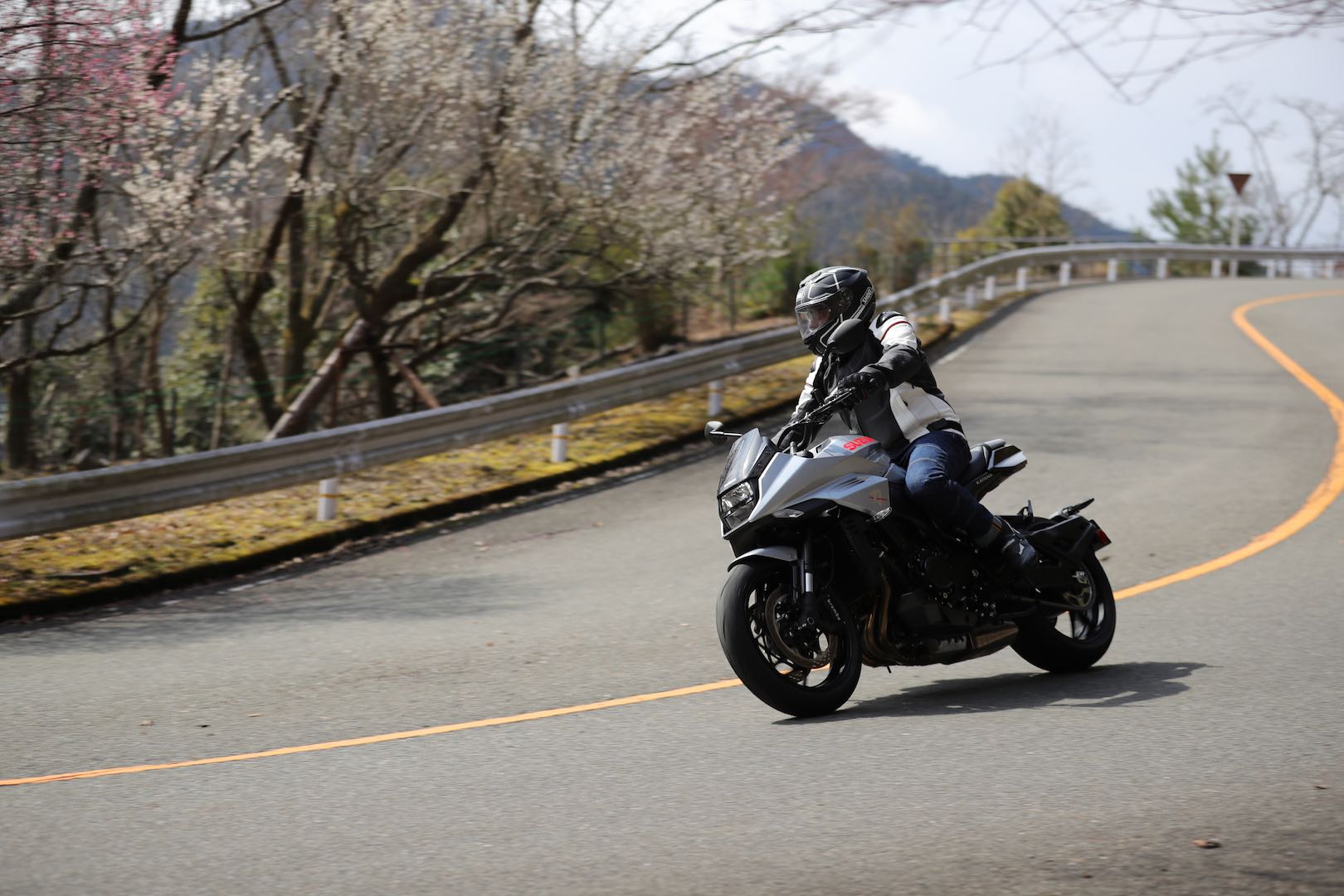 Following are the fast facts from my first-ride test.

1. Firstly, the 2020 Suzuki Katana is not just a throwback model based on the original 1981 air-cooled Katana, and it is not a GSX-S1000 with different bodywork. The Katana is marketed as a new model in Suzuki’s 2020 lineup and delivers the essence of the original 1981 Katana through some archetypal styling, such as the Metallic Mystic Silver paint and front fairing design. All else is based on the GSX-S1000, with the Katana overhauled in the ergonomics department and slightly massaged in the engine department to provide a comfortable naked sportbike—and one that majorly hauls ass.

2. The 2020 Katana is powered by the respected K5 GSX-R1000 engine, which was used in the GSX-R lineup from 2005-2008, and is the perfect mate for this motorcycle’s comfortable streetfighter intentions. The Katana’s engine, which produces a 150 horsepower at 10,000 rpm and 80 ft/lbs of torque at 9500 rpm, is tuned for optimal street manners, which was apparent from the first twist of the throttle. 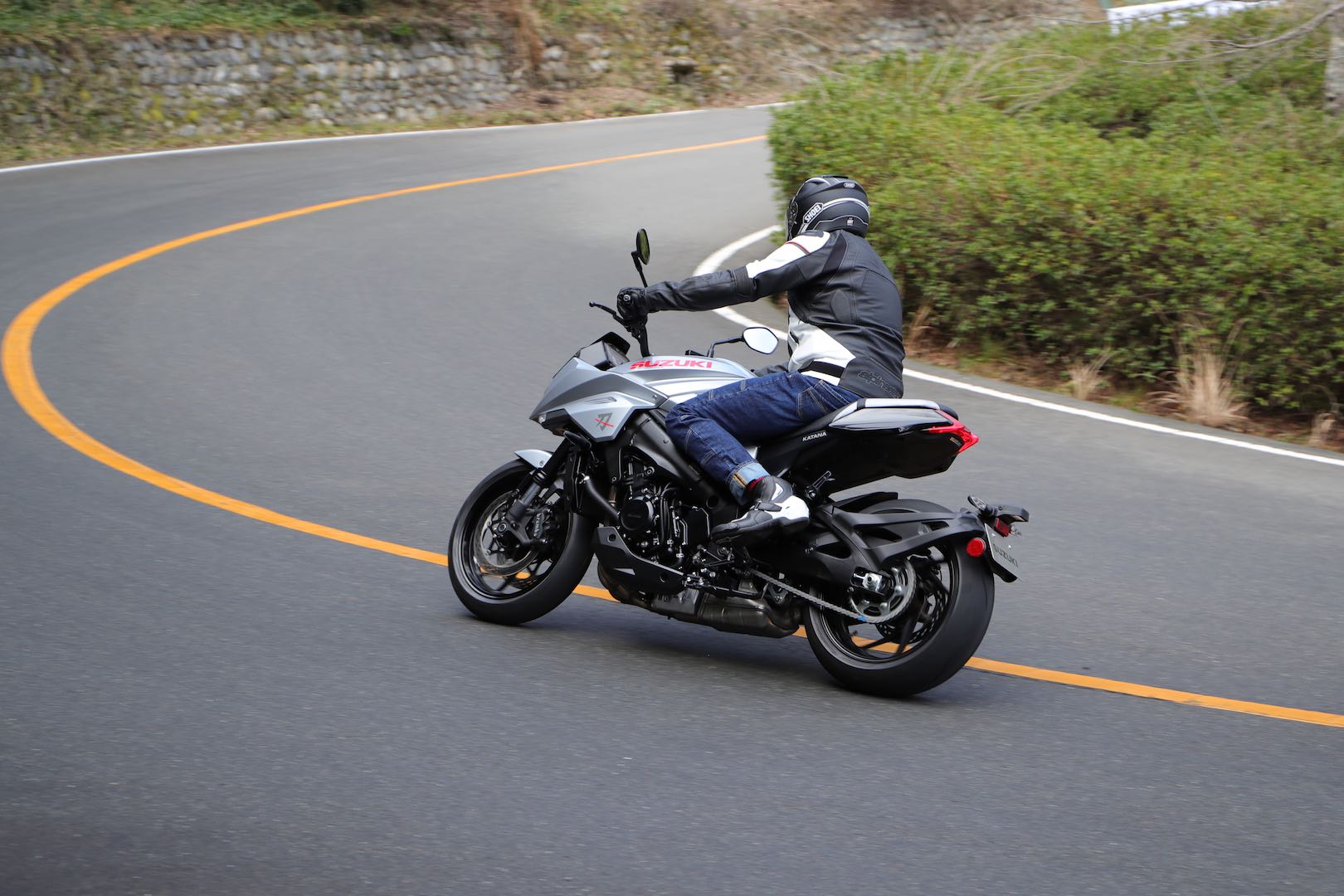 3. On the 2020 Suzuki Katana, you basically choose a higher or lower gear and let the engine cater to your sport or cruising-in-comfort attitude. During the damp morning test sessions on Arashiyama Takao Parkway, I kept the transmission mostly in third, allowing it to lug in the lower rpm range during the slower sections. The K5 engine never hiccupped. When I opened the throttle on corner exits, it revved quickly and smoothly to 10K and above, providing more than enough power to get to the next corner as quickly as I needed. When the pace quickened, I kept the Katana in second gear, enjoying the higher revving and instant throttle response.

4. The Katana’s revamped throttle control eases engine response when getting on the gas. Through some basic geometry changes of the throttle’s mechanical modulator and throttle cables, the engine does not accelerate abruptly when initially opening the throttle. This, along with low-rpm assist that revs the engine a bit to ease taking off from a standing start, provides an extra feeling of confidence when pulling from a stop, especially on steep inclines.

5. Spoiled from the smoothness of hydraulic clutches, I expected some grabbiness from the Katana’s cable-actuated clutch, but Suzuki proved me wrong. The cable clutch, used to keep costs down, presented no issues. The clutch pull is light, and it presents zero issues when downshifting fast while blipping the throttle to match the engine revs to the wheel speed.

6. The first thing diced on most sportbikes is the stock exhaust, but I wouldn’t touch a thing on the 2020 Katana. The Suzuki Katana uses a four-into-one Euro-4 compliant design that dumps exhaust into a single chamber, and then a single silencer. The exhaust emanates inline-4 musical tones—aggressive at high rpm and tame at lower rpm. This exhaust sound combines with the Katana’s intake noises for a remarkable musical sportbike experience directly from the factory. 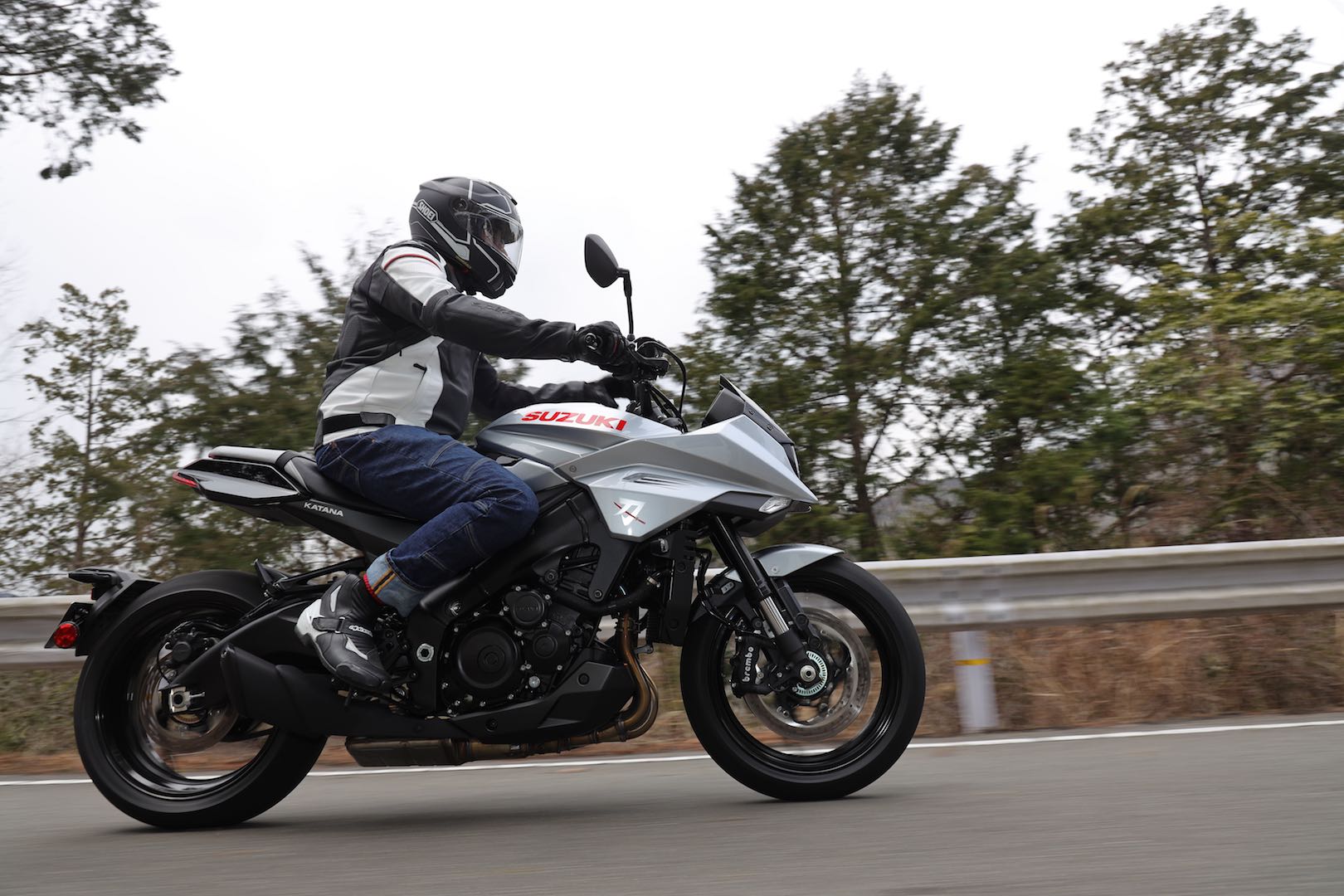 7. The Katana’s traction control works as it should, the system cut to a minimum to retain the naked-sport attitude. The three-level TC system is easy to use, and the setting can be changed on the fly via an intuitive switch on the left controls. I used level three—most intrusive for wet conditions—in the morning sessions and had no fears of slipping out on the wet portions of the road. By the afternoon’s three half-hour riding sessions, I used mostly level 1, which provided just enough slip if needed while getting on the throttle hard on corner exits. The TC can also be shut off when the hooligan surfaces and the wheelies begin.

8. The Suzuki Katana designers wisely used the same Brembo braking system found on the GSX-R1000, and they worked as Brembos should. The Katana features 310mm discs up front and a single 250mm disc out back. Emergency braking is aided by Bosch ABS, which can’t be switched off.

9. I had zero issues with the Katana suspension’s stock setup. I couldn’t say the same for the GSX-S1000F I rode last year, which felt a bit soft during cornering and needed some stiffer adjustments. The Katana’s almost fully adjustable suspension provided optimal input for reading the road conditions while at a spirited pace, and enough travel for comfort when riding at a leisurely pace.

10. The long “curb feelers” on the pegs never touched down. This was true even on some of the extremely tight, decreasing radius turns that are very similar to European roads. The Suzuki staff said these are designed to scrap when the tire’s traction limits are near. I never experienced any scraping at a fast pace – even when riding extremely lazy without leaning off the bike.

11. The sharp handling may also be attributed to the frame and swingarm, which are derived from the Suzuki GSX-R1000. The twin-spar aluminum frame provides solid input during aggressive cornering, as does the swingarm which is a direct transplant from the 2016 GSX-R1000. Once planted in a corner, the Katana holds a steady line just as a Gixxer 1000 would on the track. The Katana’s chassis setup provides a sporty 57.5-inch wheelbase that aids the chassis’ quick turn-in for sharp corners. 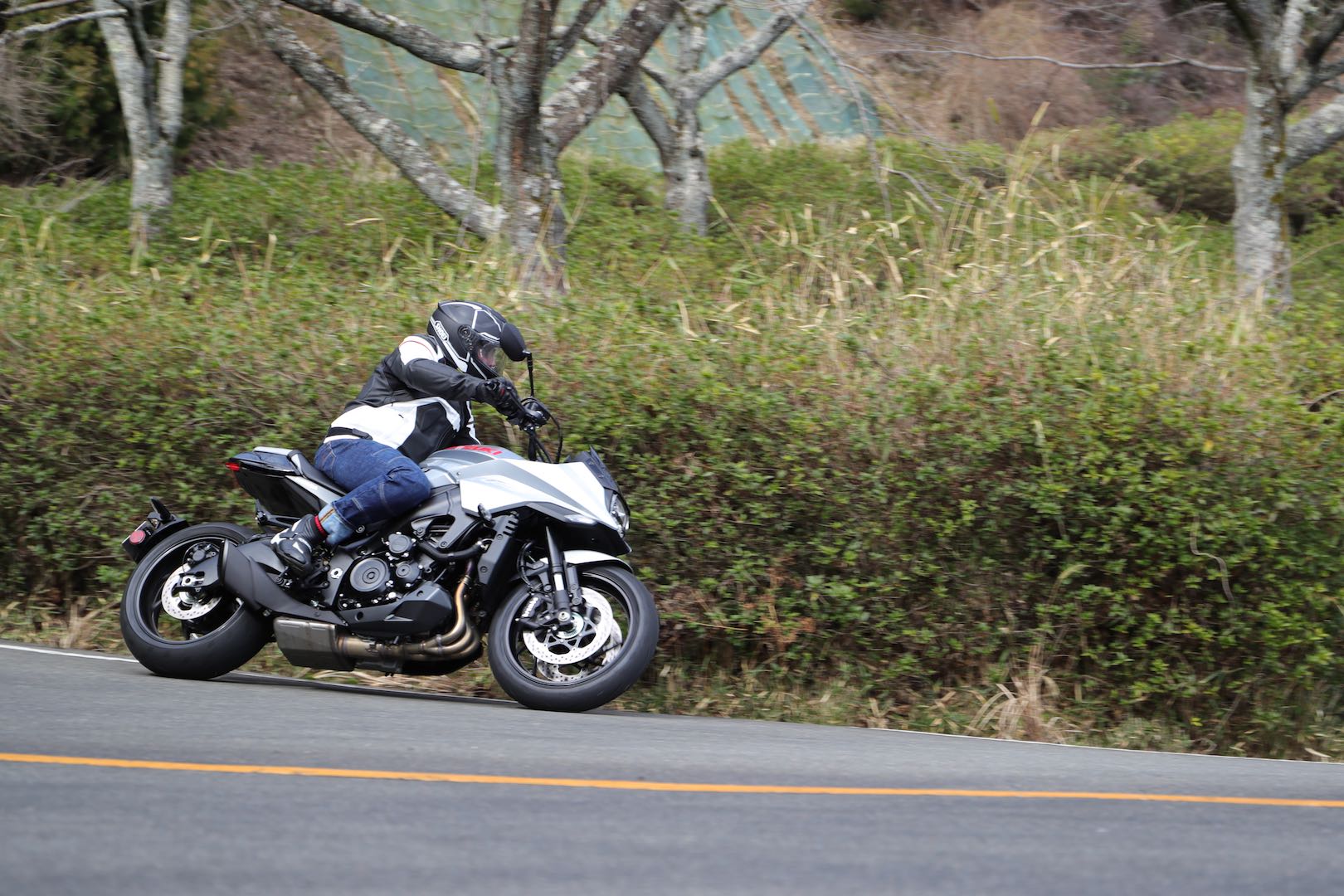 12. I immediately trusted the sticky Dunlop Sportmax Roadsport 2 tires, which are specially created for the 2020 Suzuki Katana. The tire combination—120/70 and 190/55—warmed up quickly, allowing me to push the motorcycle harder than usual for the first few miles.

13. Just as the chassis, suspension, and tires worked optimally out of the factory, so did the ergonomics. The rider triangle that connects the hands to the seat to the feet is comfortable for my nearly six-foot body. Comfort was high whether leaning off the motorcycle during spirited sport riding or remaining completely upright for commuting or touring. I credit the seat design—narrower at the front over the GSX-S1000—and the more upright bars for this comfort.

14. I admit I was displeased with the styling when I saw the initial pictures of the Katana, but in person, the bike has major appeal. The front cowl and gas tank feature an attractive 3D-like design that flows directly into the seat. Though the headlight is still a bit large for me, no worries, the linear-styled LEDs help offset this feeling. The 2020 Katana has Suzuki’s first-ever remote-style license plate and blinkers that attach to the rear swingarm, appearing to be suspended below the rear brake light. Although the wheels are from the GSX-S1000, they reflect the Katana name, mimicking the curved design of the Katana sword blade. 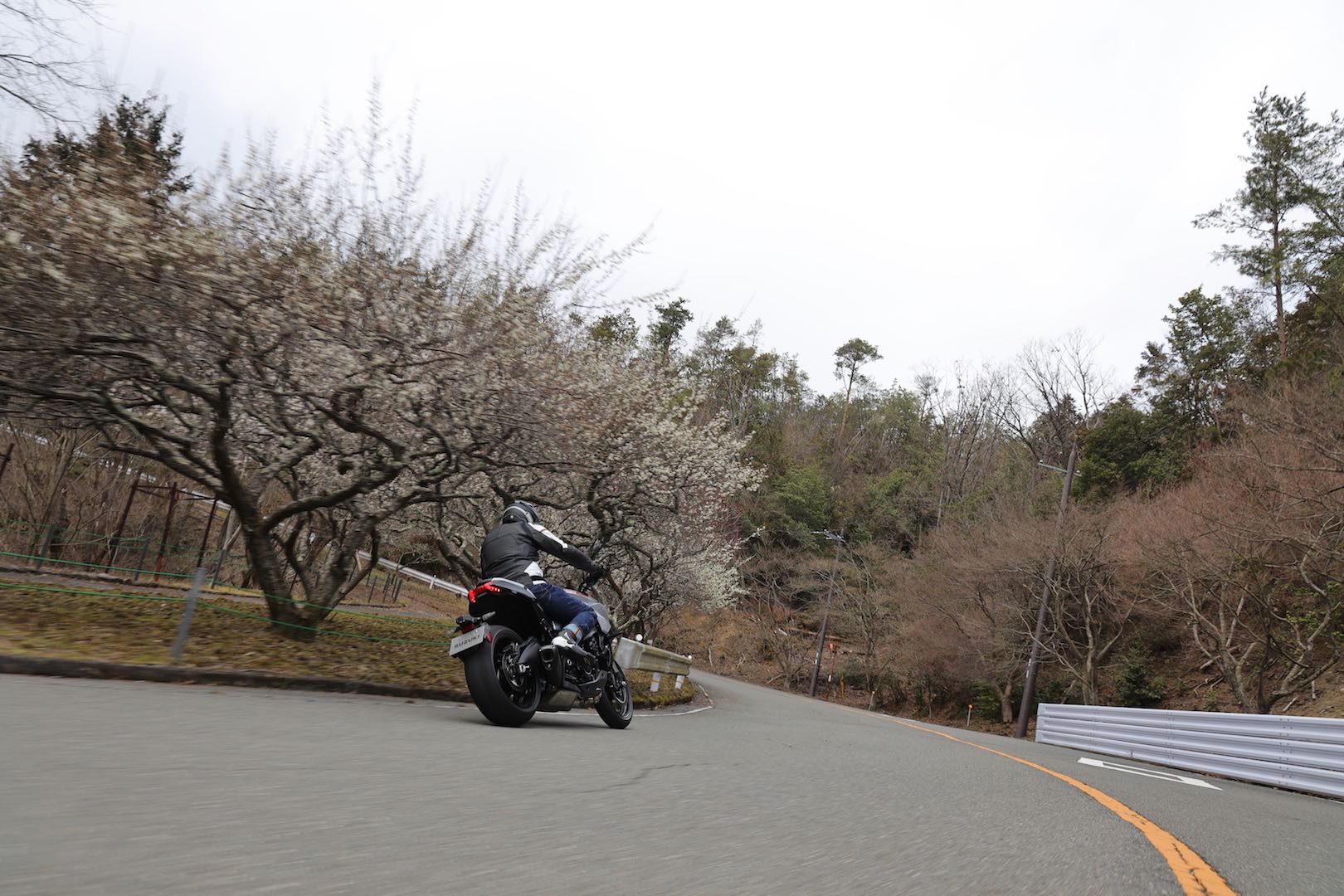 16. The 2020 Suzuki Katana combines the essence of the original 1981 Katana model with the modern world of technologically-advanced motorcycles—a combination that naturally presents challenges to get right. Suzuki nailed it; the Katana unites an already respected performance-breed engine with ergonomics that are tame enough for everyday commuting, yet ready for serious sport riding or sport touring.