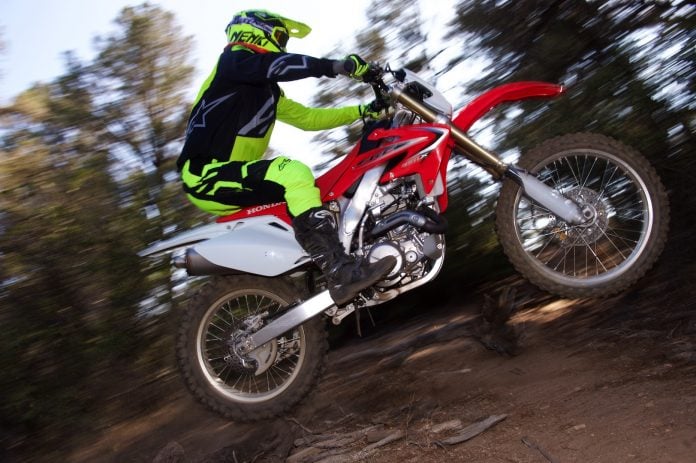 Introduced in 2005, the Honda CRF450X has been an impressive big-bore (96mm) trail motorcycle, with smooth, quiet and environmentally friendly power from idle to the rev limiter.Modified versions have had success in Baja racing thanks to its wide-ratio transmission and 18-inch rear wheel, yet the CRF450X has always been most at home on the trails.In 2008, Honda updated the CRF450X, adding a steering damper, a new front tire, new triple clamps (tightening the geometry a tad), updated suspension settings, new discs, a smaller fuel tank (from 2.27 to 1.9 gallons) and seat to narrow the ergonomics, and an accelerator pump for the 40mm Keihin flat-slide carburetor.Although the range was decreased, it made for a better motorcycle, and one that would last through 2017. 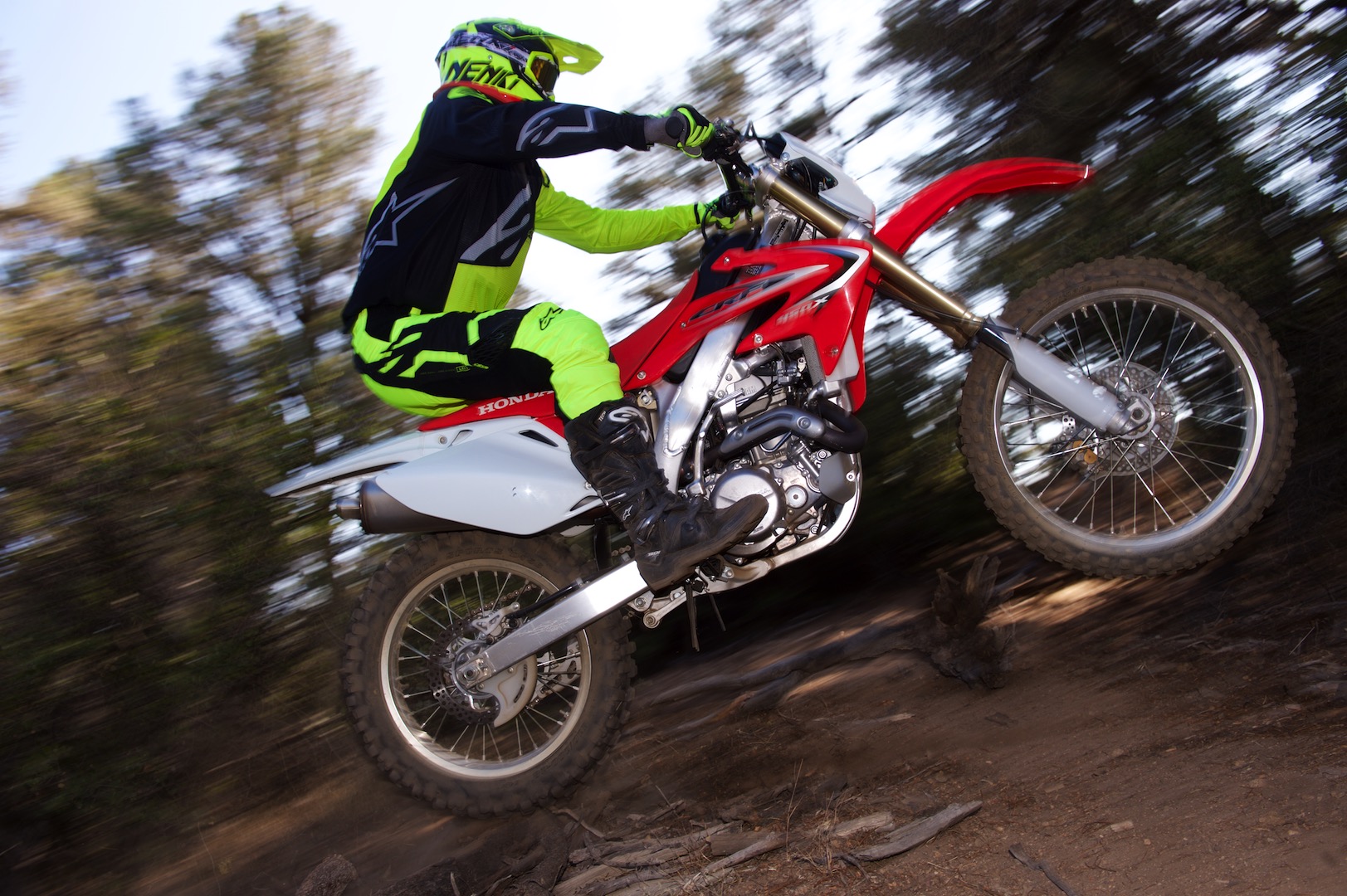 When Honda announced the all-new fuel-injected 2019 Honda CRF450X, we quickly requested an ’18 to get one last ride on the carbureted version. Sadly, we hadn’t noticed that the 450X had been quietly dropped from the 2018 Honda lineup, so we nabbed a leftover 2017 Honda CRF450X for our farewell ride on an old friend that has served us since 2005.The reality is, for a Green Sticker/EPA legal motorcycle, Honda worked magic with the CRF450X Unicam powerplant and the Keihin carburetor. While some Green Sticker compliant motorcycles require “adjustments” to make the motors behave as we would like, the CRF450X works just fine off the showroom floor.Firing up the carbureted Honda CRF450X isn’t much of a bother thanks to the strong electric starter. Yes, we have to reach down and pull out the tiny choke knob to get things going, even a warm day, and the warm-up time can be lengthy in the cold, so we won’t miss those things as the CRF450X goes EFI. There is a hot start lever on the left handlebar perch—we never used it, even on the hottest rides.It’s difficult to complain about the 2017 Honda CRF450X’s motor performance for trail riding. You can drop the big single’s revs to seemingly zero, yet it still pulls like a tractor and is highly reluctant to stall. It has a good size flywheel, so that helps keep momentum on the gnarliest of trails. Whereas the race-ready CRF450RX is very stall-prone, the CRF450X is just the opposite. 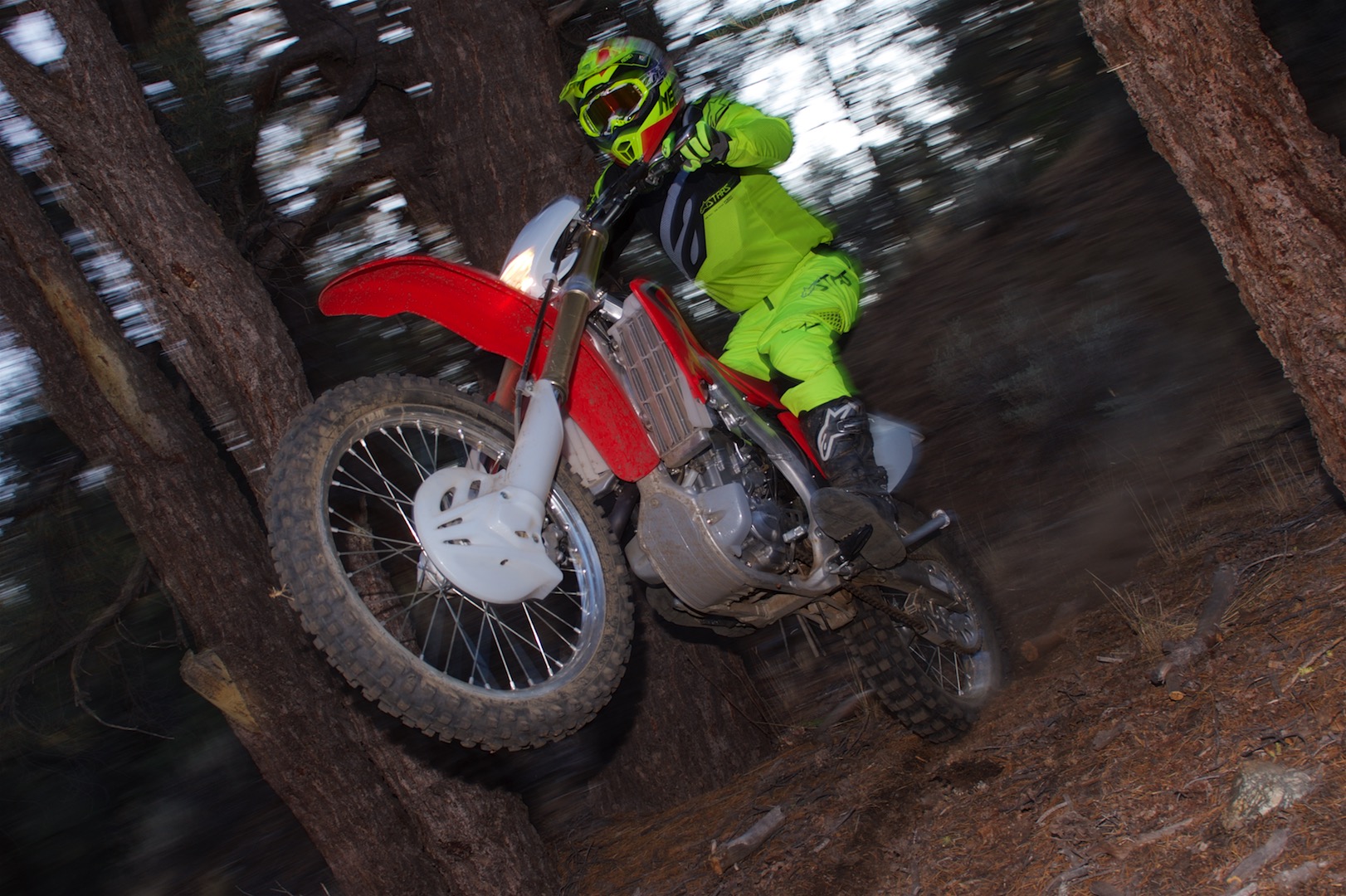 Of course, the 450X has a power delivery completely different from the 450RX. The RX barks and blasts, while the 450X is smooth as butter, though not nearly as fast as the 450RX. For trail riding and less than race pace, the powerband and controllability of the CRF450X’s motor is impossible to fault. It’s a fun motor to short-shift your way to whatever speed suits you.The wide-ratio transmission is flawless. It shifts effortlessly, and the ratios are matched perfectly to the broad powerband. You have to work hard to be in the wrong gear on the CRF450X.The throttle response of the 2017 Honda CRF450X is one of the most impressive things about it. For a carbureted motor, it’s clean and willing to accept hard throttle twisting without stumbling—even when blipping over logs, rocks, or washouts on the trail. Credit perfect set-up by Honda and Keihin, along with the accelerator pump. Other than the overall padded down power, the CRF450X’s motor belies its low-emissions tuning.Handling is perfectly neutral and intuitive on the 269-pound 2017 Honda CRF450X. It turns nicely in the tight stuff without demanding you sit on the bars, while staying stable at higher speeds thanks to the Honda Progressive Steering Damper (HPSD).While the non-adjustable HPSD works well at high-speeds on hardpack or in rocks, I never quite got on with it in the sand due to headshake—one of my few complaints about the CRF450X. 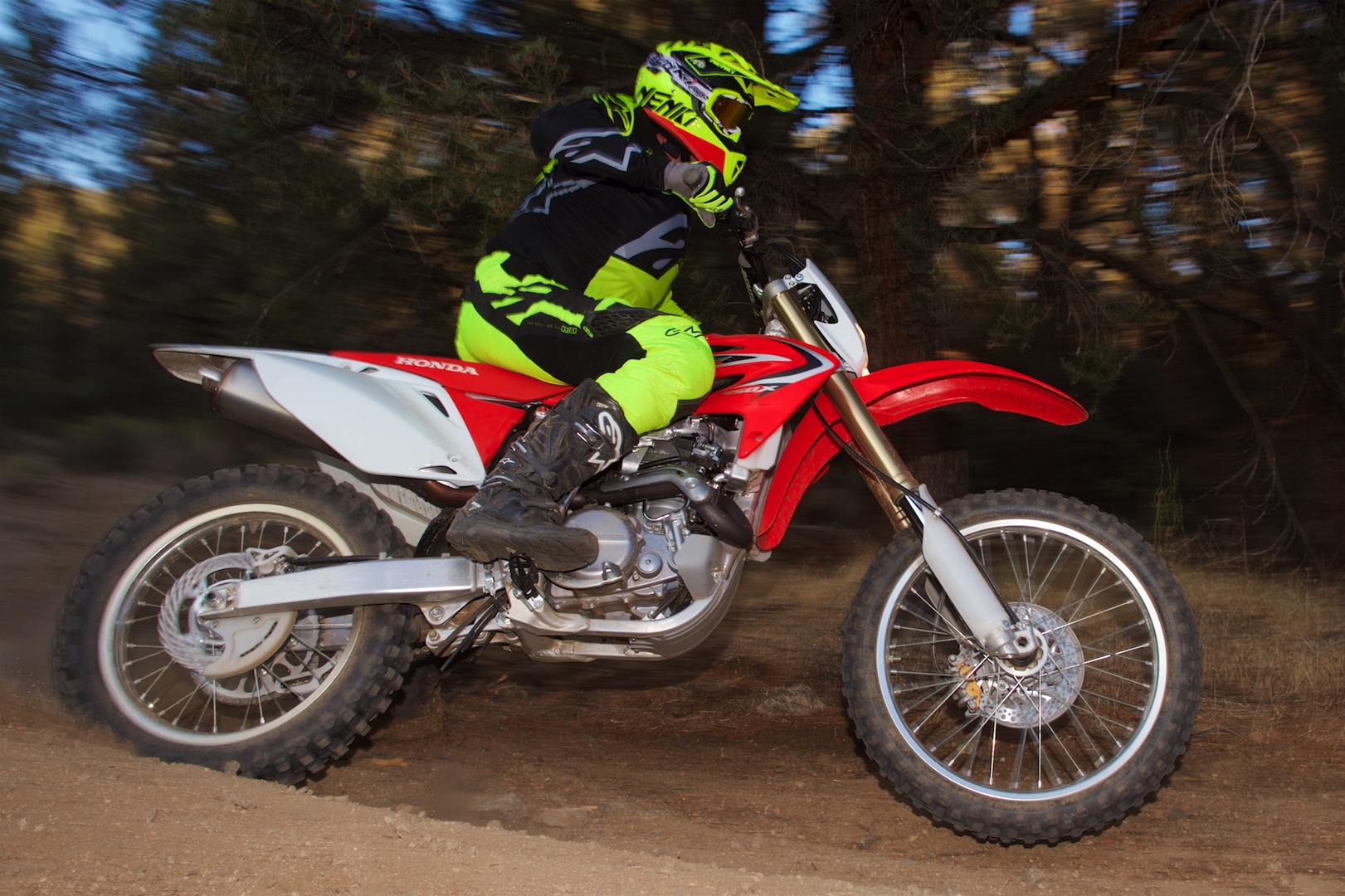 The Showa suspension is neither the latest nor the greatest, yet it does a fine job in a wide range of conditions—perfect for trail riders. The Showa Twin-Chamber Cartridge fork is fully adjustable, as is the Showa shock.A patient owner can set it up exactly to his taste, though many riders in the engineers’ target weight and skill range probably won’t do much fiddling with the settings. The suspension is balanced, and is plush without wallowing excessively. It’s not close to racing-spec suspension, but the 2017 Honda CRF450X is not trying to be a racebike.The softish settings help the budget Dunlops get as much traction as they can. If you grab the last of these babies, save the tires for resale and put premium rubber on right away.Honda, as is the tradition with its off-road bikes, gets things such as the controls and ergonomics perfect. The brakes are perfectly predictable, and the cable-clutch doesn’t have an excessive pull. 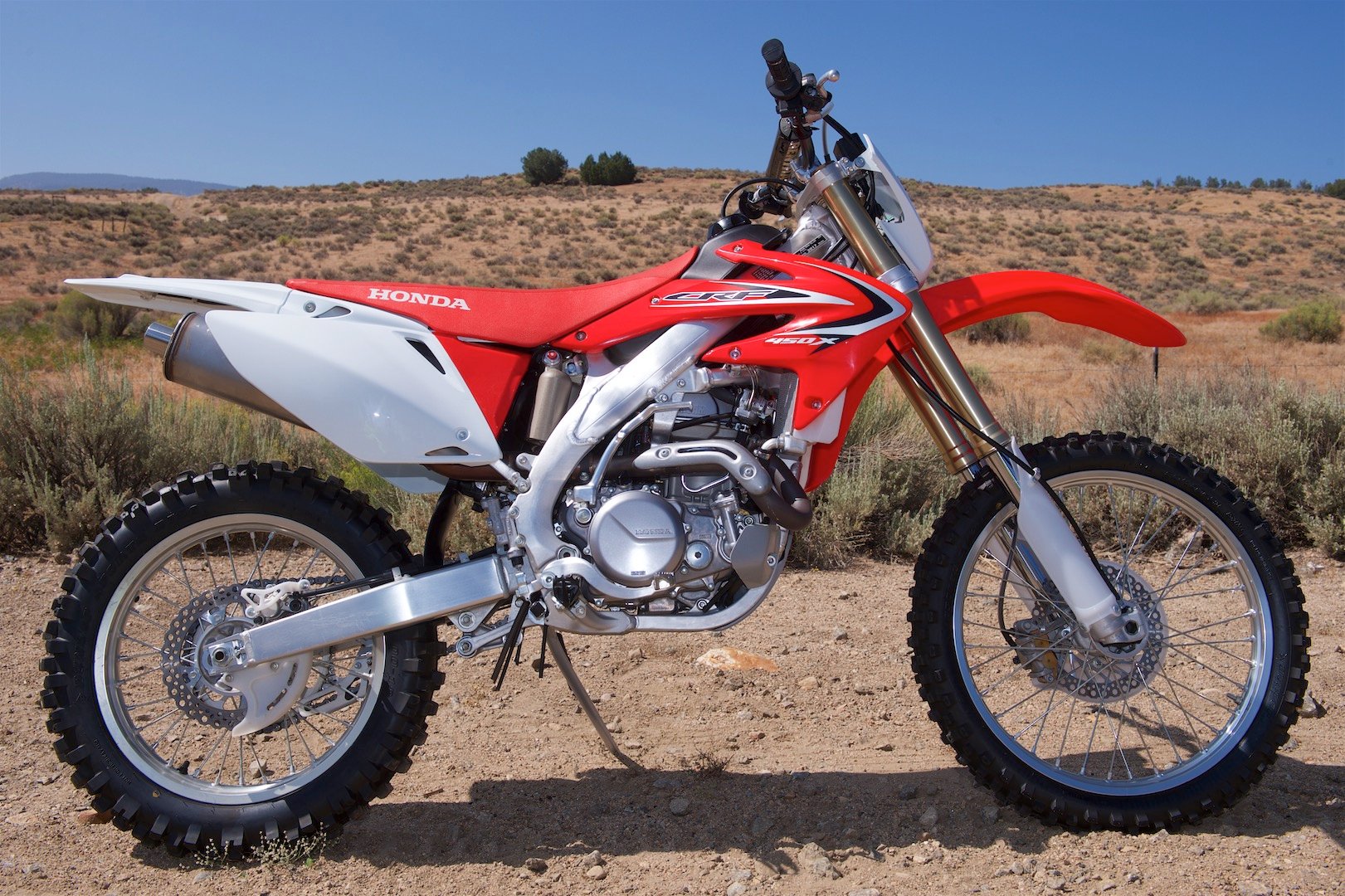 Everything works as expected, so you can concentrate on riding without distraction. The only thing missing are handguards, but that’s easily remedied, and you can put on whatever guards best suit your riding area.The triangle from the narrow seat to the decent pegs to the grips on the 971-bend Renthals is a friendly one. Transitioning from sitting to standing, and back, is as effortless as it’s going to get.It might seem like I have mixed feelings about the demise of the carbureted Honda CRF450X, but I don’t. The 2019 Honda CRF450X, with its fully modern chassis and new fuel-injected motor almost certainly will be a huge leap forward. Our test of the very similar new CRF450L dual sport motorcycle strongly suggests trail riding nirvana.As much fun as the outgoing 2017 Honda CRF450X is, the biggest thing we’ll miss is the $8699 price tag, which is $1100 less than the new CRF450X.However, we’re expecting that the additional grand or so will be money well spent. Keep an eye out for our test of the 2019 edition in late October 2018. 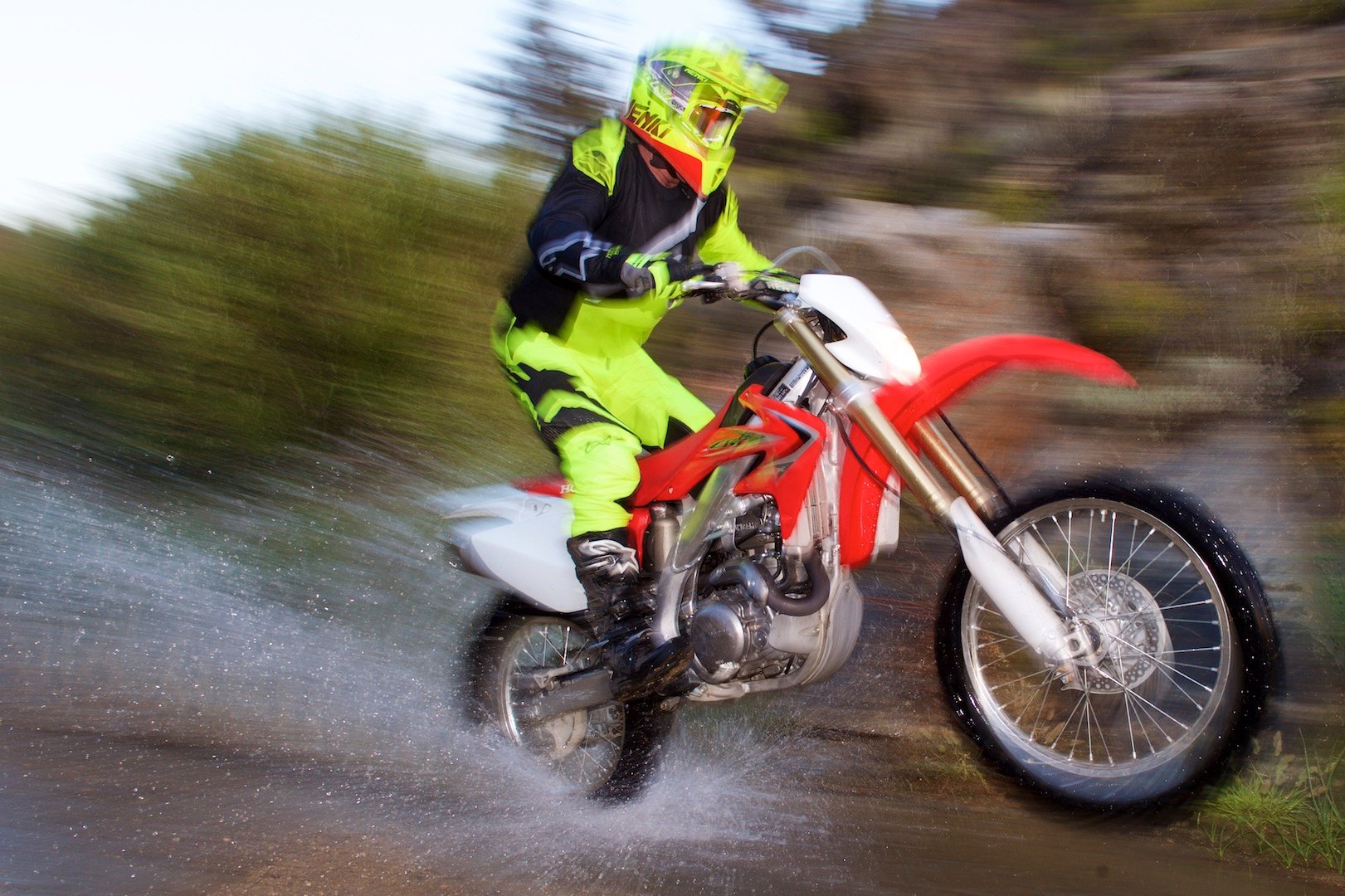