The last time my father rode off-road was in 1970. He was a sophomore in high school, and had a Honda Dream 305 shod with knobbies.The knobbies weren’t intentional; money was scarce for him as it was for many of us during teens, and the only tire that was in budget had some knobs.That budget had some influence—nearly 50 years later.By the time dad graduated high school in 1972, things had changed. His father had turned his restaurant/bar Lieback’s Lounge—yep, that’s where my column title came from—into a success.This provided some working cashflow for my dad, and the Dream 305 was gone. In its place was a 1972 Harley-Davidson Sportster. And like most riders of American V-twin machinery, that platform progressed, and his standard ride today is a Heritage Softail.Besides motorcycles, my dad’s other passions were the outdoors and guns. That translates into many things I loved since, especially the fishing and just wandering around the woods. My dad will never admit he’s a hiker; it was always hunting.But for me, it was hiking and just enjoying the peacefulness that I continually return to—take a look at my back yard. Wifey and I looked at 36 places before purchasing. When I first stepped into backyard here, where I’m writing this very column, the 3600 acres of game lands were the selling point. The only thing I ever hear are animals and my music, and I don’t have to pay taxes on them.No cars. No neighbors. True hillbilly, as many of my West Coast friends say.Though I grew up in a cruiser environment—basically a Harley-type world due to my dad and uncles—I fell for speed and sport touring when I hit 18. Ten years later I discovered the world of adventure touring. Now I had speed and the ability to go wherever the hell I wanted, and it didn’t require just asphalt.My passion for ADV grew strong, and I became as obsessed with the ADV scene as I did track riding and sport touring. Most of my ADV stories revolved around a 2002 Suzuki V-Strom DL1000. The bike made the cover of American Motorcyclist back in 2012, and was the proverbial steed for many of my “solo soul searching” writings.Typical of Suzuki, there was not one issue, even after 60K miles. I learned the basics of big-bike ADV riding on the Strom and, as you can imagine, it was sometimes painful. The Strom—nicknamed El Mule due to its mule-like riding ability—was the best trainer ever. I also led Touratech Rally groups aboard it when most bikes behind were worth 10x the Strom.Time progressed, and life changed for me, just like it did for my dad when he bought that first Sportster back in ’72.Forward to 2018, and my new ADV whip is a KTM 1190 Adventure R. Suddenly I can do things with simplicity that were once extremely difficult on the Strom. How did I ever ride without a 21-inch front wheel?From single track to climbing local coal banks, the 1190 reminds me of a thumper dual sport, but with the street-going agility and power of my Ducati Multistrada.Due to my history with El Mule, I didn’t want to part ways with it. There was only one solution—give it to my father as a late Father’s Day gift.There were stipulations. I demanded he relive some of the carefree moments he had 46 years ago on that Honda Dream. No worrying about shining chrome; beat the damn thing, and let the rain clean it. 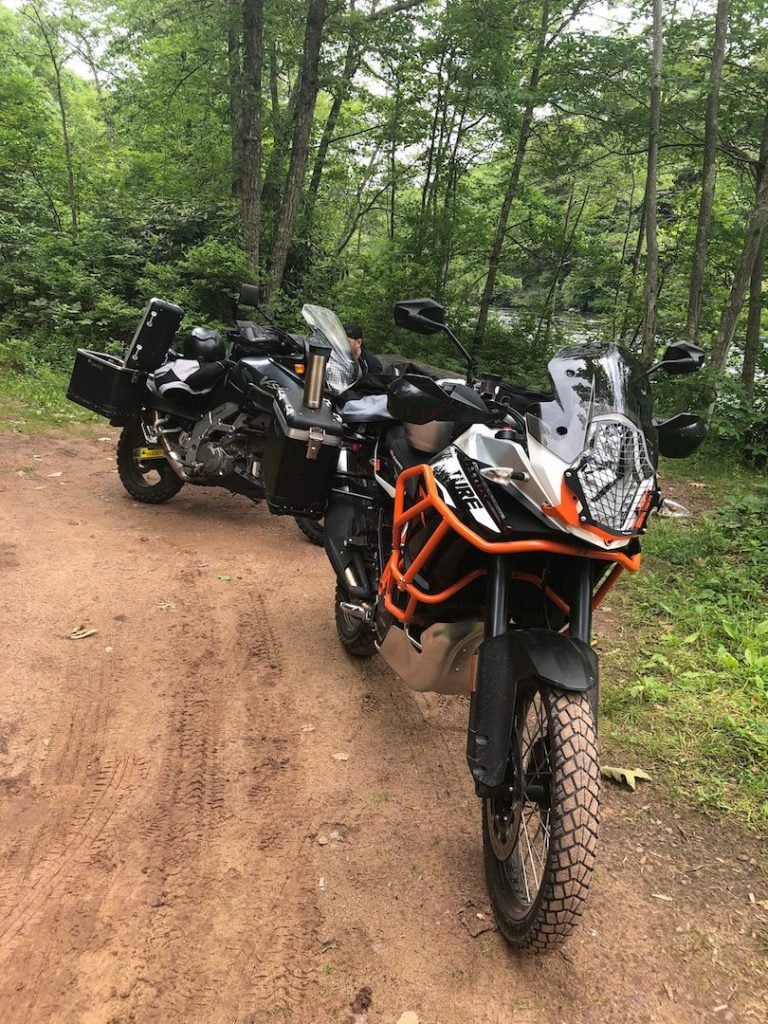 It took a few months, but he finally took me up on the deal. Two weeks ago we had our first ride, and I brought him on many fire roads that lead to fishing spots around Northeast Pennsylvania—places where he took me when I was a youngster; places that helped me discover my love of the outdoors.I won’t lie. I was nervous because El Mule takes balls to ride fast and it sucks to pick up when dropped, which it had been at least 100 times. I didn’t want to see dad crash.He’s a cruiser guy, I was thinking—one who didn’t ride off-road in 40+ years.He immediately impressed. After about 25 miles I began to push, and there he is in my mirror. So I pushed a bit harder—just enough to keep things fun and a bit unsettling, but, um, safe. And there he was, still in my mirror.The day ended at just over 100 miles. Soon he was locking up the rear brake around corners, and leaning back while throttling through these huge mud puddles. This guy is in his 60s.Suddenly, our 24-year age difference was meaningless. Suddenly, we were just two riders putting bikes through the paces without a worry in the world.I was never one to believe in natural-born talent in motorcycling. I always believed that all that happens by training and discipline.But some people just got it. My old man’s one of them.I know with a few more off-road rides I’ll be able to push him even harder, and he’ll ride that Strom better than half of the dudes I teach on a BMW R 1200 GS or KTM 1190 Adventure R ADV like mine—expensive motorcycles that have traction control in the dirt (seriously!).“Old Man” means zilch for my father.I’m truly blessed to have my dad around, and equally blessed that he’s not solely dedicated to the cruiser scene like most guys his age—especially in my area where people spend more on Harley apparel than their motorcycles.I’m also blessed that he’s willing to push a bit, which is simply my style of riding. The only concern I have now is what will happen when he rides my 1190 R, which will surely happen. I got a good feeling that Heritage of his will be replaced with something a bit more exciting for us outdoorsy types.