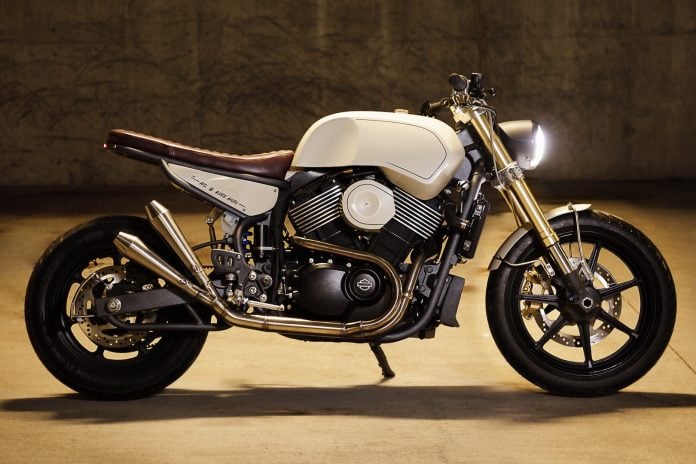 South of the tiny town of Philipsburg in picturesque western Montana sits a humble 300 square-foot fabrication shop.Inside is Colin Cornberg, a transplanted Kiwi who has planted roots near Georgetown Lake. There, No. 8 Wire Motorcycles has been producing builds of all shapes and sizes since 2013.The Harley-Davidson Street XG750 has been a prime choice for many beginning motorcyclists for a multitude of reasons, above all—it is an inexpensive way to get a foot in the H-D door. 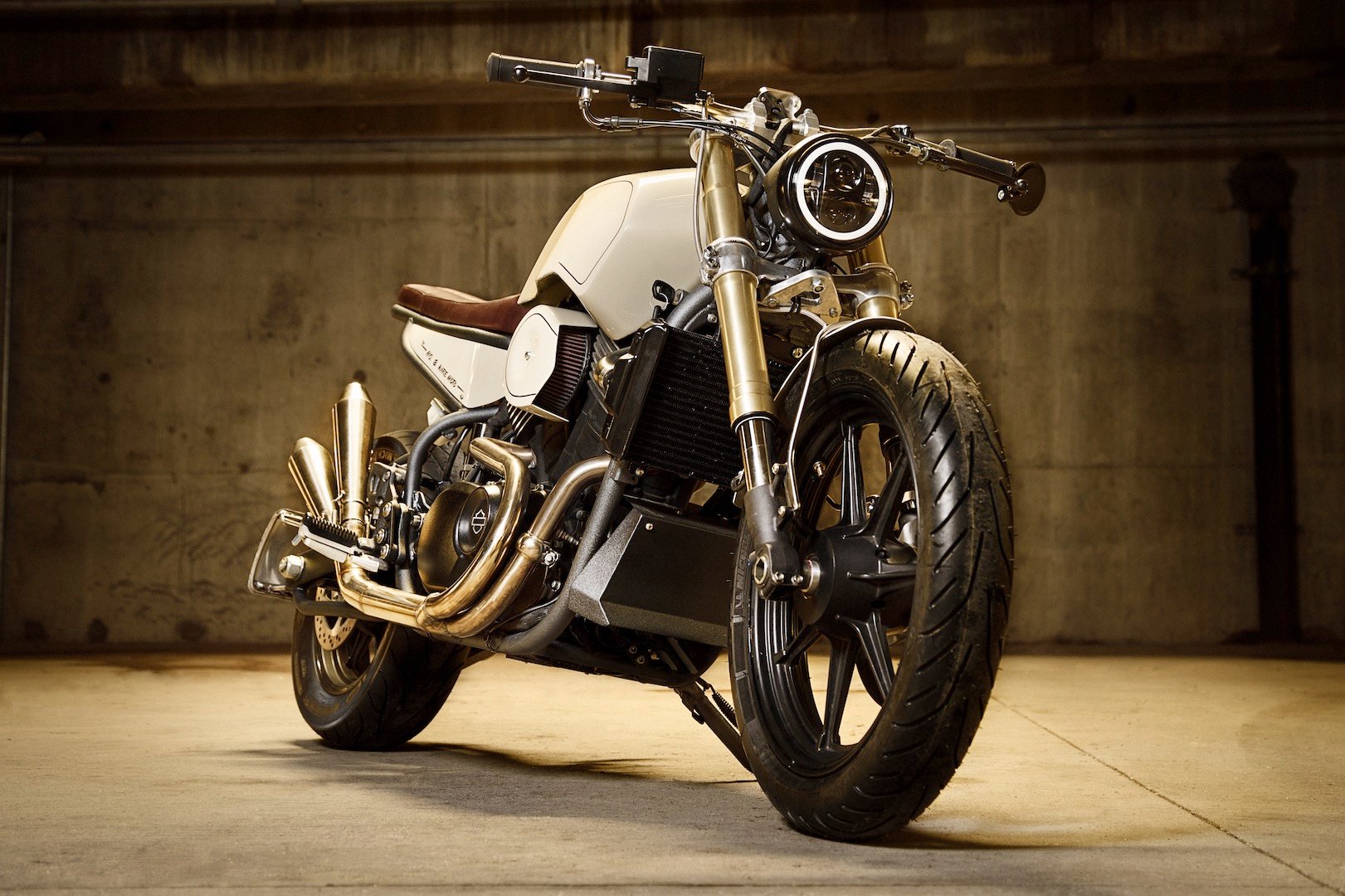 However, the Street 750 is not without its fair share of criticism, with a cramped riding position typically heading up that list. Those issues haven’t stopped it from being one of The Motor Company’s most popular models, and it often finds itself going under the knife in the workshops of custom builders around the globe.For many builders, the XG750 provides a solid, dependable, and easily obtainable canvas to impart their ideas onto. “I chose the XG750 as the platform for reliability, power, and ease of tuning,” Cornberg says. “The short stature of the client also made it a good fit.”Cornberg’s client had some reservations about using a 2015 Harley-Davidson Street XG750 as the basis for their build, but that is why he’s getting commissioned. Builders such as Cornberg see potential, not just what lays before them.The customer wanted a daily rider that could also be show-worthy, and it is—the No. 8 Wire Motorcycles Street XG750 has made appearances at The One Moto Show in Portland, Ore. and the Handbuilt Show in Austin.

With those directives in mind, Cornberg began the not-so-delicate work of stripping the Harley-Davidson Street 750 of its stock trimmings. Using only hand tools to form new parts, everything except the paint, powdercoating, and the upper triple clamp has been personally hand-made in his shop.The Street 750’s non-adjustable fork was tossed into the discard heap; in place of it went a Suzuki GSX-R750 fork. To make that dream a reality, Cornberg had to turn to machinist pal Michael Manhardt of Acuity Design in nearby Missoula. Manhardt machined a stellar aluminum upper triple clamp that allowed the Japanese sportbike’s fork to be paired to an urban American V-twin.That wasn’t the only aspect of the bike’s design that borrowed from the world of sportbikes—the rear suspension was given the same treatment as well. H-D’s dual shocks were replaced with a single-shock linkage system based on the Ducati 1098.With the help of the highly regarded Race Tech suspension shop in California’s Inland Empire, Cornberg equipped the Street 750 with a fully adjustable G3-S shock, complete with a remote reservoir. The suspension updates alone improve the comfort, as well as the handling, of the XG750 by a significant margin. 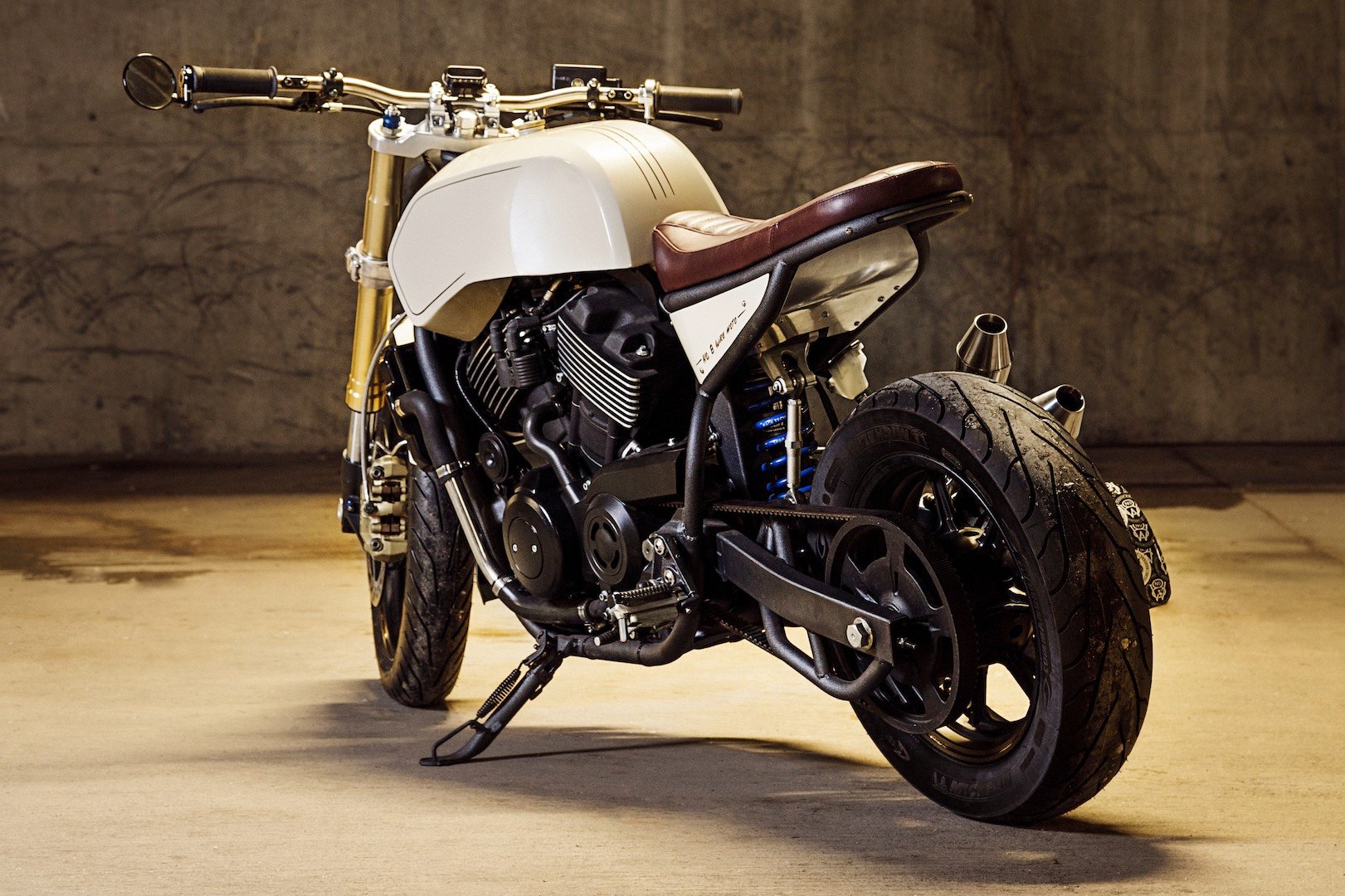 The rear subframe was lopped off, and a completely new one fabricated by using manual tubing benders. With space at a premium, the subframe plays a few different roles—housing the upper shock mount, the coolant tank, electronics tray, and taillights.Visually, the client wanted a stark departure from the Street 750. To accomplish that, the tank was heavily modified. The biggest challenge to overcome was retaining the oversized fuel pump while creating a sleek, fluid design.Over the course of a few attempts, a new gas tank was fashioned that gives the No. 8 Wire 750 a streamlined look, undoubtedly aided by the brilliant pinstriping. The fuel tank holds roughly three gallons, giving the motorcycle a decent range.Hammering and forming every accessory bit by hand was a common occurrence on this build. The front fender, side panels, and rear splash guard were all fashioned out of aluminum sheeting contorted into the perfect fit for his vision. 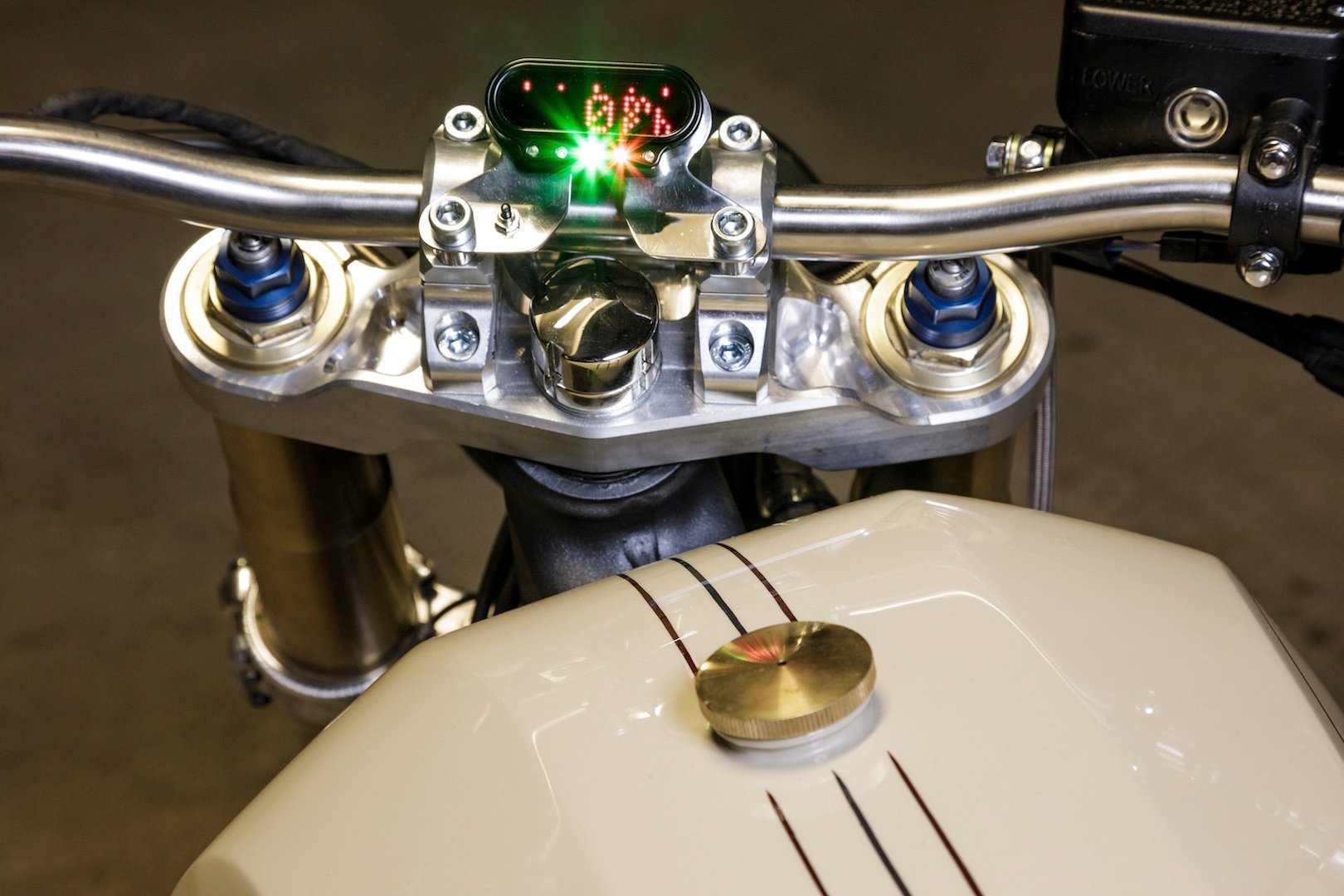 Given that this custom Street 750 is destined for the daily life, the motor seemed suited for the commuting cause already. Doing a deep dive on the V-twin just didn’t seem prudent when the client required something that would be a bit of an all-arounder.Still, that didn’t stop the wheels of progress from turning. Cornberg fashioned up a stainless steel, two-into-two exhaust system to help the liquid-cooled powerplant bark out a more menacing tune. To further their goals, a Vance & Hines air cleaner was bolted on. The external housing was, as you guessed, handmade by Cornberg.Helping settle the issue of the cramped riding position are some sturdy, wide handlebars, fashioned in-house, allowing the new owner of this machine to whip through traffic or tackle a short weekend jaunt with ease.Perhaps even more important is the revised seat height. A bone-stock Street 750 has a seat height below 26 inches, which typically garners plenty of praise from riders with shorter inseams. However, it does make for a cramped, clam-shelled ride when taller individuals take to the saddle. 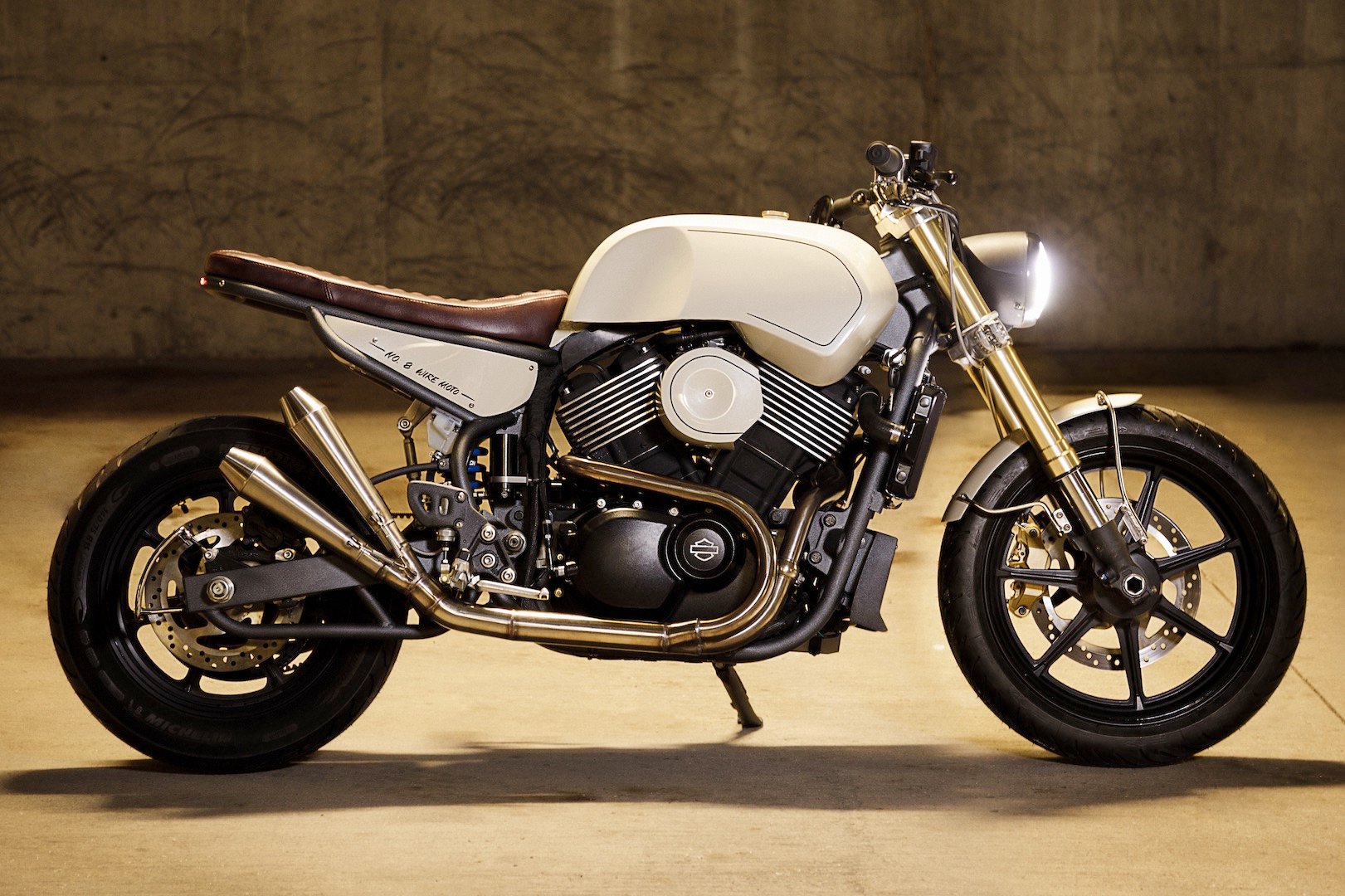 Bumping the seat height up to roughly 28 inches was a welcome change. And just like that, the wonky ergonomics of the stock Street 750 quickly became a thing of that past.At its core, the stock Harley-Davidson Street XG750 retains all of what any true-blue motorcyclist could ever hope for—it’s affordable and, largely, a competent machine. Above all else, the Street 750 is still a perfect platform to express whatever your mind can dream up, or whatever your wallet can spare.From the road to flat track and beyond, the XG750 has kept plenty of riders covered, and that’s the kind of freedom that H-D’s marketing team can take to the bank.For those who demand more, the No. 8 Wire Motorcycles Harley-Davidson Street XG750 delivers an improved ride, better handling, and appealing ergonomics. Did we mention that it is also stunning?Photography by Athena Lonsdale