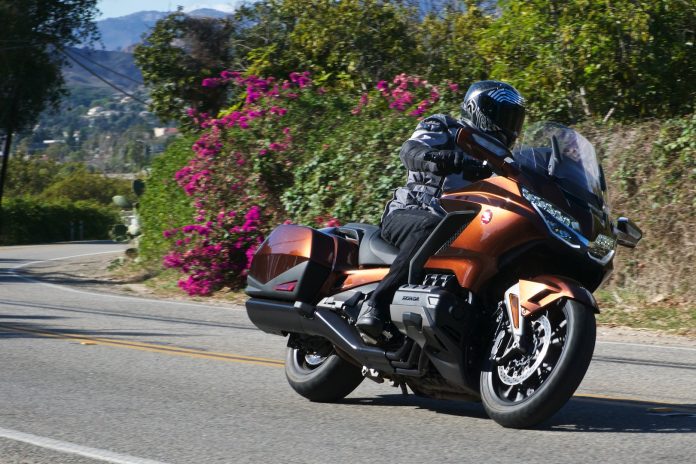 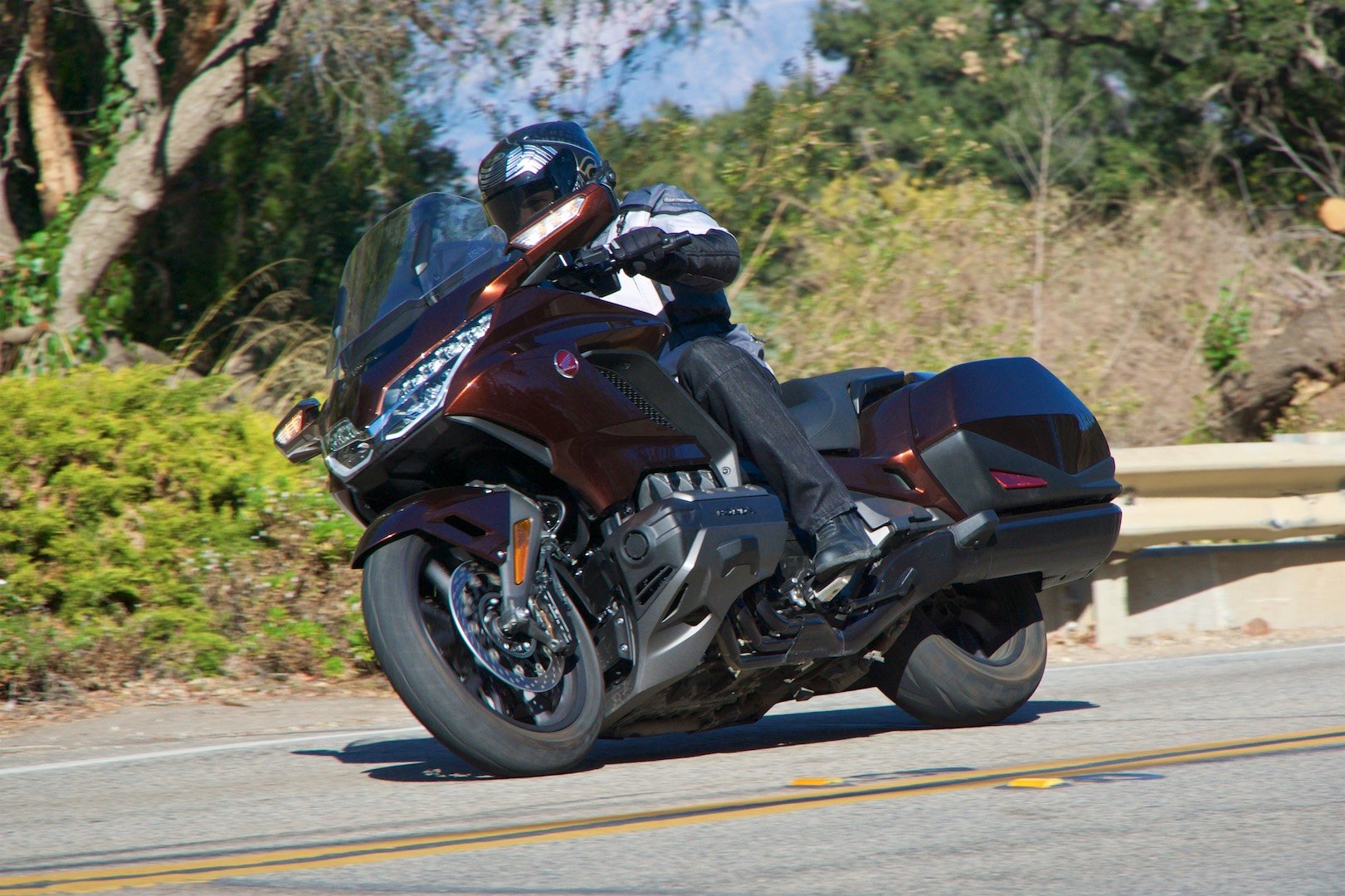 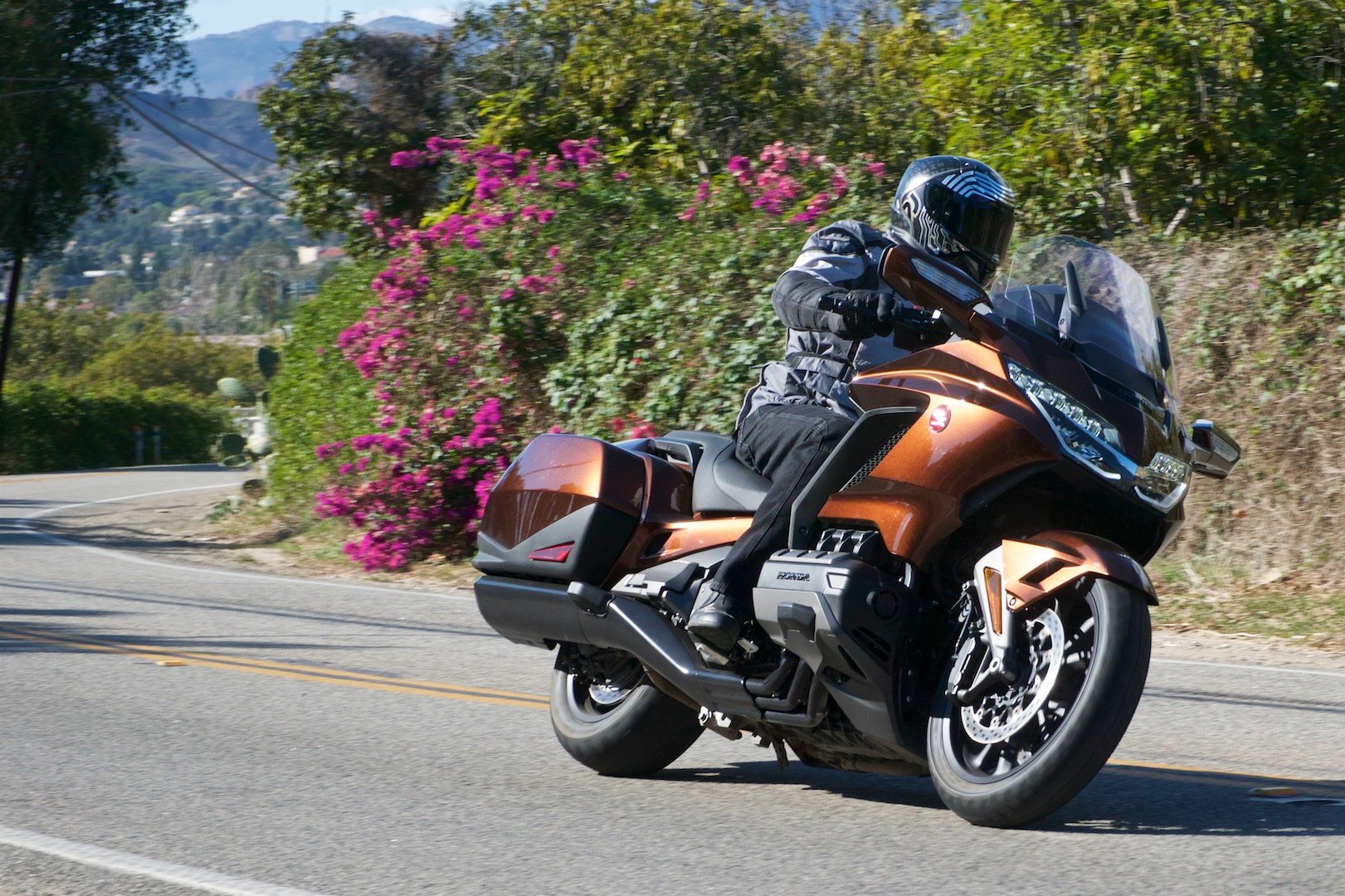 4. Yes, the Gold Wing is a huge motorcycle, yet it is completely comfortable in the twisties. Cornering clearance is generous, so feel free to ride aggressively. Amazingly, even with 30.5 degrees of rake, the Gold Wing doesn’t feel lazy in corners. Changing your line as needed requires some rider input, but it is doable when necessary. Generally, you will want to set a line and enjoy the stability.5. The Dunlop Sportmax D423 tires do everything you ask of them. Whether accelerating, braking, or cornering, they do their job without drawing attention to themselves—perfect team players.6. The Showa suspension lacks the electronic wizardry found on the GW Tour, but not the exceptional ride. The double-wishbone front suspension is flat out magic. It gives a great feel of the roads, while devouring poor pavement conditions without complaint. We are all used to traditional forks, yet this front end requires no break-in time for rider confidence—it feels just right immediately. The linkage-assisted shock does its job without giving the rider a reason to think about it. The only time you need to think about the shock is when manually adjusting the preload for a passenger and/or luggage.7. High-speed stability is crucial for a luxury tourer, and the 2018 Honda Gold Wing is steady as she goes. Nothing fazes the Gold Wing at speed. You can be barreling down a narrow two-lane road and have a semi doing the same. When you cross paths with the semi, you will feel the blast of wind that comes with a 150 mph closing speed with a huge vehicle pushing air, yet the Gold Wing itself is fully unperturbed. As fast as you’re willing to go, the Gold Wing is comfortable taking you there. 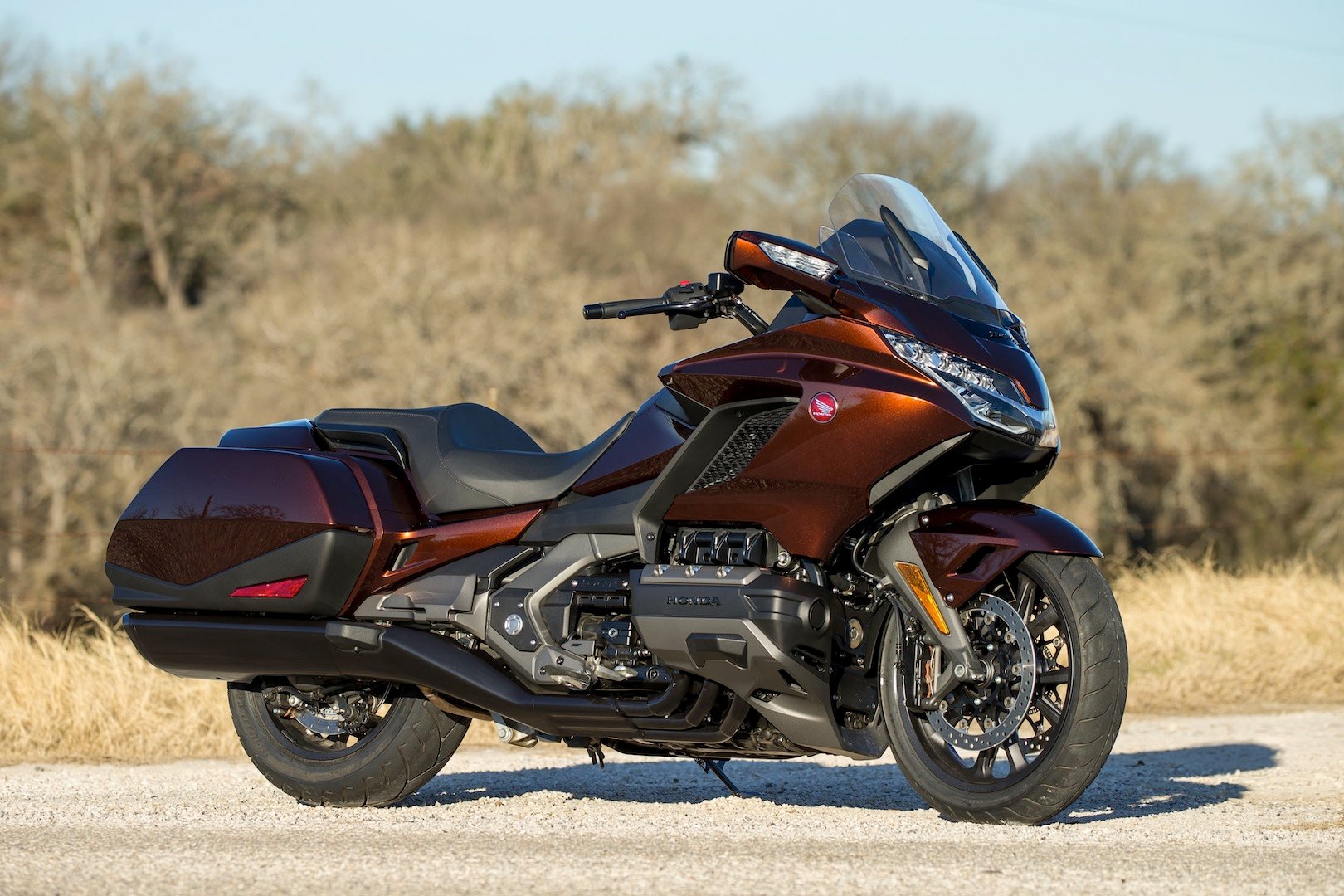 8. If you need to slow down, either predictably or unexpectedly, the fantastic electronically controlled braking system is your friend. The linked front-and-rear braking operates in a fully transparent way, including the ABS. The 320mm front discs with six-piston Nissin calipers and the 316mm rear disc work in concert like a grand master pianist. They slow you down as a team, and the wheels talk to each other when implementing the ABS. No, you don’t get the automatically adjusted combined ABS system found on the Gold Wing Tour motorcycles, but this system is exceptional in every way. It is a great safety feature.9. Featuring an all-new 24-valve 1833cc motor, the Gold Wing has more than enough power for any touring job at hand. Acceleration is strong in any gear, and there is decent overrev. Power is absolutely linear and predictable from idle to redline, making for a purely enjoyable ride that allows for upping the pace should you consider it necessary.10. While we are huge fans of Honda’s fully automatic seven-speed Dual Clutch Transmission, there is absolutely nothing wrong with the fully manual six-speed. We felt like we would miss the fully automatic DCT, and perhaps we did now and then. However, the new six-speed manual tranny is flawless. Shifting is intuitive and error-free, though it does require more input than a DCT. A bigger loss is the Walking Mode, which includes reverse, in parking lots. You save 13 pounds and $1200 by going with the standard six-speed. Still, as great as the manual transmission is, we would spring for the Gold Wing DCT. The manual is there for those who simply cannot tolerate an automatic—most of those people haven’t ridden with the DCT. 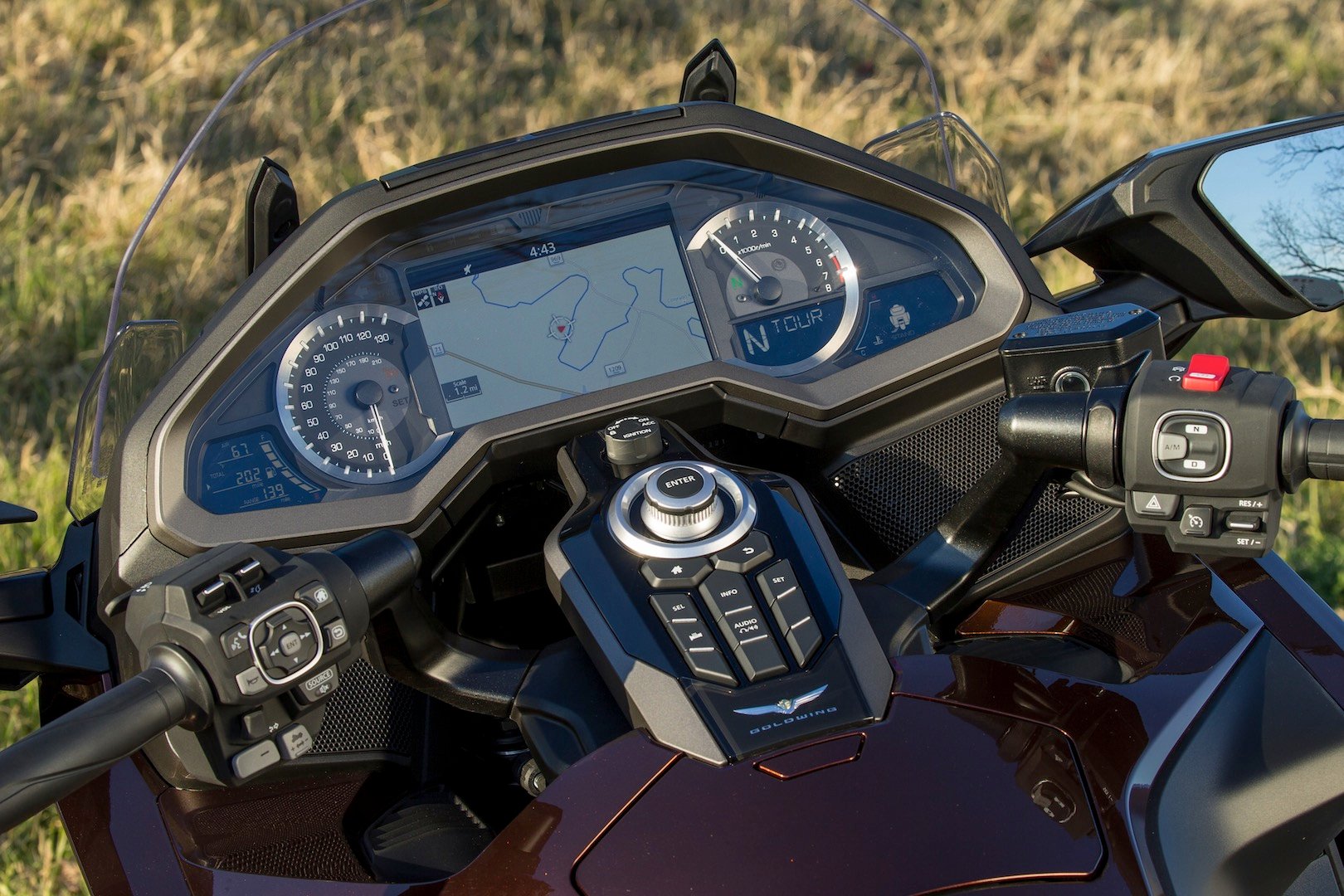 11. The 2018 Honda Gold Wing’s shorter windscreen has good protection, though it does deter 1000-mile days. The good news is that the Gold Wing’s windscreen is electronically adjustable, and if you want a taller windscreen, Honda will sell you one or point you to the Gold Wing Tour.12. Ergonomics are the only thing that might give you pause when considering a Gold Wing. Naturally, the Gold Wing is supremely comfortable when you are touring on it, as well as when you are riding with some abandon. The only downside is that the riding triangle—grips, pegs, and seat—are fixed. With other bikes, you can move your feet around. The Gold Wing’s footpegs leave little room for readjustments when putting on serious miles, and the configuration of the motor will make accessory footrests a challenge. You will definitely want to stop after putting in 200 miles and emptying the 5.5-gallon fuel tank.13. There are countless buttons and switches that are perfectly arrayed. The controls you need most are quickly accessible, with less frequently activated features residing on the tank. Everything works as expected.

14. Apple’s CarPlay is a huge step forward for user interface with the motorcycle. Although CarPlay still isn’t as good as an iPhone, it works better than any other motorcycle dash. The seven-inch TFT display is a joy to gaze upon. Plus, there is a Home Link System option that does things such as opening and closing your garage door for you.15. If you like most of the functionality of the Gold Wing Tour and don’t need the trunk or a few other features, the standard Gold Wing is a perfect buy. We instantly fell in love with the Gold Wing Tour, and the 2018 Honda Gold Wing reignites that passion. It is a phenomenal machine, and the bagger version of the dresser loses little in the translation, and adds a bit of performance to the equation.Action photography by Don Williams
Still photography by Kevin WingRIDING STYLE