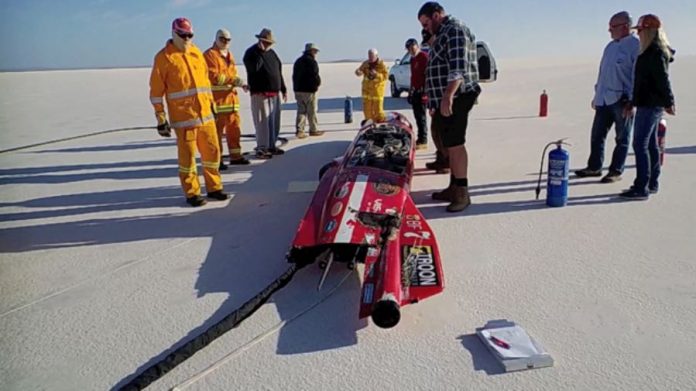 When eight-time land-speed record holder Valerie Thompson headed down under to Australia’s Lake Garidner DRLA Speed Week, she had one goal in mind – claim the world’s fastest motorcycle title.The Arizona resident, known as the “Queen of Speed,” didn’t achieve the world’s fastest motorcycle title aboard the Team “7” Streamliner designed by Denis Maning and John Jans.But she did claim a new land-speed record of 328.467, becoming the first female to exceed 300 mph in Australia and earning “Fast Lady on the Lake” award.The March 17-19 event didn’t come without drama, though. During a run on the dry lake bed in South Australia, Thompson crashed at over 340 mph, the nerve-jarring scene captured on the video below.According to Federation Internationale de Motocyclisme (FIM) reports and team video, Thompson had just passed the four-mile marker on a 12-mile course when the rear of her streamliner rose off the racing surface, sending the vehicle airborne at 343.7 mph. Parachutes slowed the vehicle as it flipped and rolled multiple times, scattering wreckage for more than a mile across the Lake Gairdner salt flats.Thompson walked away with minor bruises and lacerations, and will continue her quest for new land speed records.“We had a singular goal of running 377+ mph to capture the record during the World Speed Trials,” Valerie Thompson. “We used Speed Week to test and tune the bike and I’m happy we set a new record and received the ‘Fast Lady on the Lake Award.’ The wreck during the World Speed Trials was unfortunate, but we are not giving up on our quest for the new record.”“Most importantly, we proved the superiority of the moncoque carbon fiber design and safety features utilized by Denis Manning and John Jans. Without their dedication to high speed safety engineering, I would not be talking with you now.“Nobody has ever walked away from a 340+ mph crash on a motorcycle. I’d also like to thank the DLRA and all their race course workers who helped ensure my safety.” AMA Hall of Fame member and streamliner designer Manning also commented: “We’ve not determined what caused the problem, but we’ll know more once we analyze the onboard data collection systems and review films in more detail.“Valerie did an incredible riding job, doing everything she was supposed to and more. All of us at Team “7” Racing are relieved Valerie did not sustain any life threatening injuries.”During the Speed Week competition, Thompson earned her membership March 15 earning in the Dry Lake Racers Australia 200 and 300 MPH Clubs. She is only the second competitor to gain membership in the DRLA 300 MPH Club and was honored with the “Fast Lady on the Lake” award.Thompson is an eight-time land speed record holder on a variety of bikes ranging from Harley-Davidsons to BMWs and streamliners. She is a member of seven-land speed racing 200 MPH Clubs, one 300 MPH Club and the first female to exceed 300 mph in Australia.For more, visit Valerie Thompson Racing.