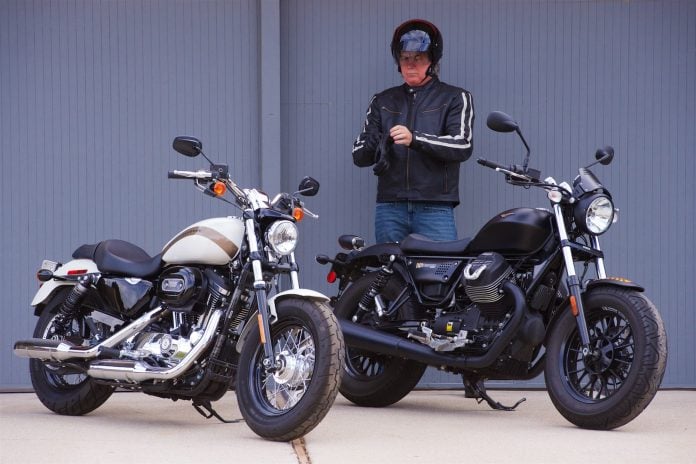 Leave it to two iconic companies with a combined experience of over 200 years to produce a pair of fine retro motorcycles that are as functional as they are alluring. The Moto Guzzi V9 Bobber recalls performance-oriented customization that began in the 1930s, while the Harley-Davidson Sportster 1200 Custom sustains its own history dating back to 1957. Now, it would be easy for you to simply select the motorcycle that best fits your desired persona, but we’re hoping you are going to be interested in finding out which of these two bikes actually suits your intended implementation.

While the venerable Sportster 1200 Custom and all-new V9 Bobber may seem like an odd couple, they both trade in nostalgia with a nod toward performance, run torquey air-cooled V-twin motors, share wheel sizes, and have prices that sit in the $10k range. That was enough for us to put them nose-to-nose to find out what makes them tick, and compare their strengths and weaknesses.The Moto Guzzi V9 Bobber is a fresh bike for 2017, with a new motor that is more than simply a bored and stroked V7 powerplant. Focus was put on giving the V9 a virtually flat torque curve, with the peak coming unusually early at 3000 rpm. The raw power production numbers aren’t impressive, but the real-world seat performance is what matters.We are well acquainted with the Harley-Davidson Sportster 1200 Custom and its Evolution motor. The pushrod design and 45-degree V-twin powerplant is a classic, and the XL1200C designation dates back over 20 years.Ergonomics matter, and although the Sportster self-identifies as a Custom, it has a fairly neutral seating position with its mid-mount footpegs and conservative buckhorn style handlebars. In comparison, the taller Bobber has wide flat-bend bars on risers that give it a seating position that seems almost supermoto-like compared to the comfortably casual sporting feel of the Sportster.

Check out the body positioning in the photos—I stand about 5’ 10”. My arms bend more on the Sportster, while my knees have a tighter kink on the Bobber. The Sportster puts you in a bucket seat for two, while the Bobber goes with a flat solo perch. These are clearly two different ergonomic approaches, and you can easily tell which bike you are on with your eyes shut.If canyon riding at faster than a casual pace is your primary activity, the Moto Guzzi V9 Bobber will be your mount of choice. Although the larger-displacement Harley-Davidson Sportster 1200 Custom has an unquestionable power advantage, the Bobber dominates in two crucial categories—it weighs about 150 pounds less and has far more cornering clearance.The Bobber’s relatively light weight and the V9’s overrev help erase the power differential, so the ability to hang it out in a turn without instantly dragging the peg feelers is a huge advantage. Sure, you can touch metal to asphalt on the Bobber, but you will be leaned much farther over when that happens.The two motorcycles have decidedly different approaches to corners, with some similarities. They have the same fat tires, so it’s a wash between the Continental and Michelin 16-inchers. Both have a big footprint that has a bit of a vague feel, but strongly resists pushing. Confidence is good on either motorcycle. 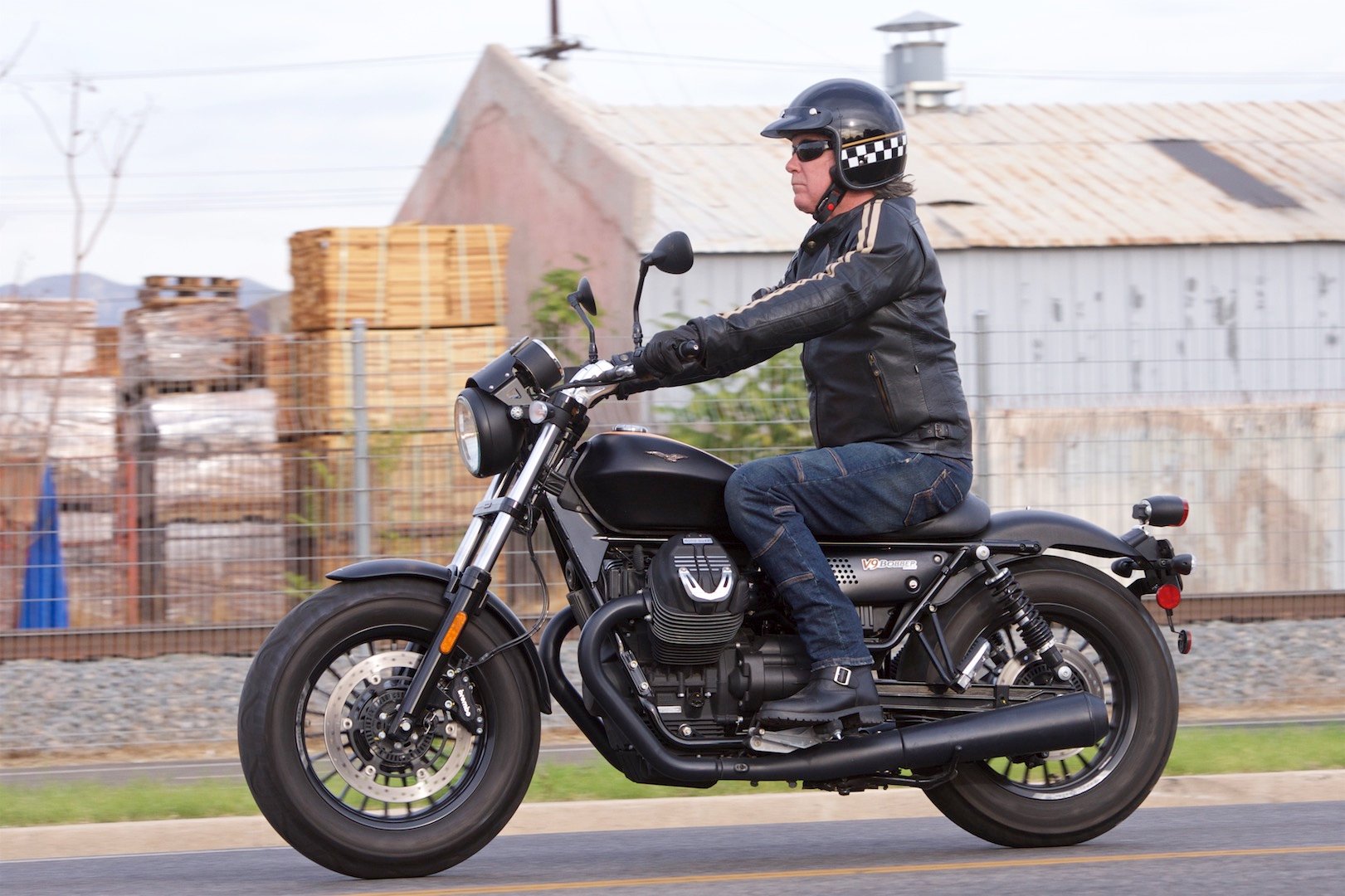 Running the Sportster though the corner is simple—plan ahead and just lean into it. With 30 degrees of rake and a wheelbase over five feet, the 1200 Custom isn’t going to change direction on a whim. So, set your path with care and ride it like you’re aboard a locomotive. Great torque will pull you out on the exit and send you on your way with authority, if not breakneck speed.Those wide handlebars on the V9 Bobber are the secret to setting up for corners. Use the leverage to chart your course. The wide front tire keeps the Bobber from being twitchy, yet you can change your line with aggressive bar input. The fact that the Bobber is so much lighter and has a steeper rake (a neutral 26.4 degrees) and shorter wheelbase (by two inches) than the Sportster has predictable consequences—the Bobber is more maneuverable, even if it falls short of agile.Both motorcycles will prefer that you pick nicely paved roads, or stick to the smoothest line through a corner that you can find on a poor-condition road. The Moto Guzzi has an edge over the short-travel Harley-Davidson, to be sure, though the difference isn’t as pronounced as you might expect. The high-profile tires do help absorb irregularities, but they inherently lack damping, so they are no substitute for higher quality suspension.The brakes are certainly adequate on both machines, with the front and rear discs being helpful in slowing the bikes down. Feel is good at both ends, and engine compression braking is a nicely organic part of the braking process.

ABS is available for the Sportster 1200 Custom, but at a hefty $795 premium—pretty high for 2018. If you outfit the Sportster with ABS, all of a sudden it is over $1300 more expensive than the V9—a significant number for some buyers.Riding in the dry, we never tapped into the ABS except to intentionally test it. The Moto Guzzi’s ABS is smoother, though both work fine. The tires get good traction, so the ABS is more important if you ride in the wet than if you keep it parked when it’s raining.So, if you’re a canyon disciple and you like riding hard, you will certainly find the Moto Guzzi V9 Bobber more to your liking. Less aggressive riders who aren’t put off by frequent peg-feeler scrapes will be satisfied with the otherwise assured stance of the Harley-Davidson Sportster 1200 Custom.Getting back into town on the freeway reveals two different experiences. The Bobber is better at handling the rough expansion joints that you find in the Los Angeles metropolitan area—no question about that.While the Sportster 1200 has more power, you can only confidently access that on a smooth highway. Otherwise, the short travel suspension will bounce you around and get you back in the range of legal speeds. The V9 benefits from a sixth cog—the Harley-Davidson transmission is a five-speed—and it’s definitely an overdrive. Still, fifth is plenty high on the Sportster, and transmission ratios are perfectly suiting to the power output.The Sportster’s seating position makes you feel pushed back by the wind at high speed, so you feel the need to hold on a bit tighter. It is easier to lean into the wind on the Bobber, and that makes it less fatiguing to ride any sort of distance without feeling worn out by the experience. 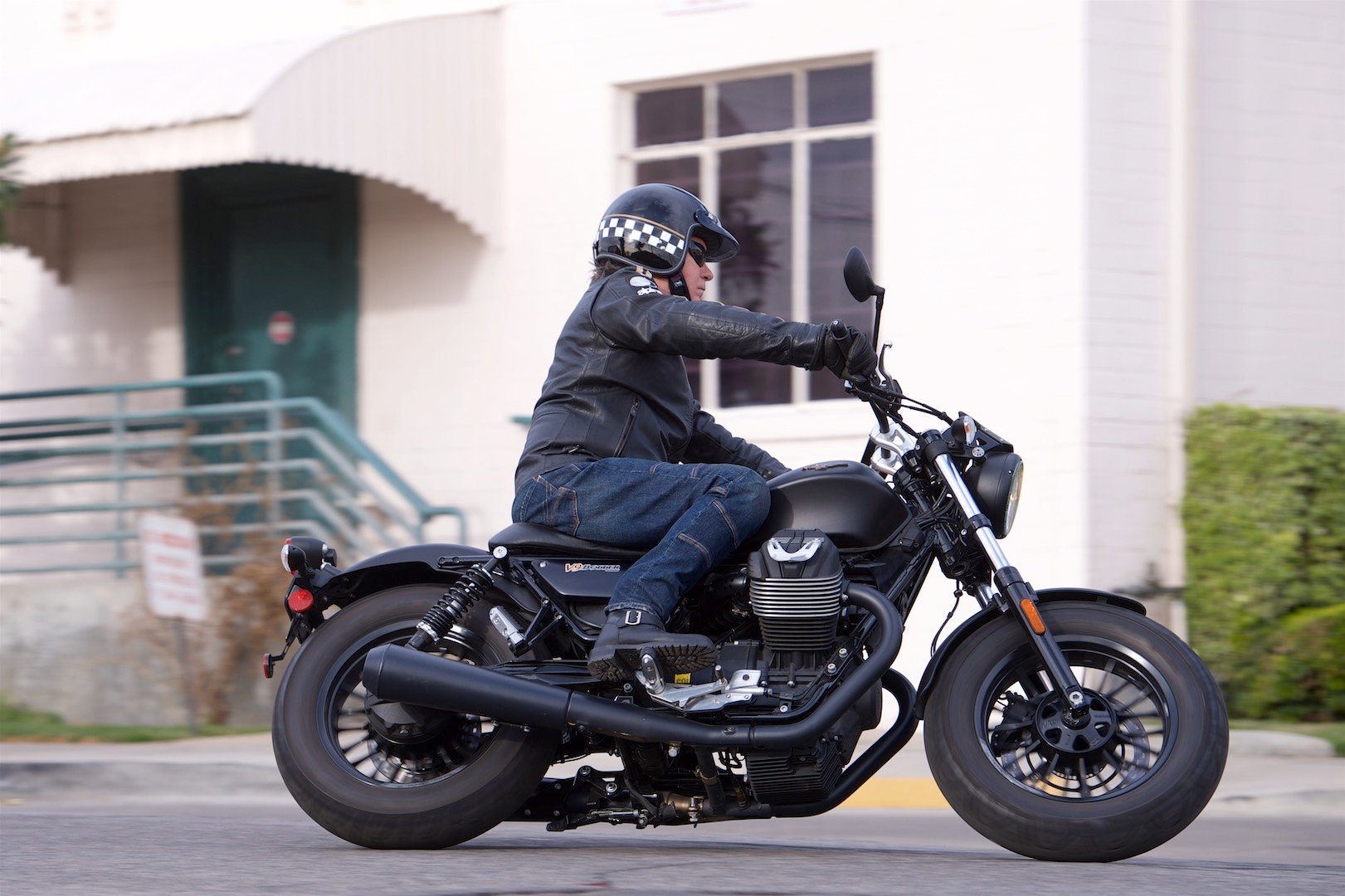 Long rides are possible on backroads and in town for two reasons—the Bobber and the Sportster are comfortable, plus their tanks hold at least four gallons of high test. There are fun motorcycles to ride, and you won’t be forced to take frequent breaks.In an urban environment, you have two distinctly different approaches. The Harley-Davidson has the power to leave stoplights with authority, the low seat makes it confidence-inspiring for all skill levels, and the narrow handlebar/rearview-mirror combo are great for sneaking though dense traffic.On the Bobber, it’s about a taller view where you can see over cars better than on the Sportster. Wide bars can be a liability in traffic, but the Moto Guzzi is maneuverable enough that you can work around them, and the high mirrors—just be careful.The V9’s six-speed gearing is a bit high—even first gear. That can lead to cooking the clutch during long bouts with traffic—something we did multiple times. The V9’s clutch continued to operate as expected, but it was putting out a smelly distress signal. 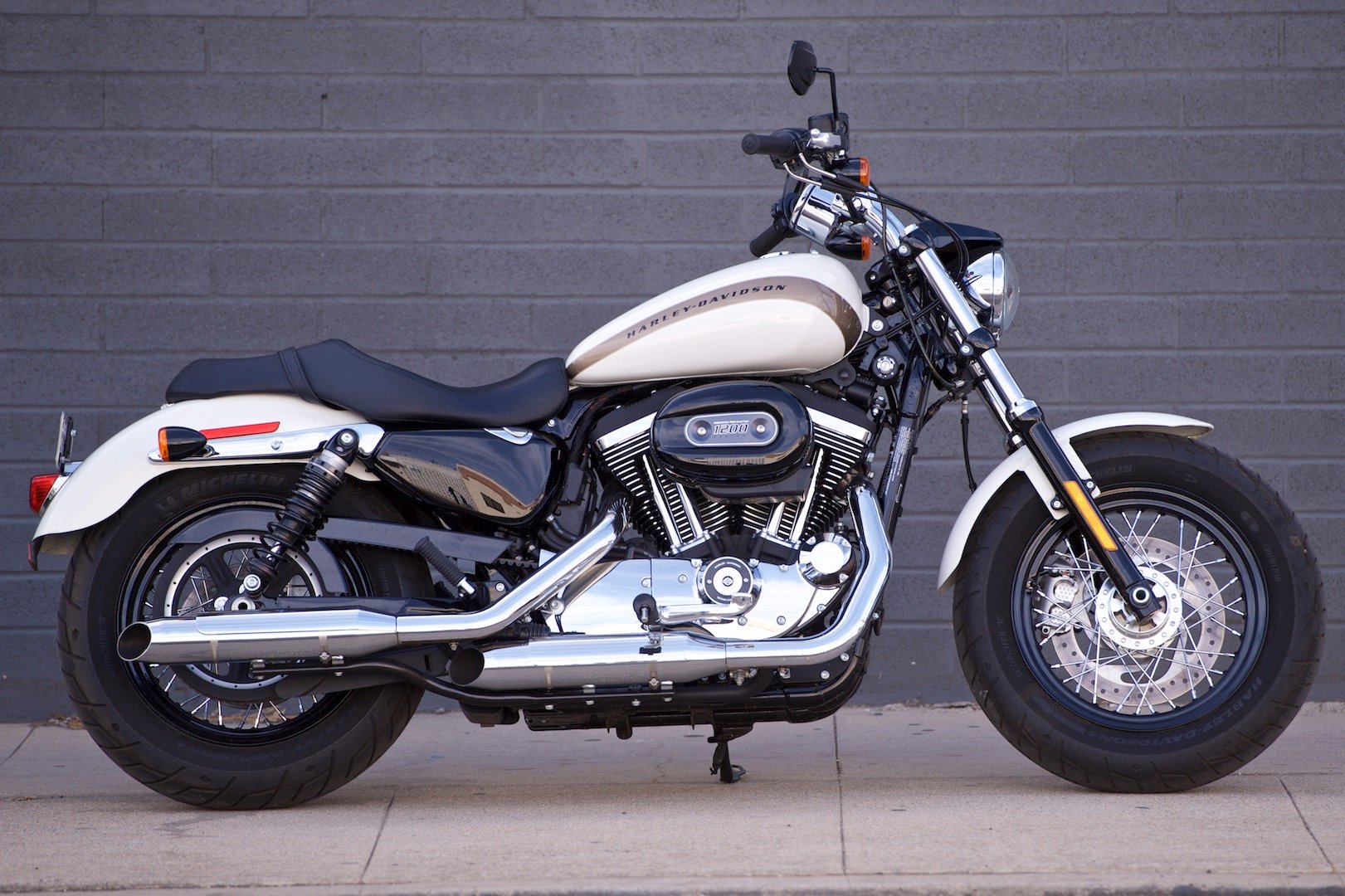 Given the Sportster’s massive torque advantage, you might expect it to run away from the V9. From a practical standpoint, it doesn’t work that way. The V9 revs more freely, and there is that inescapable weight advantage. Yes, the 1200 accelerates with more authority, but not decisively faster. Regardless, both engines are fun to use in urban environments.Stiffly tuned suspension on both motorcycles ensures a bumpy ride on the rugged roads of Los Angeles. Fortunately, while you will feel the incongruities, the edge is taken off by the suspension components on both bikes with well-matched springing and damping, plus the rotund tires. Although you won’t be enjoying a smooth ride, you will not be beaten to death or jostled by either motorcycle.In most cases, a Harley-Davidson will be the attention grabber on the road. However, in this case, the Sportster 1200 Custom is a relative wallflower. The Moto Guzzi V9 Bobber has unquestionable charisma, and it does not go unnoticed. At a stoplight in South LA, with Associate Editor Kelly Callan aboard, a woman rolled down her window to enthusiastically proclaim to Kelly, “I love your bike!” The Custom never elicited that sort of response.On the flipside, the Harley-Davidson V-twin’s dual staggered mufflers have a much more authoritative sound than the comparatively whisper quiet Moto Guzzi V-twin’s long exhausts. Similarly, the Sportster offers a sense of excitement at startup, while the V9 purrs its way to life.Moto Guzzi gives the less-expensive V9 Bobber an advantage in electronics over the Harley-Davidson Sportster 1200 Custom. Starting with the dash, the Bobber has more information at your fingertips, including gear position (a staff favorite) and one that I particularly like—ambient temperature. 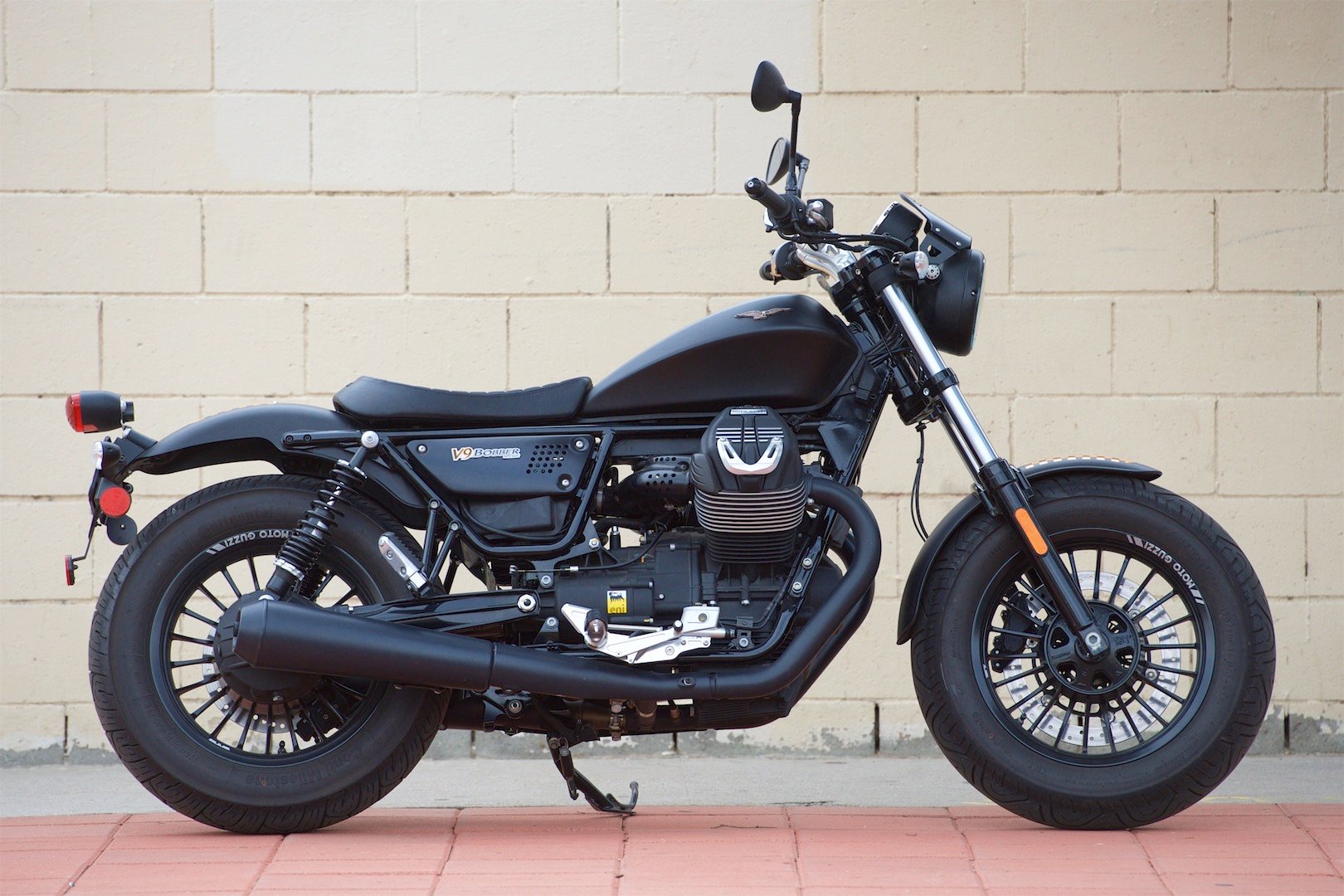 You have two-level (plus off) traction control on the V9 Bobber. The TC has a designated button on the left handlebar for easy switching, just put it on level 1 and forget about it; go to level 2 if it’s raining. Though the Sportster does without traction control, the tractable engine never felt like it needed it. Still, if it’s a rainy day on a slick road, traction control and ABS are good things to have in your pocket.The reality of the Harley-Davidson Sportster 1200 Custom and Moto Guzzi V9 Bobber is that most buyers will make purchasing decisions based on looks—that’s the nature of lifestyle motorcycles like these.However, when you are perusing the showroom floors, know that the V9 Bobber is more versatile of the two with a decidedly sporting advantage on back roads, while the Sportster 1200 Custom has urban street credibility and performance that is tough to beat.Photography by Kelly CallanRIDING STYLE – Harley-DavidsonRIDING STYLE – Moto Guzzi