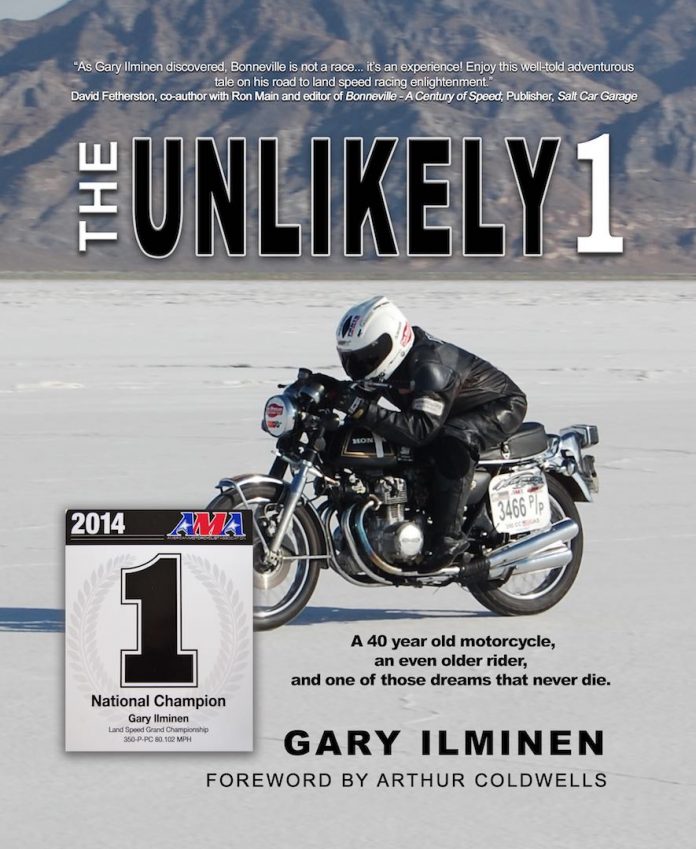 The proverbial tables have turned. For a change, I’m contributing to our Rider’s Library rather than our typical man behind the keys, Gary Ilminen. And for good reason; I get to review Ilminen’s new book that creates a Mark Twain adventure out of land-speed record motorcycle racing in “The Unlikely 1.”But instead of the Mississippi River, we have some quicker journeys down the white sands of the iconic Bonneville Salt Flats. “The Unlikely 1” is an energetic read that tells the story of Ilminen’s four trips to the Salt Flats.He first competed on a Honda V30 Magna, then a 1974 Honda CB350F (read about the CB350F Rebuild), which continues to hold the Land Speed Grand Championship Record that Ilminen claimed in 2014 (350-P-PPC, 80.102 mph). 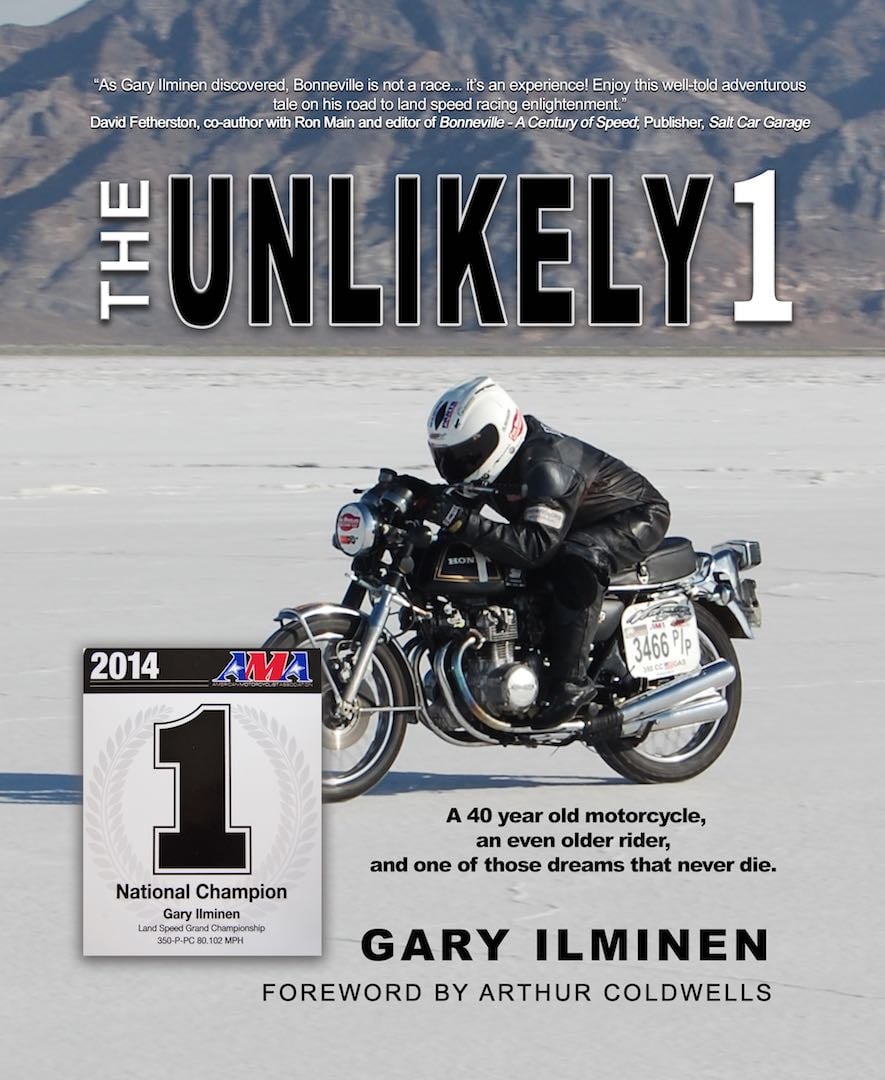 Though I never personally met Gary, I’ve worked with him for practically a decade. He’s known for his deep takes on technical matters, and always finds an entertaining way of explaining things.This is evident throughout “The Unlikely 1,” which features a foreword by Ultimate Motorcycling President Arthur Coldwells, and blurbs by some of the motorcycle industries most beloved personalities, including Peter Egan and Aerostich founder Andy Goldfine.Ilminen, of Lone Rock, Wis., takes us on his journey to the Bonneville Salt Flats through the perspective of the everyday man-not a sponsored racer or CEO moonlighting on race motorcycles. We get entertaining tales from prepping a 40-year old motorcycle to taking the 3000-mile journey not once, but twice, to the Salt Flats with a small trailer donning 9-inch wheels.Many sentences strike some serious emotions only found at Bonneville: “I may have been a little too conservative on the roll-up of the throttle, and I also quickly realized how big the impact of Bonneville’s thin air, high altitude location is on a bike with carburetors.”And, a few sentences later about waiting in the line: “The wait was long-so long in fact that Jacci (Gary’s wife) amazed the Motorcycle Performance guys by knitting two complete pairs of socks while we crept along in line waiting for my next run.” 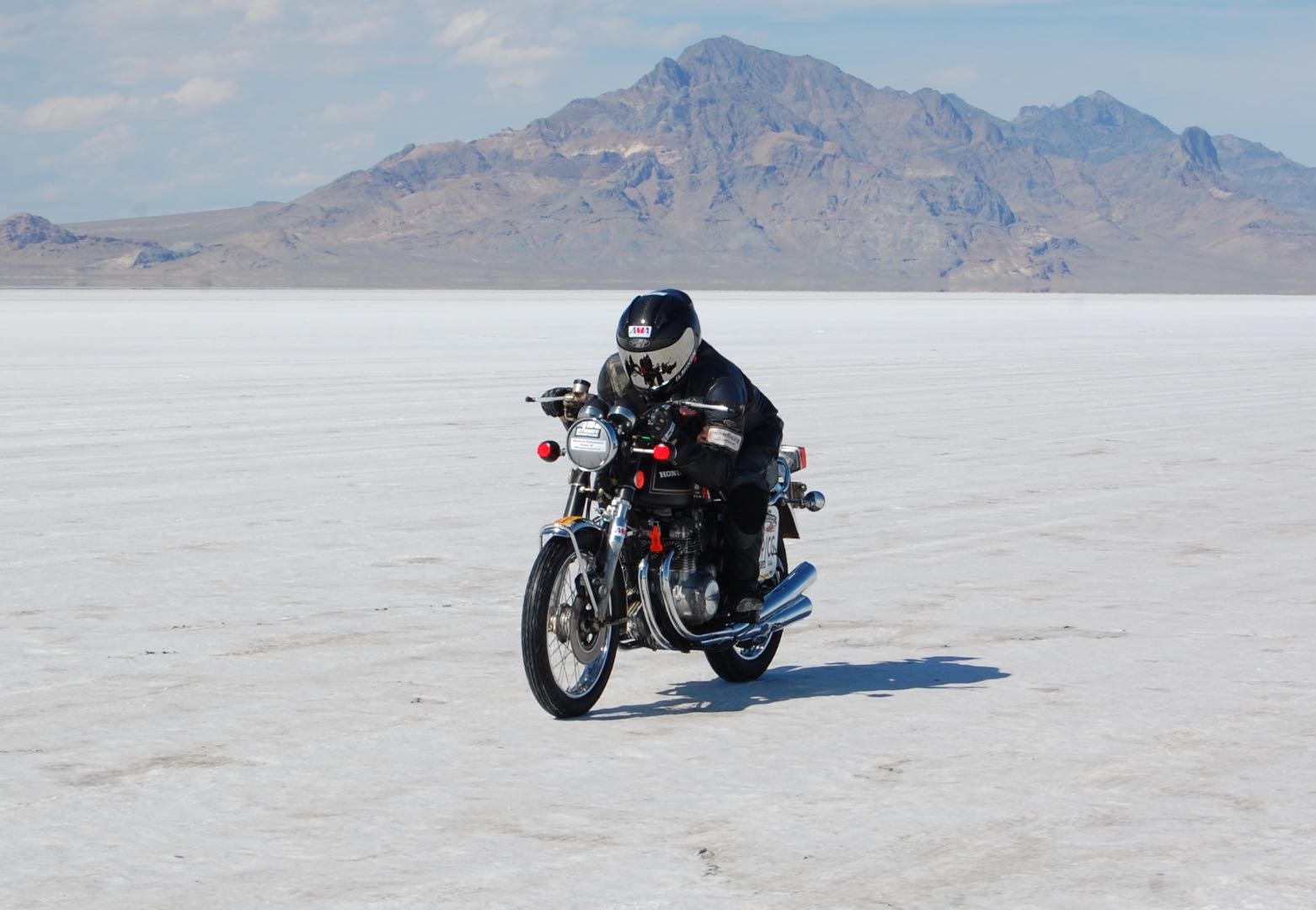 This type of crafty sentence rhythm runs throughout as you learn about Ilminen’s struggles and achievements on the salt, and a thorough history of racing at Bonneville, which was renamed the Bonneville Motorcycle Speed Trials in 2014.“The Unlikey 1” is part motorcycle-racing history and part memoir, and a must read for any type of motorcycle enthusiast – not just the race fan. This book does what all good books do – makes you want to take action.For the past few years I’ve had some urge to get to Bonneville, and now it’s time to take execute a plan, and maybe go for a Land Speed Grand Championship record. That’s one cool accomplishment. Thanks for the great read, Gary; hopefully I’ll see you on the salts in 2018!“The Unlikely 1” is available at Touch Point Press.