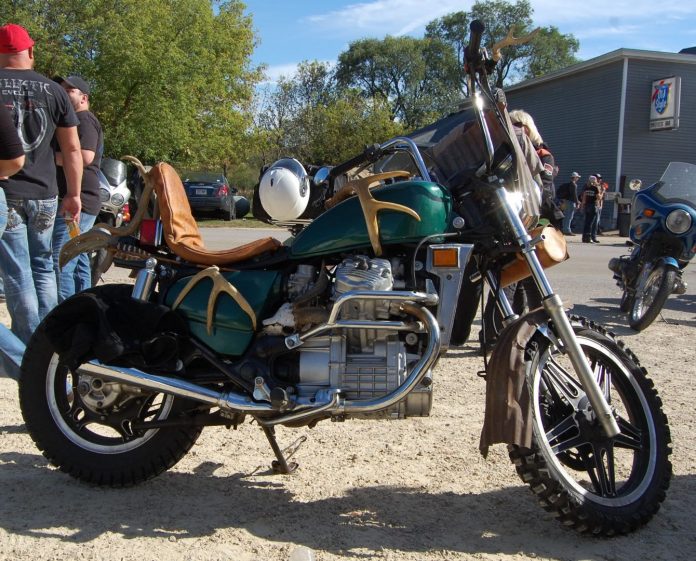 The twice-yearly Slimey Crud Motorcycle Gang Café Racer Run is the event that signals the beginning and the beginning of the end of the riding season in the Upper Midwest—and it always gives the season a heckuva send-off.This year’s fall run is no exception. Here at Ultimate Motorcycling, we always try to share some of what we arbitrarily and capriciously deem the top sights at the run with our readers.Following are the top sights we say this year at the Fall 2017 Slimey Crud Motorcycle Gang Café Racer Run. 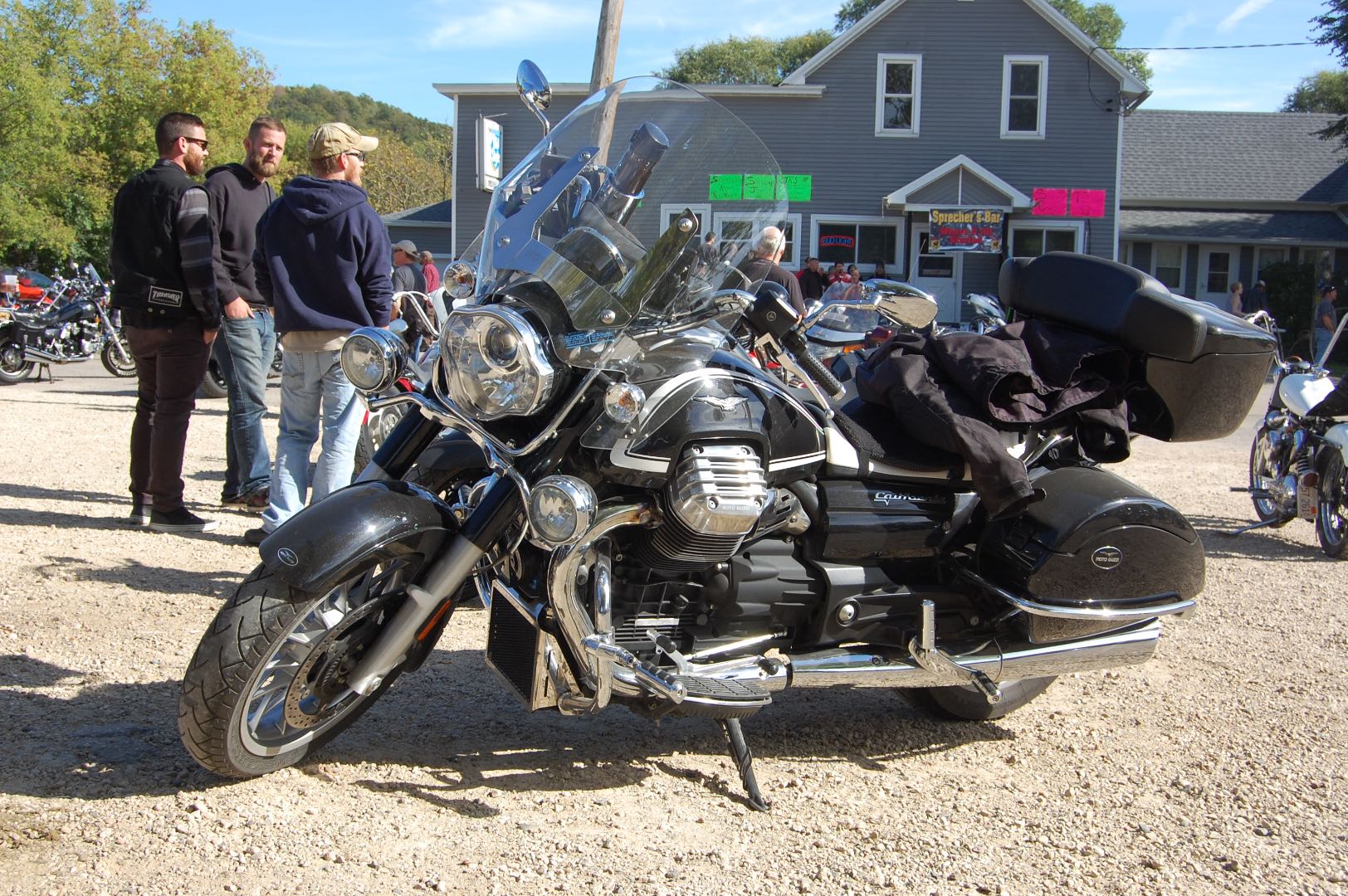 1. Top V-twin Tour: This immaculate Moto Guzzi California gets our vote as the top V-twin tour bike in its striking white-on-black livery, tall windshield, huge saddlebags and gargantuan trunk that looked big enough for my Honda to fit inside. 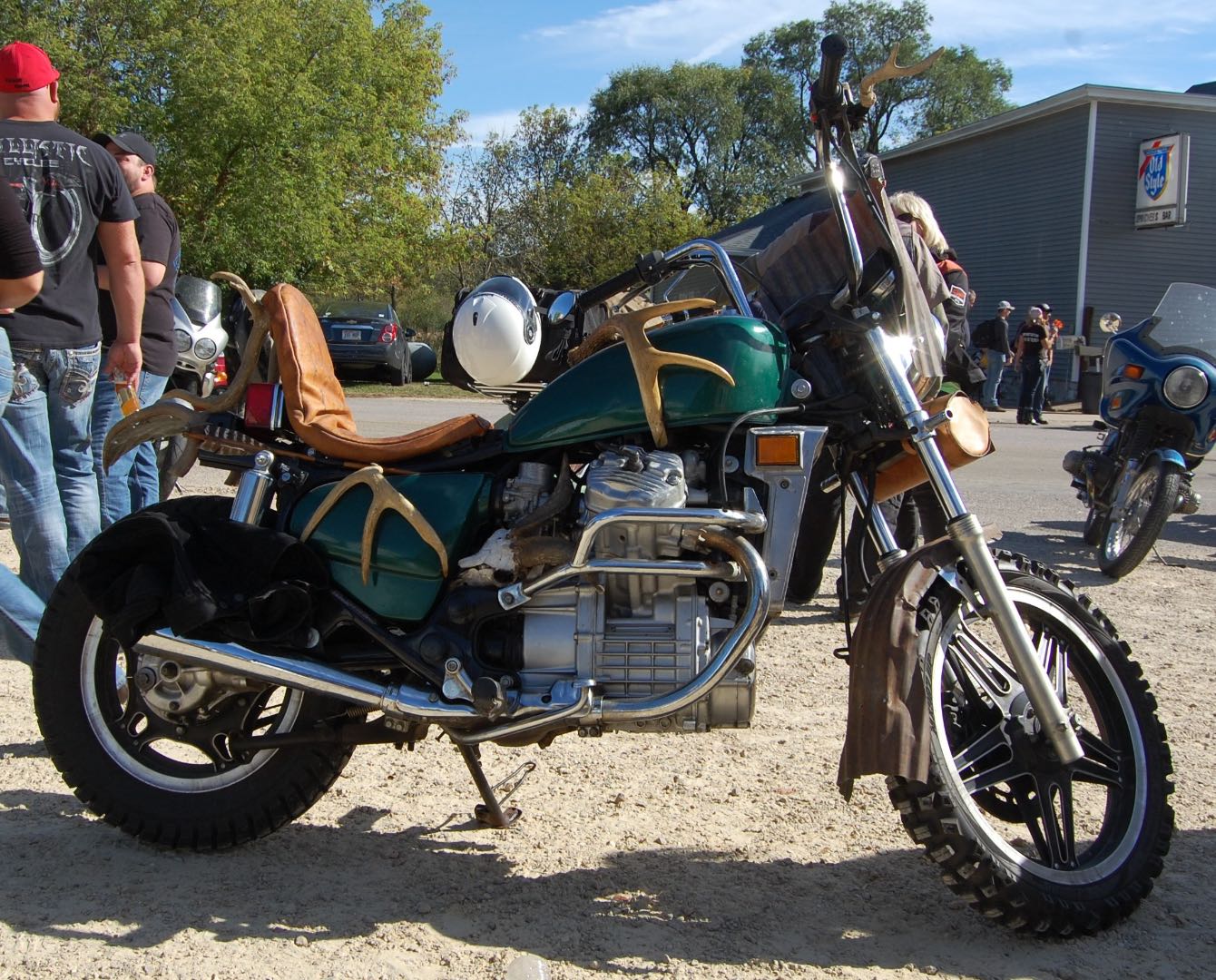 2. Top Anti-custom Custom: OK, this Honda CX500 may not have all the bells and whistles of a lot of so-called customs, but it makes a statement. Indeed, this CX is so counter-culture in the world of custom building with its knobby tires, funky high-back solo seat, mellow green paint and buck horns. Yes, you’re right—the bars are ape hangers, but this bike’s buck horn design cues gives new meaning to the term. 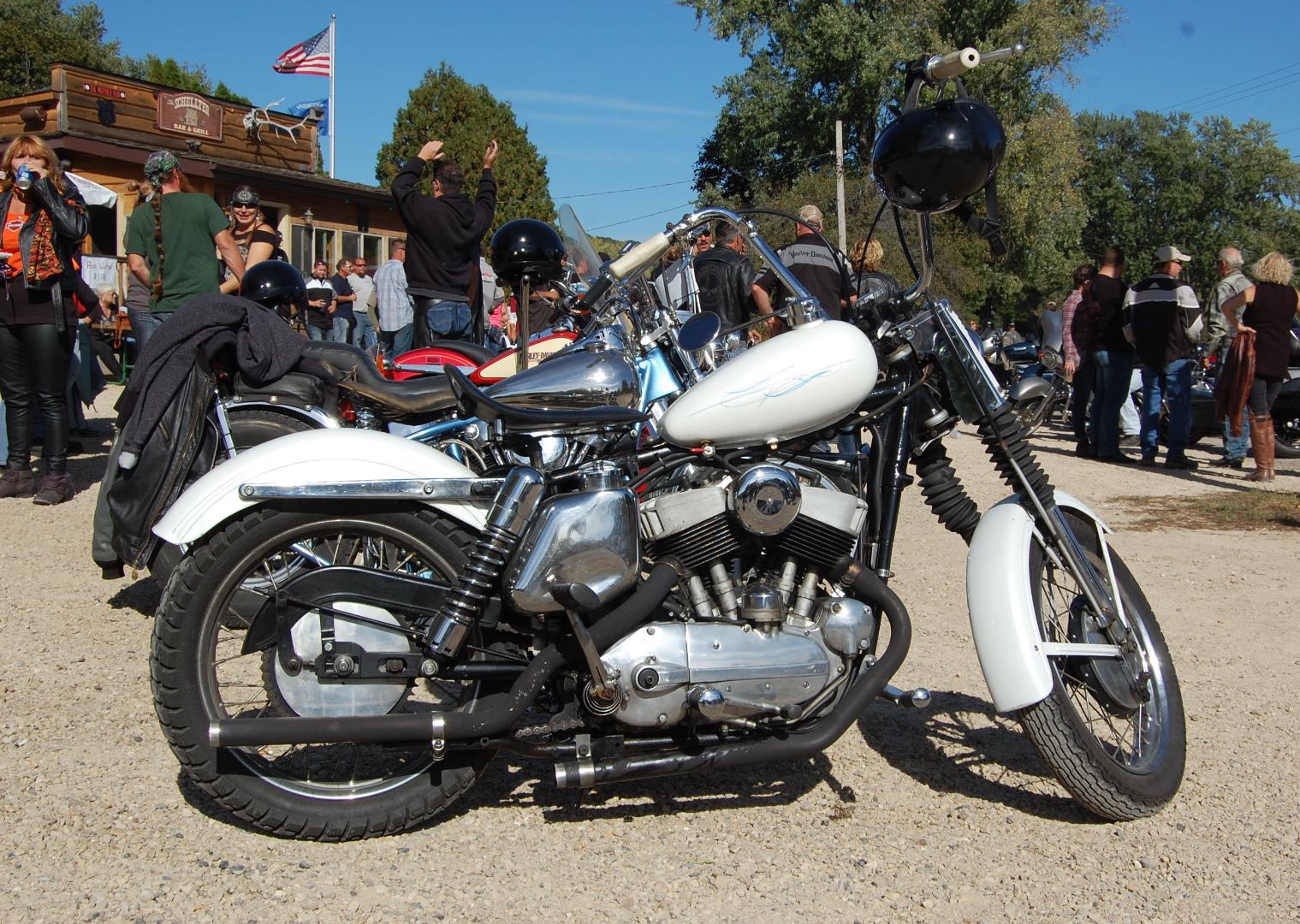 3. Top HD KH custom: You have to admit, you just don’t see enough K and KH flathead Harleys revived as cool customs; at least not in the upper Midwest. The K model started life with a 45 cubic inch (750cc) motor and in 1954, the Motor Company bumped the capacity up to 55 cubic inches (883cc). From there, the KH motor provided the platform for the 883cc Sportster in 1957. 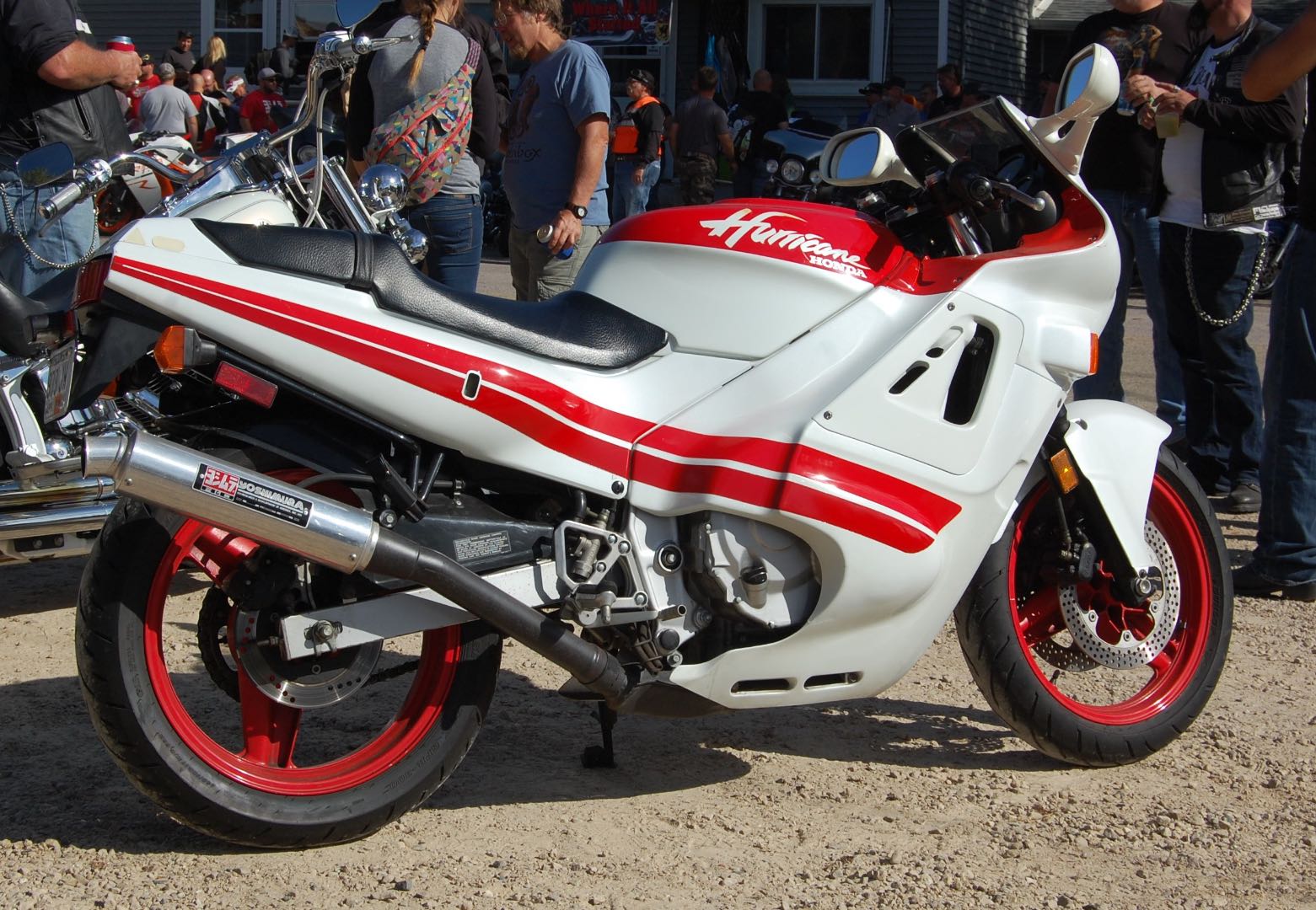 4. Top Honda Hurricane: As far as we know, this is the only Honda Hurricane that made the Crud Run this time around, but it sure was purty! Sounded purty good too! 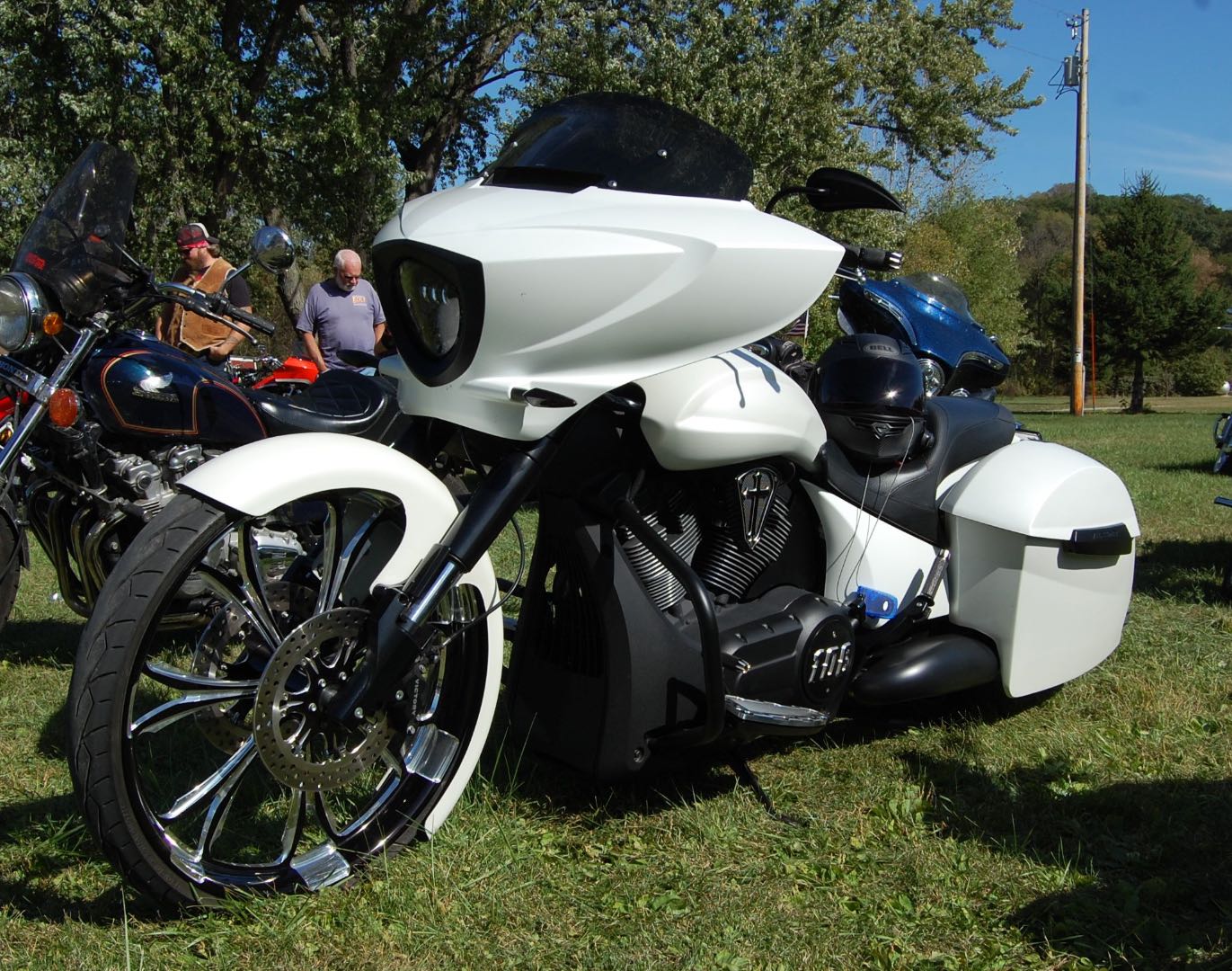 5. Top Victory Bagger Custom: Soon to be a part of motorcycle history, Victory V-twins may become even more desirable as custom platforms. This beautiful bagger, based on a Cross Country, makes the case pretty well. 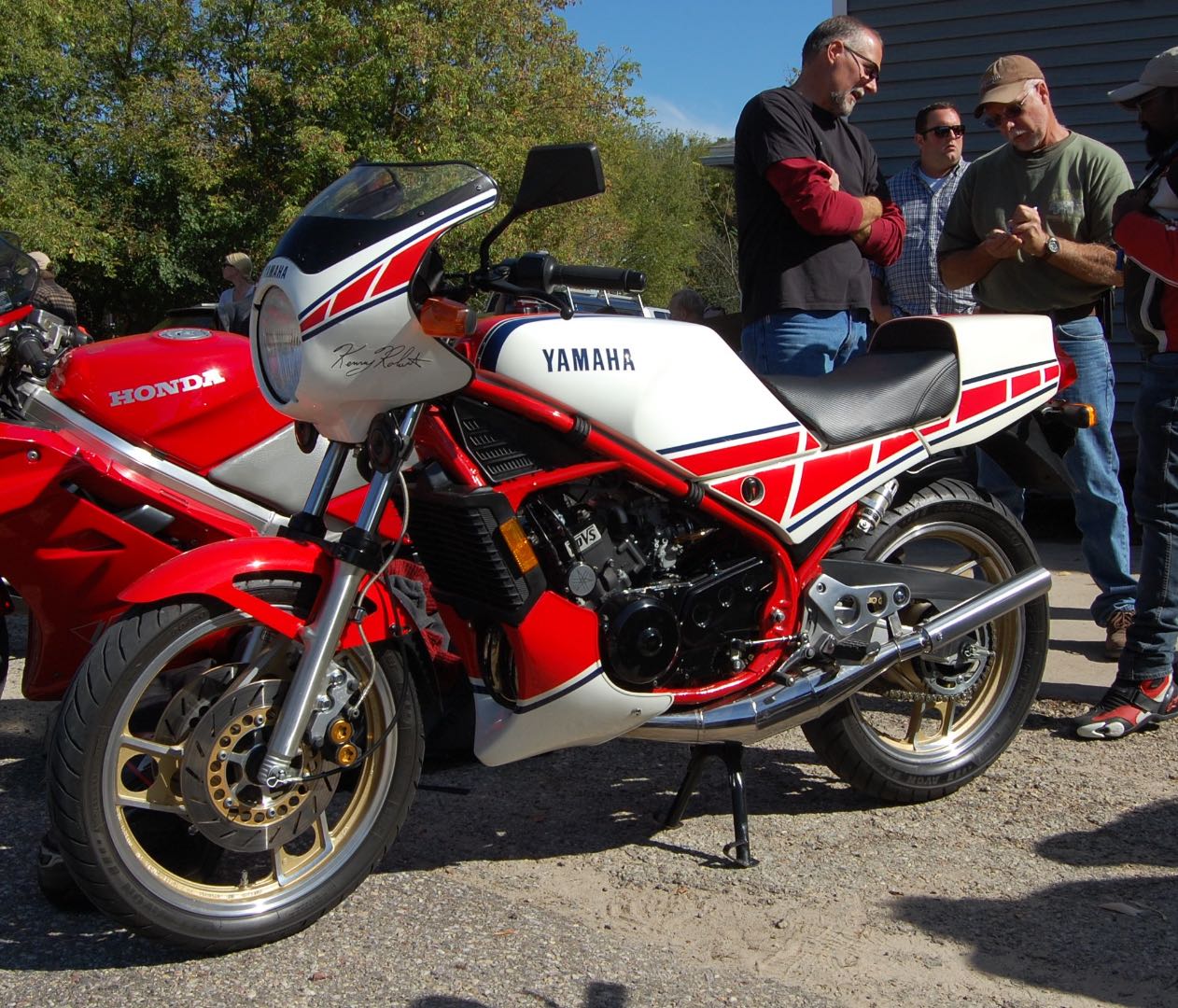 6. Top Yamaha bar none: This Kenny Roberts edition Yamaha RZ350LC is the epitome of slick and quick and has our vote as the best Yamaha on the run bar none. And there were a lot of Yams out there. Sitting still it looks ready to fly and it has to be an absolute gas on a track day. 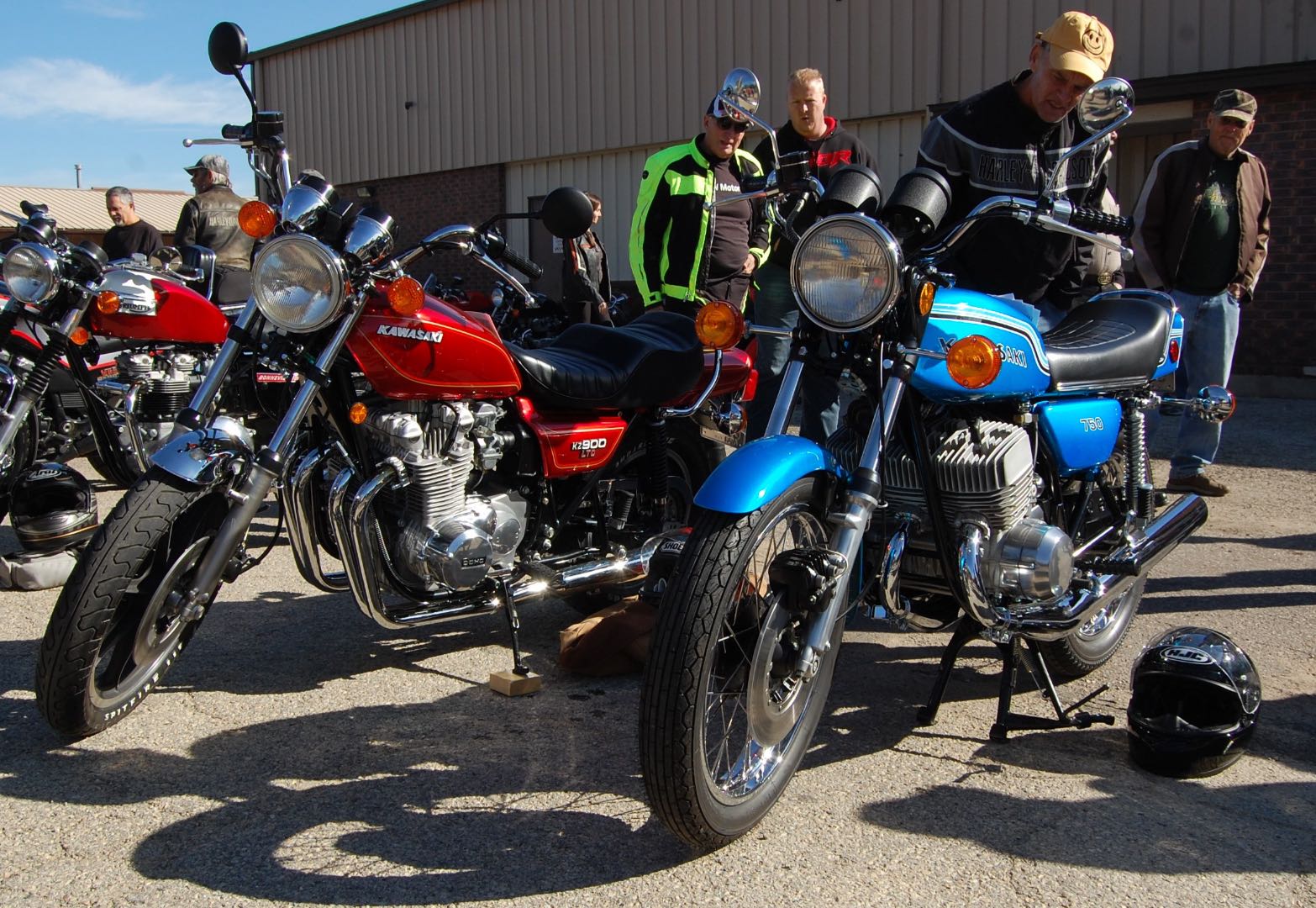 7. Top Vintage Kawasaki Muscle bikes: This Kawasaki KZ900 and Mach IV 750 triple two-stroke were immaculate and had a lot of riders going down memory lane—about the time they found out why the Mach IV was called the “widowmaker.” It is rumored the KZ900 has better manners. 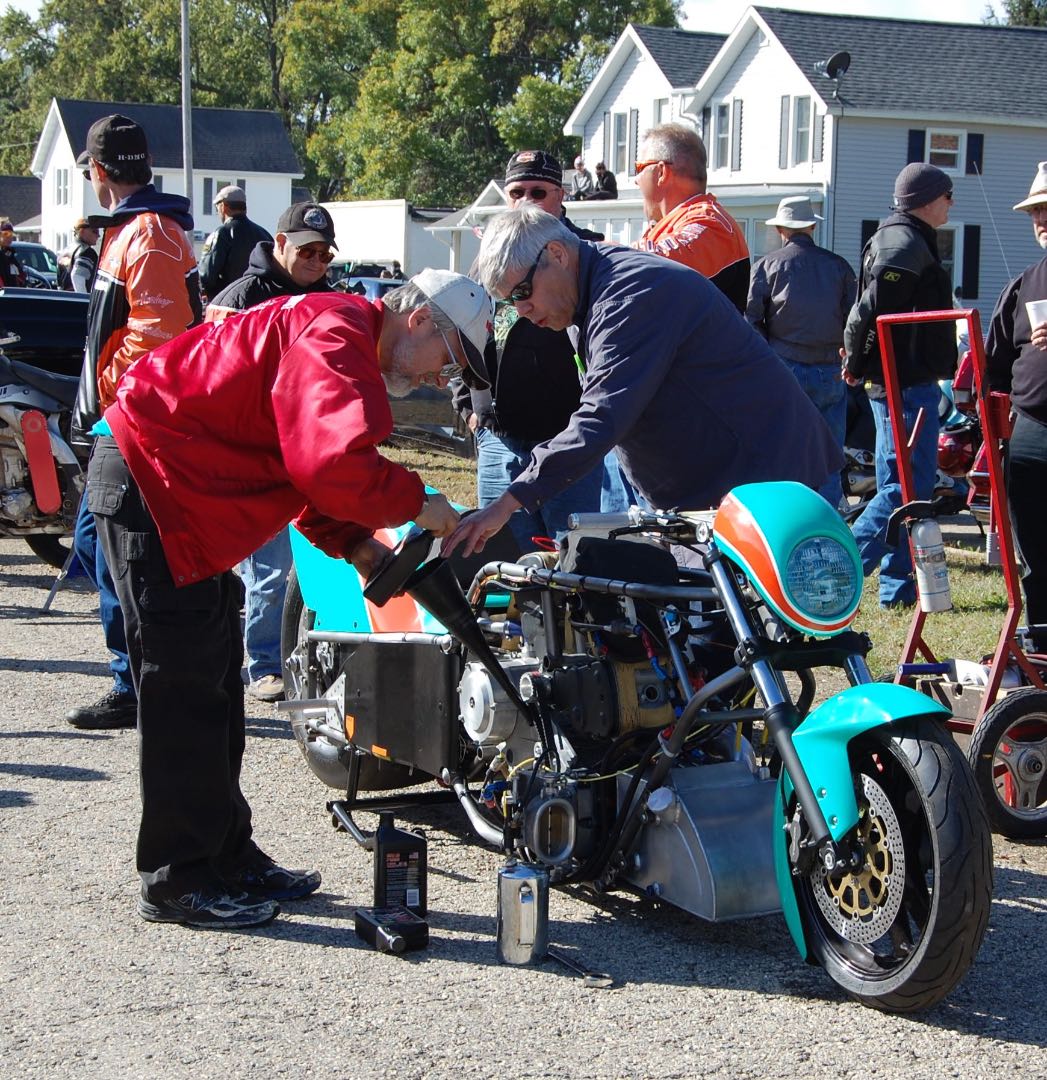 8. Top Crowd Pleaser: Bill Whisenant (left), proprietor of Motorcycle Performance in Madison, Wis., was on hand with one of his Ducatis fresh off double class National Land Speed records at the Bonneville Motorcycle Speed Trials. He fired up this nitro-burning Duc, made the ground shake, windows rattle and the crowd roar, easily making him and his Ducati the Top Crowd Pleaser. 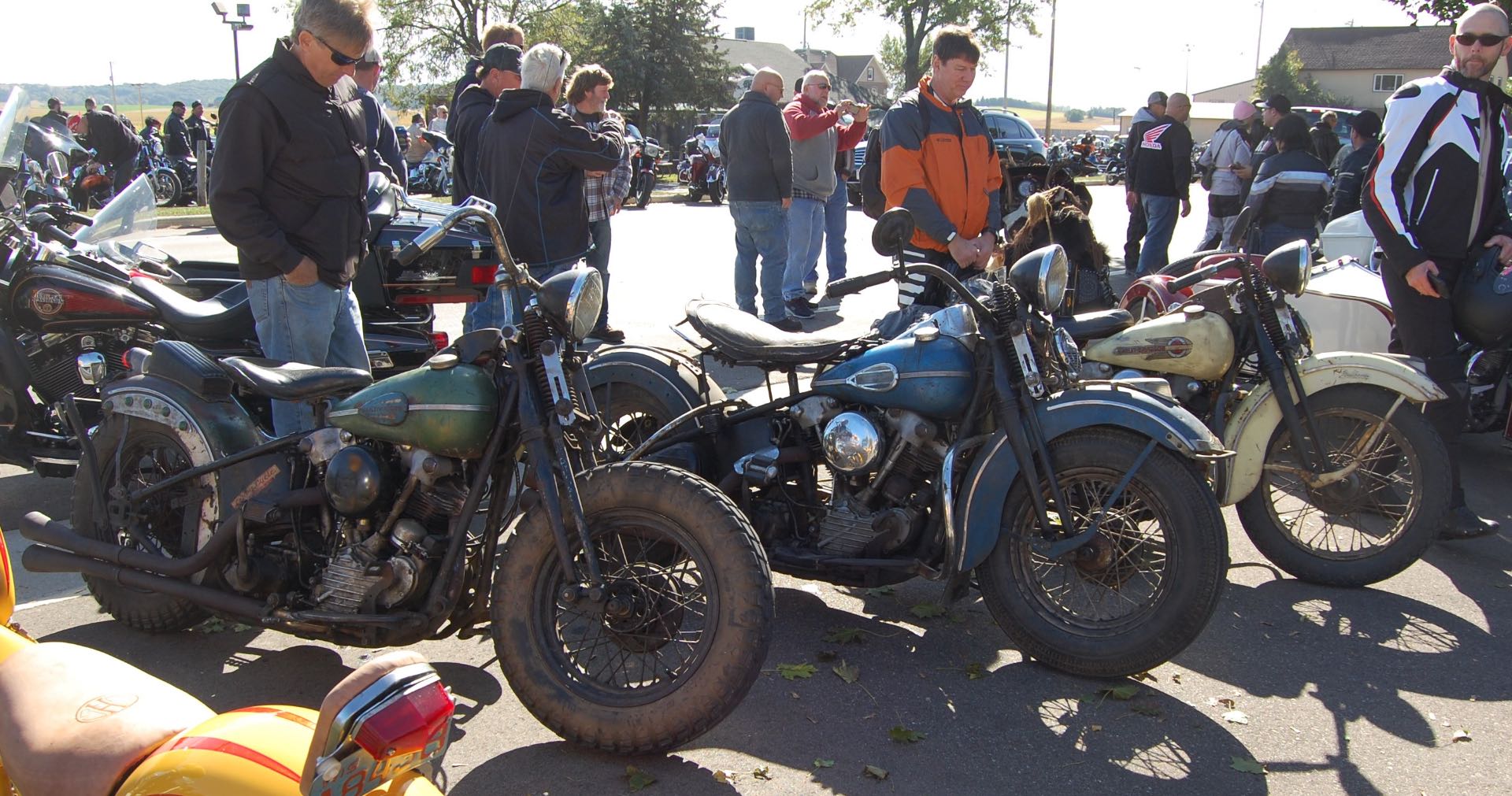 9. Top Knuckleheads: This trio of H-D knuckleheads came complete with hard-earned road grime and vintage patina galore. Some experts feel the knucklehead is the quintessential classic motorcycle; I don’t know about that but they sure are old-school cool. There were a few other knuckleheads out on the road during the run but they weren’t motorcycles; nor were they motorcyclists, for that matter. 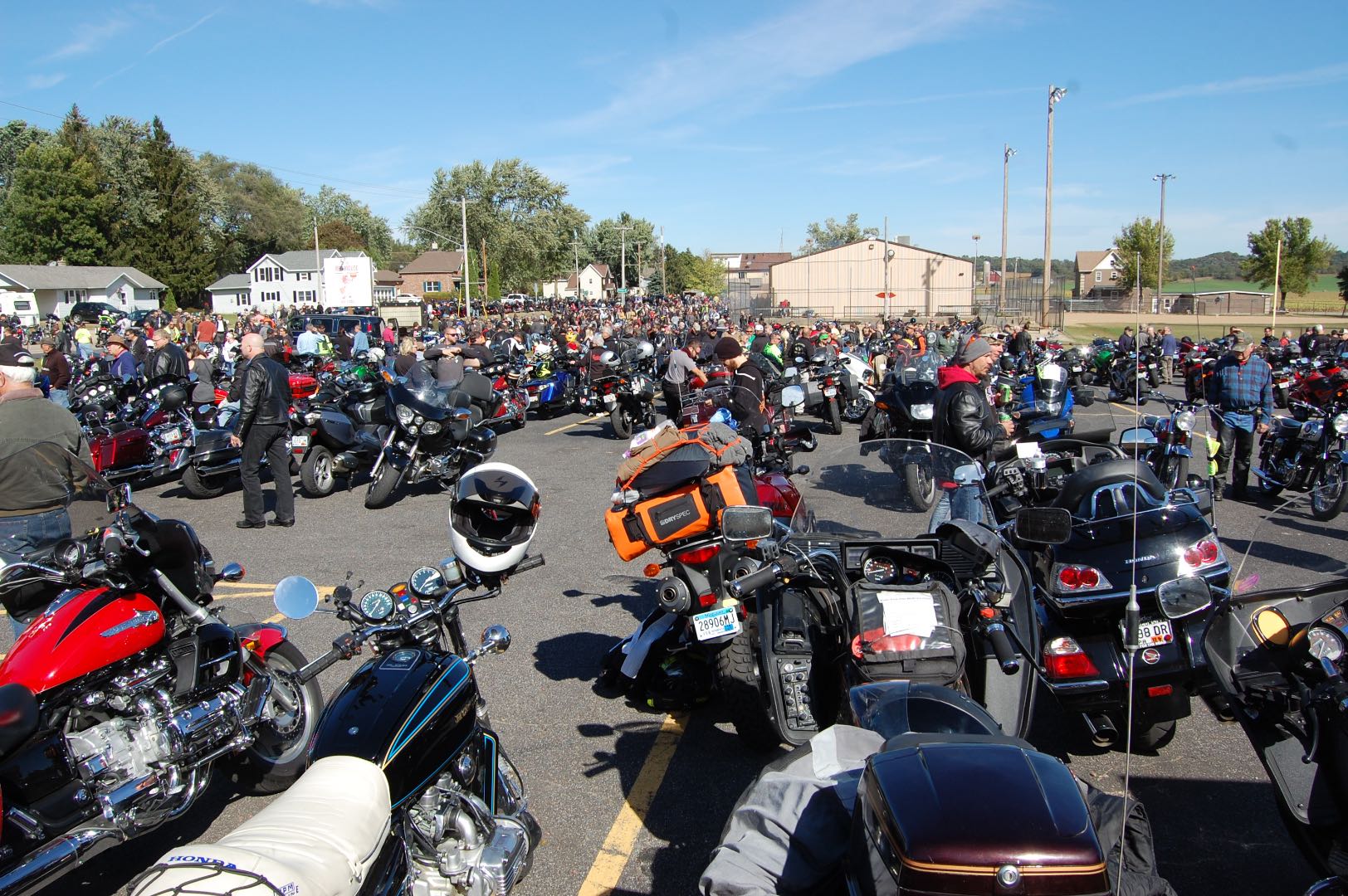 10. Top Crowd: The day started out clear and pretty cool, some may call it cold, but as the sun got brighter as the day wore on the temps went up and the crowd of riders continued to grow. This shot shows only a small part of the mass of riders and bikes at Pine Bluff. If you missed this Slimey Crud event, no sweat; it all happens again on the first Sunday in May 2018. See you there.