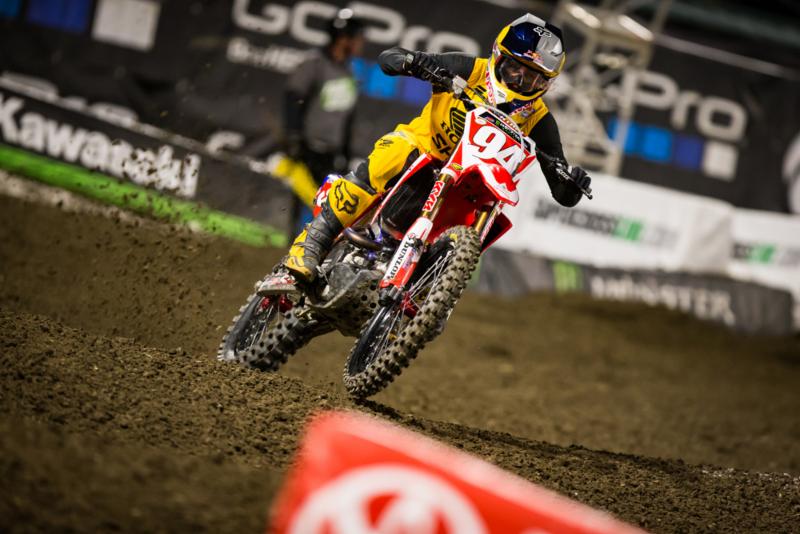 After winning the opening two rounds of the 2017 Monster Energy AMA Supercross season, Team Honda HRC’s Ken Roczen suffered a horrible crash at round three in Angel Stadium of Anaheim. Taking the top spot at Anaheim 2 was the leader at the time of Roczen’s crash, defending Supercross champion Red Bull KTM’s Ryan Dungey.Unlike the first two rounds, Roczen didn’t get a textbook start coming around the first corner in seventh. After making his way up to third, Roczen unexpectedly hit a bump on the approach to a jump. His jump disrupted, Roczen was forced to release the bike while high in the air.Upon impact on the face of the landing jump, Roczen’s his helmet visor exploded into several pieces and his goggles were ripped from his face. Roczen remained on the track until the Alpinestars Mobile Medical Crew attended to him.Eventually, under a red cross flag that lasted several laps, Roczen was carted off the track to be taken to a local hospital for further evaluation. Team Honda HRC released a statement that Roczen’s left forearm had suffered a compound fracture.More drama unfolded earlier in the night after the first Heat race. Early in the Heat in heavy traffic, Rockstar Energy Husqvarna Factory Racing’s Jason Anderson and Smartop/MotoConcepts/Honda’s Vince Friese came together in a turn. Anderson went down, taking Red Bull KTM’s Marvin Musquin with him, while Friese remained upright.After the conclusion of the Heat, in which none of the three riders qualified for the Main, Anderson punched Friese in the helmet while riding through the tunnel exiting the stadium. Friese’s mechanic then retaliated by pushing Anderson, causing the Husqvarna rider to fall over.Anderson was disqualified for instigating the confrontation, and not allowed to race the rest of the night. This dropped Anderson from fourth in the 2017 Monster Energy AMA Supercross standings to ninth.

In the Main Event, Dungey, despite having the 13th gate pick due to a broken throttle in his Heat race, quickly moved into the lead after Monster Energy/Yamalube/Factory Yamaha’s Cooper Webb narrowly nabbed the holeshot. Dungey led the remaining 22 laps unchallenged to take his first victory of the 2017 season.“The whole day was crazy with all this rain,” said Dungey. “I thought we were for sure going to come to a muddy track on track walk, but the Dirt Wurx guys had the track awesome. They did a great job. I had to go to the Semi and it was kind of a rough go. We tried to make the most of it and we got a decent gate lining up for the Main Event.“We really rocketed out of the gate,” Dungey continued, “and found myself in position in the lead thought to myself, this is where it counts. The track was nasty and going away quick. I know Ken had a little incident there. Towards the end it was tricky and tough. We’ve got to keep our heads up, have a good attitude, and keep applying that pressure every weekend. I am very thankful for tonight.”Musquin came around the first turn in fifth and quickly worked his way up behind Team Honda HRC’s Cole Seely, who was in second. Musquin went by a stalled Seely on Lap 12, and held second for the rest of his race. Anaheim 2 was his third podium in the opening three rounds. Seely held on to third place, for his first podium on the 2017 season. Musquin moves into second place in the standings, with Seely 11 points behind him. Seely is tied with Roczen at 51 points.“It was a crazy race,” said Musquin. “I hope Ken Roczen is not feeling so bad right now. The track was really tough because we had so much rain. The track was really good, but there were some soft spots. I made some mistakes, but didn’t crash. It was really close at one point. I would like to congratulate the track crew. They did a great job. With all the rain, we were able to ride on a dry track, which was awesome. Hopefully next time it will be me out front.” 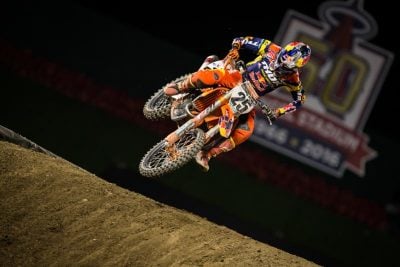 “Once I got into second, I was really trying to chip away at Dungey, but he was running a strong pace” said Seely. “The bike handled awesome and I really liked the track. I was watching some ’90s races the other day and was thinking how they need to make the tracks a little tighter so we’re not quading stuff every time. I’ve got to give a huge shout-out to the Dirt Wurx crew. They’re busting their butts every single weekend for us to have a good racetrack with the crazy weather here in California.”Webb rebounded from the first two rounds of the series where the rookie found himself outside of the top ten in the Main Events. After the holeshot, Webb held second place for a two laps before being overtaken by Seely, Musquin, and Roczen. Roczen’s crash bumped Webb from fifth to fourth, which gave the rookie his first top five finish in the premiere 450SX class. Webb moves up to tenth in the standings.Autotrader/JGR/Suzuki’s Weston Peick started just outside the top five, and put in consistent laps to grab fifth place. Peick’s finish is his first top five finish of the season, and he’s the highest finishing Suzuki rider in the 450SX class so far this season.Monster Energy Kawasaki’s Eli Tomac, a pre-season favorite to battle for the title, had his worst ride of the year. Finishing eighth, Tomac is now fifth in the series standings, 25 points behind leader Dungey. Tomac’s teammate Josh Grant finished sixth, with Monster Energy/Yamalube/Factory Yamaha’s Chad Reed between them. Rocky Mountain ATV-MC/WPS/KTM teammates Davi Millsaps and Blake Baggett rounded out the top 10 at Anaheim 2.Seven/Suzuki’s Malcolm Stewart, the reigning 250SX East champion, raced his first 450SX round of 2017. After starting eighth and running in the top 10 for the first half of the race, he went down on lap 14 and near the back of he pack. Stewart, listing only Seven as his sponsor, finished 18th.2017 Monster Energy AMA Supercross Results – Round 3 – Anaheim 22017 Monster Energy AMA Supercross Series Standings (after 3 of 17 rounds)