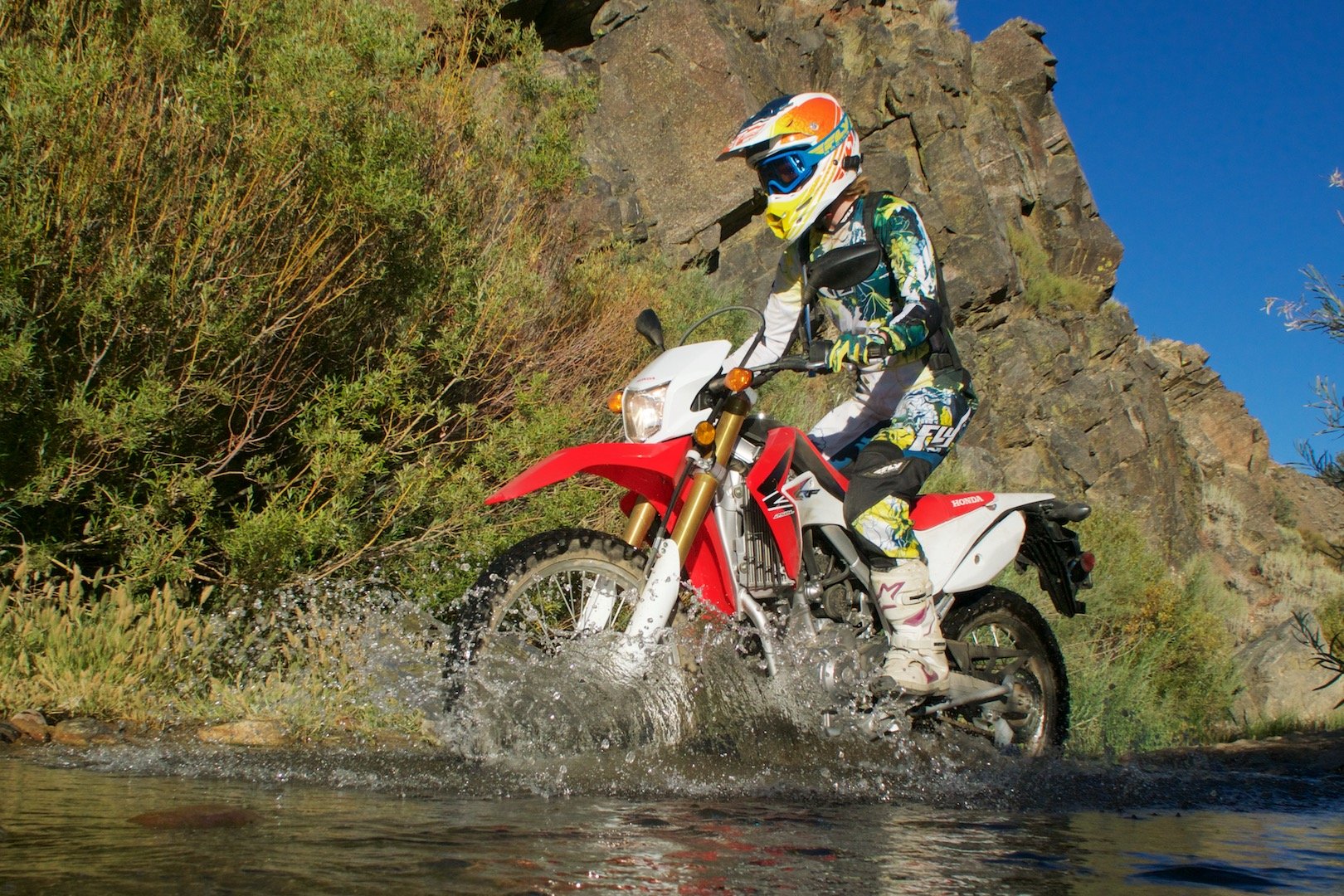 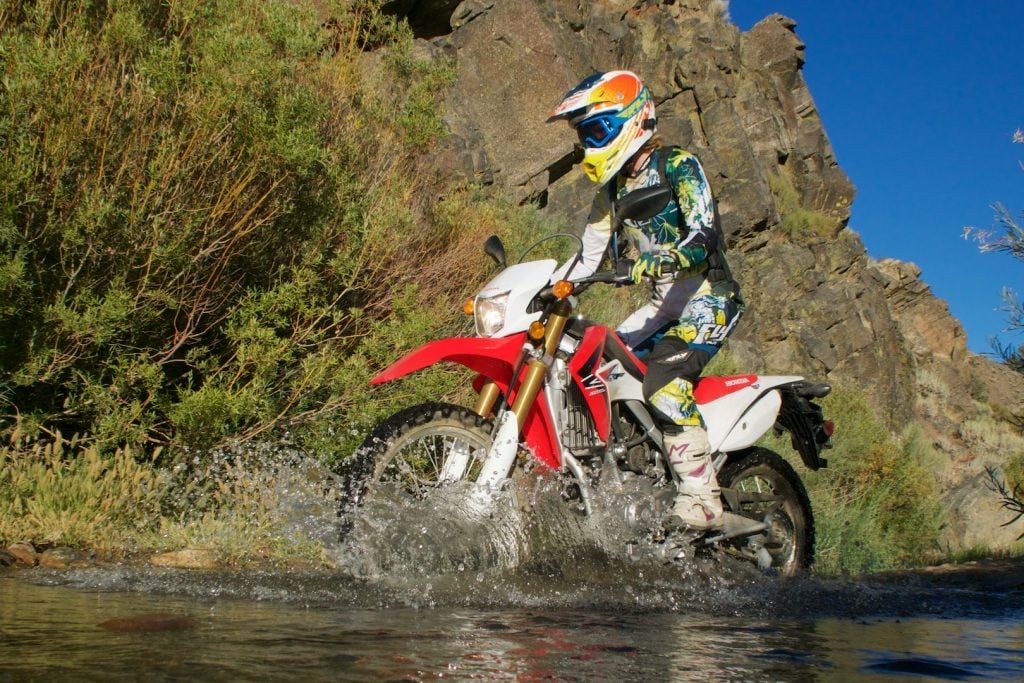 The 2016 Honda CRF250L is the smaller, more-modern bike in Honda’s two-model dual sport line-up, and it is versatile, dependable, and economical. Besides those sensible attributes, it’s also a blast to ride. In fact, it immediately got a favorable comment from a fellow office worker who I had never spoken to while riding up the elevator.That’s no surprise. A bike like the 2016 Honda CRF250L in the parking garage at work says “casual Friday playtime,” not “Monday morning meeting.” With MX styling that its older and bigger brother—the XR650L—does not get, the CRF250L just looks plain cool.There are plenty of motorcycles that can do double duty, whether it’s commuting chores during the week and canyon carving or around-town cruiser on the weekend. But, the quintessential versatile bike has to be a dual sport motorcycle, taking you from your garage to the trail and back.Okay, so the dual sporter carries me to work, I still have to change into my office clothes and get down to business. But, how much more fun was I having on the way to work? Yes, the 2016 Honda CRF250L knows how to take care of the weekday grind; it’s a fun little commuter that requires little effort to ride. 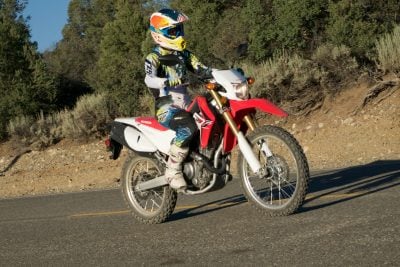 Granted, the bike is tiptoe tall—the 34.7-inch seat height gets the attention of my 30.5-inch inseam. This comes with the dual sport territory, but once I’ve thrown a leg over and settled onto the firm saddle, I can touch the toes of my Sidi Livia Leis on both sides. Still, it is easier is to just lean the bike to one side—it’s light enough—and keep one boot flat on the ground at a stop, so the CRF250L’s height becomes a non-issue pretty quickly.You wouldn’t want to give away any of that suspension, anyway. That’s what gives the bike plenty of capability once you take it off-road, but we’ll get to that later. The Honda CRF250L’s height also provides a terrific vantage point while riding around town. Whether you are scooting to the front of traffic at a stoplight, or simply rolling down the boulevard, you’ll appreciate sitting higher and being able to see over most four-wheeled vehicles.Even though the CRF250L’s oversquare motor is based on the Honda CBR300R’s Moto3-inspired liquid-cooled 250cc DOHC powerplant, there is plenty of low and mid range torque. The bike’s light pull clutch works well with the smoothly delivered low-end power, so getting underway is a breeze. Shifting is light and precise, just as you would expect from Honda—there are neither missed shifts nor trouble finding neutral at a stop.The CRF250L’s upright ergonomics, coupled with a long dirt bike seat for two, low footpegs, and wide handlebars, make it a comfortable and roomy ride. Handling is an absolute breeze; with a 320-pound curb weight it’s light and maneuverable on the street, and the long travel suspension means you can be creative when necessary (or when the spirit moves you).The 2016 Honda CRF250L is the perfect inspiration for a romping weekend ride from one side of town to the other, from the suburbs to downtown, through narrow and beat up roads in the older neighborhoods, or up into the hills to enjoy the views (and maybe find an undocumented dirt trail to sneak down). There is pretty much nowhere the CRF250L can’t easily take you. 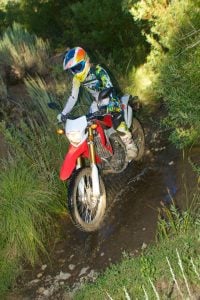 Although the CRF250L is a small displacement bike, it handles the freeway capably. You’ll have to twist the throttle hard to get to top-speed quickly—quickly being a relative term—then settle into the top cog of the six-speed gearbox, which feels like an overdrive. Thanks to a counterbalancer, the thumper has no buzziness at the handlebars, seat or footpegs, and the mirrors are sharp.At legal freeway speeds the Honda CRF250L is decently stable, credit the almost 57-inch wheelbase and over 27 degrees rake. The stock IRC Trails GP-21F and GP-22R tires feel surprisingly secure, though once you push into speeds in the mid-70s, you’ll remember you are riding on dual sport tires.The tires are also a limiting factor when braking. While the 256mm front disc is easily up to the task of slowing the bike, and has a perfectly dialed progressive feel at the lever, there is less rubber contacting the ground.The lack of windscreen and upright seating position don’t lend themselves to an aerodynamic silhouette, and the tank is actually too narrow to get a good grip with your knees. So while it’s good to know the CRF250L can get up to speed should you need to scamper quickly (late to work?), the bike doesn’t engender this kind of riding over long distances.Acceleration is by no means fast on the CRF250L, even if it is a DOHC fuel-injected motor. If you need to make a quick maneuver, you’ll downshift, twist hard, and shift back up, and it still won’t be fast. That’s fine—just ride accordingly. Really, the most fun on the CRF250L is at a relaxed pace.The Honda CRF250L may be liquid-cooled, but it will heat up under your left knee pretty quickly. Especially during these hot summer months, you’ll find yourself riding a bit bowlegged to let the rushing air cool things down. On chilly mornings it’s a plus, and you’ll find yourself hugging your legs close to enjoy the warmth.As much fun as the CRF250L is to scoot around town, riding it off-road opens up so many other riding opportunities, and having the option to ride this bike from your garage straight to the dirt without loading it into the back of a truck or trailer, is a wonderful thing. 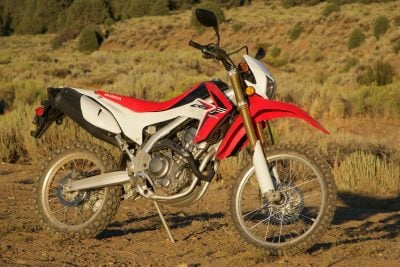 The Honda CRF250L is not a pure trail bike, by any means—it weighs 66 pounds more than the CRF250X off-road-only trail bike. So, off-road expectations are ratcheted down. Still, it does a surprisingly good job on moderately difficult terrain once the IRC tires are aired down to around 16 psi.The engine’s low and mid-range torque make it possible to tackle a variety of dirt routes, including technical trails and single track, with confidence. The CRF250L’s full-size tires roll over rocks and roots well, and they are forgiving when your line choice isn’t perfect.
You will have to be patient off-road. You can’t slam through rough sections with abandon. The bike weighs too much, doesn’t have the suspension to handle hard riding, and the tires aren’t as stable as true knobbies when pushed.Its ergonomics work well when standing on the footpegs, and the foot and hand controls are within easy reach. You’ll enjoy the bike’s roughly nine inches of travel at each end as you bounce along rough and bumpy trails at a modest pace.The handling becomes more difficult on steep, rocky jeep trails. At this point I was reminded of the CRF250L’s taller seat and 320 pounds, which no longer seemed as light as it did on the pavement.The rear disc brake has good feel in the dirt, so is a welcome aid when trying to keep speed under control on downhills. The front brake is equally well tuned, and won’t drop you in the dirt with a too-quick bite, even with the less-than-grippy dual sport tires. This is welcome for novice and experienced riders, alike.The IRCs are a bit weak in sand washes, so you end up feeling a bit like you’re skating even though the bike certainly has the power to get you up on top without working too hard. Fire roads are more fun; the tires have decent grip here, so shift up and keep the engine in its torquey happy spot.While I didn’t expect my weight and skill level to come close to exhausting the suspension, I was still impressed with the bike’s stability when I slammed perpendicularly into a particularly deep squared-off rut, having not kept my eyes looking far enough ahead. I fully expected to have the bars wrenched out of my hands and send me tumbling—a chance to fully test my Alpinestars Stella Bionic Jacket—but the 43mm inverted forks soaked up the abuse. 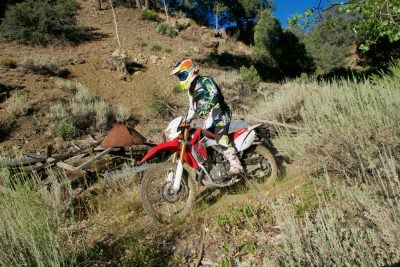 On another ride on a totally fun and challenging Black Diamond single-track trail through the Los Padres National Forest, I over-throttled through a corner, got out of shape, and blew out a sandy berm—pilot error. However, being able to hit that electric start button after taking a tumble is a wonderful thing.Back when I was new rider, I spent a fair amount of time picking myself up out of the dirt, dusting off, and futilely kicking my flooded 1986 Honda XL250R—a distant ancestor of the CRF250L. The second best thing for a beginning rider—the first being the right size bike—is an e-start bike.The Honda CRF250L is a great little package that continues to deliver a lot of value. It puts a big smile on my face every time I climb on, whether I’m heading to work or play—it’s such a carefree, easy bike to enjoy.As much fun as I get out of it as an experienced rider, the 2016 Honda CRF250L is also perfect choice for novice riders who want expand their skills and horizons, as well as anyone looking for a mild mannered versatile machine that can do double-duty on the street and dirt.Photography by Don Williams