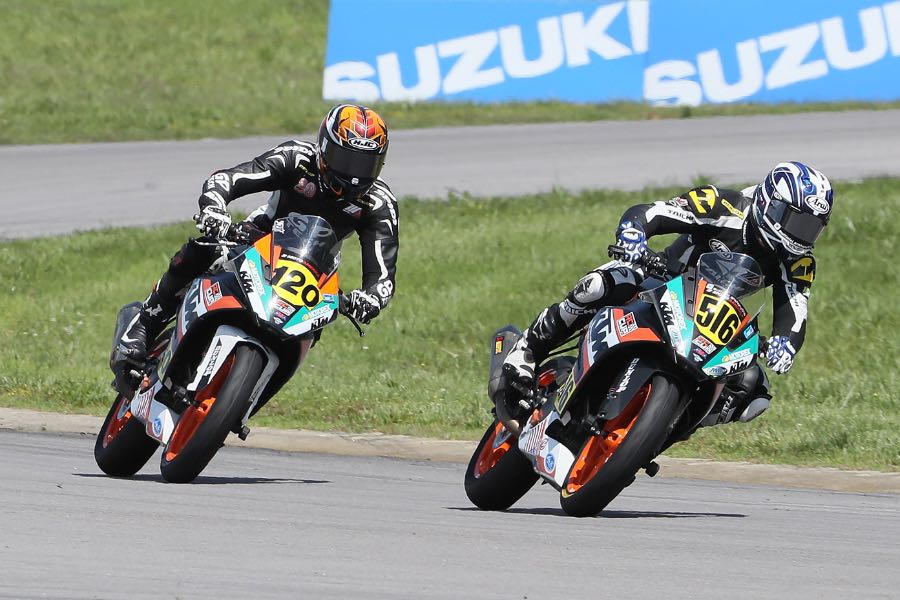 Round three of the 2016 KTM RC Cup – a support series for MotoAmerica – headed south to Virginia International Raceway.The action between the spec KTM RC 390 sportbikes was never ending throughout both 13-lap races, but one rider was untouchable – Anthony Mazziotto III. He doubled at VIR, allowing him to take the points lead from fellow New Jersey native Brandon Paasch, who dominated his home round at New Jersey Motorsports Park two weeks ago.After the 15-year-old Mazziotto earned the pole, he quickly got out front ahead of Ashton Yates and Paasch in race one. Each rider led a lap, and opened up a gap at the beginning of the race.Behind, a battle began for fourth between Alejandro Gutierrez, Brandon Altmeyer and Jody Barry. With Mazziotto now out front of Yates, Gutierrez passed Paasch on the final lap, able to earn his first-RC Cup podium finish.“At the beginning of the race I felt good,” Gutierrez said. “The top three riders created a big gap and it was hard to catch them because it’s a new track for me, so I just tried to keep focused on the last lap to catch them.” 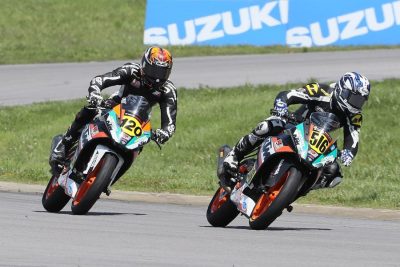 Paasch finished fourth, followed by a hard-charging Barry.Altmeyer got the holeshot in race two, but Mazziotto was quick to respond, making his was to the lead on the opening lap. Altmeyer crashed, but was able to remount and finish the race.Soon Yates, Paasch and Barry filed in behind Mazziotto, with Paasch closing in fast on the leader. Barry and Yates fought just as hard for third.But on lap 11, a crashed rider caused a red flag, and the race ended two laps earlier. Mazziotto claimed the win, followed by Paasch and Yates. Fourth went to Barry, who was followed by Jackson Blackman.“I just put down some really hard laps and hoped that the other guys wouldn’t catch up to me but I knew in the back of my head that they would,” Mazziotto said. “It was a good weekend, I like this track, it’s really physical and I like tracks with a lot more turns.”Mazziotto now has 128 points, five ahead of Yates. Barry is in third with 83.The series now breaks until round four June 3-5 at Road America.