Indian Motorcycle has kept the new 2016 Indian Springfield a secret for the past year and, having seen it early on, we have been anxious to tell you about it.Presumably, the delay was because their other models were doing so well that Indian simply did not have the needed manufacturing capacity.Be that as it may, the news embargo is off and readers should see this model in showrooms about the time you read this review.Indian has been on an incredible roll since its latest revival commenced in 2011, and last year we saw the release of the well-received and acclaimed Scout. Now Indian adds to the touring range with the Springfield, the latest bike to use the muscular Thunder Stroke 111 motor.When designing this package, Indian engineers lightened the steering effort, and allowed for more flexibility in mission, yet retained a 533-pound load capacity rating so as not to compromise its heavy touring capabilities. Indian has positioned this bike in its lineup as a full-sized, jack- of-all-trades that hovers around several categories and mixes well with the other touring models.While the unique chassis configuration was optimized for greater loads, it is a nimble ride, especially for its 815-pound claimed dry weight.Front-end geometry mimics that of the faired Roadmaster and Chieftain tourers, and matches with the lighter style of the windshield-only Chief Vintage (which has four additional degrees of rake). Combined with the quick release windshield and removable, remotely lockable hard panniers, the Springfield has the versatility of the Vintage with the lighter steering and responsive handling of long-distance touring Indians. 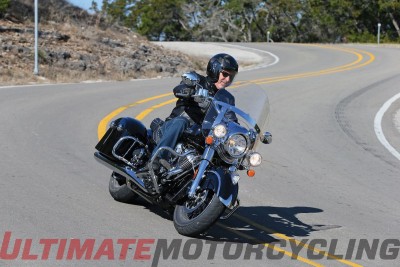 I rode the Springfield from San Antonio to Austin on a cold and cloudy day. The mighty Thunder Stroke 111 motor was familiar, and the bike’s handling proved to be just as Indian proclaims— perfect for the twisting roads of the Texas Hill Country. The Springfield exhibits a bit faster and sharper steering without sacrificing the mellow, go-all-day cruiser comfort and feeling.
The ride is supple and inspires confidence at speed, utilizing cartridge-style 46 mm forks and an air-adjustable rear shock that is pressurized with an easy-to-use, small, mountain bike-like hand pump. Travel is generous, as you would want with a touring bike—about 4.5 inches at both ends.The 130 section front tire helps smooth out the rough stuff and has that big-boy presence. The rear 180/60 has plenty of load-carrying ability with lots of grip and isn’t too ambitious. The profile of the rear also helps the bike transition from side to side quickly and with little effort, even with its almost 66-inch wheelbase.Handling is crisp and the Springfield eagerly leans to the floorboards with no drama. Dunlop Elite 3 rubber is more than up to the task of fully utilizing the Springfield’s agility and cornering clearance.Stopping power from the ABS- equipped, twin four-piston calipers and 300mm front rotors, and single 300mm rear rotor is nothing to brag about, though adequate for managing the type of riding most owners will do on the Springfield. The brakes are not linked and the initial bite is good, with linear delivery throughout the lever stroke.It was kind of quiet in Luckenbach at my first coffee stop. But, even though it was off-season, there were plenty of other tourists at the old post office. Many queued up to see the bike and they asked lots of questions. None recognized it as a new model, fortunately, as it was still tightly held close to the vest by Indian.Typical of all Indian motorcycles, the Springfield draws lot of attention because of the name, while the flawless fit and finish of the bike is first class, adding to the attraction.
The hardbags fit perfectly; paint, gauges, chrome, plastic panels and all other components are well integrated, beautifully crafted, and the sum of all this work presented itself well to admirers, even through a hundred miles of road grime.The scenery was gray and bleak this February day. The Texas blue bonnets were not yet in evidence as I hunkered behind the largish windscreen. The protection from the elements was acceptable, but with temperatures in the 40s, I was dreaming of gloves and a vest with electric heating.The pace was fast as horses headed back to the barn, knowing I would stop at the famous Blue Bell Cafe in Marble Falls. Chicken fried steak with all the trimmings, washed down with coconut cream pie and coffee is a sure antidote for a cold morning—and my thoughts of not gaining any weight on this trip went out the window. 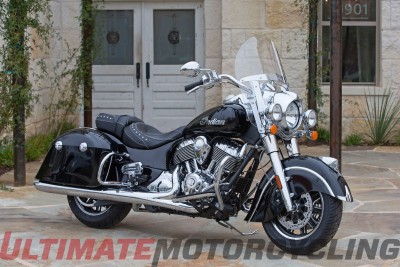 My warmth aside, the Springfield was game. As with all Indian’s models incorporating the 111 cubic inch (1811 cc), 49-degree air/oil cooled V-twin power- plant, just a twist of the wrist is all it takes to effortlessly pull away from a light or blaze toward glory in a streak of chrome.Most of the 119 ft/lbs of torque is available right off idle and, no matter what your riding style may be, you will never worry about being underpowered.The throttle response has no hesitation or at spots, and the six-speed transmission’s gear ratios are well chosen, offering the pilot relaxed rides around town shifting at under 2500 rpm, or hell bent for leather on-ramp assaults culminating at 30 over the limit in the left highway lane.The transmission, as expected of one built to handle this kind of grunt, requires a rm shift action to smoothly execute each gear change, yet the feel was nice and the clutch action was softly positive as one upshifts thought the gears. Whether you putt, or grip it and rip it, the Springfield is happy to follow the pilot’s lead.
Upon arrival in Austin, there was some traffic and congested road riding. The Springfield is nimble enough to thread through these obstacles with little thought or worry. As with many modern machines, once rolling, the Indian feels as if it lost 200 pounds.The list of features is impressive. I’ve mentioned the hard panniers, ABS, removable windshield and cruise control. Also worth noting are the 5.5-gallon fuel tank, tire pressure monitoring, dual driving lights, adjustable passenger floorboards, a large and comfortable genuine leather seat, front and rear highway bars, keyless remote, and internally wired handlebars. Indian claims 30 performance, style and wind protection options will be available concurrent with the availability of the Springfield. 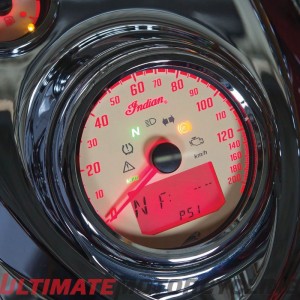 There is a tastefully appropriate and tidy single, tank-mounted dash that incorporates all the expected readouts and warning lights. The ergonomics are spacious, while the cabin layout is simple and to the point.What has been created with the 2016 Indian Springfield is a motorcycle that ts well within three categories. Attach the quick-release, removable windshield and the panniers and head out cross-country. You’ll enjoy the power, protection, cruise control and easy touring demeanor.Remove those items and you’ve got a naked cruiser that will carve canyons and keep the wind in your face for day trips to your favorite destination. Leave the panniers on and you’ve got a bagger. The Springfield is Indian’s American version of the Swiss Army knife.
Riding Style:
Photography by Brian J. Nelson