Indonesian MotoGP fans were thrilled to meet Movistar Yamaha MotoGP’s Valentino Rossi during the Yamaha Indonesia Motor Manufacturer (YIMM) annual “Owner Dealer Business Meeting” (ODBM) held at the exclusive Mulia Resort in Bali. During the nine-time World Champion’s guest appearance, fans praised him for his accomplishments as the figurehead of Grand Prix racing.During the event, Rossi helped Yamaha unveil its new motorcycles for the Indonesian market – the Yamaha Fino 125cc, Yamaha Aerox 125cc and the Yamaha Xabre 125cc.But Rossi ultimately stole the show; vver 100 journalists flocked from all over Indonesia to get a glimpse of “The Doctor,” who pilots the #46 Yamaha YZR-M1 in MotoGP. Following the launch of the new motorcycles, Rossi promoted some new YIMM TV campaigns.Prior to this trip, Valentino Rossi had only set foot in Bali two other times.  Rossi, who finished second in 2015 MotoGP behind teammate Jorge Lorenzo, was overwhelmed with the Indonesian fan bases love and sheer passion for the world of motorsports that the crowd displayed.For the next few days, Rossi will take advantage of all that Bali has to offer, which is a location that could have easily made our ultimate gift guide last year. Following the trip, Rossi heads to Sepang to kick off the 2016 season with the first official MotoGP test of the year.“It‘s my third time in Indonesia, the second time in Bali and coming here always delivers surprises and emotions. Not only Bali is a beautiful place, where I‘d love to spend some time off, but I am always amazed by the welcome Indonesian fans are capable of. Already at the terminal, I met hundreds of people waiting for me and they escorted us on the way to the hotel. Last time I was here was in 2013 and the passion for MotoGP has definitely not decreased! Indeed it seems the number of fans doubles each year,” Rossi says. 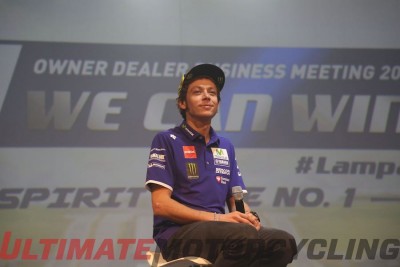 “This is definitely a place MotoGP should come to in the future, as a special thanks to all the fans who followed and watched MotoGP only on TV so far. From a business point of view, Indonesia is a market that is pretty distant from the ones we are used to, in Europe. The sales volume makes Indonesia the leading market for Yamaha, so we have more than one reason to pay a tribute to our friends here by visiting them every time our schedule allows it. Most of these fans will also come to Sepang, in one week, to attend the forthcoming MotoGP test. I look forward to seeing them in Malaysia and pay them back with a strong start to the official season.”Kouichi Tsuji, General Manager of the Motorsports Division / MotoGP Group Leader, YMC, says: “After the winter break, before the Sepang test, Valentino spent time in Indonesia to endorse Yamaha Indonesia‘s ‘Owner Dealer Business Meeting’ and promote their new production bikes, that were just launched on the market. Indonesian people love MotoGP and Valentino‘s visit is the best way for Yamaha Indonesia to thank the fans and customers for their support. Our campaign to get the 2016 title starts from Indonesia and we hope this visit brings good luck to Movistar Yamaha MotoGP.”Organized by YIMM, the ODBM has become a staple event for the market. It is attended by dealer owners, Yamaha Motor Co,. Ltd. and YIMM’s management, as well as over 500 guests. This year, the event was hosted by Mr. Yoshihiro Hidaka, Executive Officer of Yamaha Motor Co. Ltd. and Executive General Manager of 1st and 2nd Business Unit, Motorcycle Business Operations; Mr. Minoru Morimoto, President Director and CEO of YIMM and Mr. Dyonisius Beti, Executive Vice President Director of YIMM.