Sometimes it’s the little things that make a big difference. In other cases, the little things are just that – nice improvements. In the case of the 2016 Harley-Davidson Sportster Iron 883 (XL883N for the alphabet fans), the updates for this year make for a better motorcycle, even if the changes don’t turn the world on its head.The big change is the updating of the suspension. Before you get too excited, it’s worth remembering that the 2016 Iron 883 has the same 3.6 inches of front wheel travel and 1.6 inches of rear wheel travel that it had last year. Needless to say, there’s not much you can do with strokes that short.Fortunately, Harley-Davidson engineers did the best they could with the travel limitations handed to them. The new emulsion technology (oil and air mix in the chamber) used for the twin rear shocks does what it’s supposed to do – soften up the damping enough to take the edge off of the bumps and thumps you’ll find on nasty urban streets.Taking the Iron 883 north from Harley-Davidson’s fleet headquarters toward downtown Los Angeles gives a rider plenty of opportunities to test the suspension. Many of the roads are neglected, and suffer a pounding from semis loaded with import goods freshly picked up from the Port of Los Angeles. There are potholes and ripples, along with dips and sunken manhole covers. It’s the next best thing to a Supercross track. 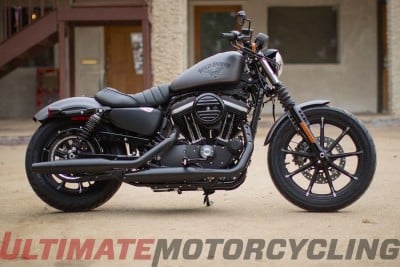 The previous Harley Iron 883 wasn’t too shy about jolting your spine when traversing these rough roads. All you could do was hold and prepare for the inevitable hit. I had to stop myself from doing that, and discovered that the edge had, indeed, been taken off. I could roll over the obstacles without getting punished. Certainly, the comfortable new tuck-and-roll covered seat has a bit more padding to help things along.The new shocks by no means get you a smooth ride. That’s just not going to happen in 1.6 inches. However, it is much less fatiguing when you aren’t bracing for every decent-sized road irregularity. The new shocks still give you that visceral feel for the road, but you’re a bit farther removed from the hardtail feel.With more than twice the travel, the front end of the Iron 883 needed less help, but it still arrived for the 2016 edition. Although the fork tubes remain no larger than bucatini, and the triple clamps still frighteningly petite, the inside of the forks have cartridge technology. That means more precise damping is possible, and hydraulic lock less likely.In practice, the forks seem marginally better. That’s fine, as they were always better than the shocks. Now, they are much closer, which gives the Iron 883 a fairly balanced suspension feel. Front and rear, you aren’t going to get hammered, but you will still get an intimate feel for the road when it’s less than perfect.For me, riding the 2016 Harley-Davidson Sportster Iron 883 is a joy. It’s not great in any way, except for the feeling of being one with a bare-bones machine. As the Iron 883 is very compact, with mid-controls that make me feel long-legged at 5’ 10”, and with a narrow 3.3-gallon peanut tank between my legs, there’s nothing intimidating about the bike. I feel like its master, and nothing happens without my direct input and approval.Handling isn’t bad, for what the Iron 883 is suppose to do. In traffic, lane splitting is easy, thanks to narrow bars and tiny mirrors that don’t quite give me a full view of the road behind me. Power from the Evolution 883 motor is more than enough to immediately get space from the cars you’re sharing a stoplight with. The five-speed transmission has an incredibly short shift lever (and throw), so shifting is quick.In reality, you won’t need to shift often in-town, as the power spread of the motor is generous for its size. The bare-bones dash has only a small speedometer (fine with me) and a few hidden idiot lights. You don’t know what rpm you’re at, but you’ll instinctively know when it’s time to shift. If you hit the rev limiter, you’ll notice how soft it is implemented – very nice. For what it’s worth, Harley-Davidson claims just below 54 ft/lbs of torque at 3750 rpm. Suffice to say, there’s plenty on hand.For the most part, the Iron 883 is a city bike, and will even acquit itself nicely on freeways up to 80 mph for short stints. Sure, you can take it into the local canyons for some twisties, but there’s not a lot of cornering clearance and the pegs aren’t spring-loaded. The 19-inch front and 16-inch rear rim combination isn’t the greatest for sport riding, and the rear Michelin Scorcher 31 tire’s 150mm cross section is much bigger than the front’s 100mm width. Plus, if the road isn’t glass smooth, the suspension will protest. Plan on taking it easy. 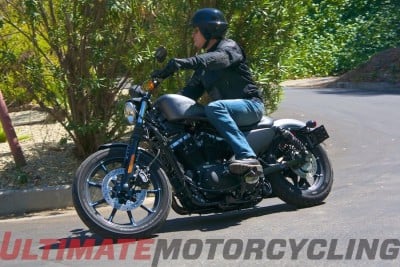 Riding the Iron 883 is so much fun in urban areas, you won’t feel compelled to leave. It looks cool, and even though it’s inexpensive for a Harley-Davidson, people will give you approving nods.The extra black given by the stylists looks great and gives you a bit of a menacing look. The bike is available in Olive Gold, as well as Hard Candy Custom Gold Flake, but I think the basic Charcoal Denim (black) for $8849 is the way to go for a motorcycle called Iron.The XL883N is not a game-changer by any means. However, The Motor Company did a nice job of improving the ride of the Iron 883, making it even more fun to tear around your local town. A big bonus of the Iron 883 is that it is fun for novices and experienced riders to swing a leg over. Harley-Davidson may make other novice-friendly motorcycles, but before they buy one of the Street models, I would strong-arm them into spending a few more bucks for the authentically attitudinal 2016 Harley-Davidson Sportster Iron 883.

Allstate Motorcycle Insurance – Save Up To 50% with Allstate!