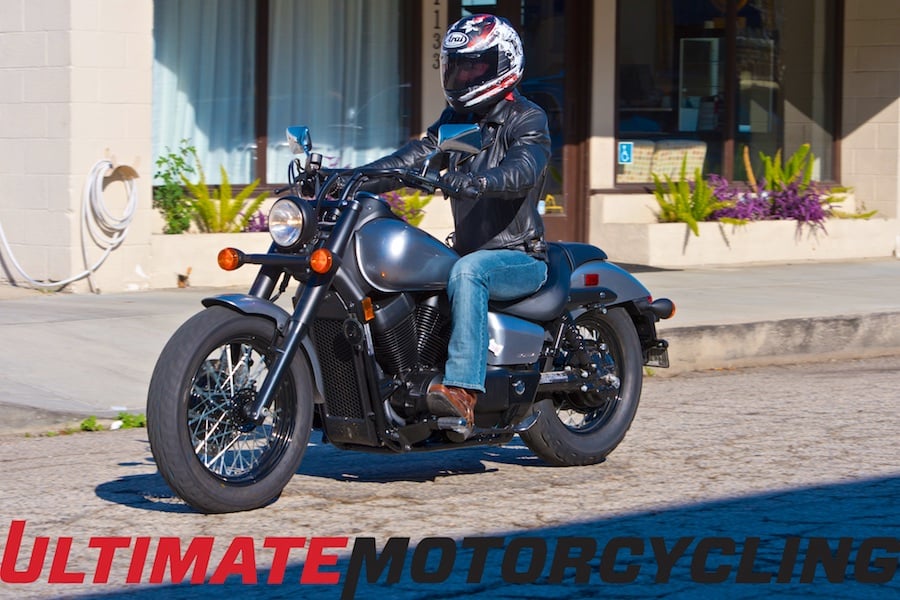 Easy, under-the-radar cruising for those who aren’t all about the bling, growl, and paint, the 2015 Honda Shadow Phantom is well-named, and equally well put together. Perfect for the rider who doesn’t have the length or desire to sit high, the Phantom’s sub-26-inch seat height allows an easy bent leg stance at stops, and nicely positioned foot pegs that are forward, but not stretched.The Phantom’s slightly pulled back bars are a mid-level height that fit a cruiser profile without fatiguing your shoulders at moderate speeds. At a highway pace, though, the arm position gathers a lot of wind and holding on to the large-diameter grips with the windblast will get tiring.The Shadow Phantom is a breeze to handle, from the light pull clutch lever, to the easy engagement of the 5-speed transmission. The liquid-cooled 745cc engine’s strong and docile torque makes low-speed maneuvering a piece of cake. Need to reposition at the gas station? Back up a few feet in the garage? Not a problem, and the low seat height and center of gravity makes the bike feel lighter than its claimed curb weight of 549 pounds.The comfortable ergonomics and willing personality of the Honda Shadow Phantom make it a no-stress completely fun ride down boulevards and back roads alike. Kick it into 3rd gear and settle in for the cruise; there’s no awkward body positioning for the sake of looking hip, and just enough cruiser profile that you do, in fact, look cool while you take in the scenery and enjoy the elements.Suspension on the Shadow Phantom is adequate. Certainly if you’re riding the bike in its sweet spot — the 35 – 50 mph range — and you’re on a well-paved road, you will never feel it is lacking. Bumps, ripples, and pavement transitions make their presence well known at speed, though, but that’s expected with a low seat height and just 3.5 inches of travel under your rear (there’s 4.6 inches up front). Happily, the 17-inch 120mm Dunlop front tire has a solid footprint, providing a real sense of security even when the road is rough.Take the Phantom to your favorite winding roads and you’ll be surprised how much fun some laid-back canyon carving can be. Despite the kicked out 34-degree rake (two degrees more than the Honda Fury chopper), the bike has a solid feel through turns, providing the confidence to lean in. You’ll scrape your heels sooner than later, and on tighter corners the peg feelers will touch down. At no time do the Dunlop tires protest.Roll the throttle on or off as needed, there’s plenty of low to mid-range torque, perfectly suited for the bike’s use. There’s certainly enough power to cruise at 80+ mph on the freeway, but you’ll need to downshift the 5-speed if you want to tap that power for a quick overtake. The 64.6-inch wheelbase keeps the Phantom stable in the higher speeds, but the bike is a lot less fun in this range; you’re really just making time.The Phantom can carve through traffic on the street or freeway with a nonchalant ease. You won’t be making any fast maneuvers, but the engine’s personality is rather well suited to the constantly changing conditions; roll off the throttle and use the robust engine braking to finesse your lane splitting — no need to touch the brakes.There’s a lot to be said for a calm response to rider input; the Phantom will never get away from you and is quite forgiving. It can be ridden aggressively, keeping in mind that acceleration is not its strong point. At legal-plus speeds, the Phantom feels secure, even on rain-grooved pavement (good job, Dunlop), but keep an eye out for bumps because at high speed the suspension will lift you off the saddle.Working the functional angle, the Phantom is completely capable as a commuter bike, as long as you don’t have to put lots of time in at freeway speeds. Options for commuters include a backrest, boulevard screen, and saddlebag supports (the bags will have to come from someone like Tour Master).For longer rides, you will want to look into another seat, as the Phantom’s stock seat encourages frequent rear-end relief periods. Riders with smaller hands may be put-off by the 1-inch-plus diameter bars when putting a lot of time on the bike. Still, the fatter look does give the Honda a bit more of a substantial appearance.Even though they’re quiet, the dual exhausts look good. Traditionalists will scoff at the shaft drive, but it is quiet, clean, and requires virtually no maintenance.The brakes are well matched to the bike, and the rear drum will take care of most of your needs. The single front disc will bring your speed down quickly when called upon, and comes without a nasty overbite.It isn’t flashy or sexy; the Phantom is a good-looking, yet understated bike that gets the job done. If you’re all about the low-key ride, while having a good time cruising on an exceptionally reliable machine, the 2015 Honda Shadow Phantom fits the bill perfectly.Riding Style
Helmet: Arai Signet-Q Tropic
Jacket: River Road Sapphire
Gloves: River Road Tallahassee
Jeans: Icon Hella Denim
Boots: River Road Women’s Traditional Square-Toe Zipper HarnessPhotography by Don Williams