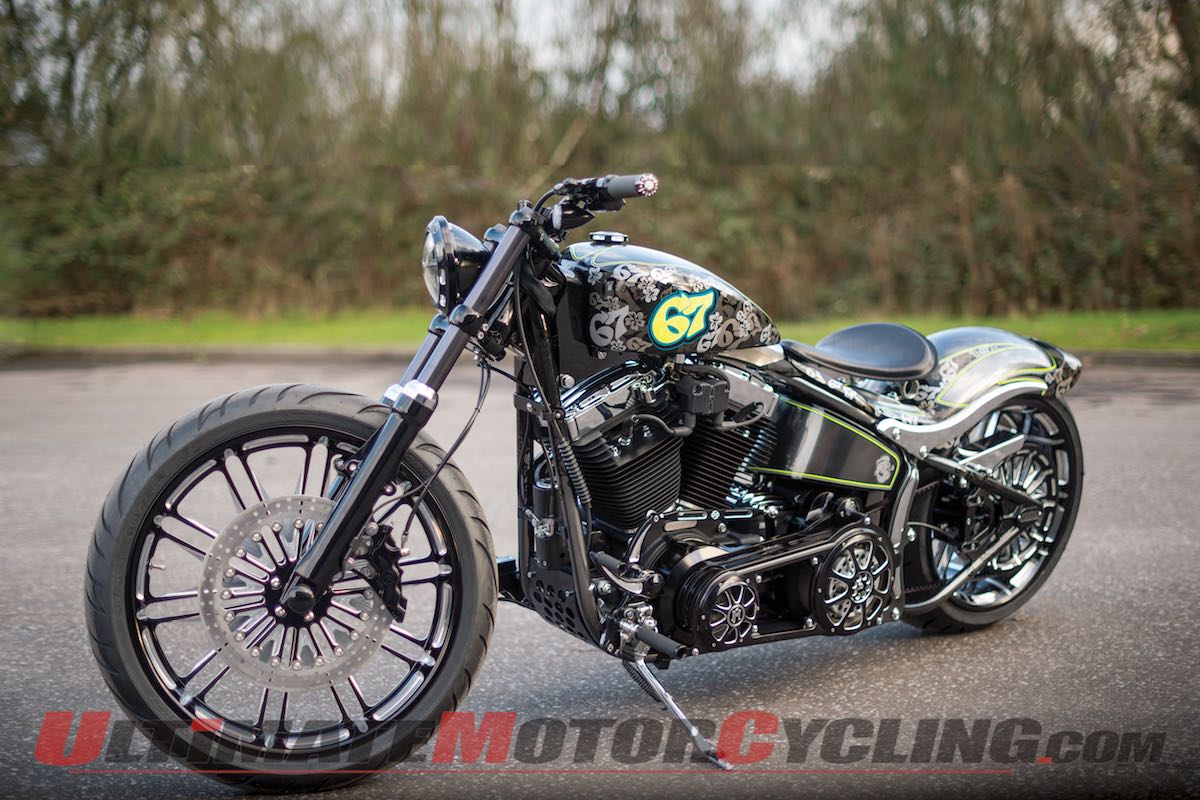 “I cannot claim to have climbed on a motocross bike at the age of three, broken most bones in my body through racing, or dreamt of motorized two wheels ever since I could dream,” Shaw Speed & Custom Team Principal Steve C. Willis admits. “But, I guess I have petrol in my blood. My family had a garage for 40 years where I used to work on the pumps through to being a technician for 16 years.”“We got into the motorcycle industry in 2002 when our current boss took on a Harley- Davidson Authorized Dealership,” explains Willis. Located in South East England, Shaw Harley-Davidson is the parent company, and Willis is its Dealer Principal.“Before that we worked in the Specialist turf industry looking after golf courses and football stadiums with high end fairways, greens mowers, and taking care of the green stuff. Our decision to go with Harley-Davidson was business. We were looking at getting into a specialist marketplace and we found that at the same time that we were looking, Harley UK was looking. Our paths meet, agreements were made, and the rest is history.”It is undoubtedly a long route from fairway to the speedway, yet Shaw Speed & Custom has made the transition with swiftness and grace — and they used an American knowledge base to get started.“The early days were all about learning. In 2007, my boss John Shaw and I went to the states and we meet Russell Mitchell (of Exile Cycles) and Roland Sands (of Roland Sands Design). Roland’s way of customizing Harley-Davidsons was inspirational and was the turning point for us. To this day, Roland is a great friend and I keep in touch with Russell.”The next step for Shaw Speed & Custom came from outside forces. “In 2009, Buell’s plug was pulled by H-D,” Willis recalls. “We had quite a hole appear in our income, so we decided to take customization to another level and build a Speed Shop where people could discuss projects and refurbishments, changes with their current bikes, and custom paint, et cetera.“We thought we would be looking after the Harley- Davidson’s normal clientele. Then, in the winter of 2009-10, we were commissioned to build a custom bike called Strike True II. This motorcycle won the London International Custom Bike Show and then went on to win the 2010 AMD World Championship in Modified Harley-Davidson.”The next leap forward was the iconic Bell & Ross Nascafe Racer, which was featured in the July 2011 issue of Ultimate MotorCycling.“A cold call to the watch designers in Paris is how that went,” Willis explains. “We were building the Nascafe Racer for ourselves to represent at the World Championships in 2011. We felt that the design was looking at going two ways—flat out NASCAR styling or stealth bike. We chose the latter. I educated the Marketing Director at Bell & Ross and they took a massive leap of faith and let us use their brand; it was our bike and their brand. At the end of 2011 they bought the bike, which still tours shops as we speak.“This teaming up and building a bike for Bell & Ross watches really put us on the map and suddenly we were being contacted by people from around the world about the cost of building them bikes. The learning curve then started again, and we are still learning about handling a project for a remote client and getting a bike built on sometimes a very light brief. It’s all very exciting!”Part of that excitement is Project 67, a customized Harley-Davidson Softail Slim built for three-time British Superbike Champion Shane “Shakey” Byrne, who races behind the #67 plate.“I came to know him after he called after seeing some of our bikes,” Willis relates. “He then made a store visit, we con- nected well and we built him 67. [Byrne wanted] to have something different, far away from the world of speed where he is from — a more kick back and big torque bike and, of course, having something different from the rest.“He saw a bike that was in bare metal and loved the silhouette and stance of the bike. He knew this was the look that he was after; the rest was down to us, even down to the paint styling [by Image Design Custom in Camberley]. It was a surprise and, fortunately, he loved every- thing about it.”The build itself was fairly uneventful: “Working with Roland Sands products since 2007, we knew our way pretty confidently in builds like this, so it was all about getting the flow right and making sure all the details were covered,” notes Willis. “We fab- ricated the oil tank—extending it—and, other than that simple change, the most difficult was probably the spoiler on the fender. We wanted to do something unique for him.”Creating a bike for a past MotoGP competitor and World Superbike race winner required Shaw Speed & Custom to stick with its motto: “Rideable Customs.” According to Willis, the Project 67 is “pretty rideable day in day out. If it wasn’t, Shakey would tell us. He’s a good guy for road testing and tells all truths.”Project 67 embodies the ethos of Shaw Speed & Custom. The shop builds “bikes that look great and can be ridden, not taken everywhere by trailer to be shown — giving someone a bike they love to look at and love to ride,” Willis asserts.“We work with customers in the design of their bikes. We encourage mood boards, with anything that they can email or bring for a meeting. We want to totally understand our client in what makes them tick, their style, and make sure the bike has their DNA.”It was an unexpected journey from turf to tarmac, and Willis seems satisfied with the destination.“My passion for Harley- Davidson was natural from opening the doors of the Dealership,” he told us, “and I found my niche. In reality, the business went far more crazy than we expected.”Shaw Speed & Custom Project 67 Specs:Photography by Lee BrettStory from Ultimate MotorCycling magazine; for subscription services, click here.