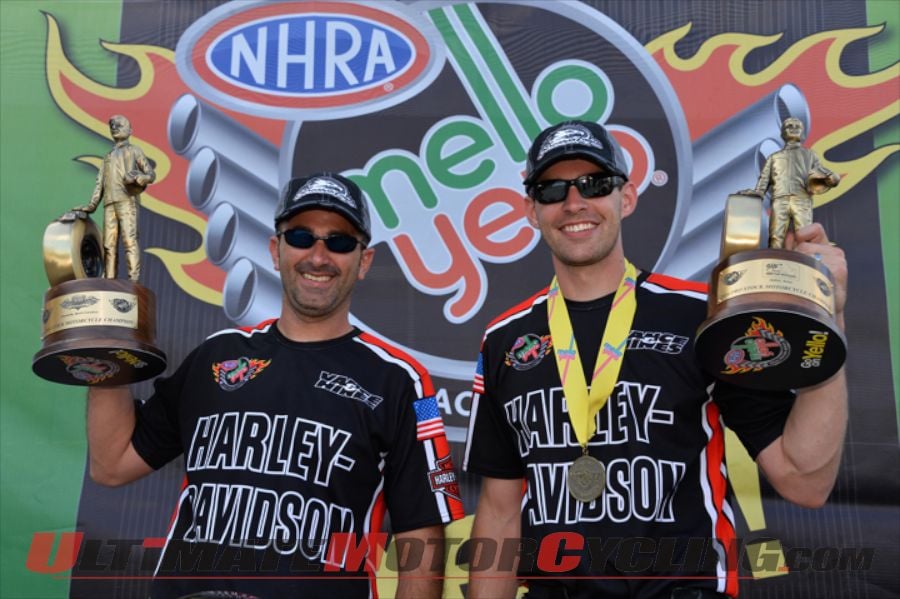 Harley V-RodsThe Harley-Davidson Screamin’ Eagle/Vance & Hines Pro Stock Motorcycle team took an unusual double victory at the AAA NHRA Texas Fall Nationals at Texas Motorplex in a weekend that saw both team riders claim final round wins and trade the championship points lead between each other.Harley-Davidson Screamin’ Eagle®/Vance & Hines rider Andrew Hines actually lost and then re-gained the points lead in the span of 24 hours to teammate Ed Krawiec, who on Saturday won rain-delayed elimination rounds originally scheduled for Sept. 14 at the Pep Boys NHRA Carolina Nationals in Charlotte.Those rounds were run at the Texas Motorplex during qualifying, and Krawiec, the top qualifier at Charlotte, defeated Hines in the semi-final round before getting a win over Suzuki rider Steve Johnson to claim his fourth final-round victory of the season and third in a row. Hines was the top seed going into the first of six Countdown events, but Krawiec took a 23-point lead over Hines on Saturday evening.Krawiec was also the top qualifier for Sunday’s Dallas elimination rounds, with a best Elapsed Time (ET) of 6.841 seconds. But the three-time champion’s win streak came to a sudden end in the first round when he made a mistake at the starting line and lost to Danny Griego/Amerimonte Records Suzuki rider Freddie Camarena.“I just double-clutched at the start,” said Krawiec. “The lever got hung up on my hand and then [my motorcycle] broke loose the back tire and that was it. It’s unfortunate timing, as we had two great-running Harley V-Rod motorcycles this weekend and a chance to win some rounds and put distance between us and some of the other Countdown contenders.”Hines marched to the finals with wins over Lucas Oil Buell rider Hector Arana, Jerry Savoie on the Savoie’s Alligator Farm Suzuki, and Petrolhead Apparel Buell rider Scott Pollacheck. Hines was to face Johnson in the final, but the Suzuki rider could not complete an engine change in time to make it to the starting line. That turned out to be a stroke of good luck for Hines when the transmission in his motorcycle failed as he completed a solo pass to claim the win and coasted over the finish line in 7.571 seconds.“I don’t know what happened in the final but my transmission shifted from first to fifth gear and just came apart,” said Hines. “If Johnson had made it to the start I almost certainly would have lost that round. My V-Rod delivered its best run of the weekend in the first round today and I needed it then to beat Hector Arana, who came out of nowhere and almost caught me at the line. So I was fortunate twice today.”After two of six Countdown events, Hines leads the Pro Stock Motorcycle class with 2302 points. Krawiec is second with 2257 points, followed by Johnson with 2198 points and Lucas Oil Buell rider Hector Arana Jr. with 2177 points. Nitro Fish Buell rider Matt Smith is fifth with 2169 points.The Countdown the Championship continues on Sept. 26-28 at the 3rd annual AAA Insurance NHRA Midwest Nationals at Gateway Motorsports Park in Madison, Ill.