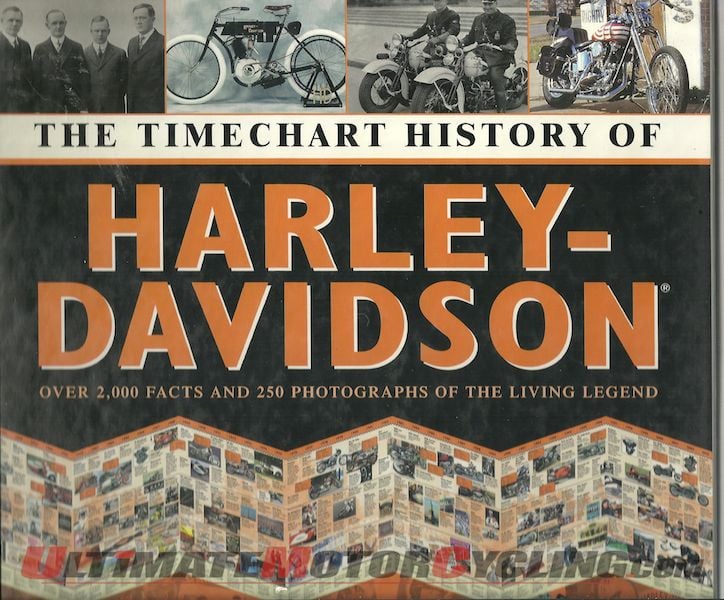 Motorcycle Library Retro ReviewNot every motorcycle manufacturer has enough history to warrant a detailed timechart to help tell the story — let alone one that folds out to 11 feet in length!But Harley-Davidson is one of those kinds of companies, with more than a century of company history to record.The Timechart History of Harley-Davidson is the perfect book for those Motor Company enthusiasts who want to be able to tell at a glance when certain key events in H-D history occurred in the company’s first 100 years—1903 to 2003.The amazing layout of the timechart also allows the reader to see what else happened at about the same time, including technological innovations in the product, major model specifications, people and places of note, design and styling and world events that formed the backdrop of what was done each year.The reverse side includes large images of the landmark models also in chronological order of introduction.As the accompanying images show the book is of epic scale—15” tall by 10” wide and with a fold-out that literally does stretch out to eleven feet! It is entirely published on heavy high-quality glossy bond paper and includes contemporary and historic images not seen in other histories of H-D.In addition to the huge fold-out, there are 32 pages of additional narrative in the back of the book.Another unusual feature of the book is that it is not really attributed to a lead author or editor. Rather, it is described as a creation of Worth Press, LTD. and the book lists an editorial, design and management team of nine individuals.Examples of the content of the timechart and how it works to be the master file of H-D history at a glance include:1936 — the year EL (Knucklehead) model was introduced and with it the new circulating pressurized oiling system, the year art deco design appeared on H-D tank badges, and the year Britain’s King Edward VIII abdicated the throne to marry American Wallis Simpson.1948 — the year the Panhead motor was introduced on the FL model, the first chapter of the Hell’s Angels was formed and the year George Orwell wrote his novel “1984.” 1969—the year H-D was acquired by American Machine and Foundry Co. (AMF), the motion picture “Easy Rider” was released and Neil Armstrong became the first man to set foot on the moon. You get the idea.It is by far one of the most unusual Harley-Davidson history books in print and if you are fortunate enough to find a copy and would like to show it off—well, you’d better shop for a very long coffee table.Book Data:Note to readers: many of the books that we’ll feature in Rider’s Library may be out of print and some may be difficult to find. That could be half the fun. The Internet should make the search relatively easy but ironically, none of the books currently scheduled for eventual retro-review for the Rider’s Library section were found with the help of the Internet. They all were found at book stores, used book stores, antique shops, motorcycle shops, yard sales and so on.