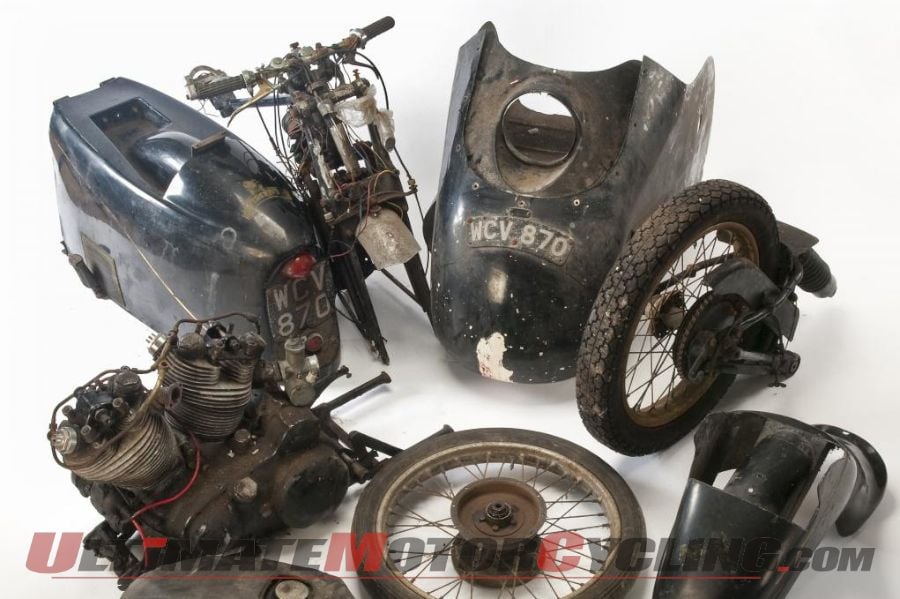 1955 Vincent Black PrinceThis past weekend at Bonham’s Summer Classic Sale of Motorcycles and Motorcars in Oxfordshire in the UK, sales achieved over $4 million – double it’s 2013 total.In the motorcycle department, over 115 lots were sold totaling nearly $1.2 million. And the top seller was a 1955 Vincent Black Prince Project; the 998cc Black Prince project sold for over $153,000, almost four times from its estimate.The Black Prince Project was the highest-selling motorcycle at the Summer Classic, and also broke the record for a Black Prince sold at auction.Speaking of the bidding, Bonhams says “A 1955 Vincent 998cc Black Prince Project created a bidding frenzy, as two gentlemen on the phone battled for their most coveted item. Both bidders had a personal attachment to the bike; one having owned a Black Knight in his youth but always yearned for the superior Black Prince, the other (the eventual winner) sharing a birth year with the bike, and wanting to gift himself the Prince for his birthday.”Also selling were the following:Ben Walker, Bonhams Director for Motorcycles, says: “This years sale was outstanding – an electric atmosphere, and delighted sellers and bidders. With a 93% sale achievement and 115 lots sold, it was certainly our best ‘Banbury Run’ motorcycle sale to date.“With many exceptional models for sale – some of which haven’t been available for public sale in decades – we had bids coming in from all over the globe.”