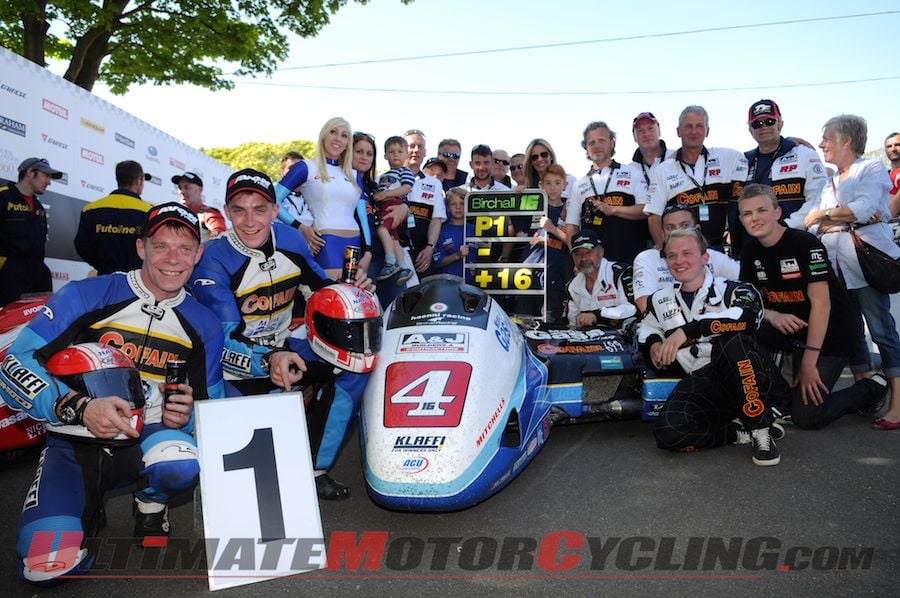 2014 Isle of Man TT Sure Sidecar RacesAs well as six high quality solo races, the 2014 Isle of Man TT Races, fueled by Monster Energy, is set to see two highly competitive Sure Sidecar TT races with a stellar line-up of outfits confirmed.Reverting back to the open regulations, last used in 2010, the entry, again in excess of 60 machines, features no less than six former race winners and nine drivers who have already lapped the Mountain Course at over 110mph. Like their solo counterparts, the quality and strength in depth is undeniable.Sixteen-time race winner Dave Molyneux, heads the field and is number 1 on the grid, with Patrick Farrance again his partner. The duo won both races in 2012 but had to settle for second and third places last year and will be looking to get back to winning ways on their DMR Kawasaki.Last year’s race winners Ben and Tom Birchall and Tim Reeves and Daniel Sayle will be in hot pursuit of the anglo/Manx pair. The Birchall’s, who will again chase World Championship glory in 2014, bounced back following their first race disappointment to take the second three-lap affair last year and are well placed to repeat the feat in their LCR Honda, again entered by former triple race winner Austrian Klaus Klaffenbock.Reigning British F1 Champion Reeves, who starts one place behind the Birchalls from third,  will again have Sayle on board as passenger.   This year they will be using a DMR, rather than LCR, chassis. The Kent-based driver led the Sure Sidecar 1 race last year from start to finish and, like Birchall, set his personal best lap of the course during the meeting.   As the TT is his main outing of the year he’ll be focused on taking his second win. Sayle, meanwhile, will be hoping to make it nine wins and become the most successful passenger of all time.A fourth former race winner is at number 4 in the shape of John Holden and Andy Winkle. They took a brace of fourths last year but went on to clinch the British F2 Championship, highlighting that they are still very much at the top of their game and ready to at least double their haul of TT wins.Conrad Harrison and Mike Aylott start at number five and, while they have yet to take a win, have consistently been close with a superb record of six podiums in the last seven races. A first victory is long overdue for the ever-cheerful Bradford driver whose son Dean stood on the TT podium for the first time at last year’s meeting in the Lightweight TT solo’s class.They’ll be followed down Bray Hill by Gary Bryan and Jamie Winn, another consistent pairing, who regularly finish inside the top six, getting quicker around the Mountain Course every year.  They will be well placed to pick up the pieces if the likes of Molyneux, Birchall and Reeves fail to finish.At seven and eight are two returning crews, 2003 race winner Ian Bell, now partnered by son Carl, and Nigel Connole. Bell hasn’t competed at the TT for ten years but has been winning in the British Championship, Southern 100 and Scarborough so is sure to be near the front of the race while Connole returns for the first time since 2008. Although yet to stand on the podium, the Scunthorpe driver has three top six finishes to his name as well as a personal best lap of 110.562mph.With no-one at number nine, due to a withdrawal, Greg Lambert, Lambert who will be having his 22nd successive year of TT competition is the final seeded driver at Number 10.. The double podium finisher has Kenny Cole alongside him this year.The next group of ten riders sees more quality in the form of Manxmen Karl Bennett/Lee Cain (11), Frank Lelias/Paul Knapton (12), Rob Handcock/Basil Bevan (14), the evergreen Roy Hanks/Kevin Perry (15), Gordon Shand/Phil Hyde (16), the father and daughter pairing of Tony Baker/Fiona Baker-Milligan (17) and Wayne Lockey/Mark Sayers (18).The returning crews of Carl Fenwick/Phil Knapton and Dave Wallis/Steve Wareham have been awarded numbers 19 and 20 with second place finisher in 1997, Vince Biggs, having his first TT outing since 2000, lining with nephew Robert at number 25.Many of the class stalwarts are back including Mike Cookson/Kris Hibberd (22), John Saunders/Robert Lunt (26), Tony Thirkell/Nigel Barlow (29) and Howard Baker/Mike Killingsworth (30).The field is again full of overseas talent with France dominating the International pack with  Remy Guignard/Frederique Poux (23), Francois Leblond/Anne Garnish (33), Estelle Leblond/Sebastien Lavorel (41), Claude Montagnier / Tomas Bordier (40) and Franck Barbier / Emmanuel Debroise (47) and Eric Beneteau / Yannick Naboulet (62) Other international competitors include Austrian Michael Grabmuller/Justin Sharp (36), and Australians Darryl Rayner/Richard Lawrence (43) and newcomer Australian father and son pairing Dwight Beare* / Noel Beare* (61).Darren Hope/Paul Bumfrey, fast newcomers in 2013, return while new names set for their Mountain Course debut this year include leading lights from the British F2 Championship John/Jake Lowther and Alan Founds/Tom Peters.