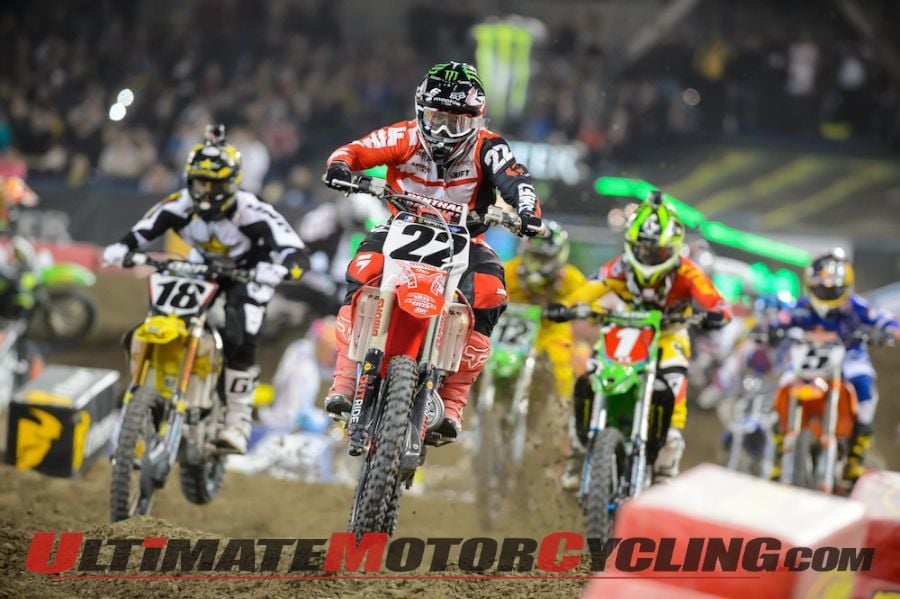 2014 AMA Supercross NewsFeld Motor Sports announced today that Motorcycle Mechanics Institute (MMI) signed a multi-year agreement to continue as the official technical institute of Monster Energy Supercross through 2016. The partnership marks the tenth year MMI has been a loyal sponsor of Monster Energy Supercross.In 2014, the MMI/Jeremy McGrath Scholarship program, which began in 2004, will offer $20,000 to deserving recipients hoping to attend the MMI at either the Phoenix, Ariz., or Orlando, Fla., campuses.Jocelyn Omen (Market Segment Manager, UTI) says: “As the leading provider of post-secondary education for students seeking careers as professional motorcycle technicians, sponsoring the Monster Energy Supercross and recognizing the top technicians in the racing series is a natural fit.“We see firsthand how passion drives our students to push themselves and exceed goals in the classroom, so it’s exciting to see these talented technicians do the same to help their teams.”MMI, a division of Universal Technical Institute (UTI), will once again award the top-performing technician at the conclusion of each supercross race with the MMI Top Tech award, including a $500 check. The Top Tech award is given to the technician, who against all odds, helped their rider qualify for the Main Event and will be showcased at the end of the night’s racing action. At the conclusion of the 17-race season, the championship’s top technician will be awarded the prestigious MMI Champion’s Mechanic award.Jeremy McGrath says: “It’s exciting to once again offer these scholarships to deserving individuals who want to translate their passion for motorcycles into a rewarding career through a program that is the industry gold standard for training.”Ryan McSpadden (Vice President of Sales for Feld Entertainment) says: “Feld Entertainment is proud to announce a new multi-year partnership with Motorcycle Mechanics Institute for Monster Energy Supercross.“Entering their tenth year being a sponsor of Monster Energy Supercross, we look forward to continuing our successful relationship with MMI and helping students achieve their dreams in the motorcycle industry.”The successful alliance between Monster Energy Supercross and MMI has launched the careers of several aspiring supercross/motocross mechanics. Of the top teams in Monster Energy Supercross, nearly 25 percent of their mechanics are MMI graduates.For the first-time ever, the entire Monster Energy Supercross season will air live on FOX Sports. FOX Sports 1 will air 13 races live and Fox Sports 2 will air four races live, in addition to every race re-airing on FOX Sports 2. The live Monster Energy Supercross programming on FOX Sports 1 and FOX Sports 2 also includes live coverage on the authenticated FOX Sports Go app.For more information on the Monster Energy AMA Supercross, an FIM World Championship, please log on to www.SupercrossOnline.com, the official website of Monster Energy Supercross.