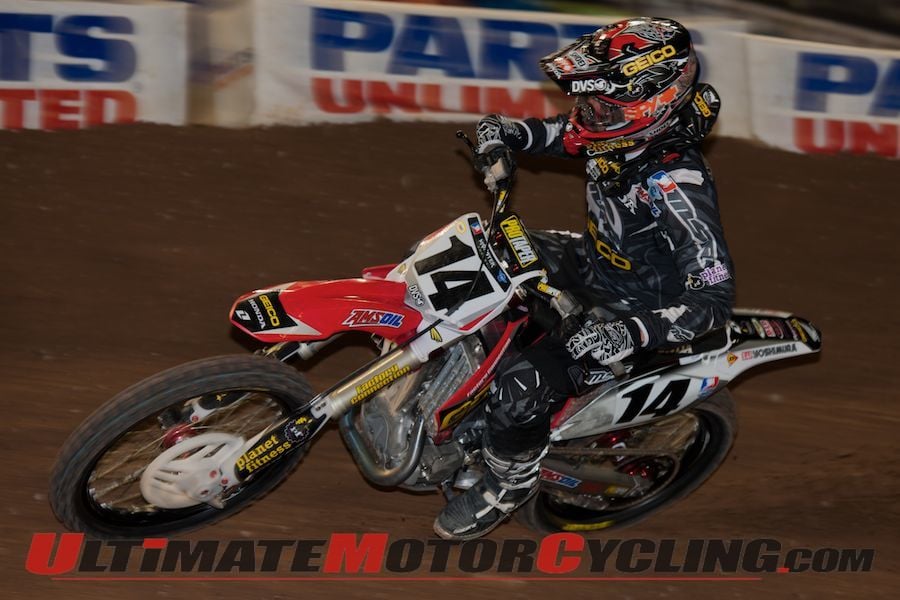 AMA Supercross NewsThe storied Monster Energy AMA Supercross racing career of GEICO Honda’s Kevin Windham has come to a close.Windham, 34, ended his 19-year pro career on Saturday night at Angel Stadium of Anaheim. The veteran wrapped up his career with 19 wins, more than 200 Supercross starts (second on the career list), two Supercross Lites titles, and three runner-up Supercross points finishes.Kevin Windham says: “I would love nothing more than to ride forever. The choice (to retire) was going to be hard no matter when I did it.”Windham had wanted to stretch his career through the 2014 Supercross season, but he said after a crash in Houston that ended his 2012 season and a spill and concussion at the Monster Energy Cup last October that the dangers of the sport weighed too heavy on his mind.Kevin Windham says: “I would love nothing more than to ride forever. To the fans of Supercross, this might seem to be a hasty decision, but I’ve been talking to a lot of people for a lot of months. I thought I would be able to come into the season and ride myself out of that funk and that mental hurdle I was having to overcome. With every passing lap – be it at the test track, my home track, or the stadium – it became more and more difficult to ride with the clarity I needed to be safe, fast, and successful.“The common comment from the people I’ve spoken to was that if you aren’t riding with clarity, you are asking your fears to come upon you. It wasn’t the storyline I wanted to write or the final chapter I envisioned, but it became obvious, and we’ll try and figure out what’s next.”GEICO Honda team manager Mike LaRocco, who is first in Supercross career starts, said he saw the first signs of Windham seriously mulling retirement starting at the first race of the season.Mike LaRocco says: “He was kind of coming to the races stressing about things that guys don’t normally stress about. I knew at that time that when you think that way, it’s the beginning of the end. He was worrying about things he shouldn’t be worrying about, especially considering his experience and talent.“Having been there (myself), you just can’t get it out of your head. So when you are comfortable with what you’ve done and what you have, it’s hard taking that risk.”Windham’s last win came in Salt Lake City in 2010, the second of back-to-back victories he had for GEICO Honda that season.Kevin Windham says: “The whole GEICO Honda program along with sponsors MSR and DVS, their support has been great. I’m in a good place with a good team. My team and sponsors are behind me with this decision, and I hope the 40,000 people in the stands tonight will be, too.”The veteran rider, who had become a universal fan favorite over the last few years, said that connection with the sport’s loyal following will be what he misses the most about racing.Kevin Windham says: “The fans of Supercross have been amazing to me. Those trophies aren’t made of anything, and they’ll just sit there and collect dust. When you have people who come up and share their favorite moments that you gave them, it’s a huge part of why I stuck around as long as I did. It means something to them, and in turn those memories mean something to me.”Windham said he plans on spending time with his wife, Dottie, and children, Madelyn, Annabelle, Elizabeth, and Kevin Jr. However, he doesn’t plan to wander too far from the sport that’s been such a large part of his life.Kevin Windham says: “I’ve been racing motorcycles for 31 years now, and I expect I’ll keep riding on some level. I’ll ride with my son, who wants to start to ride right now. I want to help all my kids do everything they want to do. I don’t know what I’m going to do next. My Planet Fitness clubs are doing great, and I’ve got a great family.“When I was 16 years old, I felt like I was losing my weekends because of racing. It didn’t take me long to realize that my weekends were already being spent with my family – my racing family. We’ll find that next chapter, and I don’t think it will be too far away from where I’m at right now.”Submitted by GEIGER MediaPhoto by Don Williams