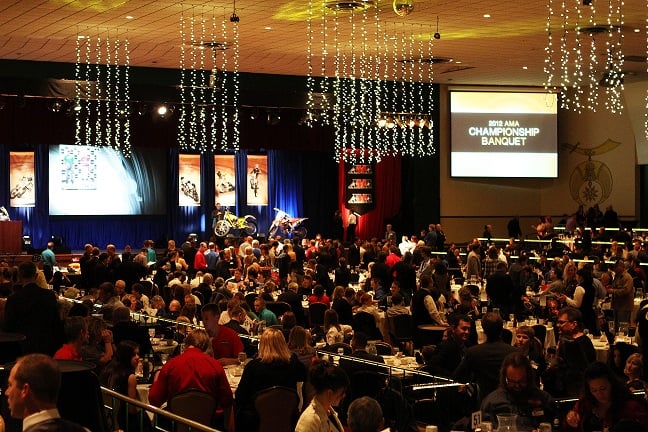 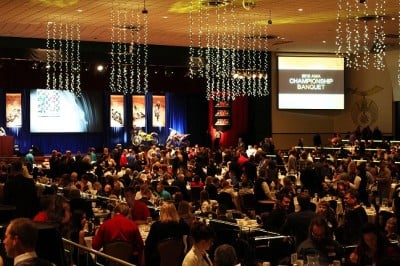 AMA Championship BanquetThe American Motorcyclist Association honored the accomplishments of hundreds of AMA champions from all motorcycle racing disciplines on Saturday, Jan. 19, at the Aladdin Event & Conference Center in Columbus, Ohio.The banquet celebrated the 2012 racing season and announced the recipients of a number of special awards that recognize the best of the best.Speaking at the banquet, AMA President and CEO Rob Dingman thanked all AMA competitors for their contributions to the sport of motorcycling and congratulated them on an unforgettable year.Rob Dingman (AMA President & CEO) says: “You are here tonight because you are among the best motorcycle and all-terrain vehicle racers in the country. Through your hard work and dedication, motorcycle and ATV racing has become one of the most exciting and entertaining pastimes in America. AMA racing and recreational events are special because we accommodate riders from a wide range of skills and abilities, making motorcycling the greatest family sport on the planet.”Emceed by Laurette Nicoll and Greg White, the banquet awarded national championship trophies, placement medals and AMA No. 1 plates to competitors from disciplines ranging from land-speed racing to motocross to woods racing and everything in between. Special awards included AMA Athlete of the Year honors.The AMA Sportsman of the Year award was presented to World and AMA National Speedway Champion Billy Hamill. Hamill is not only a world-class athlete, winning at the highest level of his discipline, but in recent years he has donated his own time and resources to promote the sport of speedway racing to America’s youth.Bill Hamill says: “This is a very proud moment. I’ve been racing a long time and never won this award, so this is quite an honor. I would like to thank the AMA for recognizing my efforts and what I’m trying to do to promote American speedway. We do what we do for our love and passion for the sport of motorcycling.”The AMA’s highest competitive honors, the AMA Athlete of the Year awards, recognize a rider from each of the two categories of national championship competition: AMA National Championship Series and AMA Grand Championships.Taddy Blazusiak, the overall champion of the 2012 AMA EnduroCross National Championship Series, won the AMA National Championship Series Athlete of the Year award. Blazusiak–who is originally from Poland and resides in Murrieta, Calif., when in the United States–dominated the series to win his fourth consecutive AMA EnduroCross title. He has 27 career main event wins in AMA EnduroCross.Zach Bell won the AMA Grand Championship Athlete of the Year Award. Bell, from Cairo, Ga., was the AMA Motocross Horizon Award Winner in 2012, winning the 250 A class championship with a 1-1-1 moto finish.The AMA ATV Athlete of the Year Award was won by one of the most dominant riders in the history of ATV dirt-track competition: Harold Goodman. In 2012, Goodman successfully defended his Pro and Pro-Am national No. 1 plates in the AMA ATV Extreme Dirt Track National Championship Series. The Brownstown, Mich., resident won six of eight rounds in the Pro class and five of eight rounds in the Pro-Am class to repeat as double champion in the series.Molly Terry was the AMA Female Rider of the Year. At the 2012 AMA Dirt Track Grand Championships Terry, from Creve Coeur, Ill., was the 450 Modified Mile champion, beating many of the best male amateur dirt-track racers in the country. She also was the Women’s class grand champion at the event.AMA Veteran/Senior Rider of the Year was Kurt Nicoll. Nicoll, from Temecula, Calif., was the Vet 35+ Champion at the AMA EnduroCross Grand Championships.Adam Cianciarulo was the AMA Racing Youth Rider of the Year. The Port Orange, Fla., resident dominated at the AMA Amateur National Motocross Championship at Loretta Lynn’s last summer, winning the Super Mini 1 (12-15) and Super Mini 2 (13-16) classes.Sponsors of the AMA Championship Banquet included Artina Promotional Products, Barnett Clutches & Cables, Fly Racing, FMF, Galfer USA, Helix Racing, Matrix Racing Products and Traveline Travel.Other special awards included:AMA Racing Media Award
Motoplayground MagazineMotocross Organizer of the Year
Unlimited SportsOff-Road Organizer of the Year
Western New York Off-Road AssociationTrack Racing Organizer of the Year
Steve Nace Racing, Dirt TrackATV Organizer of the Year
Mid-America Cross CountryRecreational Road Riding Organizer of the Year
Motorcycle Sport Touring AssociationRecreational Off-Road Organizer of the Year
Tri-County MCAMA Club of the Year
Brandywine Enduro RiderssPress and Photo by the American Motorcyclist Association